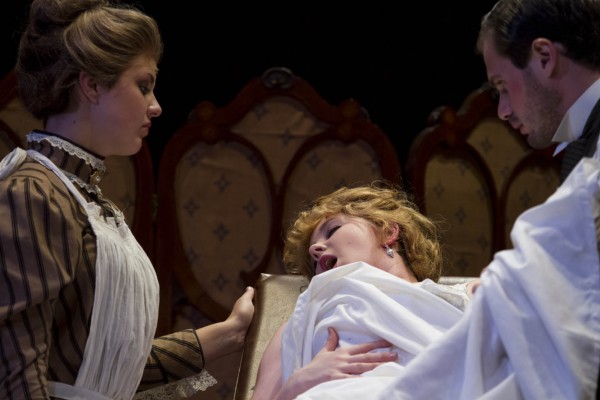 Admission is $6 for the general public and $3 for seniors and students. Tickets are available at batestickets.com. A panel discussion about issues raised by the play follows the Nov. 3 performance. For more information, call 207-786-6161.

However, “this is not a play about sexuality,” notes Vecsey, a senior lecturer in theater at Bates. Instead, Sarah Ruhl’s 2009 drama grapples with power dynamics within families in a way that speaks to contemporary audiences, especially our ambivalence toward marriage as an institution.

“It will challenge the audience to think about their own relationships — how they relate to their spouse, boyfriend, girlfriend, family or professional work,” Vecsey says. “You have to think about your own life as you watch this play.” 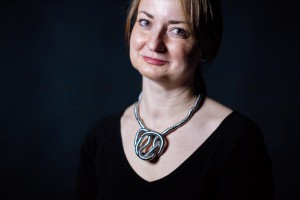 In the Next Room follows Sabrina Daldry, diagnosed with “hysteria,” and Catherine Givings, a restless wife looking for emotional communion with her husband and dealing with the inability to produce milk for their child. Their wet nurse, an African American woman named Elizabeth, challenges their understanding of race and attempts to enlighten them about female bodies.

“Catherine’s struggle to find a fulfilling relationship is timeless, as is the realization that love and marriage are difficult and take work,” says Singha Hon ’14, who plays Mrs. Givings.

The doctor is supported by his nurse, Annie, whose sexuality is unclear. Meanwhile, Mr. Daldry attempts to find a cure for his wife’s uneasy emotions. And through a visiting artist, Leo, the women learn more about the power and nature of sex and love.

In addition to Hon of New York City and Metzger of Wellesley, Mass., the cast includes Brittney Davis ’14 of Chicago, as Elizabeth; Liza Danello ’14 of Washington, D.C., as Mrs. Daldry; Charlie McKitrick ’14 of Norwell, Mass., as Mr. Daldry; Gunnar Manchester ’15 of Rehoboth, Mass., as Leo; and Audrey Burns ’17, of Topsham as Annie.

One reason Vecsey chose Ruhl’s play is that In the Next Room features five strong characters, enabling five of the Bates actors to fulfill thesis requirements for their majors in theater. The production also boasts elaborate sets and costumes reflecting the late 19th century.

The Sunday panel discussion will feature the cast, Vecsey and members of Bates student organizations supporting diversity and inclusion.