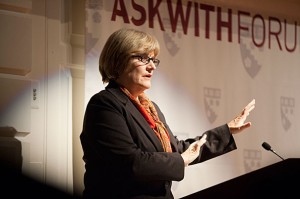 President Clayton Spencer returned to Harvard in October to reflect on a program she helped bring to life 10 years ago that draws local high-achieving, economically disadvantaged students to study at Harvard for six weeks each summer.

Harvard Crimson reporter Meg Bernhard notes that Spencer, former vice president for policy at Harvard, is often referred to as “the godmother” of Crimson Summer Academy.

The academy, she writes, provides students from low-income families “the opportunity to channel their academic ambitions and achieve their goals of attending four-year universities.”

Spencer says that the goal of the academy “is all about aligning the students’ ambition with opportunities.”

A related story in the Harvard Gazette quotes Bates student Andria Bhagwandeen ’15 of Boston, an alumna of the academy, who describes the moment when she knew she’d have to step up her academic game to attend college. 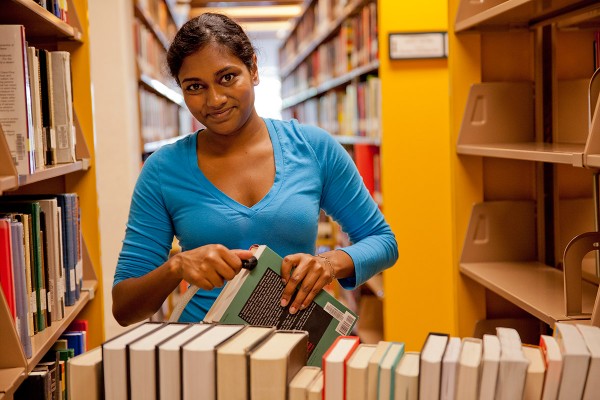 Andria Bhagwandeen ’15 of Boston is an alumna of the Crimson Summer Academy at Harvard. (Phyllis Graber Jensen/Bates College)

She’d been praised as “one of the best writers” in high school, but when Bhagwandeen arrived at the the Crimson Academy, she failed her first essay assignment three times.

“At that moment I realized how important CSA became to me in…shaping my academics. Quite honestly, I don’t know where I would have ended up if I didn’t come to CSA. It really paved a whole new way for me to go, and that’s what I’m really thankful for.”

There are three other Crimson Academy alumni now at Bates, and one graduated in 2013. And alumnus Ed Walker ’02, who founded the firm Independent Consultants of Education, offers college counseling at the Crimson Academy.