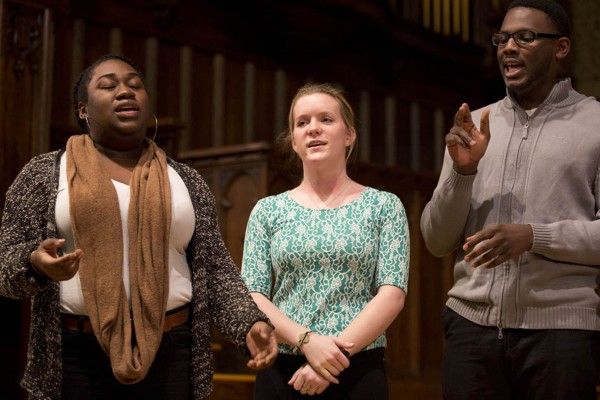 The Gospelaires, a gospel ensemble comprising members of the Bates College and greater Lewiston-Auburn communities, host a concert featuring a variety of guest artists at 3 p.m. Saturday, March 29, at the Peter J. Gomes Chapel, 275 College St.

Titled Celebrating God’s Gifts, the concert will feature singers from Bowdoin College, Christ Temple Church of Auburn and the Blessed Hope Tabernacle Outreach Ministries in South Boston, Mass. In addition to music, the program will include dance and spoken-word performances.

Admission is free, but donations support the All Nations Church of Lewiston, which is gathering resources to provide basic needs for incoming refugee families. For more information, please call 617-633-1471.

The event is a debut of sorts for the Gospelaires, who perform frequently at Bates events but until now, says President Cassandra Desrosiers, “have never had our own large-scale concert.”

“This will be the first concert hosted by the Gospelaires that will include collaborative performances,” adds Desrosiers. “It’s not just about the Gospelaires — we’re doing something to bring the Bates community and the surrounding communities together. That’s why I’m really excited about this event.”

The group’s music director is Stephen Saxon, associated minister of music at Bates. He was church pianist and choir director for the Brunswick Naval Air Station Chapel from 1999 until its closing in September 2010. A graduate of Bowdoin College, he is also a professional composer, producer, arranger and studio recording engineer.

A Bates senior from Boston, Desrosiers has sung with the Gospelaires since her first year at the college. “I came in when the Gospelaires were just forming. There were a number of students who were raised in the church and enjoyed singing gospel music because that’s what they were surrounded by at home.

“The Gospelaires were always fun because everyone was there really wanting to make the most of the time we had to sing and praise God together.”

Desrosiers herself is the product of a church-music background, and during visits home nowadays sings with the Blessed Hope Tabernacle group (she appears on a few tracks of the church singers’ new album, We Are All Here). Her brother, Jason Desrosiers, is a keyboardist for that church.

The Gospelaires, she explains, are driven as much by faith and fellowship as music. “We don’t audition anyone. If you want to sing for God, you can sing for God — that isn’t a thing based on your vocal ability.

“We started it as a fellowship-based group, Christian students coming together to sing praise and worship songs. So we still try to continue that foundation as we grow.

“There are different ways in which you can have your time with God. With such a busy academic culture at Bates, the Gospelaires, for many of us, are a way to share time with God in the simplest way we can: through song. He’s gifted a lot of us with singing and musical abilities, so it’s also a time to give back to Him through that gift.”

A double major in sociology and French, Desrosiers feels that the presence of a gospel group at Bates signifies something good about the college. “It speaks volumes being able to have groups on campus that represent a lot of different backgrounds and different interests.

“And I’m especially proud of what the Gospelaires are doing this year and with this concert, because it establishes in a stronger way that we’re here and we care about our community.”