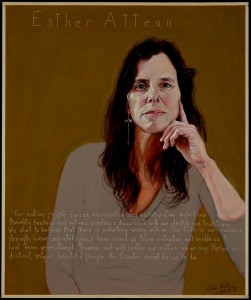 A portrait of Esther Attean by Maine artist Robert Shetterly, from his “Americans Who Tell the Truth” series.

Harward Center Civic Forums at Bates in October afford the opportunity to learn more about the role of immigration in Maine’s economy; and about a historic effort to redress problems created by government policies toward Native American children.

James Tierney, former attorney general of Maine and majority leader of the House of Representatives, gives a talk titled Immigration in Maine: Past and Future at 7:30 p.m. Monday, Oct. 20, in the Edmund S. Muskie Archives, 70 Campus Ave.

Both presentations are open to the public at no cost as part of the Civic Forum series presented by the Harward Center for Community Partnerships, the Bates office that connects the college and the
community in mutually beneficial ways. 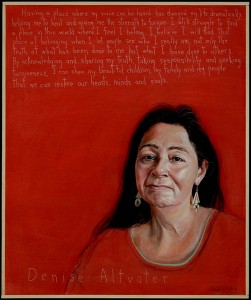 A portrait of Denise Altvater by Maine artist Robert Shetterly, from his “Americans Who Tell the Truth” series. Shetterly will introduce Altvater and Esther Attean (shown above) at a Harward Center Civic Forum.

The Oct. 1 forum will explore the recent formation of the Maine Wabanaki–State Child Welfare Truth & Reconciliation Commission, the first of its kind in the U.S. The commission was formed in response to the long and little-known history of state child welfare programs forcing the assimilation of Native American children into the dominant culture.

The commission aims to discover the truth about the experiences of Wabanaki people with child welfare programs, and to promote healing and lasting change. The five commissioners were seated last February and their work will continue until June 2015, when they will make recommendations based on their findings.

Joining Altvater and Attean as presenters will be Arla Patch, community engagement coordinator for the Maine-Wabanaki Reconciliation, Engagement, Advocacy, Change and Healing coalition; and Maine artist Robert Shetterly, who will introduce Altvater and Attean. Shetterly included the pair in his portrait series “Americans Who Tell the Truth,” depicting 200 individuals who have addressed issues of social, environmental and economic justice.

Starting in the 1800s, Wabanaki children in Maine were taken by the state from their families and communities and put into boarding schools or foster care to integrate them into the dominant culture. This policy stripped the children of their culture, language, family and community, losses still felt in Maine native communities today. 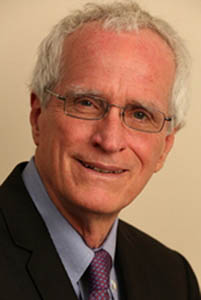 For the second October forum, Bates welcomes Tierney, Maine’s attorney general from 1980 to 1990 and a veteran of the Maine Legislature whose eight years in the House of Representatives included two sessions as majority leader.

With the aging of Maine’s population posing a threat to economic vitality, “we need more people,” Tierney told a University of Maine audience in a landmark 2002 talk about diversity and immigration that has become a standard reference for state and community leaders.

“We must see immigrants as an opportunity,” Tierney said. “California, Texas, New York, Florida, Arizona, Washington — the states that are our country’s engines of economic growth are culturally diverse.”

Tierney now serves as the director of the National State Attorneys General Program at Columbia Law School, where he has taught law since 2000. He also lectures at Harvard Law School and works as a consultant to attorneys general around the country, offering guidance on the effective performance of their office.

Tierney served as special counsel to the attorney general of Florida during the contested and still-controversial 2000 U.S. presidential election.