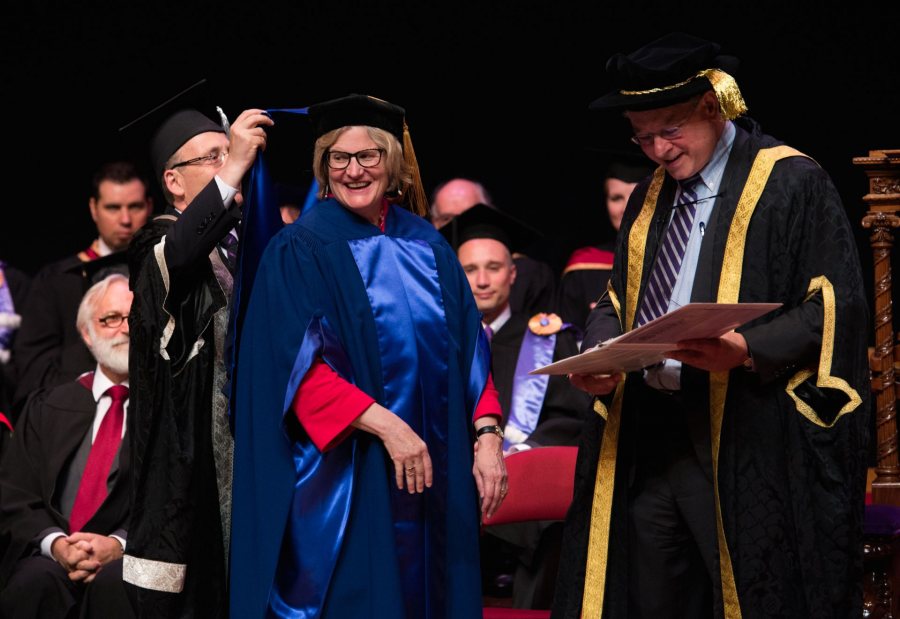 On June 6, President Clayton Spencer received an honorary doctorate in civil law from Bishop’s University in Sherbrooke, Quebec, an institution devoted to the “liberal education of undergraduates.”

Spencer appeared alongside Beverley McLachlin, the chief justice of the Supreme Court of Canada, and Louis Vachon, the president and CEO of the National Bank of Canada, both of whom also received honorary degrees.

Michael Goldbloom, Bishop’s principal and vice chancellor, said the trio were recognized at the university’s 187th convocation ceremony for their “outstanding professional achievements and service to society.”

In her remarks, Spencer likened the years immediately after college to a journey “into the woods,” with all the “adventure, danger, and uncertainty they represent,” and she suggested that the students’ liberal education had equipped them with “powerful tools of navigation” for their journey.

Evoking the values animating the Purposeful Work initiative at Bates — a tolerance for ambiguity, the imagination to see specific choices within a larger context, and the humility to reach out for help and solidarity at difficult moments — Spencer counseled students “not to panic early and grab for premature clarity at the expense of more durable meaning, which is different for every person.” Her invocation of Joseph Campbell’s famous dictum, “If the path before you is clear, you’re probably on someone else’s,” evoked nods of recognition and laughter from students and their families. 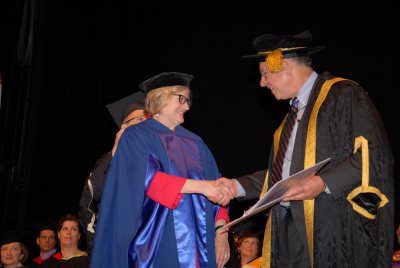 “At this early stage in your lives, the relationship between near-term choices and long-term meaningfulness is often … [not] clear,” she told the graduating class. “So the question is, how do you square the arbitrariness of your first step — or, for that matter, any given next step you may take along the way — with the goal of finding work over a lifetime that aligns with your deepest interests, brings you joy, and allows you to contribute to purposes larger than yourself?”

The key, Spencer said, lies in “the deep lessons of a liberal education,” which not only teaches you “‘stuff’ — biology, chemistry, economics, English, or whatever else you may have majored in” — but “also motivates and equips you to live an examined life, to ‘live with the question of how to live.’”

Bishop’s educates 2,200 full-time undergraduate students at its residential campus in Sherbrooke. Founded in 1843, Bishop’s is one of only three universities in the province where instruction is primarily in English. Spencer said she felt a strong kinship between “the culture and values of Bishop’s and those of my home institution, Bates College, in Lewiston, Maine.”

Spencer found another Bishop’s-Bates connection on stage during the ceremony. Fellow honorand Vachon, CEO of the National Bank of Canada, graduated from Bates as a member of the Class of ’83.