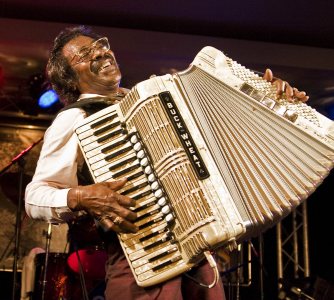 The great Buckwheat Zydeco performs at Bates on July 30.

NOTE: Because of inclement weather predicted for showtime, tonight’s Concert on the Quad at Bates will take place in the Gomes Chapel, 275 College St.

The Concerts on the Quad at Bates College resumes with the crowd-rousing zydeco artist Buckwheat Zydeco at 6:30 p.m. Thursday, July 30, on the Coram Library porch on Bates’ Historic Quad, College Street and Campus Avenue. (The rain site is the nearby Peter J. Gomes Chapel, 275 College St.).

Admission to this family-friendly series is free, and audience members are encouraged to bring picnics and chairs or blankets. For more information, please call 207-753-6953.

Widely regarded as the biggest contemporary zydeco artist in the world, accordionist-keyboardist Buckwheat Zydeco has introduced this upbeat blend of blues and traditional Creole music to audiences far away from its birthplace in Lafayette, La.

His energetic style has revitalized zydeco by drawing from mainstream genres like rock and R&B. Zydeco released the first-ever major label zydeco album in 1987, Island Records’ On A Night Like This, and has issued more than two dozen recordings since. Over the course of Zydeco’s career, he has gigged with everyone from Eric Clapton (with whom Zydeco also recorded) and U2 to the Boston Pops. 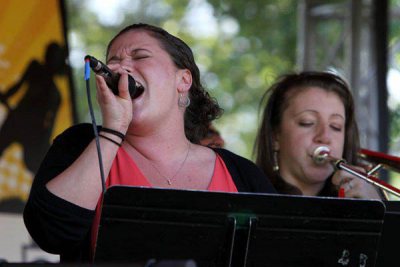 Hailing from Portland, Maine, Fogg is an experienced vocalist and an instructor at the Midcoast School of Music. Growing up listening to jazz and soul artists like Aretha Franklin, Otis Redding, and Etta James inspired Fogg’s love of singing from a young age.