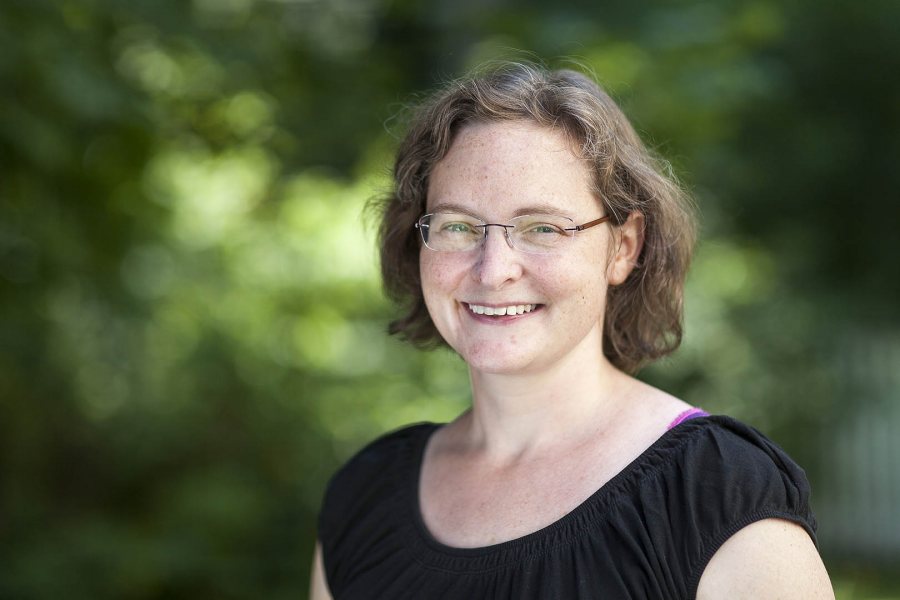 “I think that people often associate studying religion with practicing religion,” says Alison Melnick, “instead of thinking about religious studies in terms of understanding a cultural tradition or a society different from their own.”

But it’s in the latter sense “that religious studies is really useful for students, regardless of their major or what their interests are,” explains Melnick, who came to Bates in August as an assistant professor of religious studies.

Because religion is central to many cultures, “the important part of religious studies is to give students a sense of cultural sensitivity and cultural literacy” that will serve them both at Bates and thereafter.

Cultural literacy including media literacy, she notes — “helping students learn to critique what they see in the media, and to understand that there are impressions that they’re going to develop about religious communities that are very frequently skewed in one way or another.”

“We give them the tools to keep questioning what they’re exposed to.”

Melnick’s own academic experience demonstrates how powerful an exposure to unfamiliar cultures can be. She is a scholar of Asian religions — but she was a political science major when she signed up for the University of Michigan study-abroad program in China and Tibet that set her on her current course.

Thanks to that experience, “my entire concept of what I wanted to do with my life shifted,” she says. “In being exposed to and immersed in new cultures, you have opportunities to completely change your perspective.”

Melnick’s study-abroad group visited Tibet and Tibetan cultural regions in western China. The following year she had the opportunity to repeat the experience, this time working with faculty mentors who guided her in creating an independent research project.

“I was traveling to different nunneries and talking to Tibetan nuns,” she explains. “Learning about their daily lives, learning about what their religious practice was like, what their access to religious education was. It was really interesting.”

In turn, Melnick aims to involve her Bates students in independent research beyond the confines of campus. “I hope to take students with me into the field in the summer, or possibly Short Term, and work with them on research that I’m interested in, but also give them a chance to do their own research.

“The idea is bring several students with me as I travel to different monasteries or nunneries, introduce them to interpreters who might help them conduct interviews, and so forth.”

“I feel like Bates is just a great embodiment of the liberal arts.”

As a researcher, Melnick says, “I’m most concerned with bringing forth the story of women’s lives in the Asian religious world, specifically in the Tibetan and Chinese Buddhist worlds. Especially in the Tibetan tradition, we have a fair amount of unstudied texts about women within Buddhist communities. Sharing those stories is important to me.”

She adds, “I’m very interested in the role that gender plays in religious institutions and how gender dynamics affect the creation of those institutions” — and ideally, Melnick would love to collaborate with scholars investigating gender roles within other religious traditions.

A second research focus within Tibetan Buddhism is hagiography. “It’s this fascinating literary genre that talks about the lives of saints,” she explains, “but it incorporates historical material, it incorporates miracles, visions, dreams, and all sorts of other things.

“It’s one of the most prolific literary genres in Tibet. So it can be useful for us to understand Tibetan history, culture, society, and the evolution of Tibetan Buddhism.”

Melnick was excited to hear about the religious studies opening at Bates, a school she has admired for its senior thesis program, commitment to environmental sustainability, and especially quality of teaching. “I’ve been blown away by what I’ve heard about Bates — about how students and faculty engage with each other in the classroom and in independent research for students.

“I feel like Bates is just a great embodiment of the liberal arts.”

Melnick lives in Lewiston with her husband, Eric Dyer, who works for Whole Foods in Portland. They are avid paddlers, campers, and hikers, and Melnick also works with fiber as a spinner and knitter.