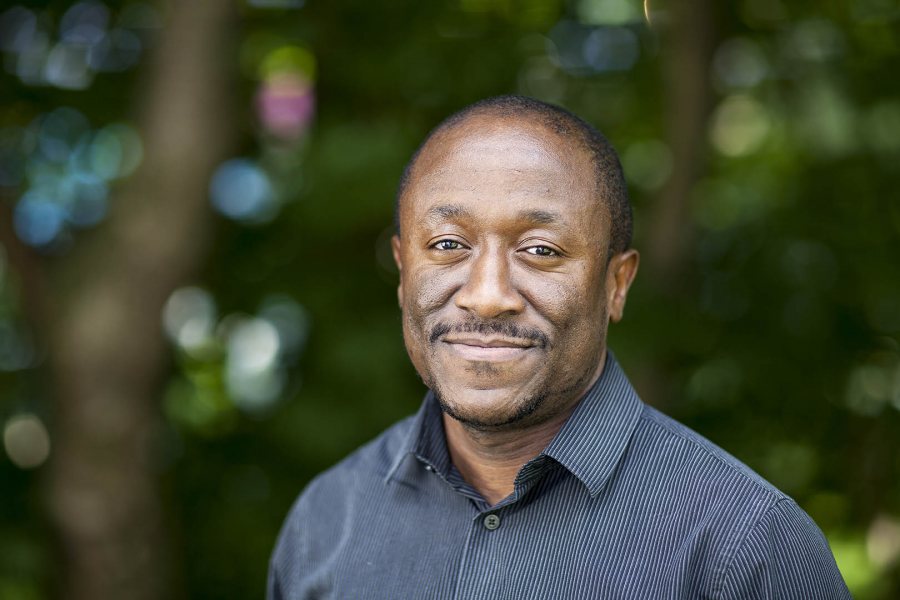 If you wanted a computer model that would precisely simulate the chemical behavior of a substance — say, coffee — you could have it.

But a model that performed a discrete calculation for every molecular change in even a microscopic amount of coffee would take serious computing power, explains Henry Boateng, who joined Bates’ mathematics faculty in August as an assistant professor.

And simulating the chemical activity in a whole cup of joe would be out of the question. “This is on the order of 1023 atoms,” says Boateng, pointing to a cup of coffee during a conversation in the Den. “And we can’t simulate that on a computer,” at least not without streamlining the process somehow.

But that streamlining is just what Boateng does.

A computational scientist, he designs algorithms, or sequences of computer operations, that dramatically speed up computer simulations and enable them to model large systems. With a doctorate in applied and interdisciplinary mathematics (University of Michigan, 2010), Boateng works on simulations in chemical engineering and materials science.

In his current research, he’s seeking more precise ways to model electrical charges at the atomic level. “If you describe the charge better, then our simulations will be more accurate,” he says.

His research has also encompassed models for the process of growing germanium crystals on a substrate of silicon — materials used in all manner of high technology, from LED lights to computer chips to photovoltaic cells.

“I’m not at the forefront of the product design,” Boateng says. “That’s the engineers and material scientists.” Instead, his interest lies in how math can be used to facilitate research in chemistry and physics.

His work often involves what’s called a Monte Carlo simulation — which, to drastically oversimplify, is a system for using randomly generated numbers to test the assumptions in a computer model. (The inventor of the Monte Carlo method, mathematician Slanislaw Ulam, named the process in honor of his uncle, who would borrow money from relatives to gamble at the Monte Carlo Casino in Monaco.)

“Bates has students you can learn from, who will push you.”

As a rough example of Monte Carlo: What if you need to know the area of a circle, but you only know how to calculate the area of a square? Boateng draws a circle inside a square, and then adds a bunch of dots to the diagram.

If you compare the number of the dots inside the circle to the number outside it, you can then run that information through some simple calculations to estimate the area of the circle.

“You have to do it several times to get it perfect,” Boateng says. “But this is the simple idea, and it’s just random numbers.”

He is married to Francesca Kaglar-Boateng and they have a son, Aiden. In his spare time, in addition to reading and film, “I follow all sports,” Boateng says. “I only play soccer and some tennis, but I follow most sports except for maybe NASCAR — but even NASCAR, I can talk to someone about it.

Boateng, a native of Ghana, came to the United States to attend the Mississippi University for Women (co-ed since 1982), where he earned a bachelor of science degree in chemistry and mathematics. He received a master’s degree in physics from the University of Michigan.

Prior to Bates, he served as a computational scientist at the STFC Daresbury Lab, Daresbury, Warrington, in the UK; and taught at the University of Akron, in Ohio.