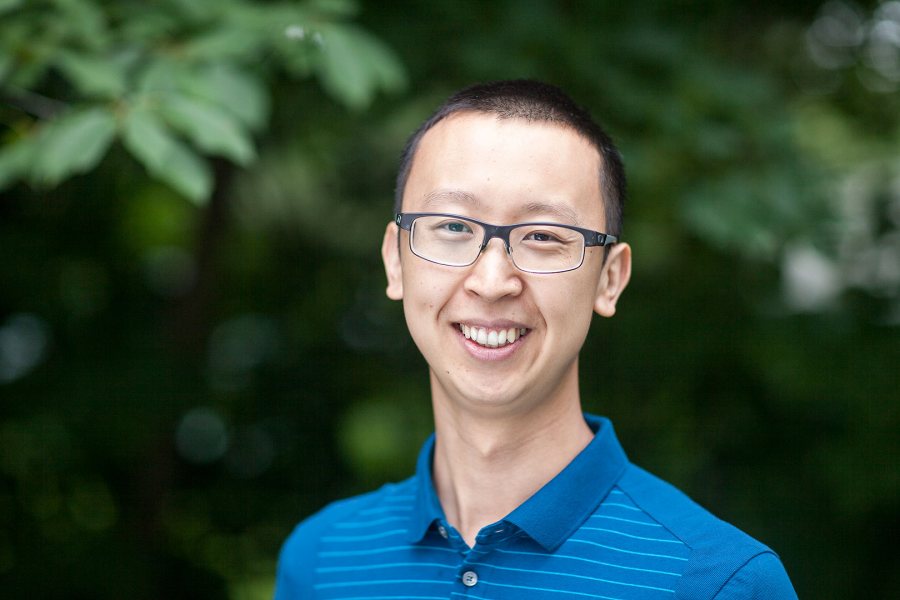 Data must be collected and data must be analyzed. But economist Leshui He believes that his field traditionally gravitates more to the latter than the former. And he’d like to see that change.

“It’s surprising, actually, how much work has been done in developing techniques to dig out more information from the same set of data,” he says. “I was once very interested in these things.”

But nowadays He, who started at Bates in August as an assistant professor of economics, is more interested in practicing economics the way natural scientists do their work.

“For instance, my friend in nutrition science will run an experiment for two years and analyze the data two months,” he says, “whereas an economist will get data in half a month — or even, for publicly available data, a week — and analyze it for a year or two.”

Professor He comes from Kunming, China, and has lived in the United States since 2006. He earned a bachelor’s in business administration from the Beijing University of Aeronautics and Astronautics, but his first love was for information technology and computer science.

His interest in working with data and mathematical models steered him toward economics, and He received his doctorate in the field from the University of Connecticut in 2013.

“So far I’m still pretty happy about the decision,” he says.

A microeconomist, He has researched the economics of law and organizations, particularly corporations. A 2014 paper that he has submitted to the Journal of Law, Economics, and Organization transfers the traditional manufacturing model of “make or buy” — today Apple makes its own glass iPhone screens, but it used to buy them from Corning — to professional services.

In other words, the research explores the business advantages of contracting for, say, legal or marketing services rather than handling those services in house. (A major advantage, He explains, is that the senior members of outside firms more effectively facilitate interactions between their subordinates and their clients.)

He is increasingly studying economic issues peculiar to developing countries. And China is a strong focus. Currently He is exploring peer effects in education in China — that is, how the academic success of students is affected by the academic abilities of the students around them.

Part of economics’ appeal, He says, is the broad applicability of its methodological toolkit.

“This is very interesting, because in the U.S. there are a lot of discussions about peer effects in student achievement,” He says. “For instance, if a student is sent to a class that has better peers, will that improve his achievements?”

He is working with data from a Chinese middle school (for ages 12–15) that educates more than 4,000 students divided among three grades, each of which is divided, in turn, into 24 academic classes — “class” in the sense of a ranking, not a course. A student is assigned to one of those classes on the basis of admission test scores.

“The students are always in the same class, always interacting with the same peers,” He explains. “They don’t swap classes and work with other people.

“My experiment is with two very similar students at the beginning of the seventh grade. I have their exam data and background data all the way to ninth grade. From there, I’m hoping to learn a lot about how the characteristics of their peers and classmates affect their achievements.”

At Bates, economics is typically one of the three most popular majors (vying with psychology and politics). How does He explain economics’ appeal?

Part of it, he says, is the broad applicability of economics’ methodological toolkit. “It’s pretty cool, because it gives you all sorts of freedom. From a career development perspective, it doesn’t matter which particular industry you get into, you’ll be able to make use of economics techniques.”

He adds, “I think economics has an advantage in that it’s very connected to what’s going on in society.” He explains that modern economics takes as its research subjects realms of human decision-making that go way beyond monetary decisions.

“You can pretty much write about anything. It’s fantastic.”

He met his wife, Mengxi Ying, who is also from China, at the University of Connecticut. “We met on the other side of the world” from home, he says. “It was actually quite nice to meet my spouse in grad school. We would never have met if we hadn’t come here.” They have a 3-year-old daughter.

Why Bates for Leshui He? “My department colleagues are wonderful,” he says. “When I visited Bates, everyone I met was so friendly and smart. That made me really want to be a part of Bates.”