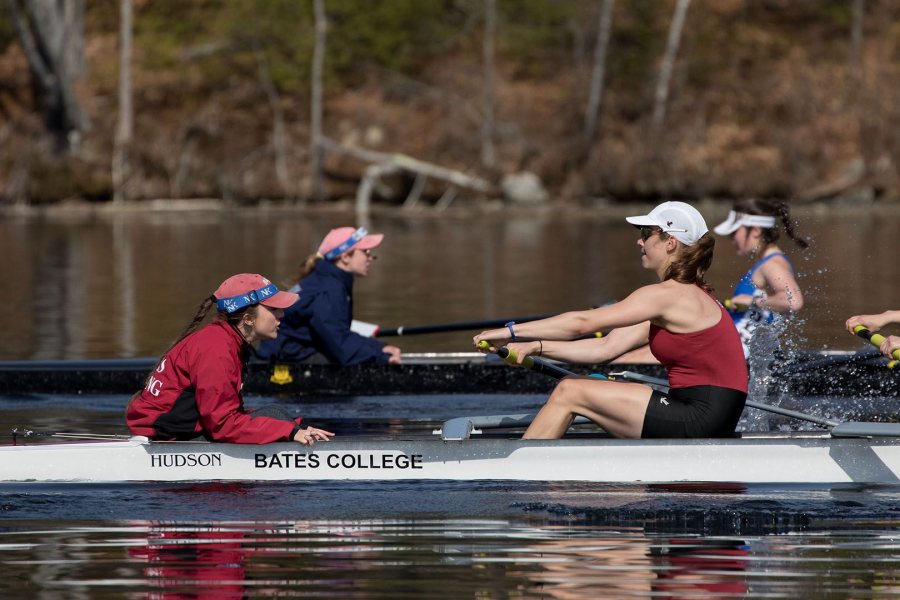 After winning the April 17 President’s Cup, their signature home regatta, the Bates rowers joined a groundbreaking ceremony for their new boathouse on the Androscoggin River. (Photograph by Connor Cahill ’17)

On and off the water, Bates rowing had a winning day on April 17.

After sweeping all races vs. Bowdoin and Colby in the President’s Cup, their signature home regatta, the men and women of Bates rowing joined families, alumni, friends, and college leaders at a groundbreaking ceremony for the program’s new boathouse on the Androscoggin River in Greene.

“What a great way to spend a gorgeous Sunday,” said President Clayton Spencer in her welcoming remarks, “by watching our extraordinary athletes and celebrating the start of construction on a new home base.”

Donor-funded construction “is no small thing,” Spencer told the gathering. “It matters hugely.”

Announced by the college in fall 2014, the boathouse project will be 100 percent funded by contributions from Bates alumni and parents. Construction, which got going the day after Sunday’s regatta, is scheduled to be finished by the fall.

A donor-funded facilities project “is no small thing,” Spencer told the gathering. 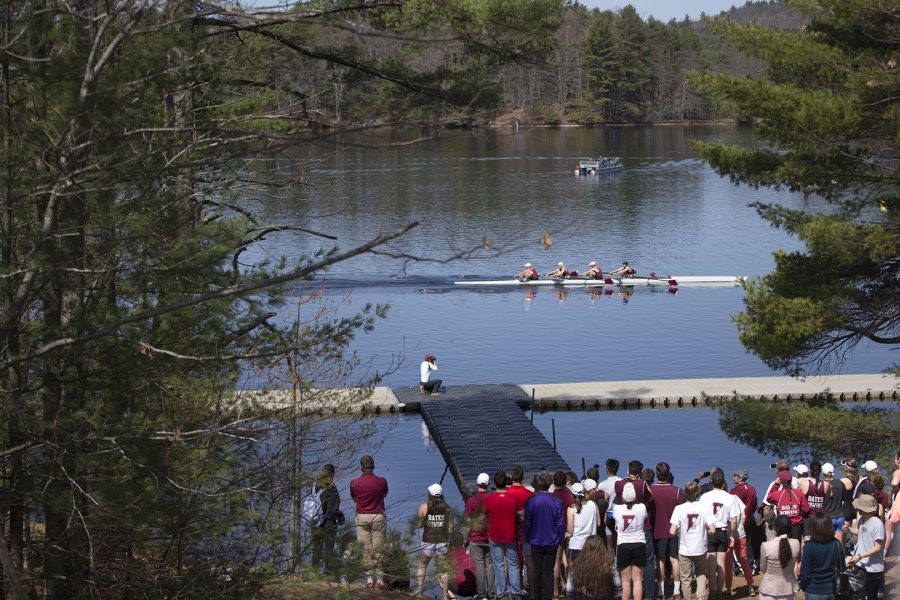 Reflecting on the Sunday’s events, head coach Peter Steenstra says that “Sunday was a fantastic day. Rowing is off the beaten path, literally, and so it meant a lot to the rowers that so many people turned out for the regatta and the ceremony.”

He explains how he sees the new boathouse — which replaces a rustic, pole-framed barn — fitting into a program that has surged to national prominence in recent years.

The Bates women won the 2015 NCAA championship and the men took their first NESCAC title. On Sunday, Bates won all 10 President’s Cup races.

Bates took on Colby and Bowdoin in the President’s Cup Regatta, and it was a feast on and off the river.

“A new facility doesn’t change who we are as a program,” he says, “but it will change how we get better: by removing obstacles” — like not having locker rooms or a team room.

In other words, he says, the new boathouse “will only change us for the better.”

The old boathouse, designed by Bates Facilities, dates to 1988, and Steenstra has nothing but respect for a building that served the team, year after year.

“That was our pole-barn temple,” says Steenstra. “It’s like a home or a church: You make of it what you can. It doesn’t have to be ornate.”

The boathouse, he adds, “served its purpose as a place where we did our work. And we loved every part of it — including the chipmunks and raccoons.”

Gaffney ’67, peak performance coach, up next in ‘Purposeful Work Unplugged’