Bates to build new rowing boathouse on the Androscoggin River

Bates College will build a new boathouse at the varsity rowing team’s facility on the Androscoggin River, President Clayton Spencer has announced.

At an estimated cost of $2.5 million, the boathouse project will be 100 percent funded by contributions from Bates alumni and parents. 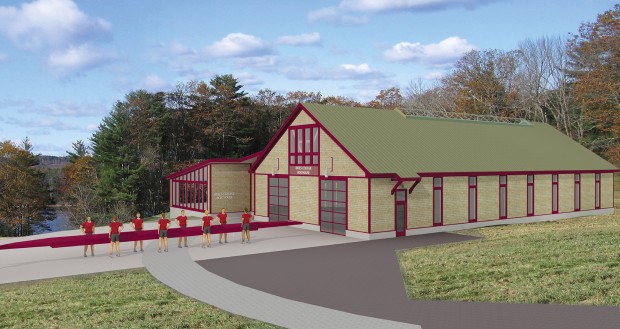 Subject to revision, this preliminary conceptual study shows the new Bates College boathouse to be built at the team’s practice facility on the Androscoggin River in Greene. (Courtesy of Peterson Architects)

“The goal at Bates is to deliver the best possible liberal arts experience for our students,” Spencer says, “and athletics is integral to this experience. Our student athletes train and compete at an elite level, so it is important that they have access to facilities that support a high standard of quality and competitiveness.”

“Appropriate for the level of athlete who wants to attend Bates College and compete as a Bates rower on the national stage.”

“It is hard to fully express what this does for our rowing teams,” says head coach Peter Steenstra. 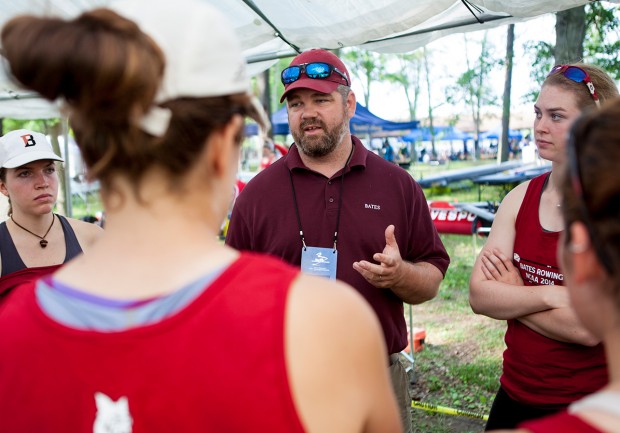 “It is hard to fully express what this does for our rowing teams,” says head coach Peter Steenstra, seen here with Bates rowers at the NCAA Rowing Championships on May 30, 2014. (Sarah Crosby/Bates College)

Head coach since 2009, Steenstra guides a rowing program that has achieved national prominence in recent years, including a victory by the Bates women on Oct. 19 at the Head of the Charles, the world’s largest fall regatta.

“This new facility will be appropriate for the level of athlete who wants to attend Bates College and compete as a Bates rower on the national stage,” he says.

Construction at the Bates rowing facility, about 7 miles north of campus in Greene, will begin in summer 2015, with the new boathouse scheduled to be ready for use by fall 2016.

Oriented for optimal solar exposure, the 7,500-square-foot, one-story building will have boat storage space, locker and shower facilities, a team room with ergometers, and office space.

Bates has selected Peterson Architects, a Cambridge, Mass.-based firm specializing in boathouse design, as project architect. Henry Gillert of Bates Facility Services will be project manager for the college.

That the project is donor-funded sends an impressive message, Steenstra says. “When a group of people sees the value of this program and literally invests in it in order to ensure that it’s here for the future — that’s powerful.”

The decision to move forward with a new boathouse also acknowledges that the college’s existing facility has reached a tipping point, he adds. 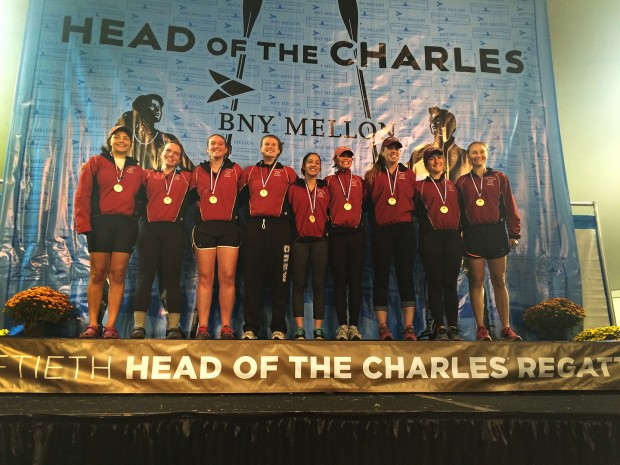 The women’s varsity eight basks in the glow of victory following its win in the Women’s Collegiate Eights at the Head of the Charles Regatta on Oct. 19, 2014. (Photograph by Andriel Doolittle)

The new boathouse will replace a pole-barn structure built in 1988 with dirt floors and no electricity. Despite the rustic facility, Bates rowing has achieved national prominence in recent years, and while the spartan aesthetic has fostered camaraderie and a healthy work ethic among Bates rowers, its deficiencies now outweigh its charms, Steenstra says.

Today’s Bates College rowers “operate above the level of what we have provided,” he says.

Often ranked among the best college teams in the country, the Bates women rowers have been a major force at the NCAA Championships, posting runner-up finishes five straight years, 2009 to 2013. The team’s victory in the Women’s Collegiate Eights race at the Head of the Charles was equivalent to a fall national championship, Steestra says.

The men’s team has finished in the top three in NESCAC four years running, and earned a silver medal at the ECAC National Invitational Rowing Championships in 2012. (The NCAA does not offer a championship regatta for Division III men.)

Other markers of success include competing at the 2009 Henley Royal Regatta in England and having two alumni compete as Olympians: Andrew Byrnes ’05, who won gold as member of the Canadian men’s eight team in 2008 and silver in 2012, and Mike Ferry ’97, a U.S. Olympian in 2000.

“Another example of our increased momentum in fundraising.”

“The new boathouse is made possible through a number of generous pledges,” says Sarah R. Pearson ’75, vice president for college advancement. “We fully expect to complete the final phase of fundraising by Dec. 31, well before the start of construction.”

Donor response to the boathouse project “is another example of our increased momentum in fundraising,” Pearson adds, following “last year’s total of $16 million in gifts to the college,” a 33 percent increase over 2013 and the college’s most successful fundraising result since 2006.

Funding secured in 2013-14 included the Catalyst Fund, a multiyear gift from current and past members of the Board of Trustees.

Catalyst Fund resources are now supporting institutional priorities within the Division of Natural Sciences and recent curricular innovations, including new Practitioner Taught Courses and Course (Re)Design projects, in which faculty and students collaborate to design new courses or rework existing ones. Catalyst Fund resources will also allow Bates to pursue new initiatives in the Engaged Liberal Arts over the next three years.

Additionally, the Catalyst Fund is supporting the design and early implementation of the Purposeful Work Initiative as well as financial aid and programming support for diversity and inclusion under the leadership of Associate Vice President and Chief Diversity Officer Crystal Williams.