Video: Audubon’s ‘Birds of America’ lands at the Bates library 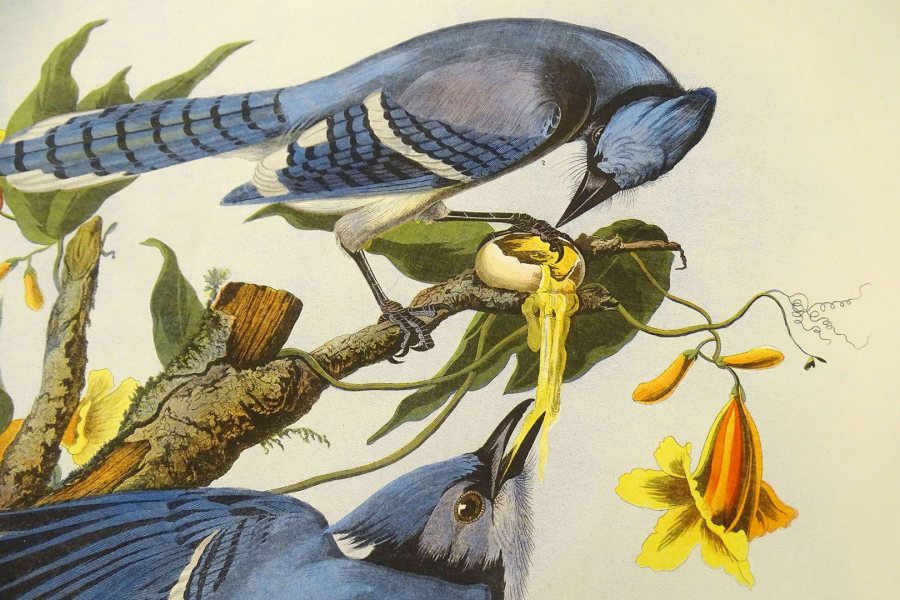 This detail of the bluejay plate from The Birds of America shows what its creator called the “rogues” and “deceivers” of the bird world.

Bates gave special attention to the April 26 birthday of ornithologist, naturalist, and painter John James Audubon by wheeling out the library’s volume of Audubon’s masterpiece, The Birds of America, for rare public exhibition.

Birds of America is on display in Ladd Library through May.

Known as the “Bien” edition, after the chromolithographer responsible for the images, the volume is huge — 57 pounds, with each page measuring 39 1/8 inches by 26 1/8 inches. Its Bates provenance is equally outsized.

In fact, it belonged to Jonathan Y. Stanton, one of the college’s first professors and a major influence on Bates traditions and teaching from his appointment in 1863 until his death in 1918, after which his prodigious library was bequeathed to Bates.

A tour of the bluejay plate from Birds of America:

“When the Bates mission statement talks about ‘educating the whole person,’ it’s talking about formative teachers like Stanton,” says Pat Webber, director of the Muskie Archives and Special Collections Library.

Aside from Bates founder Oren Cheney himself, there was no more revered figure in the first century of the college than Stanton.

The centennial of his birth, for example, was a lavish affair, complete with a special edition of what was then called The Bates Alumnus, now Bates Magazine, as well as a series of observances at the 1934 Commencement.

“He was engaged with the whole campus and with everyone at Bates,” Webber says. “He was a polymath who taught Greek, Latin, ornithology. He founded Bates debate. He created the Freshman Ride — orientation, really — to help students learn about the area. He loved sports. He was the first librarian, and because of his fame as a birder, the Stanton Bird Club in Lewiston carries his name.”

Rarely quoted, and not one for the alumni club circuit, Stanton did speak at a Bates event in Hartford in 1909, and he opened with this telling remark: “I have not come here as a representative of the college, but to be with you, to see you, and to hear you.”

The Birds of America lands at Ladd library:

Moving Birds of America from its secure storage to public display on the library’s first floor was a two-step process. First came the distinctive display case, an early work by Thomas Moser, the famed cabinetmaker and former Bates rhetoric professor.

Then came the book, placed next to the library’s imposing portrait of Stanton himself. Webber, along with Laura Juraska, associate librarian for research services, handled the duties.