Will your Napkin Board query make the cut? 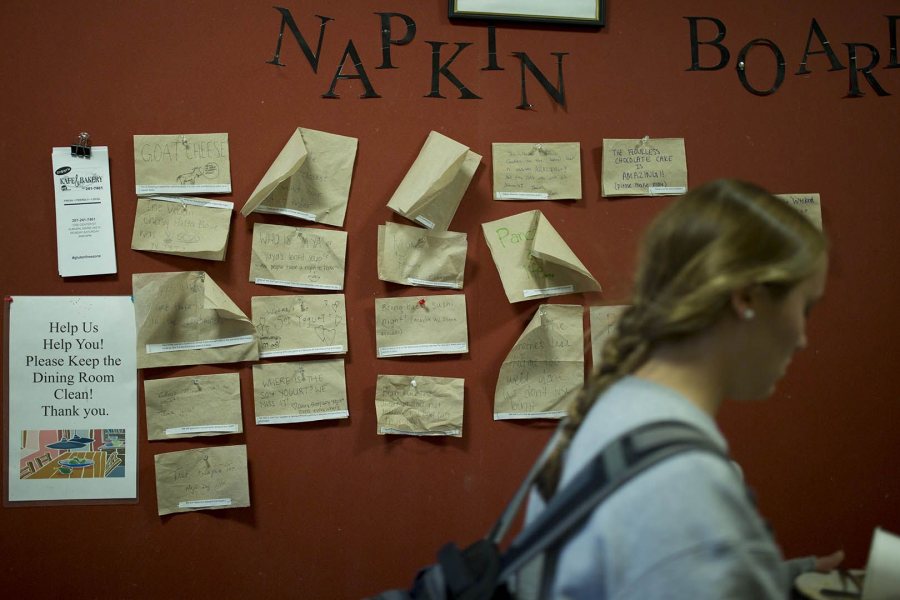 Leaving Commons, students can test their luck and make food requests on a napkin that they tack to a Napkin Board. (Phyllis Graber Jensen/Bates College)

The fate of Commons food just might lie on a small, crumpled napkin.

That’s because Dining Services has elevated the lowly paper napkin to a more consequential role: After breakfast, lunch, or dinner, students can test their luck and write specific food requests on a napkin that they tack to a large bulletin board near the Commons exit.

Director of Dining Services Cheryl Lacey, who has overseen the Napkin Board for years, says that student comments tend to fall into three categories: requests for specific items; complaints and questions about particular policies or dishes; or kudos for different dishes or for the Commons staff in general.

“Lately we have received both compliments on and requests for even more quinoa, kale, soy, and other healthier options at all stations,” says Lacey. “We also have received questions about what happens to leftover food or food left on plates and dropped at tray return.”

Once a week, new napkin suggestions are taken down from the board, then reappear days later, along with a response — often sardonic and comical — that reflects a complex behind-the-scenes review process. 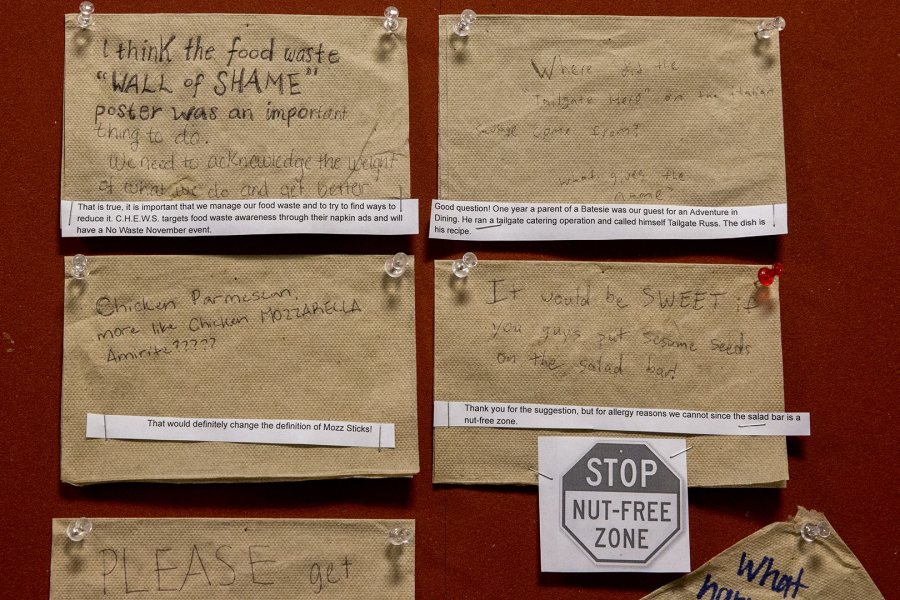 The Napkin Board with updated responses from the anonymous respondent. (Phyllis Graber Jensen/Bates College)

Lacey divides the napkin messages (both the physical ones and the one posted online) by area of responsibility. For example, napkins that address specific menu requests are taken up at a weekly menu committee meeting. She also gets input from the student Food Advisory Committee and considers data from the production sheets generated by the menu management system.

She also checks with the various Dining Services managers, whose job it is to check temperatures and evaluate food at every meal. As if that’s not enough, Lacey also shares the napkins with the college’s Dining, Conference, and Campus Event management staff for input.

Several napkins with similar requests are taken very seriously but frequency isn’t the only thing that affects the final decision. 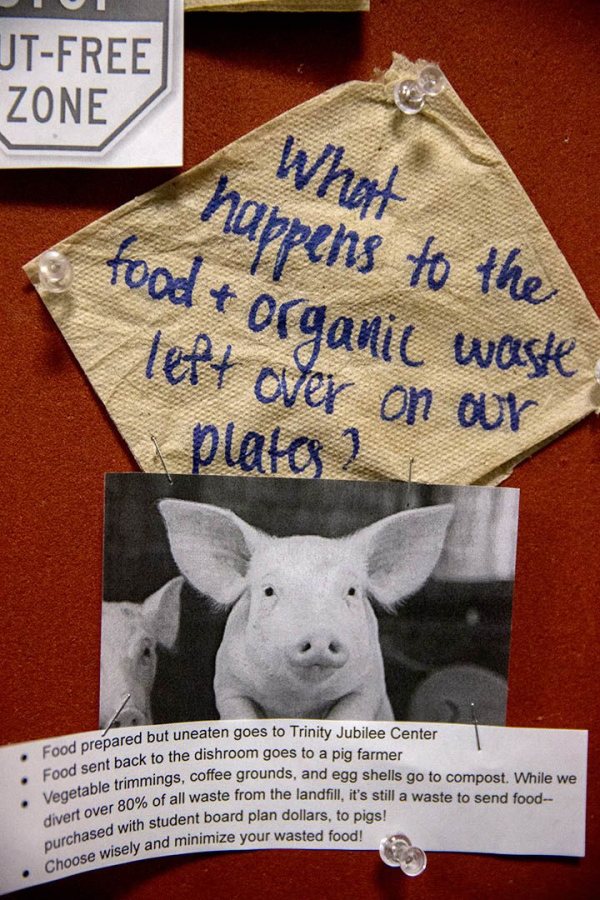 An example of a response from the respondent that provides an informative response to a question rather than a witty remark to a request. (Phyllis Graber Jensen/Bates College)

“Financial impact, labor intensity, availability, and sustainability all play a part,” Lacey says, who adds that she is “partial to those napkins that feature a little art or healthy dose of humor.”

When a decision is reached about whether or not the student’s request can be granted, Lacey delivers a short answer — yes, no, maybe — to the anonymous Napkin Board respondent, who prepares a draft answer for Lacey’s approval.

“Most of the time, I don’t change anything on the answers,” she says. “But if one of them seems to cross the boundaries of appropriateness or accuracy I will send back an edit.”

It’s part of the board’s tradition — which dates to the 1990s — that “the identity of the Napkin Board respondent is kept secret,” Lacey explains. “If I told you who it was I’d get into a lot of trouble.”

The respondent’s answers can either be rather nice and to the point, or extremely sassy and amusing.

Once, when a student tried asking for a fresh fruit smoothie bar, the respondent rejected the request  this way: “Commons is BYOB (Bring Your Own Blender).”

But hey, it never hurts to ask. And maybe your napkin will be a lucky case that passes the taste test.

This is an updated version of a story that Sarah Rothmann ’19 of Andover, Mass., first reported for Batezfeed, created by students in “Journalism in an Age of Media Explosion,” a Purposeful Work practicum taught by Peter Moore ’78 last Short Term.