A day before the election, the Bates politics department announced that it would offer a postmortem on Wednesday, Nov. 9.

And they couldn’t have picked a better title for the event: “What Just Happened?”

Those were likely the first words in households all over America Wednesday morning as both friends and foes of President-elect Donald Trump absorbed the news of his upset victory.

At midday, four members of the politics faculty propped their sleep-deprived eyes open for an hour to offer insights about the election and some predictions about U.S. governance under Trump. 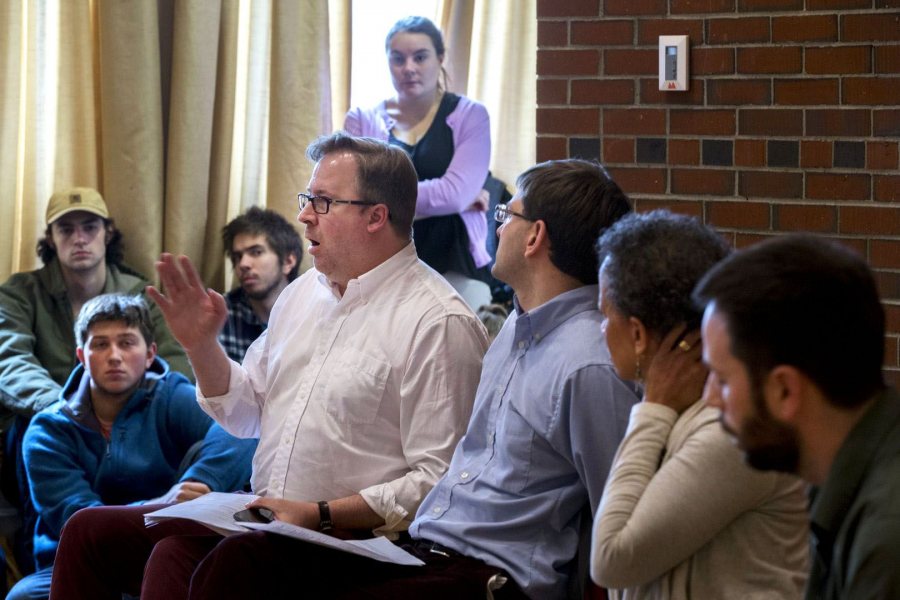 John Baughman, an associate professor of politics, speaks during the Wednesday discussion in the Mays Center. (Phyllis Graber Jensen/Bates College)

Concern evident in their faces and postures, about 200 students, staff, and faculty filled the Benjamin Mays Center to hear what John Baughman, Ben Moodie, Leslie Hill, and Will D’Ambruso thought about the outcome. In question-and-answer form, here are some takeaways:

Baughman, associate professor of politics and an occasional commentator for the news media, listed factors that the pundits didn’t see or couldn’t have seen.

He described some regional variations from past voting patterns, such as a strong showing for the Democrats by Latino voters that continued a recent trend — but that was offset by a surge, unforeseen by pollsters, in white working-class voters with less than a college education.

More culturally significant, perhaps, was Baughman’s observation that campaign organizations and their get-out-the-vote efforts in some ways “seemed not to matter” in a  presidential campaign driven less by party organization and affiliation and more by raw emotion. 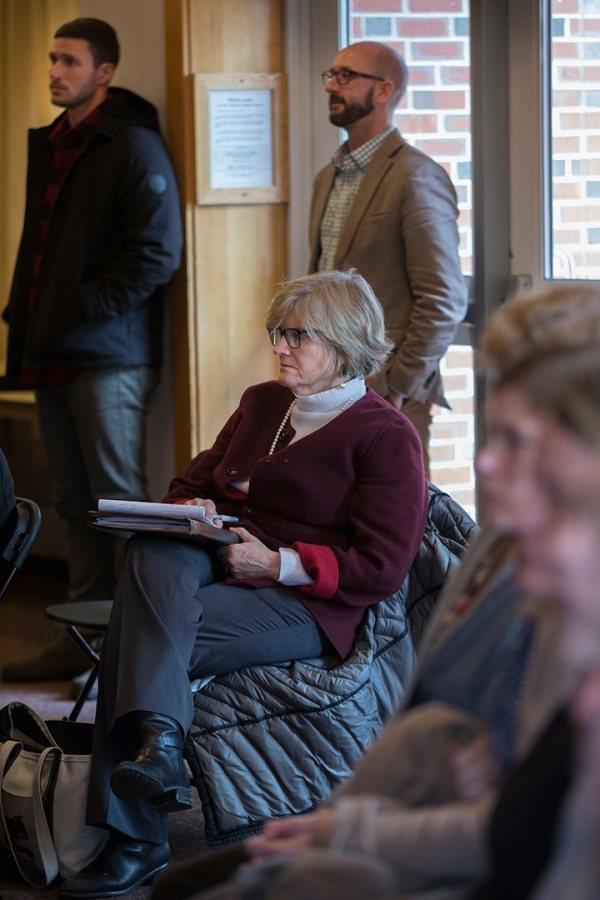 Baughman said that this was “not an election that seemed to turn primarily on debates over key policy choices, the way that we’ve seen in other elections.”

Instead, “policy took a back seat to other kinds of debate and rhetoric” that appealed to voters’ anger and fears. He also noted that racial and ethnic animus was “a key factor” in the outcome, and suggested that the rhetoric of prejudice, now embedded in mainstream political discourse, will be hard to remove.

“This is one of the most troubling aspects of this election, and something we’re going to be responding to for a while yet.”

Baughman added, in response to a question near the end of the gathering, “You can’t just turn off divisive, racist campaign rhetoric.” Washington will find some way to govern, but hate rhetoric has been legitimized.

If the economy was not a dominant theme in this election, Baughman did note that “changes in partisanship over time map very directly onto changes in income inequality.”

The overriding message from Baughman was that the U.S. has arrived in something like political terra incognita. “The establishment has been repudiated,” he said, especially within a Republican Party divided over Trump’s candidacy. “But it’s not clear yet what the alternative is.”

With the White House, Congress, and in all likelihood the Supreme Court in conservative hands for years to come, how can liberals have a meaningful voice in policy-making?

Activism at the local level is imperative, the panelists agreed. Especially so, as Baughman noted, because the Democrats have for years been hobbled by a shortage of strong candidates emerging locally and working their way up to regional and national influence.

“It’s up to people outside the political institutions to push for these sorts of things,” said Leslie Hill. “The other piece is us in the community and the ways in which we can figure out how to go forward. We have the vote, but we also have other ways of engaging politically, and that’s really important.”

What are likely economic effects of the election? 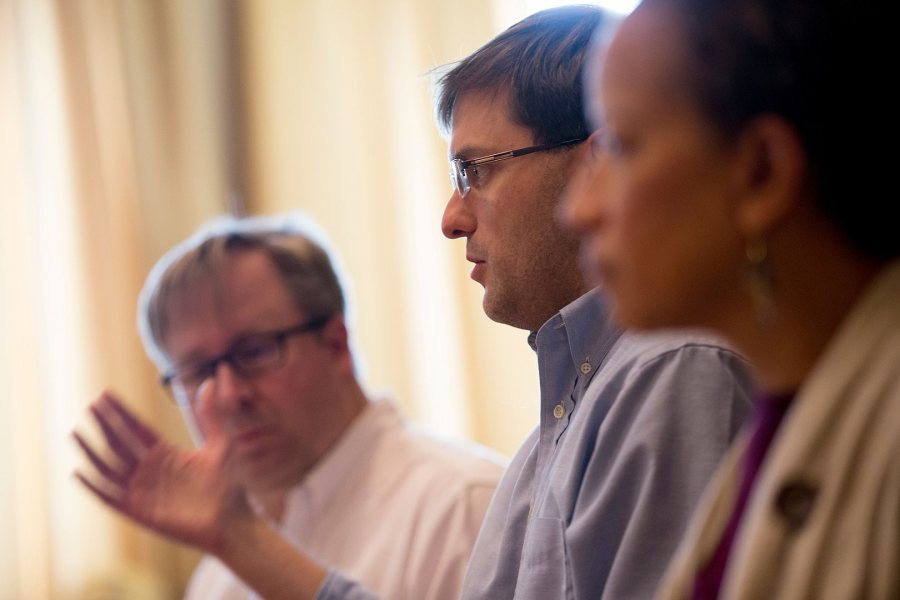 Ben Moodie, lecturer in politics and sociology, explained that during the campaign, Trump made evident his lack of interest in policy details. That puts “congressional conservatives in the driver’s seat” when it comes to federal finances — and between big tax cuts for the wealthiest and expanded spending on infrastructure and defense, the national debt is likely to balloon.

Such deficit spending would be good for economic growth given current conditions, Moodie said. Although more-progressive tax relief would be better economic medicine, more government spending — whatever the money is spent on — could nevertheless boost the national economy.

Funding for liberal priorities is certainly threatened. While the panel didn’t agree on the feasibility of repealing the Affordable Care Act, it will be pruned, perhaps drastically, as will Medicaid and other benefits for the poor. However, Moodie predicted, Social Security and Medicare will likely be spared.

What are the election’s political implications for women and for minorities? 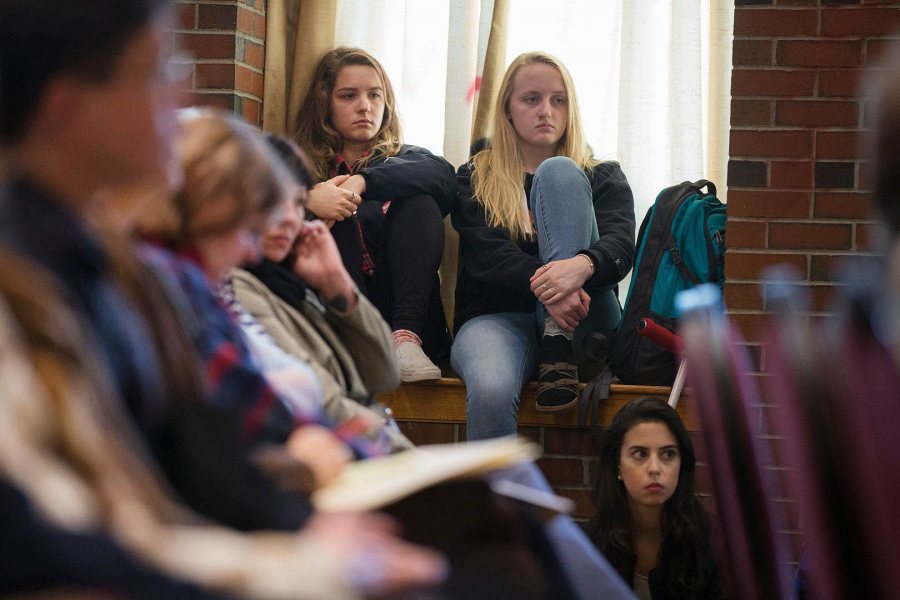 Echoing Baughman’s concern about racist campaign language, Hill wondered if misogyny has become “the new normal” in political discourse. For young women in the room, she said, the 2016 races must have been a devastating introduction to political participation in both tone and outcome.

Hill shared a quote from a Nov. 9 article in The Guardian: “Faced with the choice between a qualified woman with flaws and a man who had lied, evaded taxes and faced many sexual assault allegations, voters chose the man.”

Hill looked briefly at some demographic trends in the election. She noted that while Latin women and Asian–Pacific Islanders (men and women) voted in numbers roughly matching the past two presidential elections, their support for the Democratic candidate this time was less.

In terms of gender equality in political representation and especially leadership, the nation was trailing its economic peers when it entered the 2016 election, Hill said — and the events of Nov. 8  didn’t helped. She pointed to the U.S. Supreme Court’s evisceration of the Voting Rights Act, which has materially affected access to the polls for African Americans and other minorities.

“I can only imagine what John Lewis must be saying,” said Hill, referring to the civil rights and VRA advocate who offered Bates’ Commencement address in May.

Hill said that the prejudice and hostility unleashed during the 2016 campaign “may come down to people’s everyday lives. It worries me.”

Trump’s temperamental unsuitability to be in charge of the U.S. nuclear arsenal was an issue during the campaign. Should we be worried? 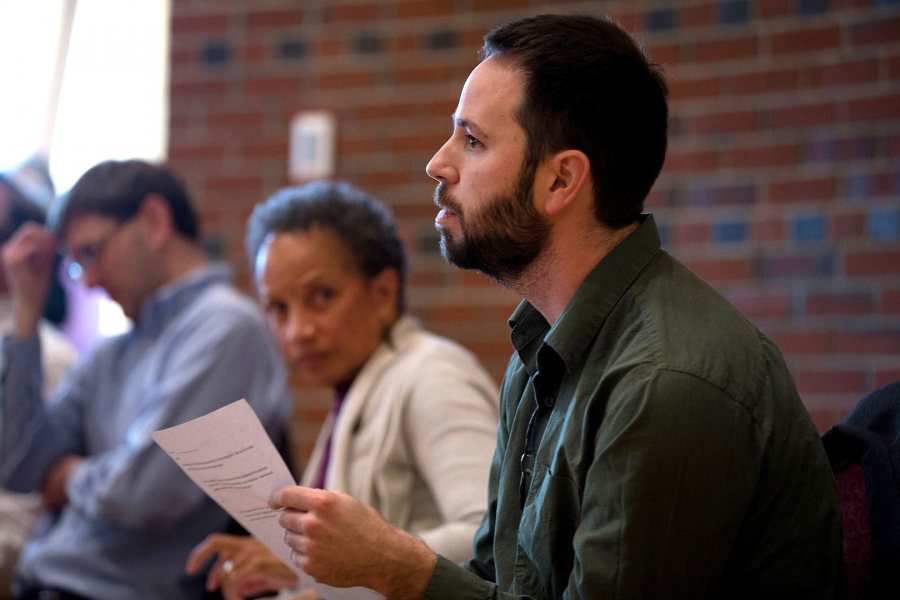 Lecturer in Politics Will d’Ambruoso opened his segment with the laugh line, “I’m going to talk casually about armageddon.” But the outlook for Trump as commander in chief, he indicated, is actually complicated and hard to predict.

Seeking to reduce U.S. costs for defending its allies, Trump has supported opening the nuclear club to nations like South Korea. The question is, will more nuclear arsenals around the globe result in stronger deterrence and more stability, or the opposite — especially since the international commitment to keeping nukes out of the wrong hands is not ironclad?

On a different front, d’Ambruoso suggested that Trump’s ties with Russian leader Vladimir Putin could actually reduce international tensions — “but human rights will be the loser,” he said.

D’Ambruoso summed up the uncertainty of Trump’s international role when he started an answer with, “I’m not exactly sure” but then added with a chuckle, “Well, of course I’m not sure!”

How will a Trump administration affect local law enforcement in terms of police misuse of force against blacks and others? 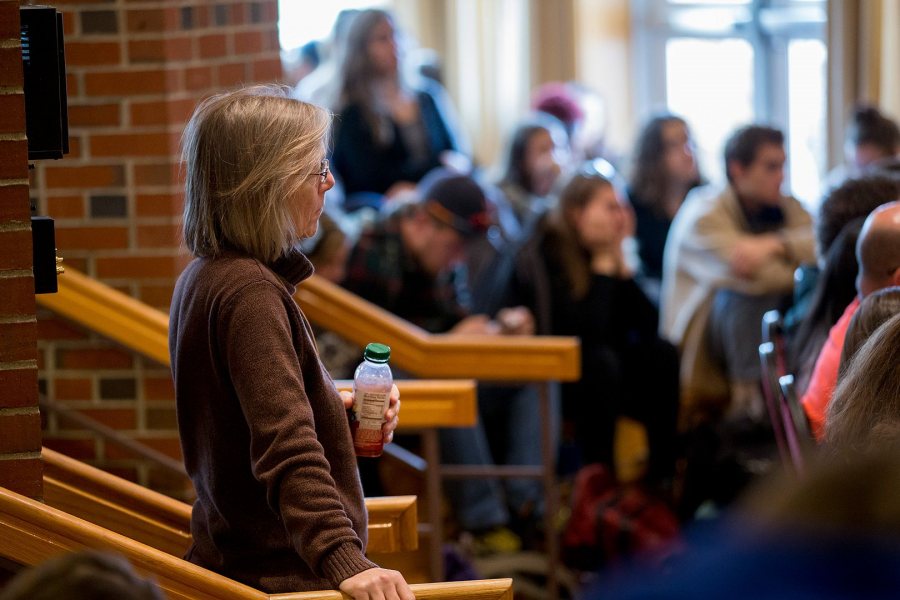 Jane Costlow, the Clark A. Griffith Professor of Environmental Studies, listens to the discussion in the Mays Center. (Phyllis Graber Jensen/Bates College)

Racial-justice interventions by the U.S. Justice Department like those we’ve seen under President Obama are unlikely under Trump, said Baughman. And a Trump-packed U.S. Supreme Court is not likely to support African American rights. But the federal court system below that level could provide a buffer.

What will happen to political promises such as Trump’s appointment of a special prosecutor to investigate Hillary Clinton?

The next four years, Baughman suggested, will afford a chance to see how much Trump meant of what he said on the campaign trail. But his term “will also be an interesting test of political institutions” — notably the career civil servants who embody much of the experience and know-how in Washington.

Will they be a stabilizing force? Baughman wondered, noting that the civil service is “a part of our political system that we usually take for granted.”

What might a Trump presidency mean for LGBT equality? 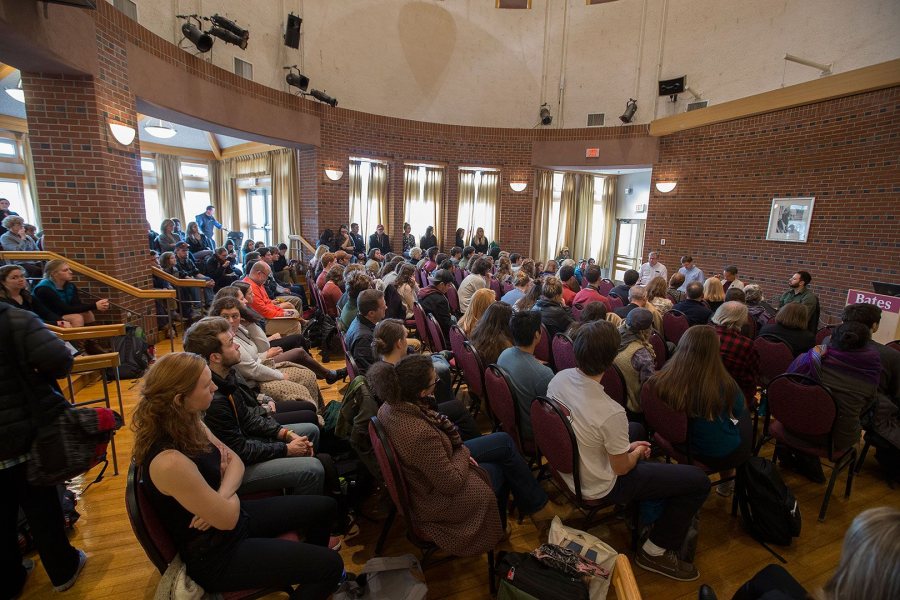 “What Just Happened?” fills the Benjamin Mays Center on the day after the election. (Phyllis Graber Jensen/Bates College)

Though unable to attend the Wednesday session, Stephen Engel, chair of the politics department, had already answered that question in October.

In a story for the McClatchyDC news service, Engel, who is the author of Fragmented Citizens: The Changing Landscape of Gay and Lesbian Lives, said that “the prospect for LGBT rights is not good” under a Trump administration.

Right off the bat, executive orders will likely be reversed, and, over time, courts will become more conservative.

A strategy to watch, Engel said, is states implementing “state religious freedom restoration acts.” Such acts could allow a baker, for example, to say no to making a wedding cake for a same-sex couple or a restaurant to deny an LGBT person a table based on religious convictions. 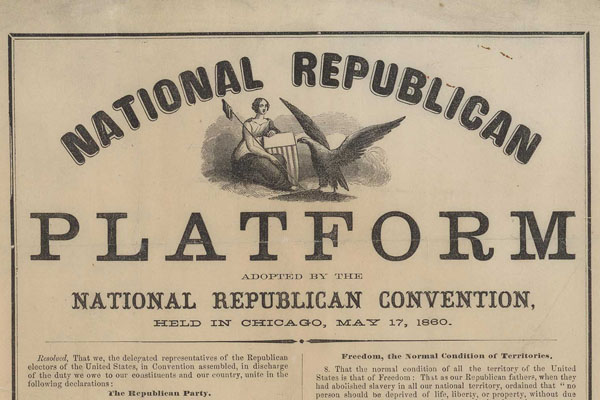