A tiara-wearing taxidermy pig stands on a shelf in the Carnegie Science Hall office of Associate Professor of Biology Lee Abrahamsen.

“I like her smile,” says Abrahamsen. “I’ve always liked her smile. And her snout.”

It’s not exactly a Wilbur-type pig but a javelina, a New World species common in South America and the U.S. Southwest. Biology students from those areas often recognize the creature when they enter Abrahamsen’s office. “They’ve hunted javelinas,” she says. “Other students come in and say, ‘What is that?'”

The specimen in Abrahamsen’s office is a baby, she adds. Adult male javelinas can grow to 100 pounds. 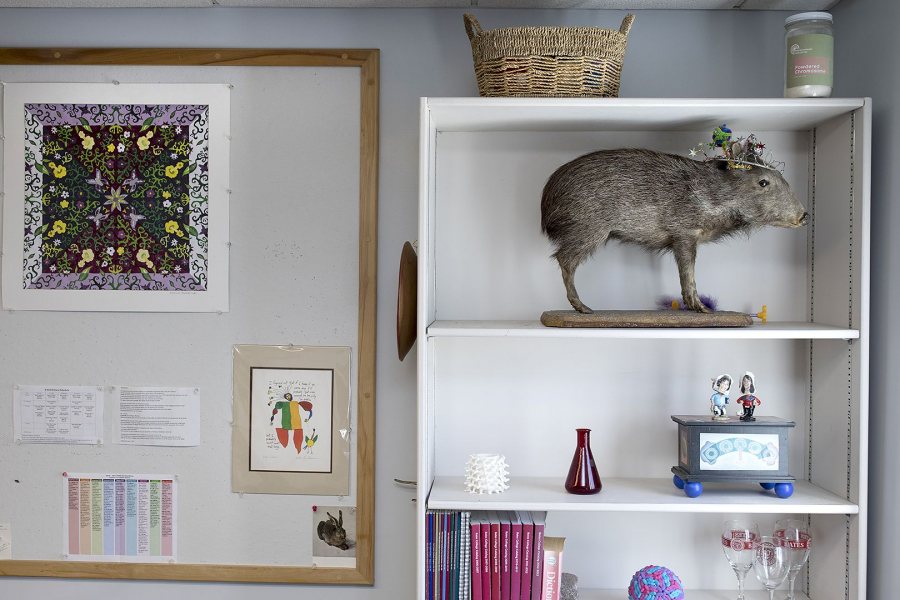 Abrahamsen has enjoyed the pig, smile and all, since 1989 when she and Pamela Baker ’69, now retired as the Helen A. Papaioanou Professor Emerita of Biological Sciences, began to share a faculty position and an office in Carnegie.

“We found it in a trash pile,” she remembers. At the time, many items in the college’s collection of pressed plants and stuffed animals, known as the Stanton Museum, were being sent to the Maine State Museum.

Baker, who had worked in the Stanton as a student, immediately recognized the pig, as well as a stuffed porcupine and squirrel. They chose to save the pig. Some pig!

“Everybody should have a tiara.”

This­ pig shall remain nameless. “We just always called her ‘the pig.’ We thought about it over the years and just couldn’t come up with a good one, which is odd. I name everything,” Abrahamsen says.

But that doesn’t mean she and Baker didn’t shower their “girl” with attention. Over the years, they dressed her in feather boas, pieces of glitter, and once, fairy wings. Most recently, she has sported a tiara. “At one point, Pam and I decided that everybody should have a tiara,” says Abrahamsen. 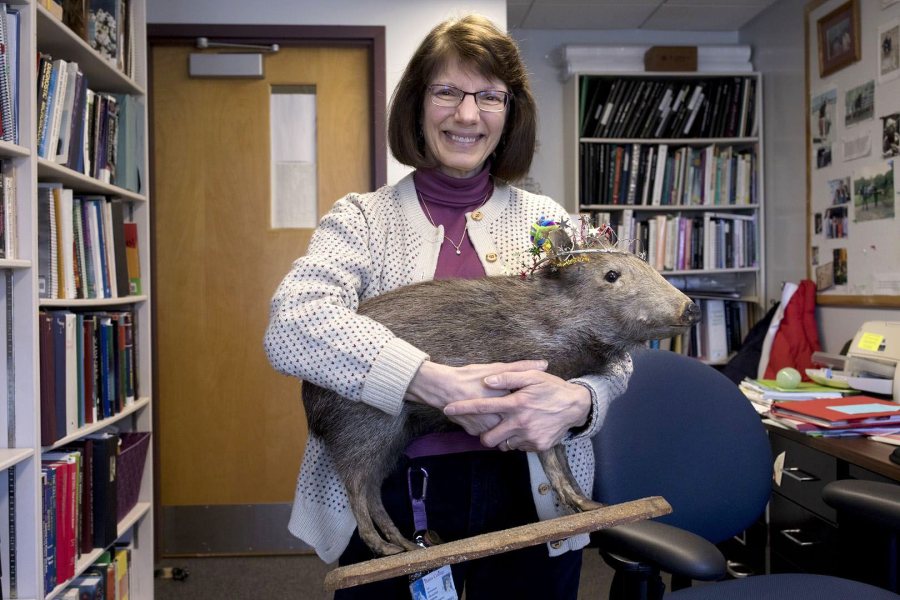 When Abrahamsen asked Baker for a pig comment, she sent a sentiment that speaks for both biologists.

“I always liked it as a reminder that all the cells and molecules that we taught about really did add up to be organisms of amazing kinds.”

Look What We Found: Kirk Read’s methuselah bottle of champagne