Not chaos in the disorderly sense but in the mathematical. Specifically, the room contains a homemade contraption that “demonstrates what chaos is,” says Raj Saha ’03, a faculty member in the geology and physics departments.

Known as a Lorenz water wheel, the apparatus looks like a miniature Ferris wheel. A bicycle rim is attached to a vertical piece of wood. Plastic bottles, sort of like gerbil water bottles, hang around the rim’s perimeter. There’s also a pump, tubing, and a wooden platform, all inside a plastic tub. 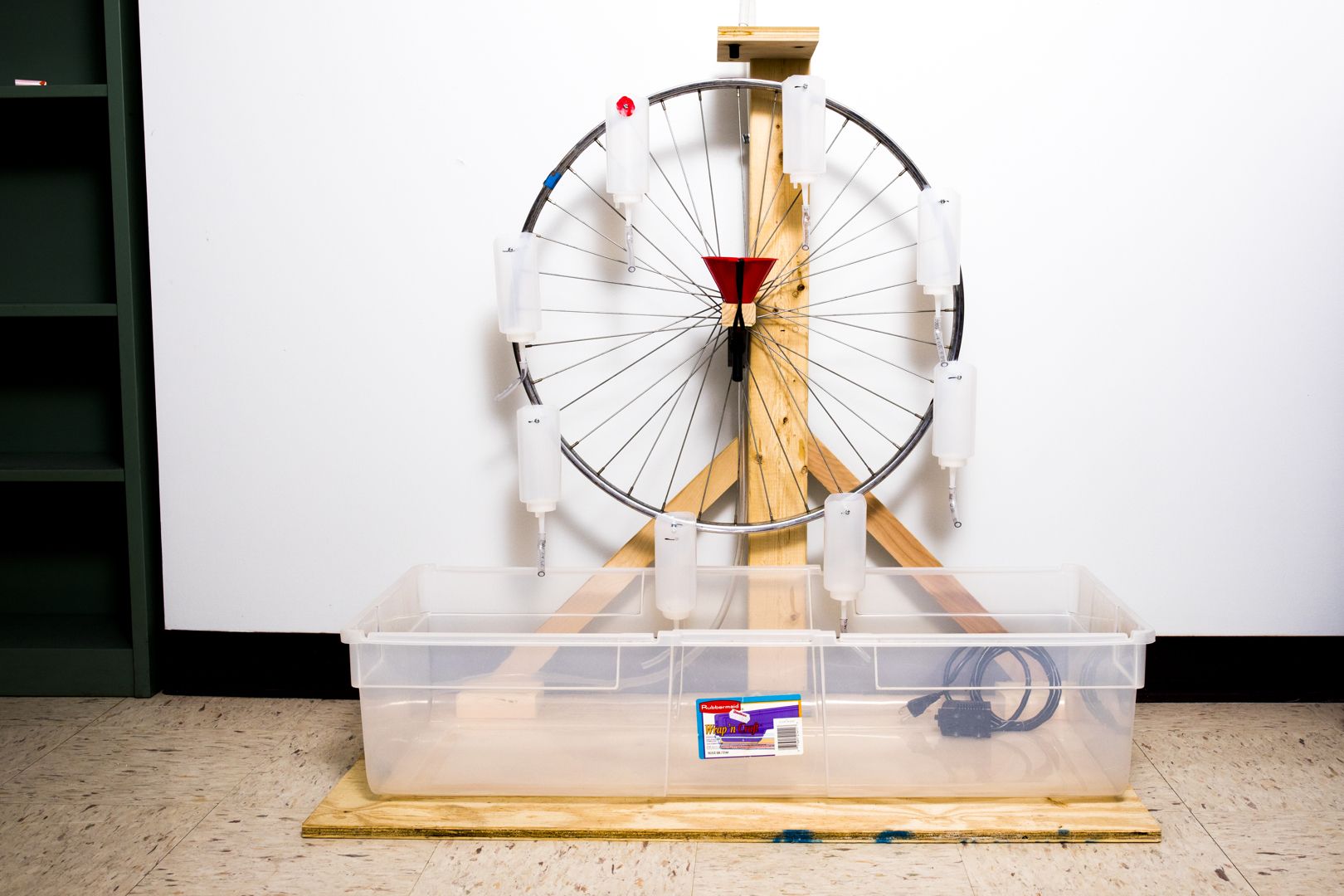 See how it works: A tank at the bottom holds water, and a pump pushes the water through the tubing to the top, where it fills the first bottle. Like a waterwheel, the wheel starts to spin. But here’s the chaotic twist: “Each bottle has a leak,” explains Saha, and each bottle leaks at a different rate.

Instead of each bottle filling and emptying like a regular waterwheel, which spins at a predictable rate, the bottles leaking at irregular rates create randomness. The wheel turns one way for a while, then slows down and turns the other way.

“The wheel’s dynamics are chaotic, which means that it’s very hard to predict which way the wheel is going to be turning at a given time,” Saha says. “Even if we know the exact speed it is rotating at any given time, and at a high degree of accuracy, we will not be able to predict how it will behave at any time in the future. That’s the basic fundamentals of how a chaotic system works.”

For example, chaos is why your weekend weather forecast can change several times before Saturday arrives. “Beyond a window of a few days, the predictive capacity of weather models completely breaks down,” Saha says.

“It was not just a show and tell but also a demo of a device that can generate data.”

“They did it all on their own, with zero help from me,” Saha remembers.

The assignment window was brief, and Saha was dubious that the pair could build the wheel. “But they did,” he says. “Not only that, they recorded it while it was in action and used that data for modeling, so it was not just a show-and-tell but also a demo of a device that can generate data.” They completed the modeling part as well. “Quite challenging,” he says.

Saberski’s thesis, in fact, explored ideas to predict “which way the wheel will turn at some future time,” Saha says, and his thesis presented a predictive algorithm that he applied to two chaotic systems: rainfall in India and bitcoin price fluctuations.

Students often learn about the concept as a mathematical construct, Saha says, but rarely “how it works in real life.” He plans to use the wheel with future classes as a real-world demonstration of chaos. That’s why he’s keeping it close by.