What I Mean When I Say: ‘Host,’ with Lee Abrahamsen

By Emily McConville. Published on November 2, 2017

But in Associate Professor of Biology Lee Abrahamsen’s profession, a “host” is more likely to harbor a parasite. 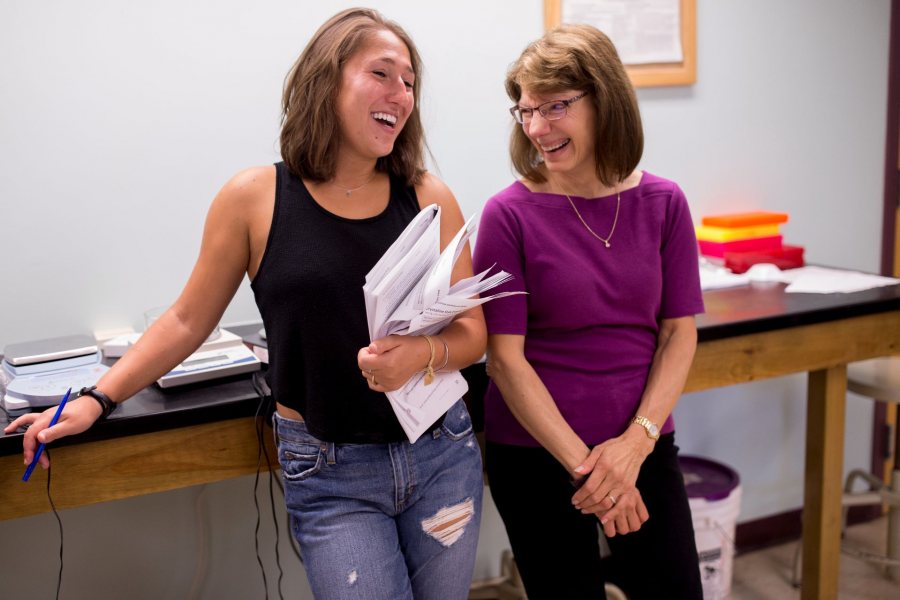 Rachel Blaustein ’18 of Needham, Mass., stands with Associate Professor of Biology Lee Abrahamsen during a biology lab in 2016.

Many people think of a biological host in terms of disease — a person plays host to the flu virus. But a bacterium can host a piece of “donor” DNA.

A host, Abrahamsen says, “is really anything that harbors something else in a way that allows the ‘something else’ to survive.”

Abrahamsen’s priority used to be virology; she used embryonic lung cells as hosts to grow the human herpes virus. About a decade ago, in order to bring more senior thesis students into her work, she shifted to bacteriology, studying antibiotic-resistant bacteria.

“The host becomes the thing that’s infected,” she said. “So the host can be a single cell, or it can be a whole organism. We’ve looked at different strains of antibiotic-resistant staph in people, in students, in dogs, and in horses. All of those are hosts.

“It’s not so much about the specific species involved, but more about the relationship between one organism and another. It really does swap meaning depending on what you’re talking about.”

For aspiring researcher Ducommun '11, senior thesis is a springboard to graduate school