“I’m really proud of this,” says Associate Professor of Politics Leslie Hill, holding a laminated, but yellowed, newspaper clipping that recalls a historic moment of protest by African American women.

The clipping is from the year 1991. In the midst of the infamous confirmation hearings for Supreme Court nominee Clarence Thomas, Hill was one of 1,600 black women who lent their names to a full-page ad in The Sunday New York Times. (Signatories also included Sue Houchins, now associate professor of African American studies.)

The ad, headlined “African American Women In Defense of Ourselves,” protested the racist and sexist treatment of Anita Hill (no relation to Leslie), the black attorney who had come forward to say that Thomas had sexually harassed her in their government workplace. 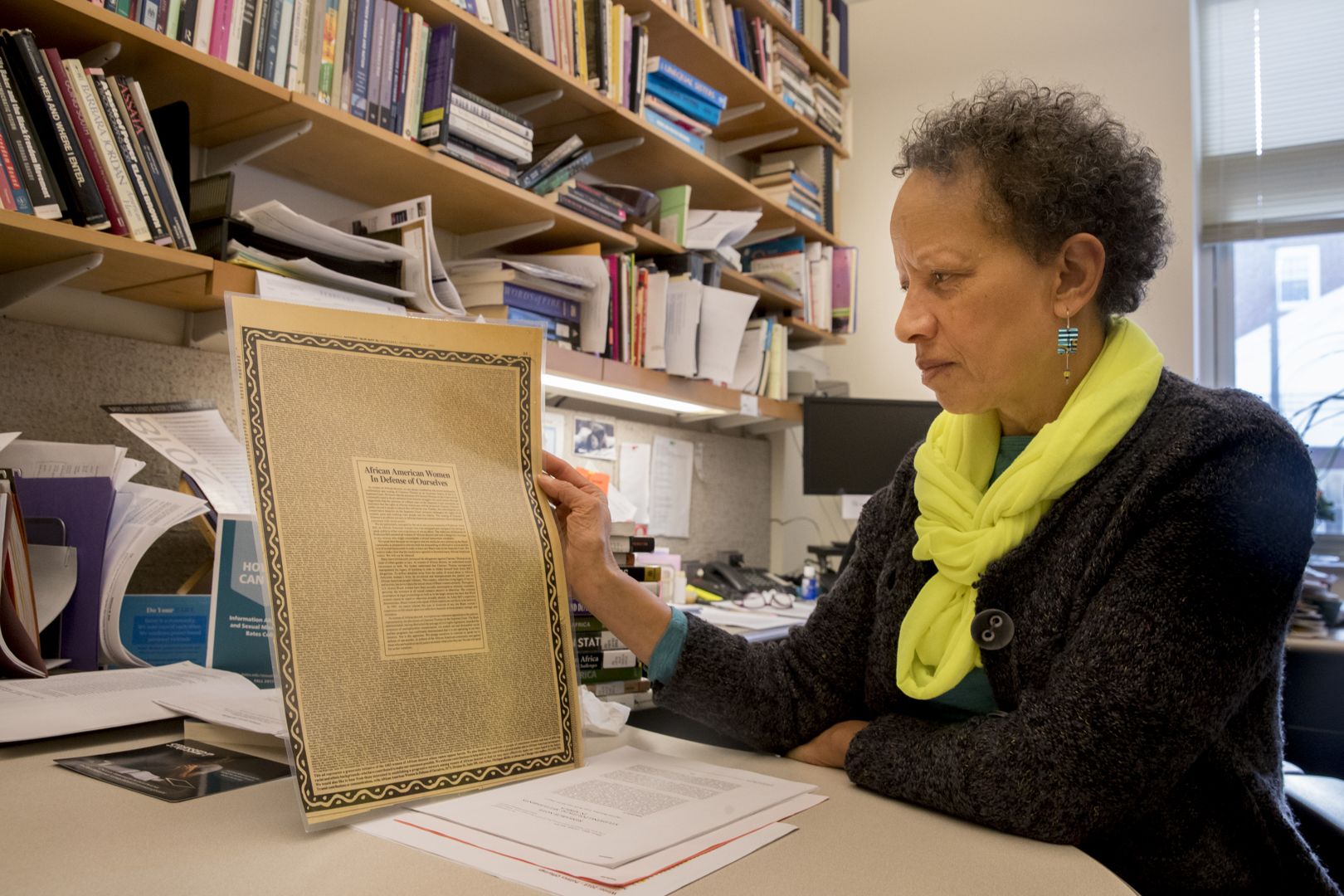 Hill, who joined the Bates faculty in 1988, has for a long time kept the clipping under wraps in her Pettengill Hall office. But this year, as the #MeToo movement has gained power, Hill “decided to go public” by sharing it with students in her course on race, ethnicity, and feminist thought.

Hill recalls the “disturbing recognition that Anita Hill was being incredibly disrespected.”

Today, the #MeToo victims often say they’ve kept silent out of fear of retaliation or that they would not be believed. Well, they have good historical reason: In 1991, the senators and the media alike treated Anita Hill shabbily, like a liar.

Back then, as Leslie Hill watched the hearings on live television with millions of other Americans, she recalls “a disturbing recognition that Anita Hill was being incredibly disrespected.”

In protest, a trio of African American feminist academics — historian Elsa Barkley Brown, sociologist Debra King, and historian Barbara Ransby — organized a response that culminated with a full-page advertisement in the Nov. 17, 1991, edition of the Times and other newspapers.

The ad reflected “this fury about the way Anita Hill was being treated, but also about the way in which black women’s experiences were being dismissed,” Hill says, recalling how the mostly white mainstream media framed the story through white women’s experiences, when it was about gender plus race and class — what we today call “intersectionality,” a term coined by scholar Kimberlé Crenshaw.

There was a “reticence on the part of black women to assert the nature of our own experiences, lest black men come under attack.”

Twenty-six years after the Thomas hearings, Hill’s students know the concept. “They’re familiar with it, and so that door is already open for making sense of what’s going on now.”

In 1991, African Americans were divided about Thomas’ fitness for the Supreme Court. “That made it hard for black women to come out defending ourselves,” Hill says. In addition, many in the black community were wary about “airing dirty laundry in public”; alluding to Crenshaw’s work, Hill says there was a “reticence on the part of black women to assert the nature of our own experiences, lest black men come under attack.”

Thankfully, the combination of dynamic, new scholarship and the multitude of public voices and role models makes it possible “to engage in public discourse about gender discrimination and oppression in ways that do not exclude the experience of black women and other women of color.” 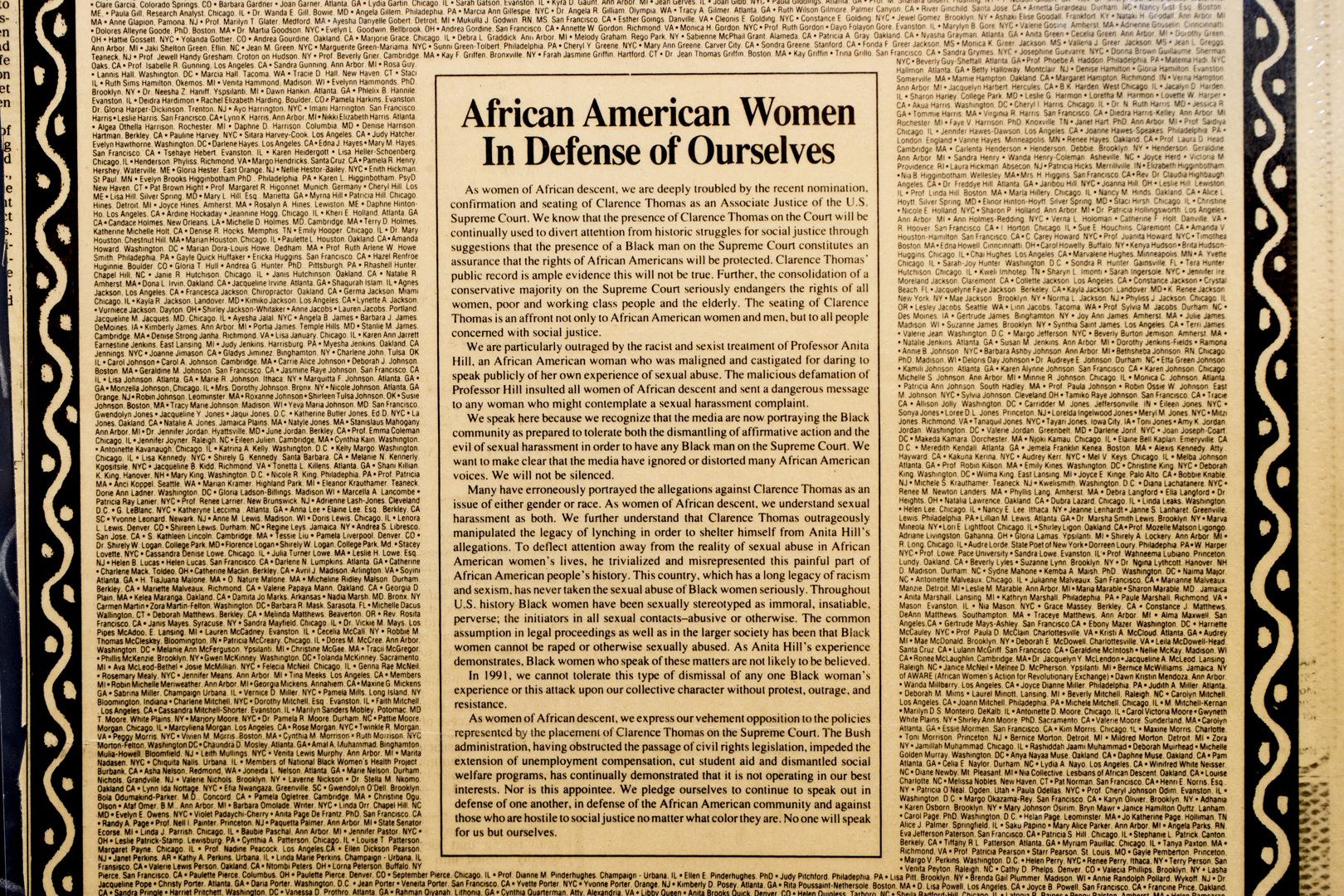 The text, surrounded by 1,600 signatures, of “African American Women In Defense of Ourselves,” as it appeared in the Sunday New York Times on Nov 17, 1991.

Hill points to Oprah Winfrey’s recent remarks at the Golden Globes and how Winfrey was able to “talk about sexual harassment and sexual violence and to do so in a way that brought in the experiences of black and working class women, in particular.”

In 1991, Hill was in Atlanta when the Times ad appeared. In that pre-Internet era, word of its pending publication “got out through various kinds of networks,” she recalls. “We bought every copy of the Times that was in Atlanta that day.”

Today, the historical memento inspires Hill’s efforts to create a classroom conversation about sexual harassment and sexual violence “that puts the most disadvantaged women at the center of the discussion: What kind of policy, what kind of action, what kind of practice, needs to be put in place in order to stop these violations, change this culture?”

Video: MLK Day at Bates is a chance to ‘get vulnerable’