Q&A: Katie Burke ’03 on how company culture can be a weapon or asset

Katie Burke ’03 has spent much of her career learning what drives people to do excellent work. The chief people officer at HubSpot, she oversees recruitment, company culture, and employee experience at the software and marketing company. She creates programs and structures to ensure that employees are both performing well and feeling valued.

The College Key’s 2019 Distinguished Alumna in Residence, Burke visited campus this week to talk with students, meet with faculty and staff, and give a public talk on how leaders can make their organizations more diverse and inclusive. 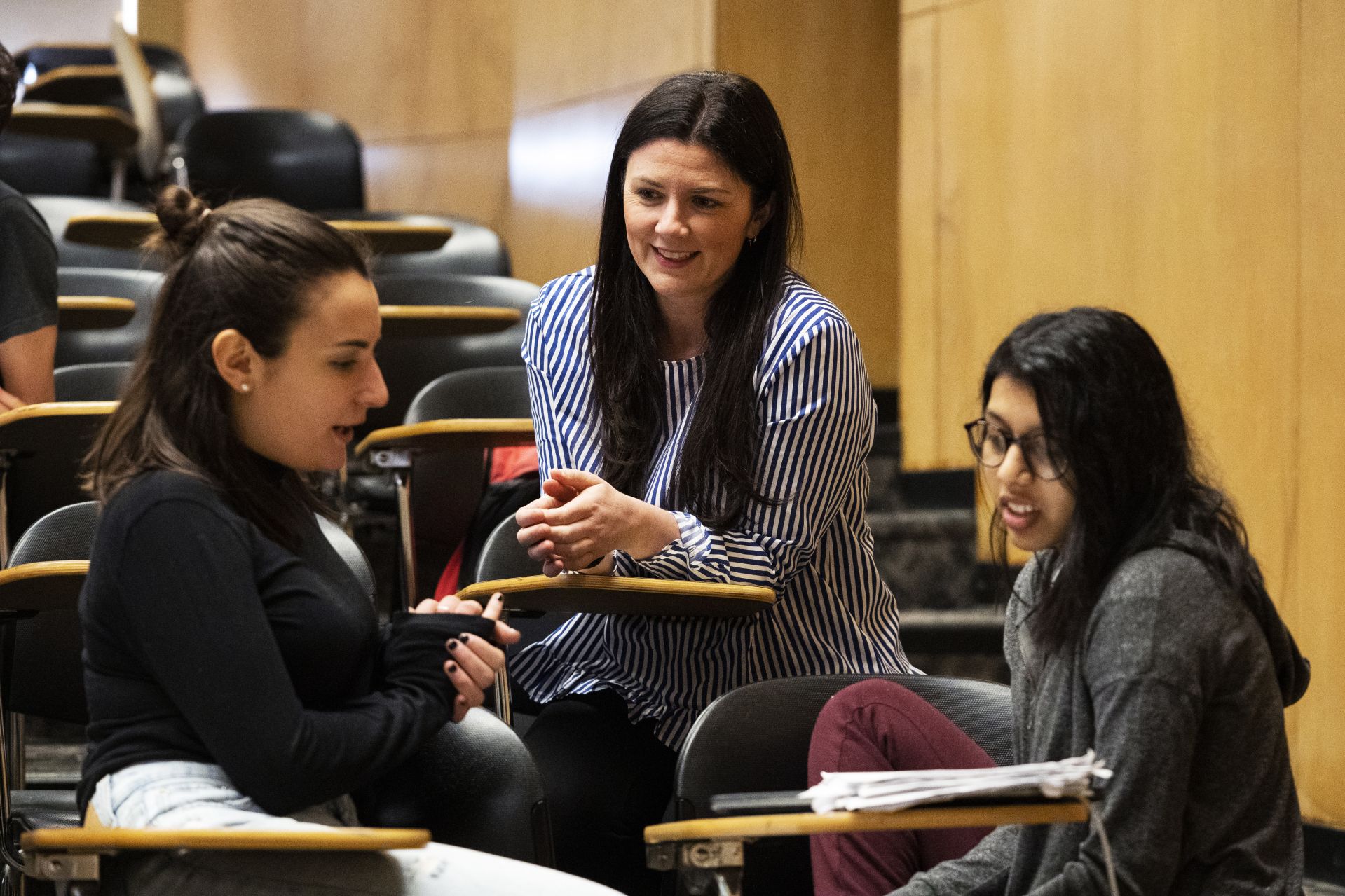 How did you become interested in working with and managing people?

I never had ambitions to have a career in HR or recruiting — so I like to think of it as good luck. I worked in politics, then I worked in marketing for a while.

Even going back to my time at Bates, I was always super-involved in campus activities and being a residence coordinator, even as a volleyball athlete. Anytime you play as part of a team, you think about what motivates people. Prior to joining HubSpot, I worked for a company called Exos. We trained the top athletes in the world.

We saw organizations that had holistic approaches to wellness. They really thought about injury reduction, sleep, nutrition, and fueling their athletes for long-term success. Then you saw places that were a little bit more churn and burn. It was my first exposure to thinking about the fact that there were two different ways to get to a championship team: One was short-term gains, and one was thinking about long-term assets.

HubSpot places a lot of emphasis on company culture. How do you define culture?

It’s the promise you make to your candidates and to your employees and the way in which you deliver on it every single day. What that actually means in practice is the decisions that drive the company. It’s the people who get promoted. It’s how mistakes get treated. It’s how decisions are made, and who makes decisions.

To me, it’s not just the posters on the wall. It’s how you live those ideas and bring them to life in every single way. What you have to do is match the rhetoric of what you’re saying with the reality of what you’re delivering. That’s a daily effort and a daily practice.

How do you think about diversity and inclusion in the context of culture?

Culture can be a huge asset in diversity, but it could also actually be a weapon. Sometimes organizations use the notion of “culture fit” as a reason to keep people out who aren’t the same as the existing employees. 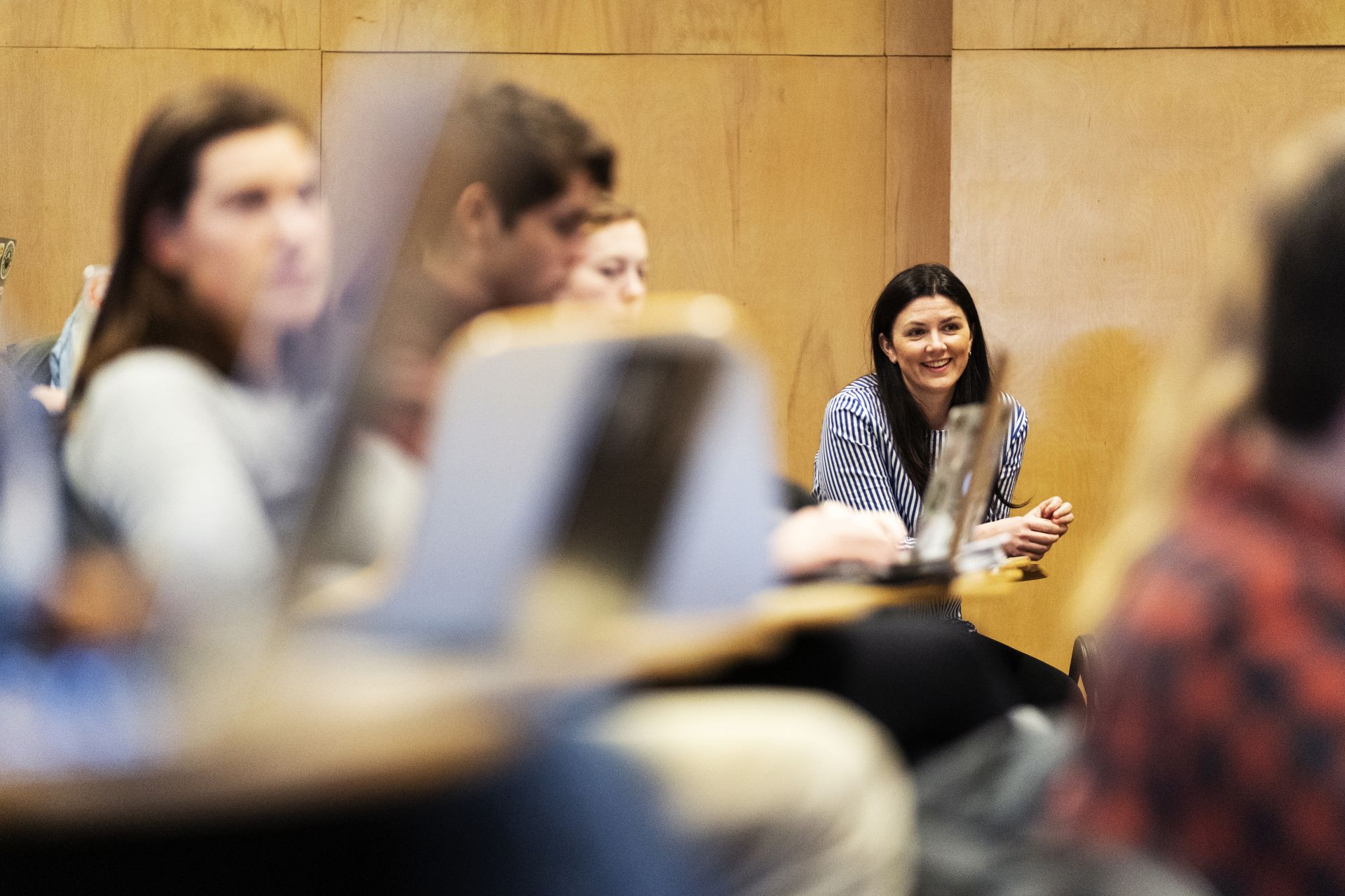 Corporate culture “can be a huge asset in diversity, but it could also actually be a weapon,” says Katie Burke ’03, the College Key Distinguished Alumna in Residence. Here, she visits a course on television criticism taught by Stephanie Kelley-Romano during her March 6 residency. (Theophil Syslo/Bates College)

What we’re looking for is people who challenge us to make it better. We want people who meaningfully add to it and change it and transform it over time.

An inclusive culture means that regardless of who you are, who you love, what your national origin or race is, what your gender is, it feels in every interaction like the company is conspiring for you to succeed and belong — not just that it meets a checklist of requirements, not just that they don’t say anything that’s exclusionary, but really that every signal they send makes it abundantly clear that you cannot just belong in that organization, but thrive.

What can companies do to support women in particular?

Sometimes perfect is the enemy of good. People wait for years and years to have the perfect women’s initiative, because they don’t yet have enough female executives. One of the things we did at HubSpot was to make a commitment to do the work even when we weren’t quite ready to say, “Yes, we’re ready for prime time.”

Your executive team should make it clear both why gender diversity is important and also what they’re going to do. Those things can be really simple commitments. You can get started by bringing in female speakers. At HubSpot, for International Women’s Day we have a huge event that specifically celebrates women aspiring to the highest levels of office, right from the start of their career.

We have a bunch of amazing women with board leadership roles talk about their experience, but we also provide tactical advice to make sure more junior employees are considering board positions early and often in their careers. When you aspire to the top echelons of business, you’re far more likely to get there

“We want people who meaningfully add to the culture and change it and transform it over time.”

We also host a workshop where both men and women can write LinkedIn recommendations for women that they either work with currently or worked with in the past. All those are small things that we’re doing to lead the way on that front. 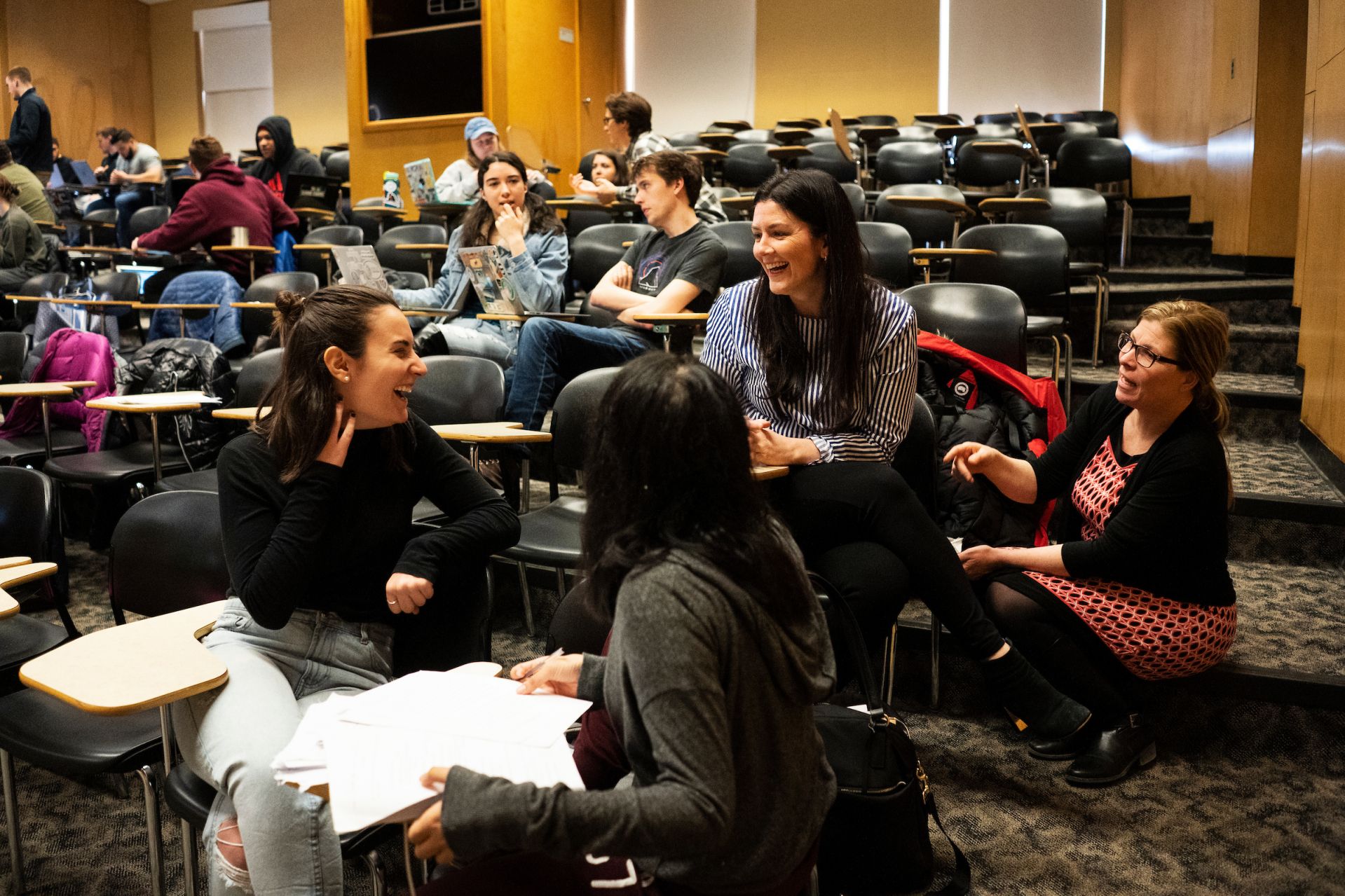 Katie Burke ’03 talks with students during her visit to a class on television criticism taught by Associate Professor of Rhetoric, Film, and Screen Studies Stephanie Kelley-Romano (right). (Theophil Syslo/Bates College)

Then there are things like how visible women are in your organization and leadership. How often do you release data about your gender diversity? What does your current parental leave or flexible work schedule look like? What stories are getting told about your employee experience? If you look at our social media accounts for HubSpot Life, our employment brand accounts, you’ll see amazing women from around the world sharing their stories and perspectives.

What can women do to advocate for themselves?

One of the things I suggest to women is to consider taking micro risks. Flex your confidence like a muscle on a regular basis. That can be as simple as practicing asking for a speaking opportunity, asking to network with someone that you might not otherwise, or asking what it might take to get a promotion or raise.

Women will say, “I asked for it, and I didn’t get it.” The ask itself is a huge victory unto itself. Once you get better at that, it becomes easier to find a place that will meaningfully invest in your success — if the answer is “no” at first, maybe it’s “yes” a year later. Flexing that confidence muscle earlier makes it easier once you have a bigger jump to make.

You’ve often spoken about the importance of books. Why is it important to read books if you’re in business or tech?

It’s easy to get really wrapped up in tech, in the world in front of us, and to look at things too closely. One of the best things that reading does is that it broadens your perspective. The decision you’re making probably isn’t that big of a deal in the greater context of the world, and thousands of people have experience that can help inform it.

My boss, our COO, is fond of reading historical books rather than current business books, because he believes that there’s very little you can’t learn about decision-making based on how history has played out.

“Flex your confidence like a muscle on a regular basis.”

I also really believe in using reading to diversify your perspective and representation on who you learn from. I make sure I’m consuming books written by women of color, by LGBTQ authors, by trans authors. We use our book club at HubSpot to make sure that we’re hearing from voices that aren’t necessarily as much promoted in the broader business world.

A good example is that The Hate U Give was one of our first books for Black History Month last year. It brought up perspectives on how young women of color factor into the arguments around gun violence and police brutality, and it led to interesting conversations that you might not otherwise have in the workplace.

To me, that’s a real gift. I want to be a part of workplaces where reading and literature and film and art inform the experience.