Did a certain well-known news organization “gerrymander” a map of the U.S. to bolster its claim of being the most-watched?

Did a prominent Midwestern university make misleading claims about its status as a producer of Fortune 500 CEOs?

These are just a few of the topics awaiting answers from students taking “Calling Bull in a Digital World,” a new course offered by the Program in Digital and Computational Studies. The intention of “Calling Bull” is simple: to make students savvier consumers of information.

In particular, the course explores motivations and techniques that drive the daily barrage — coming from both ends of the political spectrum — of BS in mass media. 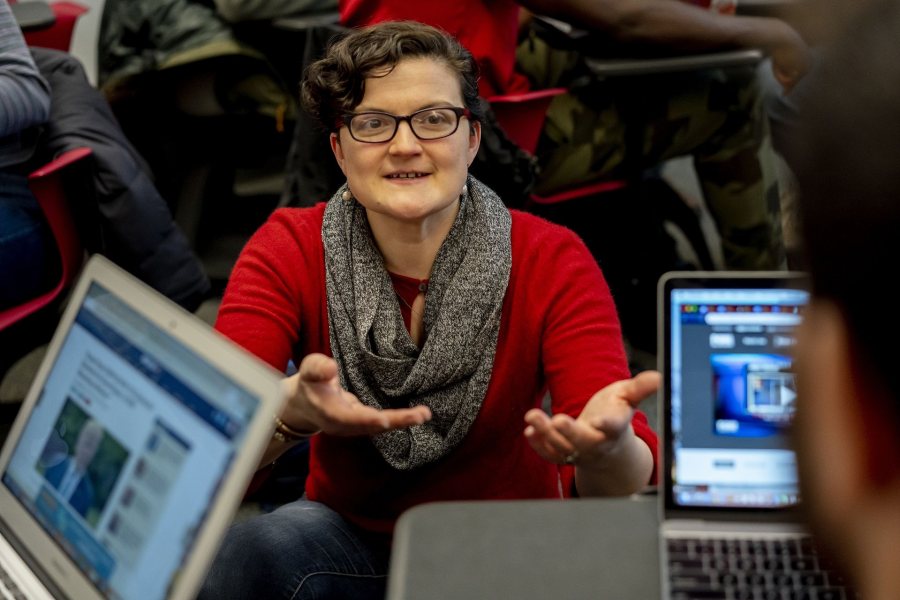 Taught by Carrie Diaz Eaton, associate professor of digital and computational studies, the course has equipped its 24 students with a variety of critical lenses for determining what’s slanted, downright fake, or innocent but wrong. The course is helping students “examine assumptions, think about how information is being presented, who’s presenting it, etc.,” Diaz Eaton says.

And along the way, “Calling Bull” has given students hands-on experience with the statistical programming language called R, which, among other purposes, is a powerful tool for analyzing data and rendering it visually.

“Nobody’s going to be a data scientist” after completing the 100-level course, Diaz Eaton says, “but we can give them some tools to better interpret the things they’re dealing with in the world.”

She adapted the Bates offering from “Calling Bullshit in the Age of Big Data,” a course launched to considerable acclaim in 2017 at the University of Washington by biologist Carl T. Bergstrom and information scientist Jevin West.

A stated goal of “Calling Bull” is to heighten students’ fluency with different modes of information — verbal, mathematical, visual.

In a look at how programmers’ blind spots can affect data quality, Diaz Eaton’s students have heard about facial identification algorithms, designed for fighting crime, that can reliably determine the gender of pale faces — but not dark ones. They’ve been introduced to Beall’s List of Predatory Journals and Publishers, an online effort, now discontinued, to call out scholarly journals whose failure to perform peer review can open the door to specious scholarship.

And they’ve confronted the discouraging reality of the so-called bullshit asymmetry principle, which holds that debunking fake news requires 10 times more effort than creating it.

A stated goal of “Calling Bull” is to heighten students’ fluency with different modes of information — verbal, mathematical, visual. And the mechanics and messaging power of data visualization have figured prominently in the course.

Early on, the class developed what Diaz Eaton calls a data visualization rubric — a list of desirable characteristics in visualizations. “Basically, the class created the thing by which they will be graded,” she explains. 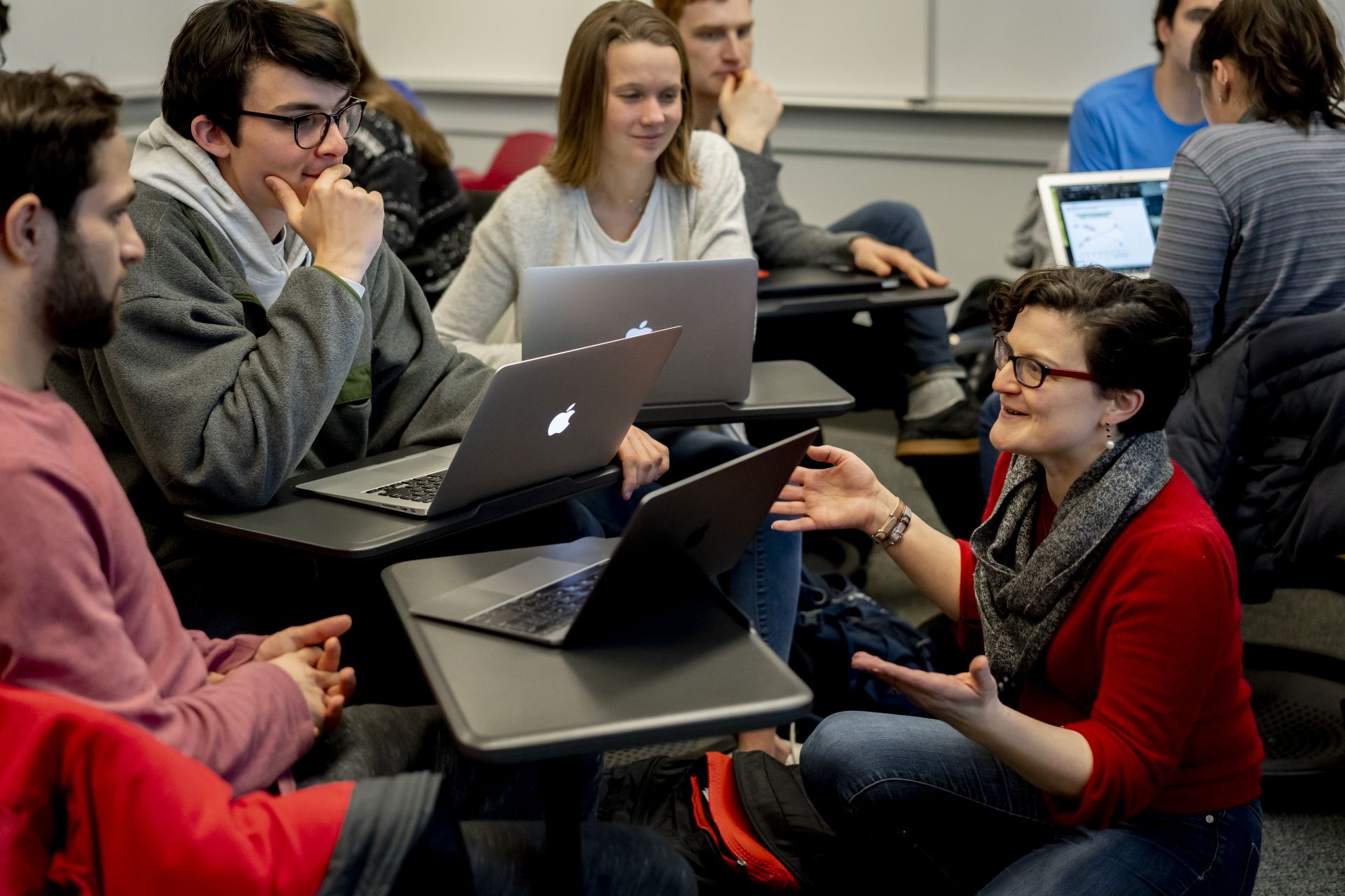 While Diaz Eaton’s 100-level course isn’t geared toward creating new data scientists, it can equip students with “tools to better interpret the things they’re dealing with in the world.” (Phyllis Graber Jensen/Bates College)

“I think that makes them pay more attention to what they’re doing right. They know that they’re going to be held to it. And by creating it, hopefully they remember what’s in it a little bit better.”

Throughout the semester, for a fifth of their grade, students have practiced ways of rendering their own day-to-day circumstances as visualized data using the book Observe, Collect, Draw! A Visual Journal. (In exercise No. 21, covering a surprising range of parameters, students expressed a week’s worth of complaints as musical notation.)

The course has “been great because we’ve been able to focus on things that are applicable to what’s happening in our everyday lives,” says Carly Ransford ’22 of Carbondale, Colo. (For Ransford, politics and “problematic statements” were two high-pitched plaints in exercise No. 21.) “I was attracted to it based on how it ties in humanities content with mathematical tools and skills.” 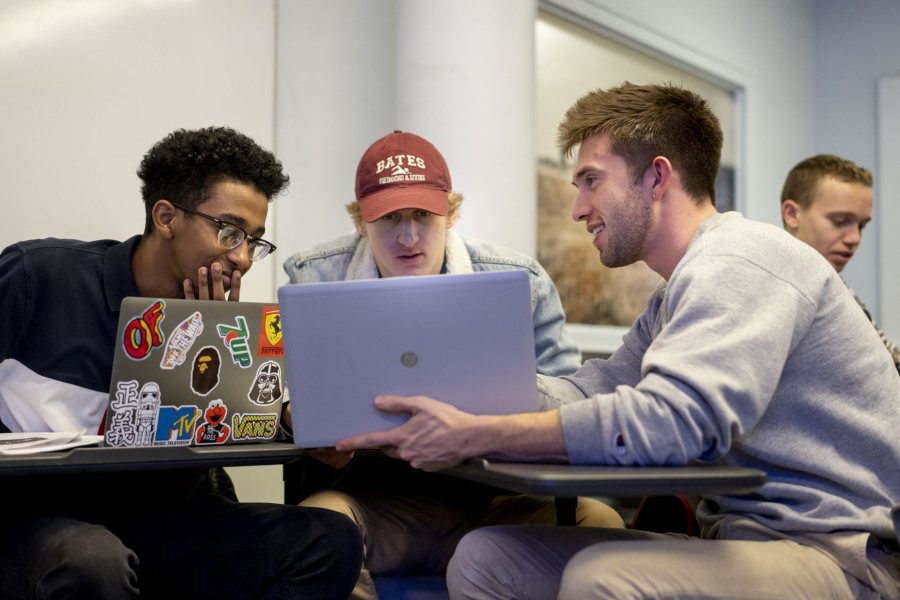 Ransford is typical of students that Bates’ new DCS program seeks to welcome, not frighten away. “As someone who’s not typically super excited by math and statistics, I liked that this was kind of a new approach,” she says. “Coding is something I’d never done before, but this class made me feel like I could have an interest in it, and actually gain some skills in it.”

Diaz Eaton explains that in her consultations with other faculty as she created the course, colleagues in other disciplines wished for a course that would deepen student thinking about graphs and ease them into using R. “If students haven’t seen that in the past, it becomes a bit of a hurdle.”

R is a command-line environment, common among programming languages, rather than a point-and-click interface. “You have to think about where your data is stored and how to store it,” Diaz Eaton says. “You have to make a lot of choices along the way.

“That kind of computational thinking is often new to students.”

As important as it is to be able to spot BS, a good digital citizen should also be equipped to explain why it’s BS — hence the “Calling” in the course title. So the students’ final projects involve, in effect, busting the BS artists. 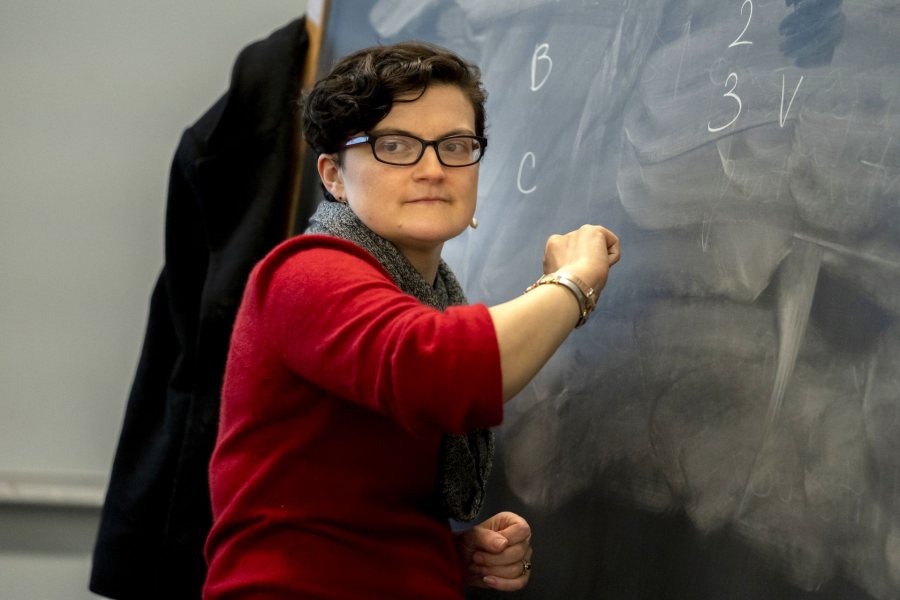 While the course “Calling Bull” is fun and empowering, its fundamental mission, of course, is profoundly serious. (Phyllis Graber Jensen/Bates College)

Having found three appropriately aromatic examples of fake or misleading info, each student needs to use R to analyze the data in one of those three cases. For example, Ransford is examining just how randomly Google Translate assigns gendered pronouns to neuter terms that it translates from other languages.

For the second case, the task is to publicly refute an outstanding specimen of BS. And for the third, the assignment is to improve an existing public visualization of data.

“Calling Bull” is fun and empowering, providing a frisson of the particular satisfaction that comes with revealing a lie. But its fundamental mission, of course, is profoundly serious.

In a recent class session, says Diaz Eaton, “we talked about how having a successful democratic republic requires access to real and authentic information.” Once you lose the access, you may lose the democracy.

“That’s the real threat,” she says. “We want people to be able to think that they have a role as a digital citizen to play in the world of fake news and not feel like, ‘Oh, it’s just this thing that happens elsewhere.'”