During a recent baseball game at Nashua’s historic Holman Stadium, the pitcher got the hitter to whiff on a pitch. Then, to everyone’s surprise, the pitcher did some trash talking.

It was curious because the pitcher’s own team, the Nashua Silver Knights of the Futures Collegiate Baseball League, was getting thrashed by the hitter’s team, the Bristol Blues, by an 11-3 score.

The reason for the outburst (and the humor behind it) soon became clear: Both pitcher and hitter were Bates College baseball players and good friends.

And in this case, the “pitcher,” Jack Arend ’20, is actually a catcher, the reigning NESCAC Co-Defensive Player of the Year. On the mound to save arms, Arend was having fun needling his fellow Bobcat, Christian Beal ’21, for missing his 75 mph “fast” ball.

“People were like, ‘Who the hell is this kid?’” Arend recalls, laughing about the memory. 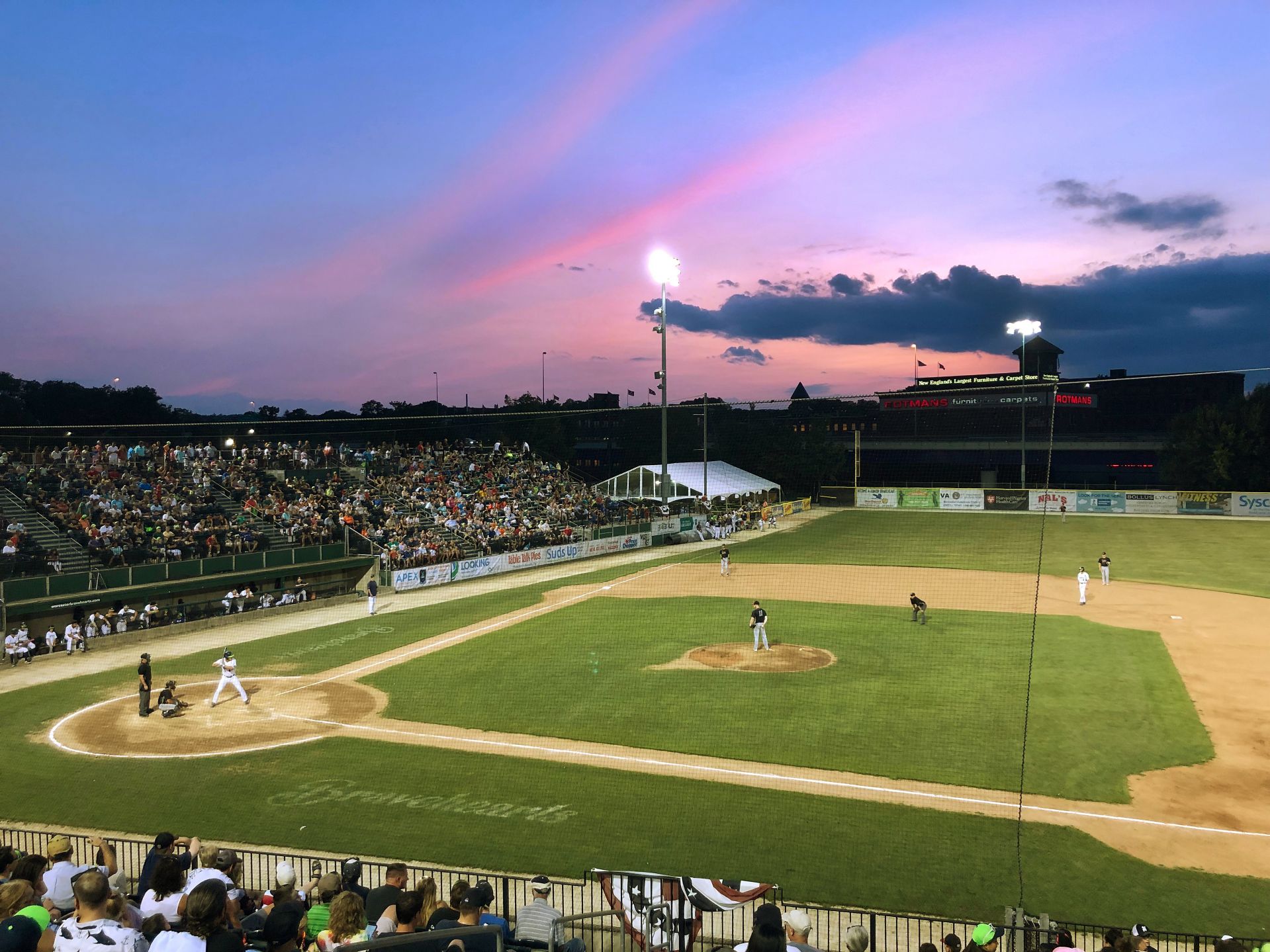 Nolan Collins ’20 prepares to pitch to batterymate Jack Arend ’20 as their Nashua Silver Knights take on the Worcester Bravehearts before a big crowd at Worcester’s Hanover Insurance Park at Fitton Field on Aug. 2. (Photograph by Peggy Arend)

Throughout America, from Alaska to Cape Cod, dozens of summer wood-bat leagues offer college players a chance to hone their skills and have fun.

Some players want professional scouts to discover them. Others are trying to improve so they can play a bigger role for their teams come spring.

And this summer, all three played in New England’s seven-team Futures Collegiate Baseball League. While less well-known than the famed Cape Cod League (which also hosted Bates players in recent years), the Futures League, founded in 2011, is the real deal, having produced 37 MLB draft picks in 2019 alone.

“A lot different than the NESCAC”

As Beal is interviewed before Bristol’s road game against the Brockton Rox, teammates passing by the first-base dugout at Campanelli Stadium keep interrupting him.

A pair of Bristol pitchers from NCAA Division I programs Hartford and Central Connecticut State walk by. “Go Bates!” says one. “Must be nice to have juice, baby!”

It’s a reference to Beal’s first home run of the summer, and his teammates enjoy razzing him about it.

@BatesBaseball and current #Blue @ChristianBeal48 hits his first HR of the season.

“I was a little shocked that one snuck out,” teases outfielder Brandon Miller, who plays for St. John’s University in the spring. “But I’m happy for him, it’s about time. We always yelled ‘no juice’ at him when he gets caught at the track because he puts a lot of them out there.”

“Are you kidding me?” Beal retorts. “I hit the ball way farther than you.”

Beal’s home run, appropriately enough, came against Arend’s Silver Knights. Beal flexed toward Arend watching from the dugout, and pointed to his bicep as he approached home plate.

“I was just letting him know what he was looking at,” smiles Beal, who plays every outfield position for Bristol. “That’s just how Jack and I talk. He went up to our first baseman later and said, ‘Man, I won’t stop hearing about this all summer.’” 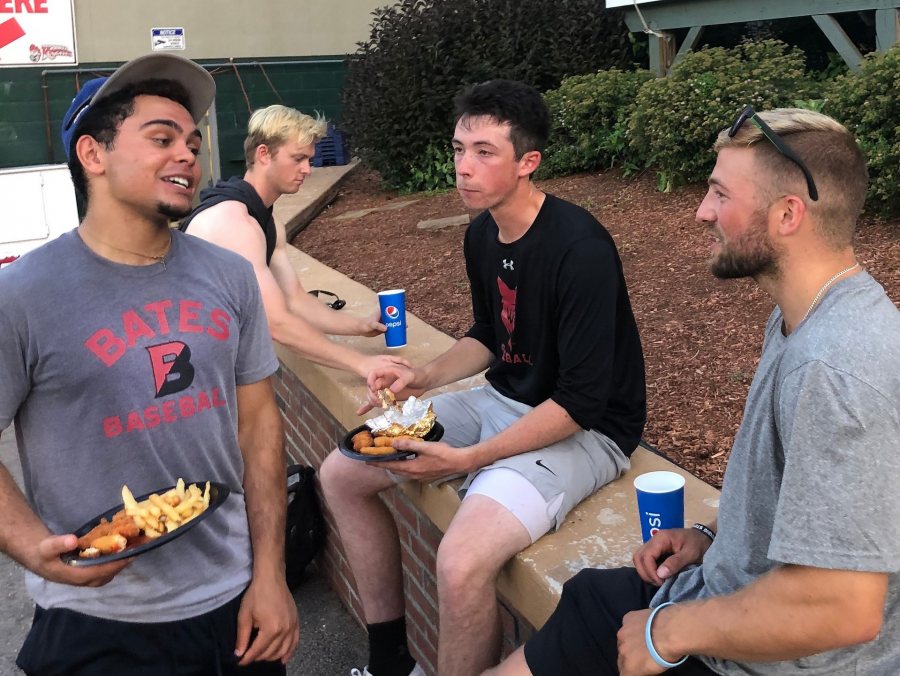 The trash-talking Beal is embracing this opportunity to play with and against Division I guys, facing pitchers who generally throw at least 90 mph with outstanding off-speed stuff.

“You know R.J. Hall on Tufts, how good he is?” Beal asks, referring to the 2019 NESCAC Pitcher of the Year. “You see that every night here.”

Beal, who finished fourth in the NESCAC with a .370 batting average last spring, sees room to improve. This summer, Beal is trying to do more damage to off-speed pitches, as opposed to fouling them off. And he’s looking to hit the ball to all fields more consistently.

“Obviously, I feel like I’m a good hitter, but everyone has weaknesses,” Beal said. “You just want to work on them. This summer is a big opportunity for me to do that work. You’re playing five, six times a week. So it’s a lot of at-bats.”

Each Futures League team plays a robust regular-season schedule: 56 games packed into 68 days from late May to early August. By comparison, Bates played 36 games this spring over 82 days, from February to May. 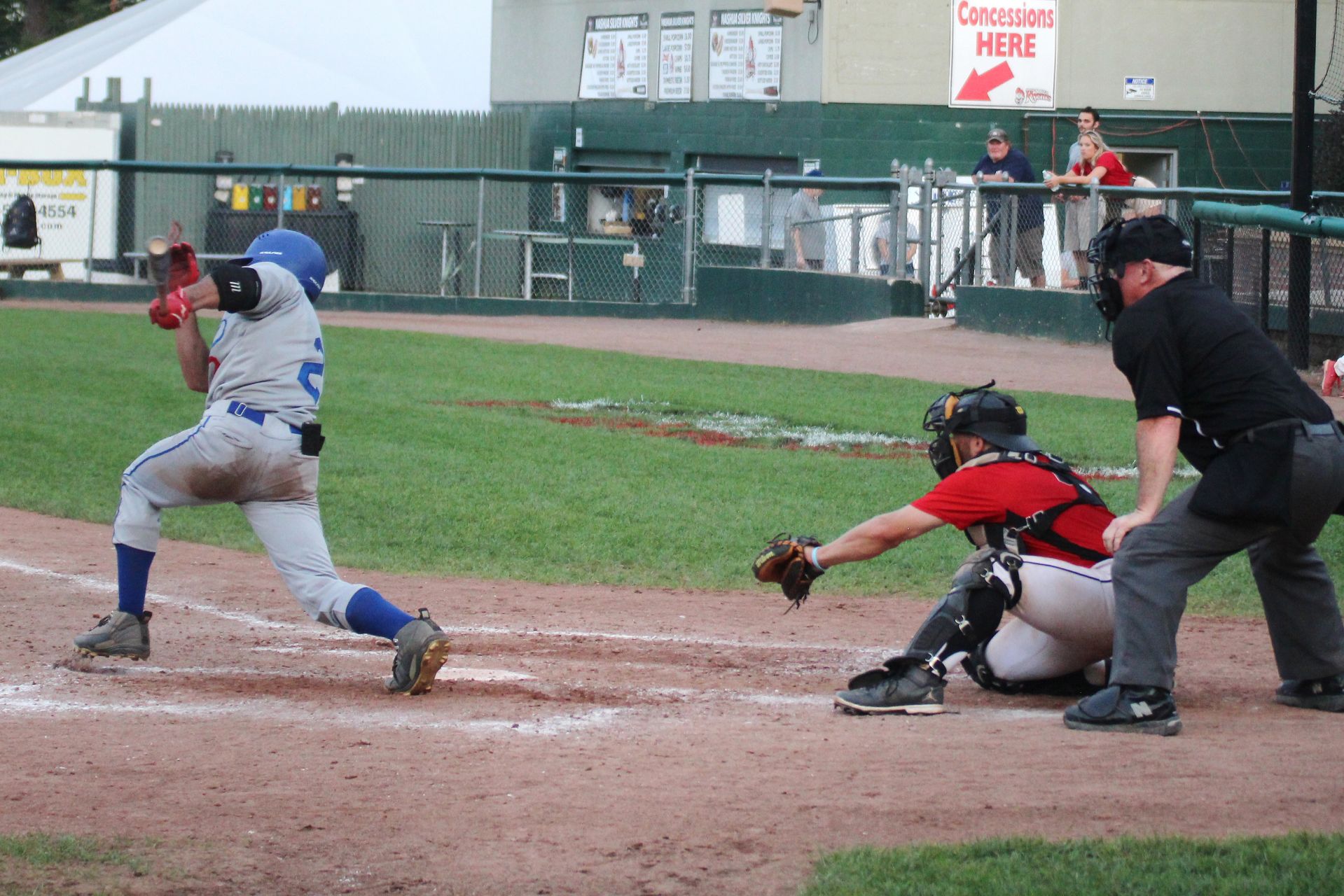 With Jack Arend ’20 behind the plate for the Nashua Silver Knights, Christian Beal ’21 of the Bristol Blues takes a cut during a July 21 game. (Photograph by Peggy Arend)

When teams go on the road in the Futures League, they return that same night to their hometown. Bristol is one of two teams in the league not located in Massachusetts. So the Blues have some of the longest bus rides.

“It’s a lot different than the NESCAC,” Beal laughs. “You’re fresh for NESCAC games. It’s a lot on your body, but it teaches you to take care of it and just process everything, slow things down for yourself.”

A native of Illinois, Beal is one of a number of Futures League players who lived with a host family this summer. Host families are vital to the success of any collegiate summer league. They provide players a free place to stay for the duration of the season.

“We’re always on the road, and they’re working all day, so the most quality time we get together is on the weekends when we’re at home,” Beal said. “I enjoy getting breakfast with my host family on weekends and we chat about politics.”

Politics can be an especially fraught subject these days but as Beal says: “I go to Bates, man! Who doesn’t talk politics at Bates?”

When he has the night off, Beal still does work in the batting cage. It’s a professional, yet laid-back, environment. Unlike the strictly regimented routines at colleges, the coaches in the Futures League expect the players to take care of business without a lot of supervision. And Beal impresses them. 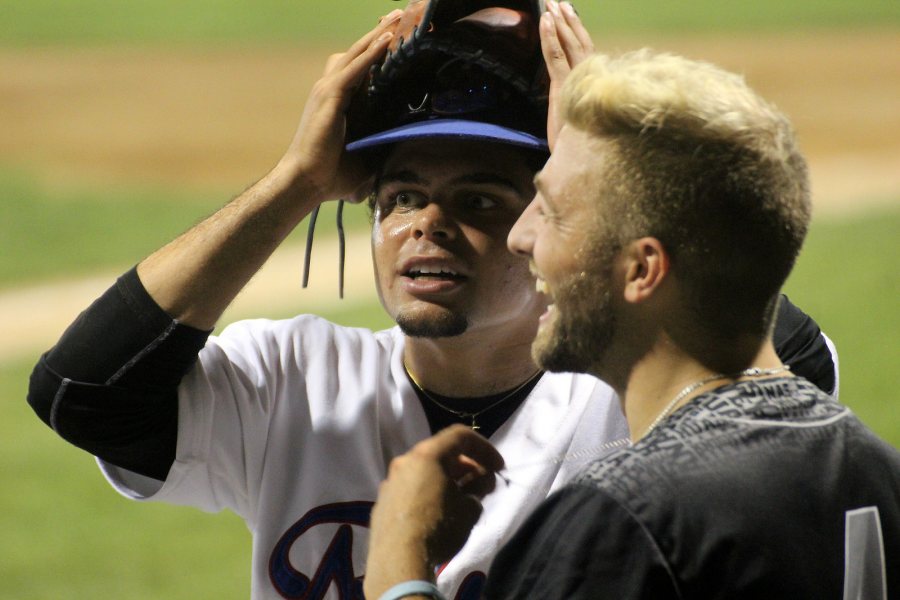 Competitors on the field and friends off, Christian Beal ’21 (left) of the Bristol Blues and Jack Arend ’20 of the Nashua Silver Knights share a laugh after their July 27 game. (Photograph by Peggy Arend)

“We’re really happy to have [Beal] in Bristol,” assistant coach Jordie Scheiner says. “He’s been great with the bat. He plays a really good outfield. He’s just athletic. He shows up every day and works his tail off.”

Scheiner is in his fifth year coaching for the Blues. He is a Division III product himself, having played at Colby-Sawyer College. The Blues and all Futures League teams are always on the lookout for Division III players who can contribute.

“It also helps guys from bigger schools realize that there’s other baseball outside their schools and there’s good caliber baseball all over the country,” Scheiner said. “It doesn’t matter if you’re Division II or Division I or NAIA or Division III — if you can play, you can play and people are going to notice you.”

After an outstanding season on the mound for Bates, Nolan Collins started the summer in the New England Collegiate Baseball League with the Sanford Mainers. Assigned to the bullpen, Collins wanted to start. So he called Arend to see if the Silver Knights needed a starting pitcher.

They did, and the two reunited in Nashua after spending the previous summer playing together on the Rox. Arend, a New Hampshire native, decided to play with the Silver Knights this year in part because he can sleep in his own bed for the summer. And now Arend’s house is a place for the Californian Collins to stay.

“I’m living in Jack’s basement right now,” Collins said. “I’m hanging out down there with the dog and it’s awesome because I’m close with Jack and his family. So it’s nice that they cook breakfast for me everyday. It’s just good to see his family, they’re great. It’s been a seamless transition.”

Arend catches about a third of the games, DH’ing and playing other positions when needed. He always starts behind the plate when Collins is on the mound. 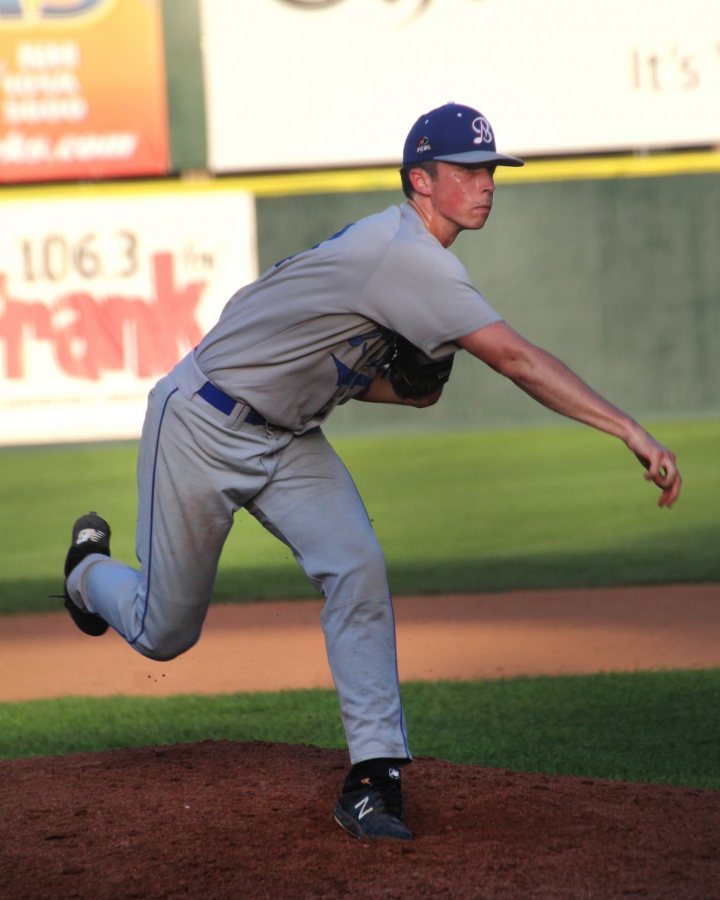 Miles Michaud ’20 pitches for the Bristol Blues on July 21. (Photograph by Peggy Arend)

There’s a passionate fan base, highlighted by colorful characters such as a man known simply as “Mad Dog” who goes around barking at opposing players.

“Fridays are fireworks night, and this place is packed,” Arend said. “The stadium holds more than 2,500 people and all the guys love playing in front of big crowds. These are die-hard fans.”

Plus, the kids who come to the games don’t care that these players aren’t big leaguers — they still want autographs.

“You remember, ‘I used to be that little kid going around asking for autographs and stuff,’” Collins said. “So, it’s fun to make a kid’s day, signing baseballs, signing hats, all that stuff.”

The Futures League also features 18-year-olds heading off to college for the first time. Both Bobcats find themselves mentoring future Division I players.

“Guys who are going to these big schools — and you know they are going to be good — come up to me between innings and ask, ‘Hey, what are you seeing with my swing?’” Arend said.

“And I’m like, ‘Wow, am I that old already?’ But it’s really cool to be able to talk to guys and be like, ‘Hey, maybe think this or do this, and try to just be an athlete and be competitive.’” 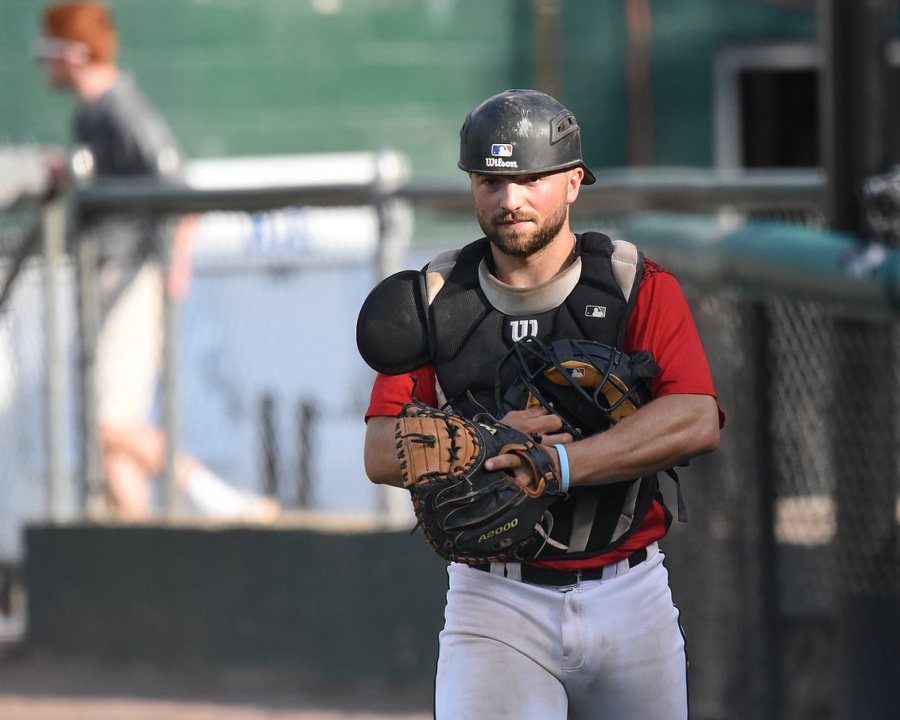 Standout Bates catcher Jack Arend ’20 dons the so-called tools of ignorance for a July 21 game vs. the Bristol Blues. (Photograph by Peggy Arend)

In a game against the eventual league champion Worcester Bravehearts on Aug. 2, Collins found his stride, a seven-inning performance in which he allowed just one earned run, striking out three along the way.

With these Bobcats, the needle is always ready. And Arend is quick to point out that he, the catcher, has the lowest ERA on the team: 0.00 in 2.1 innings pitched.

“I’m going to become his pitching coach,” Collins says. “He’s got a decent change-up, honestly. But he’s gotta get the velo up, get the lower half involved. But we’re working on it, we’ll get there.”

With senior year fast approaching, Arend and Collins are thinking about what the 2020 baseball season will bring. They recently received an email from 2019 NESCAC Coach of the Year Jon Martin with the names of the incoming Bates baseball first-years.

“I remember that day when the seniors and captains texted me,” Arend says, recalling what they told him about playing in the Future League. “‘You guys will have the opportunity to do something like this, definitely take advantage of it, if you want to continue to develop and play baseball.’”

Arend adds: “You learn so much about yourself as a player and not everyone gets the chance to play summer ball, so embrace the opportunity.”