For Bates football, 6-year-old Brayden Austin is their captain courageous

Back in August during a preseason football practice at Garcelon Field, the coaches announced that it was time for “up downs.” On the whistle, everyone gets down on the ground and then jumps back up, over and over until the drill is complete.

For head coach Malik Hall, the exercise is a metaphor, a life lesson that extends beyond physical fitness. All you have to do is keep getting back up —  whether it’s after a tackle on the football field or when facing adversity in life.

Fast-forward to a recent practice before the team’s first game. Running onto the field comes 6-year-old Brayden Austin. Hall introduces him to the team as someone who has had a lot of ups and downs in life — someone who gets up every single day and keeps on fighting.

The little boy will join the team as an honorary captain this year, Hall announces. 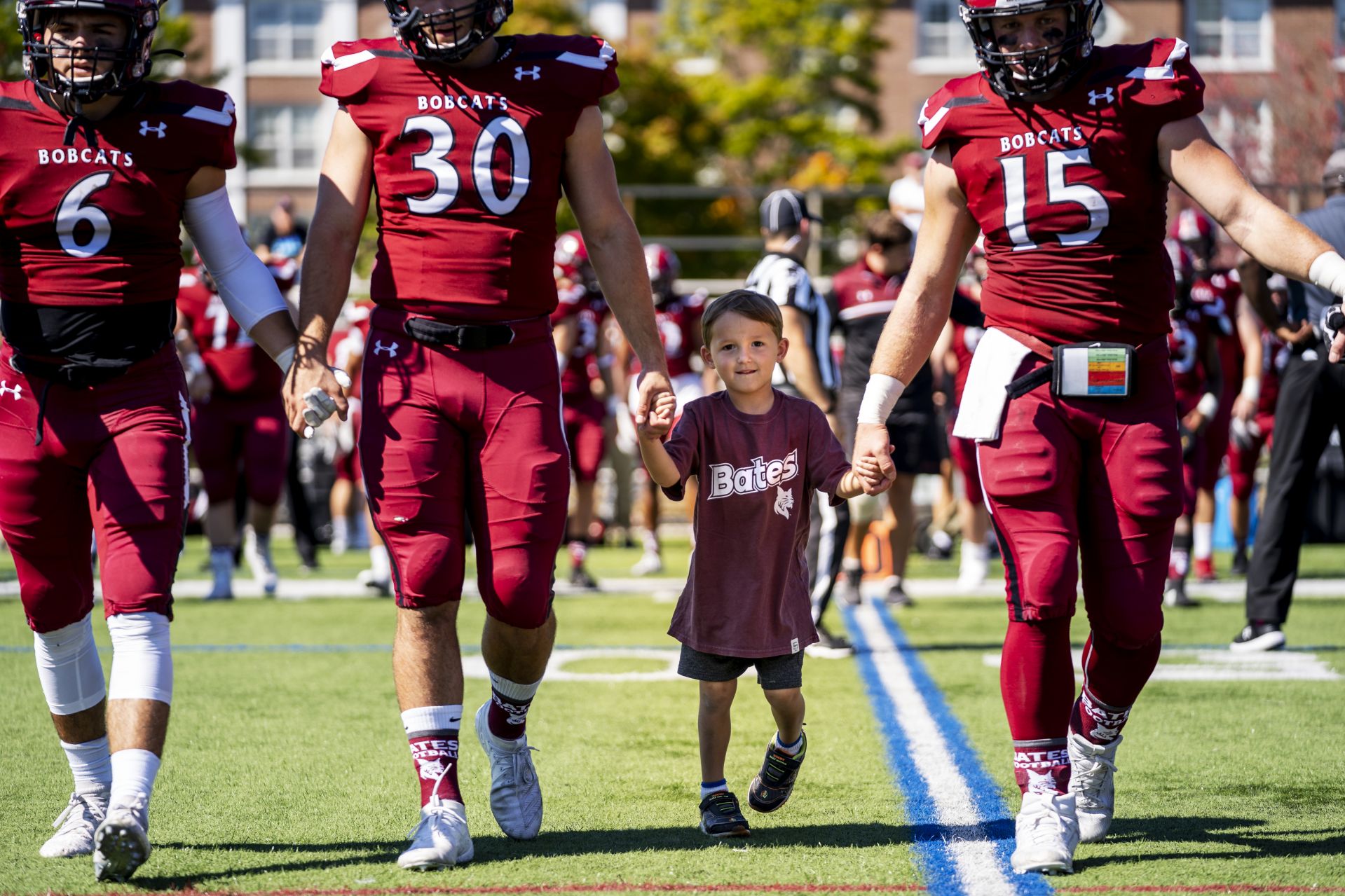 Austin hops into the stretch line. He’s high-fiving everyone and copying every move in the warm-up. Instantly, Austin becomes a Bobcat.

Back in March 2015 when Austin was 20 months old, his life changed forever. One Saturday, he woke up at 5 a.m., ate breakfast, and played with his older brother and his toys. “It was like any other Saturday morning,” recalls his mother, Jennie Cloutier-Austin.

Then came great pain and distress. Transported by Lifeflight helicopter to The Barbara Bush Children’s Hospital in Portland, he endured two life-saving surgeries within 48 hours, losing all of his small intestine and half of his large intestine.

He had suffered a midgut volvulus, in which the small intestine wraps tightly around the large intestine, cutting off blood circulation. 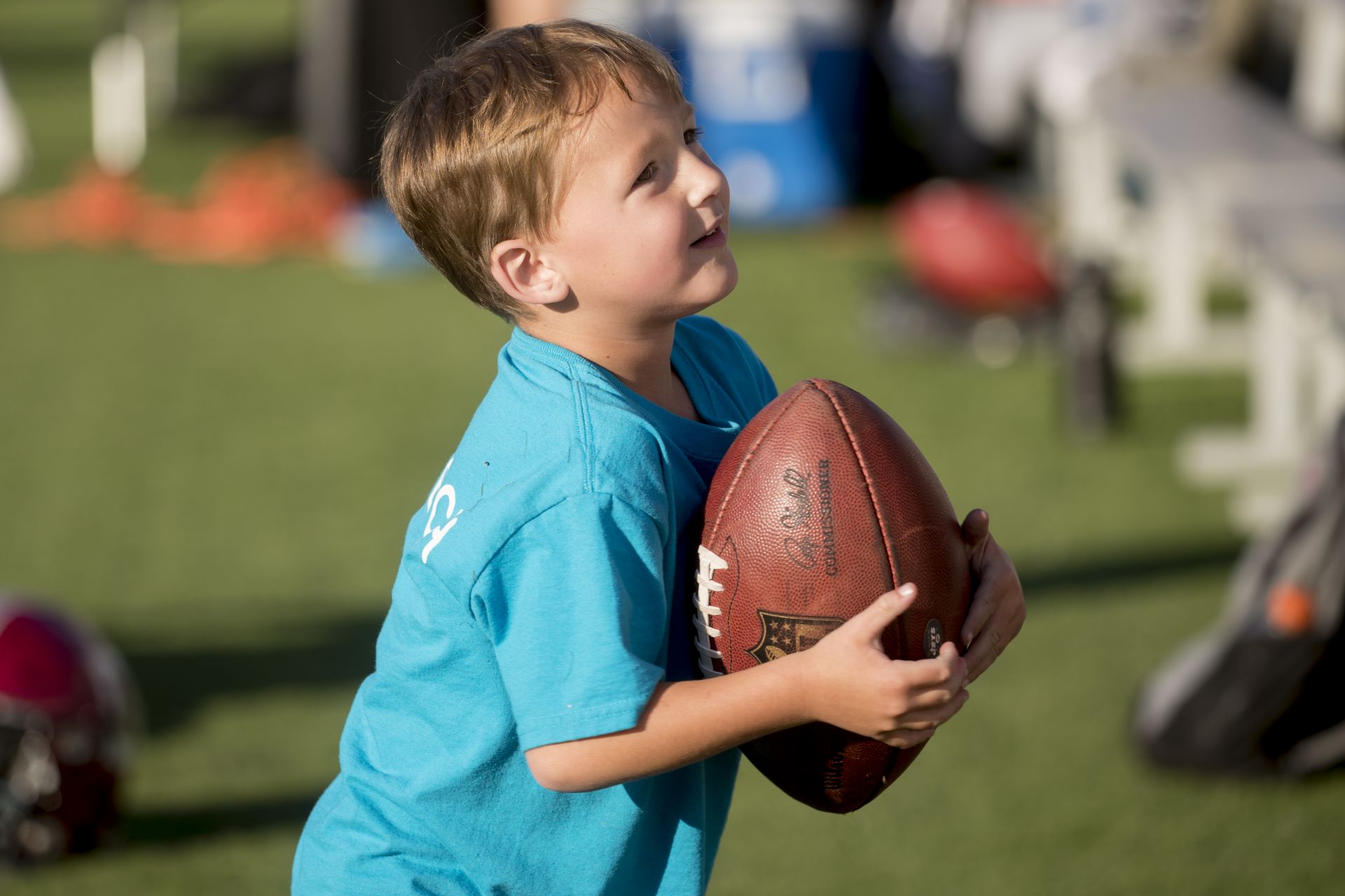 Four years after his health crisis, Brayden Austin is full of energy and joy at the Bates football practice on Sept. 19. (Phyllis Graber Jensen/Bates College)

While in the hospital, Austin suffered two major strokes and had more emergency surgeries. At one point, he was given less than a 50 percent chance of survival. Hospitalized for three months, he received his daily nutrition from a central line IV that ran for up to 24 hours a day.

“He is such a miracle,” says his mother.

Now, four years later on a warm September afternoon, a visitor to Garcelon Field during football practice simply sees an energetic little boy. Though there have been setbacks along the way, and certain treatment regimens continue, his IV line is now gone and most of his nutrition comes from eating, the rest from a stomach feeding tube.

“He is such a miracle,” says his mother, watching her son bounce around practice blocking pads on the sidelines. “He may not understand the ins and outs of the game, but he knows how amazing it is to be a part of the team,” especially when his fellow Bobcats give him a fist bump and a ‘Hey Brayden!’”

“The biggest thing that stands out to me about having Brayden around the team is his positivity,” says Angus Lamond ’21, an offensive lineman from Portsmouth, N.H. “He’s had to deal with adversity his whole life, yet when he’s around the team he’s always so happy. It reminds us all to stay positive throughout adversity.” 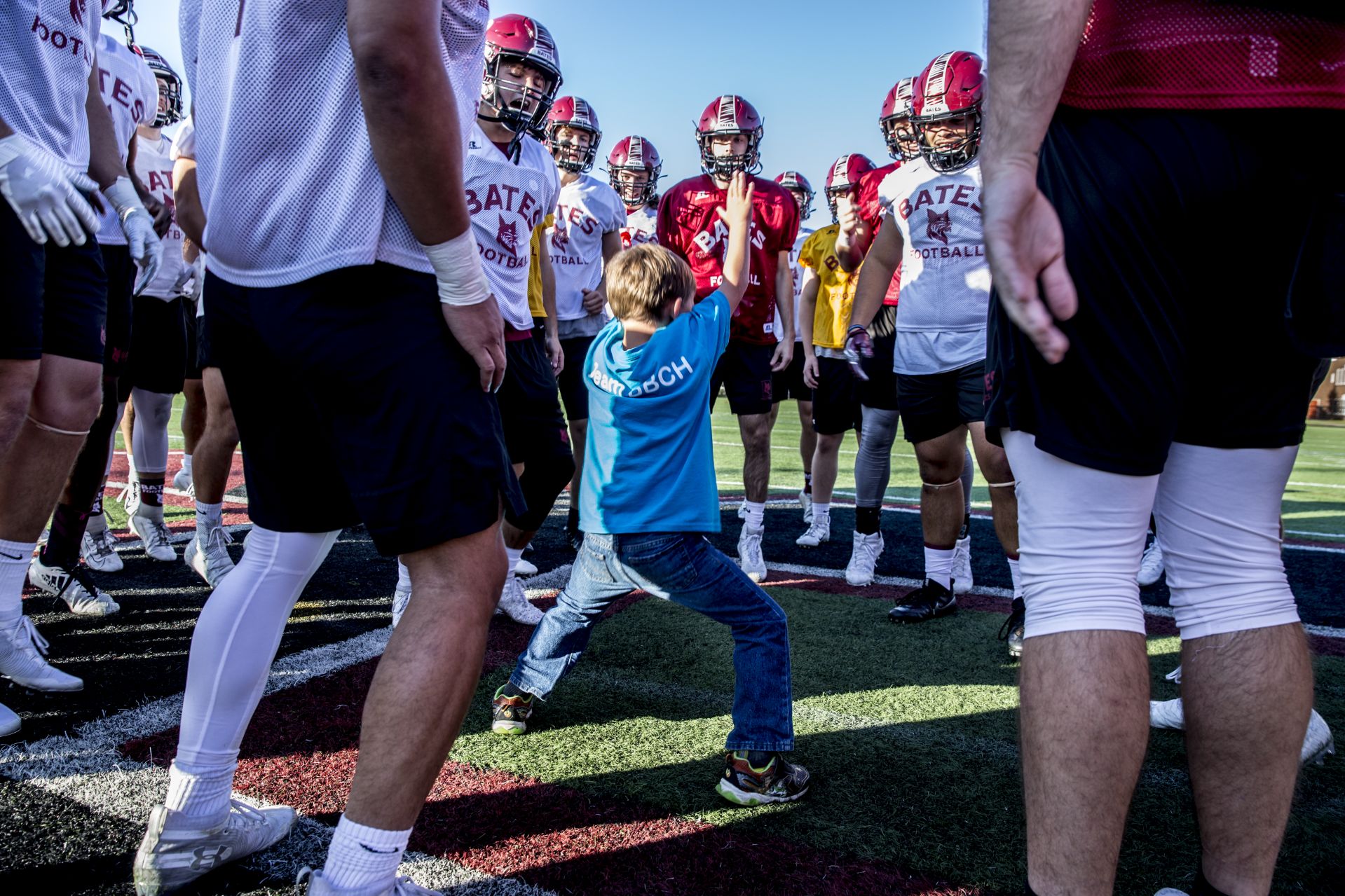 From a grave diagnosis, Austin is now thriving because he had access to expert medical professionals and a world-class pediatric intensive care unit at The Barbara Bush Children’s Hospital. And that’s how the connection between Austin and Bates football began.

“Brayden gets up each day and says, ‘Bring it on.’”

Last year, the college hosted a Children’s Miracle Network dance marathon fundraiser on campus, raising over $19,000 to benefit the Bush facility. The event organizer, Natalie Brewer ’21 of New Britain, Conn., connected Hall and Austin’s family, who live nearby in Sabattus.

“When you see Brayden, a child who has had to fight for his life, that gives you a new perspective on your purpose,” says Hall. “And I want our student-athletes to know to do things for a bigger purpose. You don’t play just for yourself.”

On Sept. 21, Austin enjoyed another thrill, taking part in the official coin toss prior to the home opener vs. Middlebury. Holding hands with his fellow Bates captains and his 10-year old brother, Carter, they walked together to midfield.

“Brayden gets up each day and says, ‘Bring it on’ to whatever the world has to give him,” says Matt Golden ’20, a running back from New Bedford, Mass.

“We look to follow Brayden’s example: If we get knocked down, we strive to get up, look our challenges in the face, and say, ‘Bring it on,’ in football and in life.” 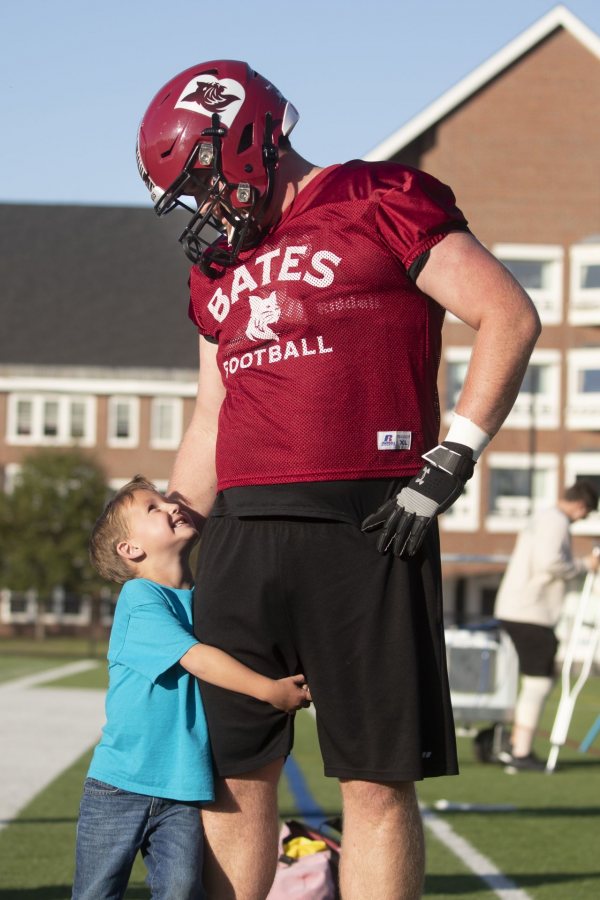 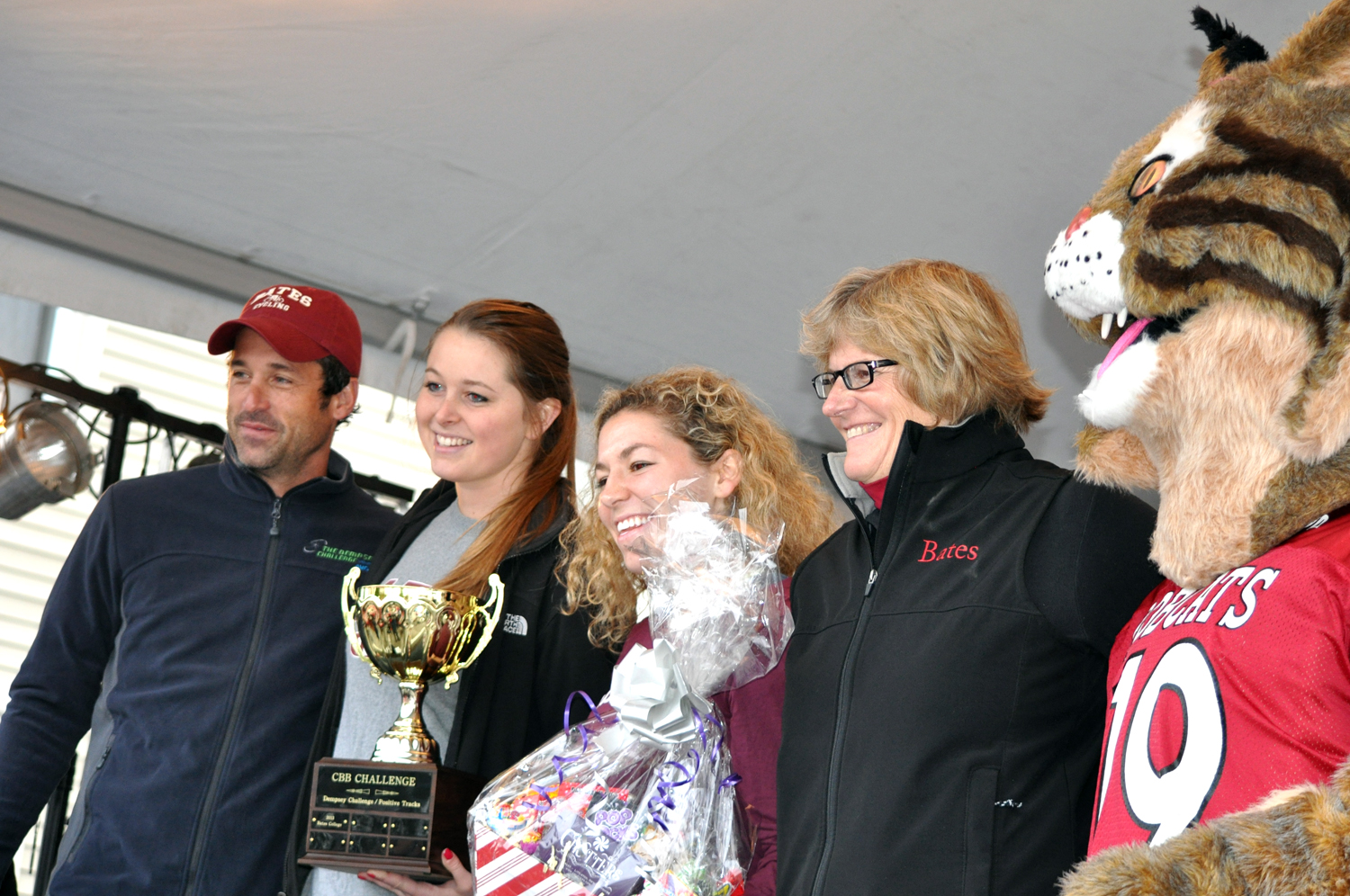