Here are a few items and images from the Muskie Archives and Special Collections Library.

Around 1910, smokers of the Turkish cigarette Murad found a college trading card in each pack (college = smoking = cool, right?).

In pursuit of the young smoker, Murad issued cards for 150 colleges. (Most NESCAC colleges were represented with Colby, Middlebury, and Connecticut College the exceptions.)

The card for each school shows the college’s seal, a pennant with its name, and, typically, an athlete in a sport that was well-established by the early 1900s, like baseball, football, or track and field. A few depict athletes in “newer” college sports like hockey or basketball.

Meanwhile, some other cards, including the one for Bates, show a hunter or fisherman. 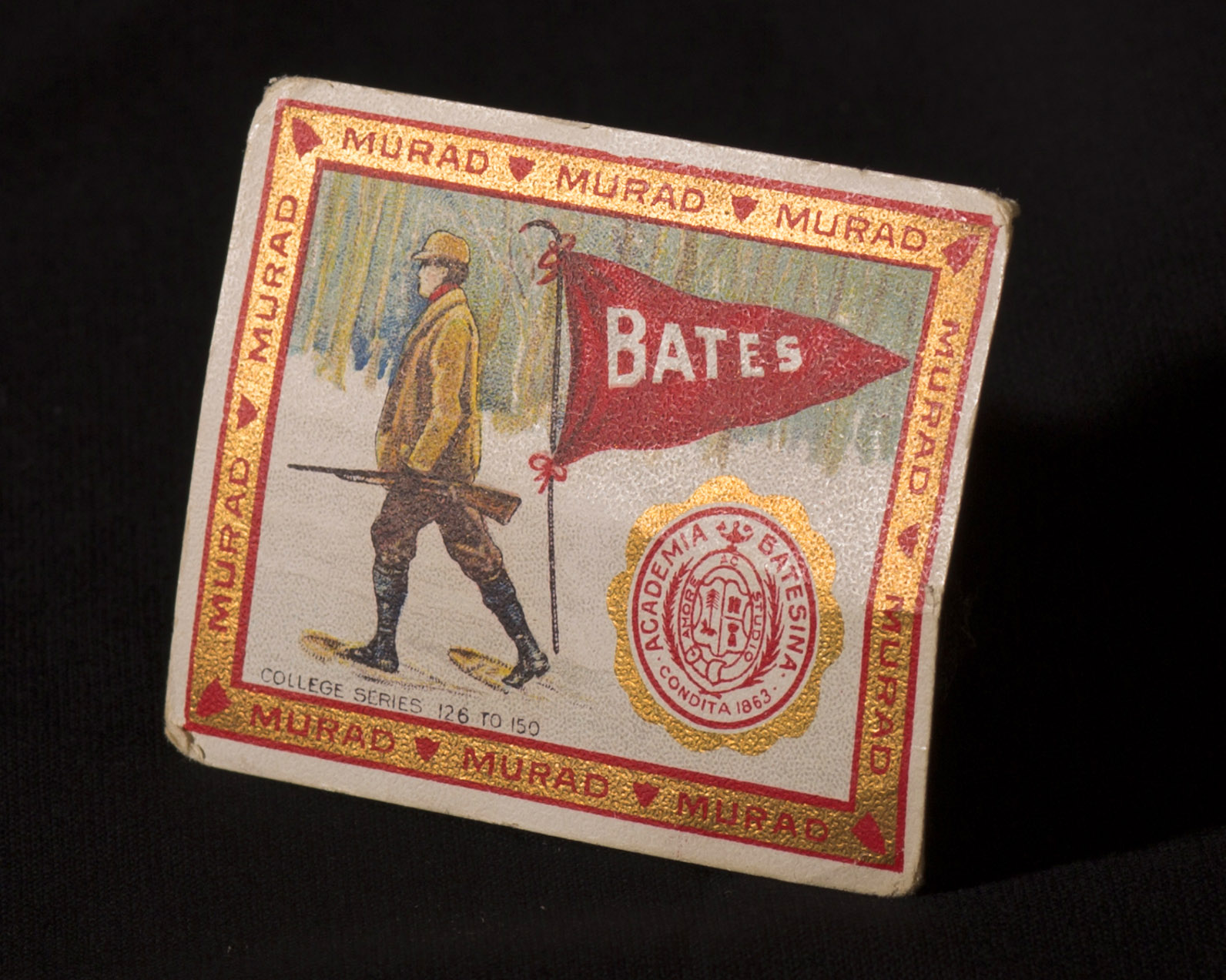 The engraved text on this trowel notes that it was “used on Dec. 14, 1925, in the laying of the cornerstone of the Athletic Building given by William Bingham II.”

Bingham, a philanthropist who lived in Bethel, Maine, requested that the building be named for President Clifton Daggett Gray. 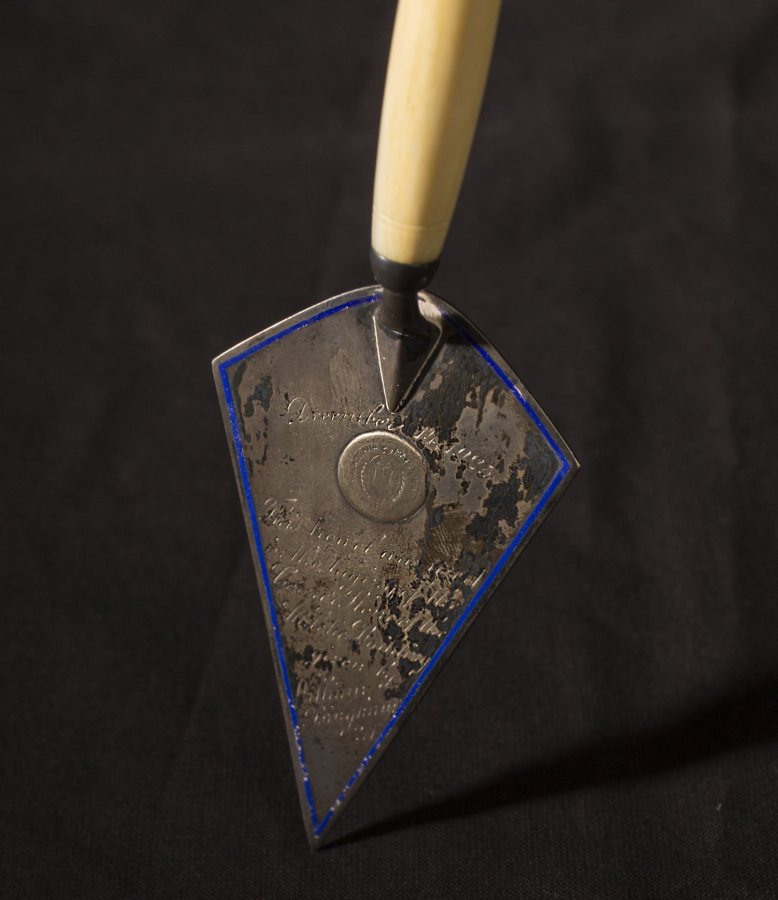 This trowel was used during the laying of the cornerstone of the Gray Athletic Building in December 1925. (Mike Bradley/Bates College)

Held on a Monday morning, the cornerstone ceremony was attended by the entire Bates community, which marched to the site en masse after chapel services.

In its advance story, The Bates Student reported that the respective president and vice president of the senior class, Kirby Baker ’26 and Elizabeth Stickney ’26, would assist Gray with the cornerstone installation.

The Student noted that the ceremony would conclude with the singing of the Alma Mater, “led by the college band, which will be called out especially for the occasion after disbanding for the winter.”

The Student was all in when describing the need for the new athletic building, both to support current students and as a “potent force in attracting preparatory school athletes of prominence” to Bates. 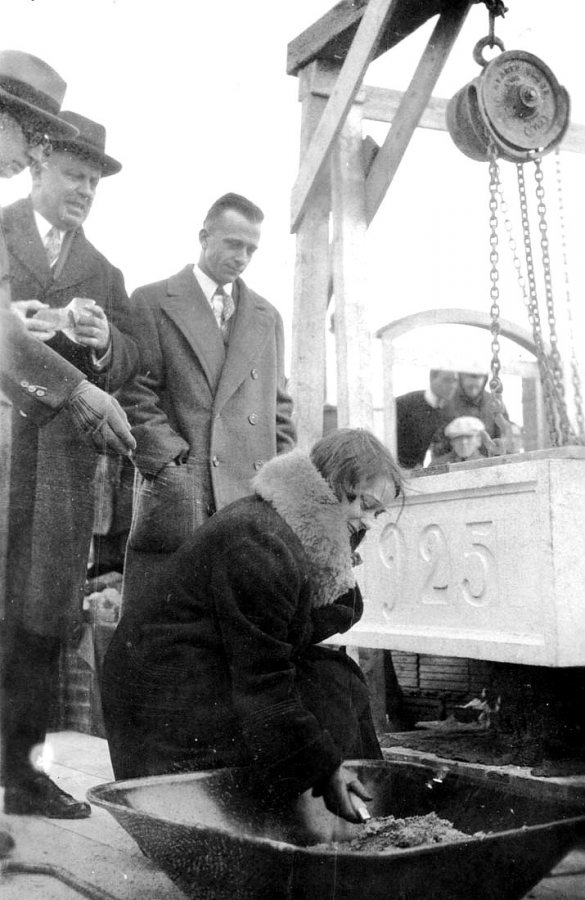 This could be Elizabeth Stickney ’26, senior class vice president, using a trowel to place mortar during the laying of cornerstone for the Gray Athletic Building on Dec. 14, 1925. President Clifton Daggett Gray, the building’s namesake, is second from left. (Muskie Archives and Special Collections Library)

It might be hard for later generations to comprehend just how ubiquitous — at least in some segments of American society — the peace sign was during the height of the U.S. anti-war movement 50 years ago.

Designed in 1958 in England to support nuclear-weapon protests, the peace sign was everywhere and anywhere, such as on snow-covered Lake Andrews in this photo, which appeared in the 1970 Mirror yearbook. 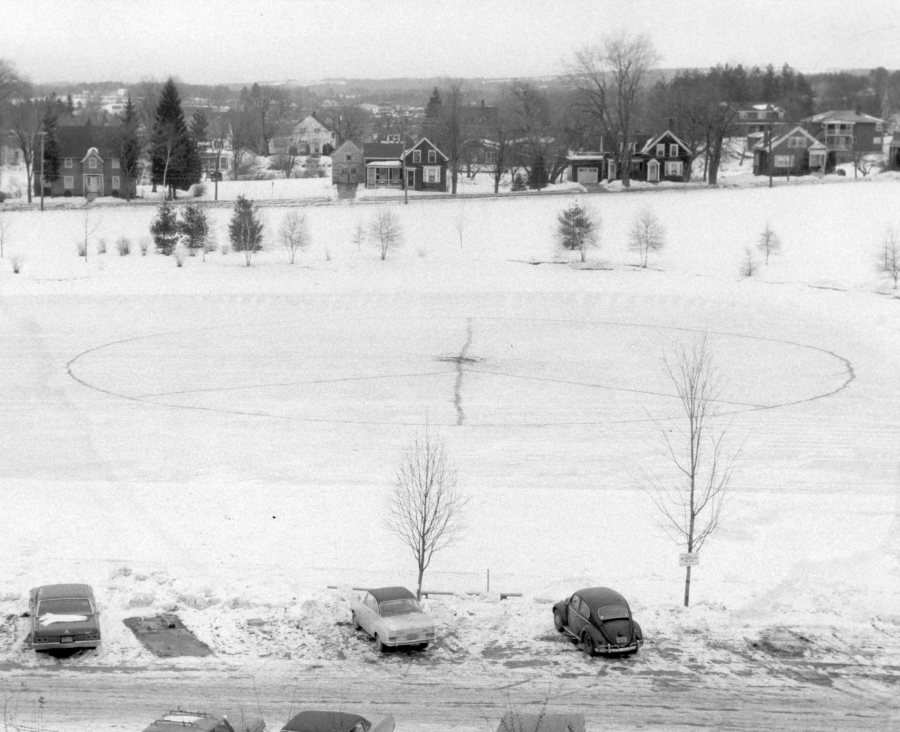 This Bates Varsity Club paddle, owned by the late Don Webster ’41, has a few doodles and signatures.

One doodle reflects how boxing once gripped the full attention of Bates students, not to mention the nation. It depicts Joe Louis’ defeat of Al McCoy on Dec. 16, 1940, at the Boston Garden. 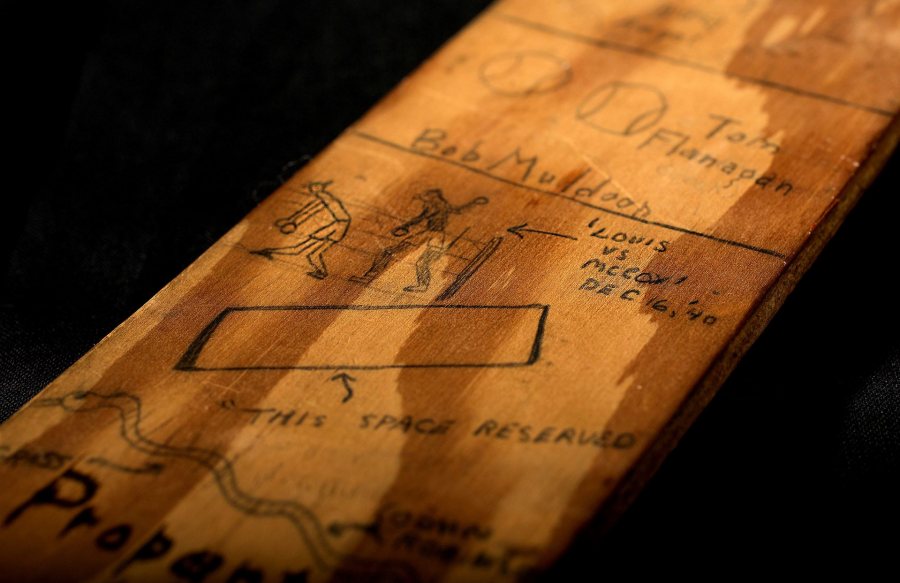 Similar to fraternity paddles, this paddle was used in Varsity Club initiations, which apparently did feature physical hazing, according to this 1938 story in The Bates Student (see page 3) by George Lythcott ’39.

Lythcott happens to be the father of author and educator Julie Lythcott-Haims, whose memoir, Real American, was the Common Read for the Class of 2022. 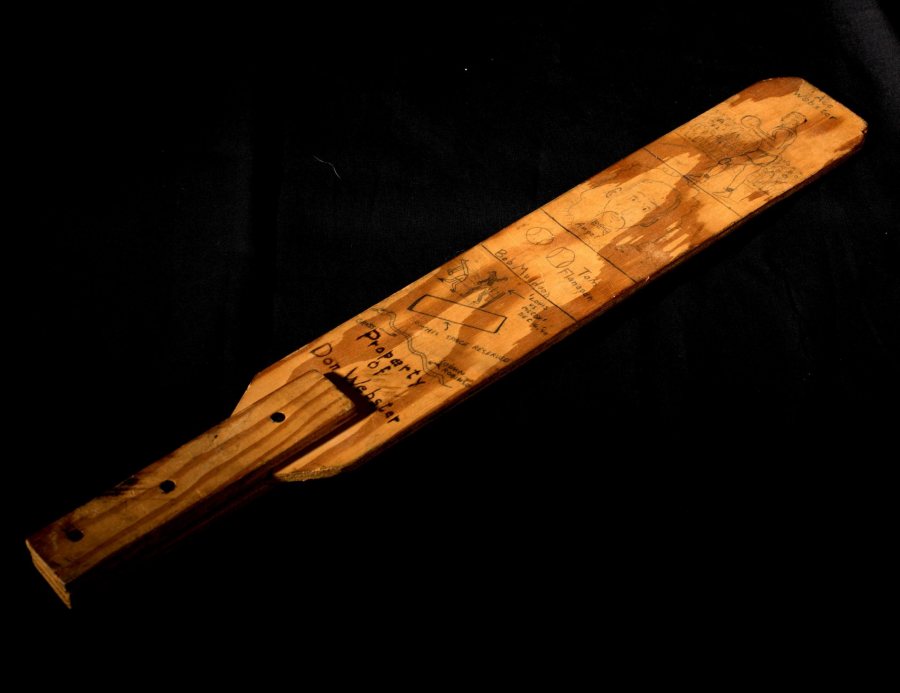 Paddles like this were part of Varsity Club initiations circa 1940. (Mike Bradley/Bates College)

Straight from the suede-loving ’70s is this silver sculpture within a rough-out leather display box, which was presented to Bates in 1973 as a Maine State Arts Award honoring the design of Ladd Library.

The sculpture was designed by Fay Golya of Augusta, Maine.

The award praised Bates for “a rare refinement of taste and a willingness to commit substantial resources to an unseen result,” a nod to Bates taking a chance on a modernist design for its new library.

The building’s principal designer was the late Sally Harkness of The Architects Collaborative; she also designed Olin Arts Center. 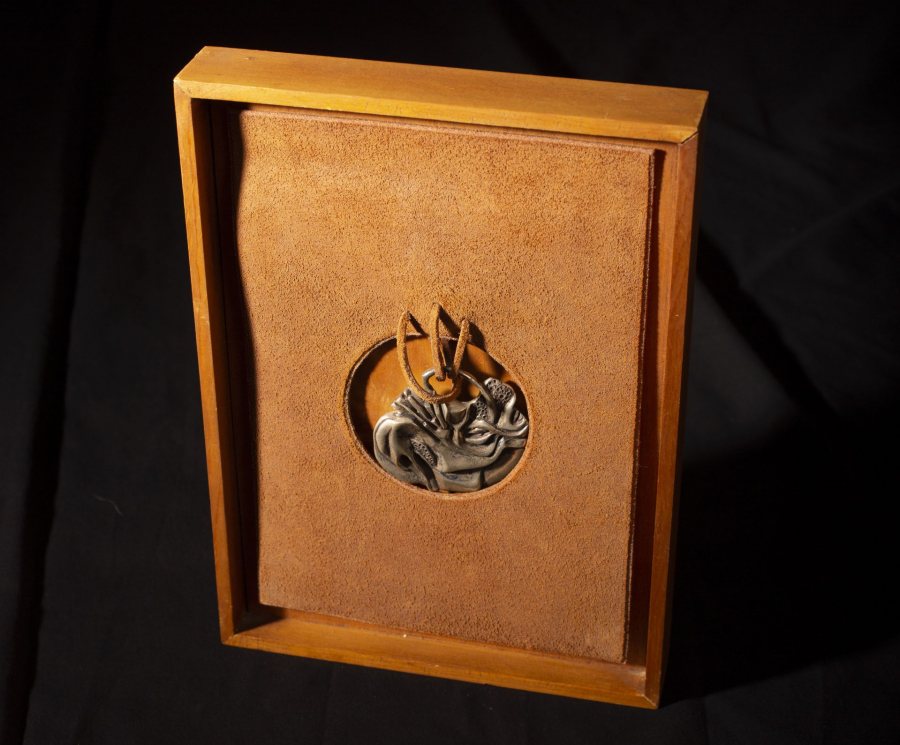 This silver sculpture was presented to Bates in 1973 as a Maine State Arts Award honoring the design of Ladd Library. (Mike Bradley/Bates College)

Categories Society and culture
Tags From the Archives
View Comments

From the Archives: Bates nurses, Julia Child, and a German ace