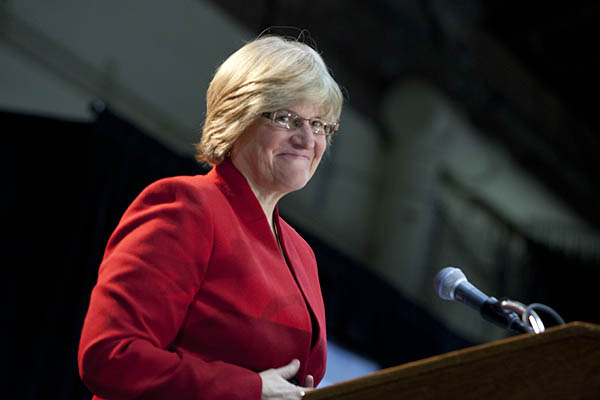 For Clayton Spencer, Bates College’s next president, the process that brought her here “was not a search at all,” as she told the campus community during her introduction to the college on Dec. 4.

“It was a case of love at first sight.”

And Bates is inclined to love her right back, if the effusively warm greeting that Spencer received during that all-college gathering was any indication.

Elected the previous day by unanimous vote of the Board of Trustees as Bates’ eighth leader, Spencer met the college in an event that drew a standing-room-only crowd to the Gray Athletic Building and culminated a week of intense covert preparation and excitement.

In her first speech to the college that she will oversee starting July 1, Spencer laid out the challenges facing the college and higher education in general. She reminded her listeners of the value of a liberal arts education, and Bates’ bold role in advancing that education.

“More than ever,” she said, “we need the frameworks provided by the liberal arts” to connect values, knowledge and action — in the words of the late Rev. Peter Gomes ’65, who “said it better than anyone could, we need to learn “to live in the full implication of our human gifts.”

And she offered a call to action, asking the college “to embrace with energy and confidence what the college already does so well, even as we challenge ourselves — always — to do better.

“And, finally, we need to make sure the world knows what we’re up to. More people need to understand what a serious, distinctive and wonderful education Bates has to offer.”

Spencer moves into 204 Lane Hall on July 1, 2012. She currently serves Harvard University as vice president for policy — holding, according to The Harvard Crimson, the “most far-reaching portfolio of any Harvard administrator” besides that institution’s president. 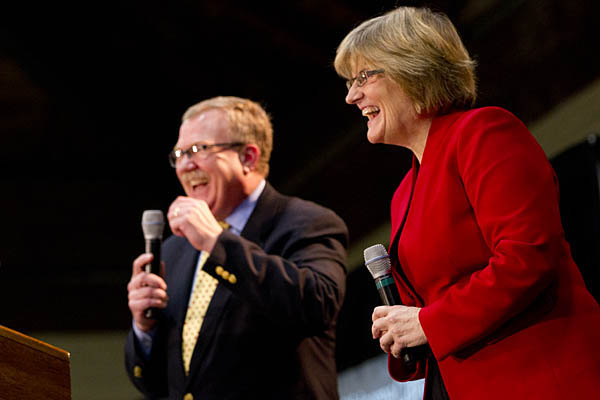 In addition to a record of strategic accomplishment at Harvard reaching back to 1997, Spencer’s resume includes six years of service to the U.S. Senate Committee on Labor and Human Resources as chief education counsel, working with the late Sen. Edward Kennedy. As an educational leader, she has taken on as a central concern the question of making higher education more accessible and affordable. Learn more about Clayton Spencer.

The gathering on a sunny, breezy Sunday afternoon was Bates-lavish, featuring jazz by the Three Point Trio, a cappella by the Deansmen and the Merimanders (who blew Spencer a kiss with Stevie Wonder’s “Signed, Sealed, Delivered (I’m Yours)”) and a reception afterward.

With Spencer’s identity still a mystery as the assembly began, Cable pointed out that the new president is only the eighth at an institution founded in 1855. “The selection of a college president is a difficult task indeed,” she told the crowd, “requiring dedication, tireless effort, a thoughtful vision for the institution’s future and a deep love of this place.”

That set the stage, conceptually and literally, for Chu. After thanking the members of the presidential search committee for their eight months of hard work, he explained the criteria the committee was obliged to meet — and offered the insight that “the committee’s assessment of candidates was remarkably congruent.”

Bonney brought some fun to his presentation of the new president, teasing the audience by almost-but-not-quite spilling her name before he summed up Spencer’s considerable accomplishments. One member of the search committee, he recalled, told her that Spencer’s “references were so amazing that he honestly had a hard time getting one of his reference calls off the phone.”

That reference called her “one of the smartest people I’ve ever met,” and “a true thought leader who can work with any constituency.” 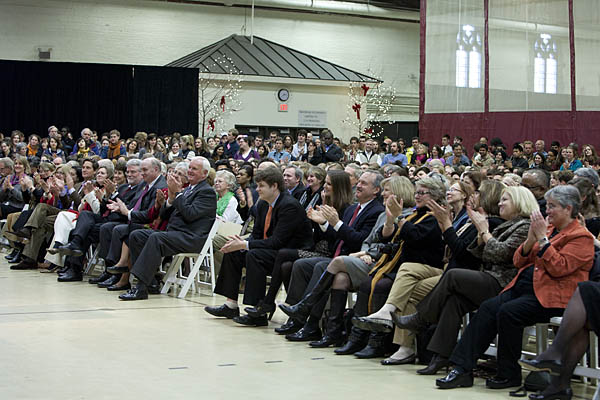 As her image flashed onto big screens flanking the stage, Bonney presented Spencer, who was met with the first of two standing ovations she received during the gathering.

If issues facing Bates and liberal arts education made up the heart of her address, she made sure to include the personal touch too, mentioning her long affection for Maine — and her awareness of real Mainahs’ feelings about folks from away.

She also said “hi” to her mother and father in Davidson, N.C., with the hope that they figured out how to find the live webcast of the event on their computer.

Daughter of a historian who served two colleges as president, Spencer said that she “learned very early to prize the special alchemy of people and ideas that communities like this make possible.

“Later, I lost my heart to Maine. You can’t imagine the joy it brings me to knit together these two deep passions, right here, with you, at Bates College, in Lewiston.”