An interview from Fall 2017 with Tom Twist, Bates College Sustainability Manager, on his path to sustainability work.

K: What do you do as Sustainability Manager at Bates?

T: My job mostly is to be a hub, I think, a hub for sustainability. There’s all this good work going on around the college that has to do with sustainability, and I want to be a convener for that work.

K: How do you plan to accomplish that?

T: Early on we’re going to do a lot of simple, finite projects to get some quick wins. The people that I’ve talked to feel like they’re spinning their wheels, as far as sustainability goes, and we instead want to build up momentum!

K: And do you have long-term plans?

T: Oh yeah, I have a lot of long-term plans. I think one of my jobs here is to help develop a simple sustainability narrative about how to get from where we are now to our goal of carbon neutrality by 2020. The plan is to develop an easy set of communally agreed upon steps. Once you have those steps, doing the work is just pretty fantastic. Once you have a narrative, everyone understands the plan so every new project isn’t another discussion about cash efficiency versus sustainability. We can have both, and that’s really the goal.

Change has to come from everybody, which is actually really inspiring.

When I first got to Bates I was walking around, and mostly I just felt very overwhelmed. We have a lot of big buildings that are very old, and I was just thinking, “How are we going to do this.” It occurred to me that the best thing I could possibly do is just empowering people who already want to do the work. I feel really good about that, and that good feeling was kind of born of despair (laughs). The college is just too big for me -or the Environmental Studies department, or the Geology Department, or any one of us- to work alone. Change has to come from everybody, which is actually really inspiring. My job is just to remove the obstacles for people to do what they already want to do.

T: Wait can I go back to more long-term goals? (laughs)

T: Yes! Really what I’m working towards is making the Bates Sustainability program one of the best in the nation. I know it sounds like an ambitious goal, but I think we could do it! I’m fully aware of the work it entails; it’s a long road, but there’s a lot of grassroots enthusiasm here. We’re all about service and human rights at Bates, and sustainability just seems like a natural part of that.

I think the hands-on nature of sustainability work can merge really well with Bates’ Purposeful Work Initiative. Purposeful Work, and programs like it, emphasizes the indispensable importance of brick-and-mortar colleges. Learning and making change as a community is, I think, one of the most important parts of a Bates education.

K: What put you on the sustainability path?

T: Sustainability just felt like the intelligent way to go, even when I was a kid. I remember when I was eleven I read in the newspaper that 35% of all landfill waste was yard clippings. That seemed totally ridiculous to me! I built a makeshift compost pile and tried to convince my parents to use it, unsuccessfully. I told them that it gets warm, and my mom was afraid it was going to burn down the garage (laughs).

My path to sustainability was sort of roundabout. It was always on my radar, but my interest really took hold when my dad passed away. His death woke me up from whatever high school stupor I might have been in. Before that I was just kind of passing time, not really aware of what was going on outside my own bubble. Having someone so close to me pass away was like a slap in the face, and I woke up. I started caring about things other than myself. I saw, very clearly, that we don’t live forever. If you want to do something, then you better get going.

As a direct result of that realization, I went to a Japanese Buddhist monastery. You know how in Bates Sustainability we’re trying to figure out how to get from A to B, well I couldn’t figure out how to get myself from A to B. I saw how I was, and I saw how I wanted to be, and there was no visible bridge that linked the two. This monastery was really great for that. Essentially I meditated everyday for two years.

I feel like every part of my life has been affected by meditation. The whole idea is to get to know yourself. I found that tremendously helpful. Most of us are just living on a habitual level, doing the same thing everyday and not appreciating the time that we have. We’re mostly just waiting for one thing to finish so we can get on to the next thing. At some point, your life has passed by!

Meditating helped me become more aware on a personal level. From a sustainability perspective, it helped me deal with the continual bad news you hear about climate change and habitat destruction. Meditating helped me realize that it’s okay to feel hopeless about that sort of thing, but it’s not okay to let it paralyze you. 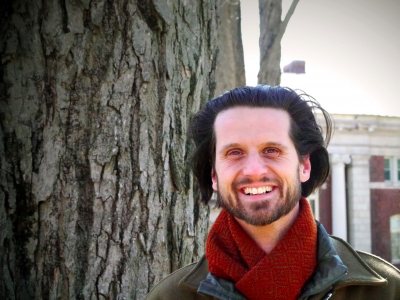 Usually, people do their same old thing until someone comes along and shows them that there’s a different way to do it. They see someone else’s example and think, “Oh! I could live my life in a totally different way.” I was just reading this section in The Power of Habit about Martin Luther King Jr. He was preaching, and he wasn’t famous yet, but the Ku Klux Klan already knew about him. The KKK blew up the front part of his house while his family was in the back. Luckily his family was okay. Dr. King got the call about the explosion, and he rushed to his house. When he got there there, were already three hundred people at the scene and more people starting to gather. It was clear that the crowd wanted to do something, probably something violent. The police showed up, but there were only about twelve policemen. That night was one of the first times that Martin Luther King Jr. started preaching nonviolence even though this act of violence had just been committed against his own family. One of the bystanders said nonviolence was a totally foreign concept for that time, which was so violent. I thought that was amazing: living in a different way just usually doesn’t occur to us until we see somebody else’s example.

Similarly, I think the sustainability movement moves all good things forward. It’s been nice watching the people in my life go from not even thinking about sustainability to thinking about it actively. That’s true of the whole world. We’ve begun to live in ways that, ten years ago, we wouldn’t have even thought possible.