Sense and Sustainability: Episode I

K: Tell me about your transition to nature writing. I know you studied poetry and creative writing in college.
E: I went to college out in Portland Oregon which has a stunning landscape and, as someone who grew up in new England in one of those families that thinks hiking is the best form of vacation, when I got to Oregon I thought, “Oh my God, this is my landscape.” I’ve always liked rain. My parents always say that I was born and it rained for two weeks. In Oregon, there are these great lush trees, and something that’s very humbling. It’s nature that’s big enough for me not to matter anymore. I like that.

Exploring how nature and literature overlap grounded in my undergraduate education, but I think by the point I was writing my senior thesis I realized, “Am I going to be just another nature writer from the West Coast?” That seems like (A) a hard field to break into because everyone in Oregon wants to write about nature, and (B) my nature writing isn’t good enough to compete. Initially straying from that dream was a very pragmatic decision. My thesis was about how the female body articulates itself in space and through language. It took a lot of my own response to the natural environment in Oregon and put it in a more gendered conversation.

After college I moved to Vietnam. Actually, first I rode my bike to Alaska by myself and went through bigger swaths of think woods than I’d ever seen before in my life. Sometimes I rode for six days between towns. I saw lots of bears.

Then I moved to Vietnam and lived in this massive city of 8 million people. I started working for an art foundation that supported controversial North Vietnamese artists and I was essentially the writer for the foundation. 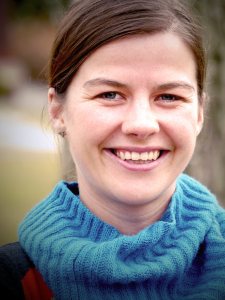 K: Was it the job that drew you there, or did you go to Vietnam and then get the job?

E: I knew that there was this really interesting artistic revolution happening in North Vietnam where painters were finally able to paint what they wanted. Up until 1989, they had had to paint Soviet realist art in service of the state. As the country opened, a private market for art emerged and the rules on censorship were loosened. I worked there, and I realized very quickly that I could write and make a living doing nonfiction writing. I started doing long form articles for Le Monde Diplomatique, which is basically the French version of Harpers. I started out writing a lot about art, infrastructure, and the built environment, and how those three things were shaping the future of South East Asia. Le Monde Diplomatique sent me to the border of Bangladesh to report on cattle smuggling, I got set to North India to report on water sharing in the Ganges… I got sent all over the place to do these stories.

K: Did those assignments reaffirm your interests?

E: My hypothesis has always been that Le Monde Diplomatique sent me on stories that were not policy heavy but rather ones that involved going to out-of-the-reach regions and getting people to talk to me. I didn’t meet my editor for 2 years. When we finally met, I think she was shocked at how young I was. I think it also clicked into her mind about how I was getting my interviews. I appeared very nonthreatening compared to a lot of other people they work with frequently—mostly 45 year-old French men. Through out my time in South East Asia I was really happy when I got sent on assignments outside the city. Working on my first book, which was on the former capital of Myanmar, I spent two years in this rapidly developing multimillion person city, as well as two years in Hanoi. As interesting as that was, the city has always been hard on me. I did move to NYC after that, but all these were strategic decisions.

I moved to NYC and started to write about sea level rise. I thought, “If I’m going to live in a city, I want to have a beat, a niche, that really gets me out.” I felt like I had paid my dues enough and gotten enough publications that I didn’t just have to write about Myanmar, the only place where every magazine didn’t have a correspondent. I could write about what I wanted. I thought, “Maybe I can be a nature writer now.” At that point I felt like I wasn’t just one writer of 100 million in NYC. I had connections, clips, work… So I polished my boots and started working the NYC scene. Right now, I’m actually where I wanted to be when I left college. The path was maybe unconventional, but I’m very grateful for the way that’s expanded my worldview and the way I think about nature. I’ve grown to problematize a lot of the narratives that I used to really love. Now I’m writing a book about sea level rise.

K: I want to use this blog to continue to problematize some of those narratives and I’m not entirely sure how to do that. I think there are interesting ways to bring race, gender, and economics into the conversation. What do you think?

E: It’s true! Here we are, two excited white people in a beautiful college! I think there are multiple ways to answer that question. The sea rise book I’m working on takes place almost entirely in indigenous communities and underserved communities. They are the ones that are most affected by climate change. If we look at wetlands, they are the first ecosystems to go under. This country has tended to put people traditionally underserved by society in and around those areas that are not fit for the kind of infrastructure and buildings we now depend upon. Now they’re the first ones to feel the crunch of sea level rise.

K: Did you ever feel uncomfortable in communities that you didn’t feel representative of, interviewing people who have just had very different life experiences?

E: I think one of the most important things that I’ve learned is that you have to make yourself vulnerable if you’re asking other people to make themselves vulnerable to you. I remember when I was spending a couple of months with a Native American community on the Louisiana Bayou. Beasts of the Southern Wild was vaguely based on them, they had had a lot of media coverage in general. I think they were sort of “up to here” with it. At that moment, I was leaving a long-term relationship, and I told them about grappling with my decision to leave. I said, “You’re staying in this place that you love even though it’s shifting under your feet in violent ways that you didn’t expect. How do you play with the decision to stay or go?”

If you don’t make yourself vulnerable in meaningful ways, it seems like you’re just trying to record their lives as a set of problems. It feels like you’re the knowledge from on high that just comes in and leaves.

K: I know that you’re going to be the writer in residence at Andrew’s Experimental forest this summer. Tell me about that.

E: I’m very excited about that. I will spend a couple weeks in the forest, have a little cabin, and write about three sites around the forest that I will visit periodically while I’m there. They invite one writer every year and it’s a project that will last 200 years. That’s the amount of time it takes for a Doug Fur to decompose once its hit the forest floor, sprout, and turn into other growth. So, 200 years really represents the life cycle of this forest. 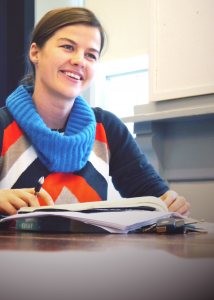 K: When you write about a subject for so long, do you find that you become repetitive with your language? Do you feel like your language evolves? How do you keep your writing fresh?

E: For two to three years, I wrote straight nonfiction prose about sea level rise, which, as a style, really doesn’t have much poetry. Then, at some point, a switch flipped and I knew how to write lyrically, I knew how to write in poetry. I knew the kinds of symbolic language to use. One of the essays that I’ve been working on is called, “Something Like Vertigo,” and it reads my father’s struggle with vertigo, a loss of knowing which way is down and a spatial orientation in the world, as an analogue for sea level rise. It’s about how people react when the physical world changes enough to make everyday tasks fundamentally different but still appears like the same old world that you used to inhabit. I’m also writing about rot and how the earth rots, and thinking about all sorts of processes of decomposition. Its something we’re all familiar with, but what does it mean when literally our shores are rotting?

K: I had an English teacher in high school talked about every new idea in terms of decomposition: he said that every time you create something new, you have to take apart what you’ve made before and put it to sit in a fertile place until it espouses new ideas. I really like that.

E: Maybe that’s like the switch that flips. You write it all, then you pull it apart and let it sit, and all of a sudden it turns into a daffodil.