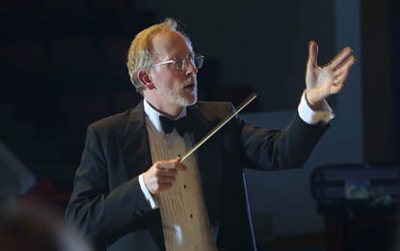 In a landmark musical event, Bates College and the Maine Music Society will muster some 260 musicians for an evening of music by Johannes Brahms, including his exquisite Deutsches Requiem, at 8 p.m. Saturday, March 31, in the Basilica of Saints Peter and Paul, 27 Bartlett St.

The concert is the first collaboration between the Maine Music Society and the college, both notable presences in Maine music. The link is John Corrie, of Lewiston, who has directed the Bates College Choir since 1986 and became artistic director of the music society last spring.

In addition, this is the first time in recent memory that Brahms’ Requiem has been sung in the Lewiston-Auburn region with full orchestra and in the original German. (The printed program will include a full translation.)

Choral groups from the high schools of Lewiston and Auburn will also perform. Maine Gov. John Baldacci and Bates President Elaine Tuttle Hansen are scheduled to make opening remarks at the event.

For the general public, tickets cost $17.50 at the door and $15 in advance, available through the L/A Arts box office at 207-782-7228. Admission is free to students with valid ID, but tickets are required and reservations are strongly recommended. To reserve student tickets or for general information about this event, please call Bates College at 207-786-6135.

To open the program, Corrie will lead four choirs in two motets by Brahms, Schaffe in mir Gott (Op. 29, No. 2) and Warum ist das Licht gegeben dem Muhseligen? (Op. 74, No. 1). The choirs are the Bates College Choir, the Edward Little High School Chamber Choir, the Lewiston High School Concert Choir and the Androscoggin Chorale, one of the music society’s two performing ensembles.

The remainder of the program is Brahms’ Ein Deutsches Requiem (Op. 45), sung by the Bates and Androscoggin choirs and soloists Bonnie Scarpelli, soprano, and Peter Allen, baritone, both well-known to Maine audiences. (Allen is a member of the Bates class of 1966.) 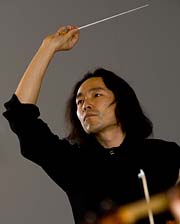 They will be accompanied by a 60-piece orchestra composed of the Bates College Orchestra and the Maine Chamber Ensemble, the other performing arm of the music society. Hiroya Miura, of the Bates faculty, will conduct.

First performed in its seven-movement entirety in 1869, Brahms’ requiem is a consistently popular entry in his catalog. In its sophistication and complexity, the music marked a turning point in 19th-century composition.

“It’s a massive piece, and it needs this many players in the orchestra and singers in the choirs,” Corrie explains. It’s also highly challenging, he notes, but very gratifying, especially for the singers — as he knows first hand. In addition to directing the choirs and coordinating all the performing organizations for the concert, Corrie is singing with the tenors in the work.

“It’s just a glorious piece with such spectacular melodies,” he says.

Miura, who in 2005 first suggested that the Bates ensembles join forces for the piece, says that the work speaks to him in both personal and musical terms. From the purely musical standpoint, Miura — a composer himself — is intrigued by the overtones of Beethoven in this early Brahms work, as well as by the composer’s use of dark string colors contrasted against bright timbres from harp, winds and soprano voices.

“What’s also fascinating is that he took more than 10 years to write this piece — and despite that, it sounds so coherent,” Miura says.

In a more personal sense, the conductor is drawn by the work’s moral themes. The texts, which Brahms chose from the Old and New Testaments in the Lutheran Bible, deal with loss, consolation and a transcendent hopefulness for humanity. Miura says that for him, the performance will honor the memories of three musician friends, now deceased, whom he knew from Montreal, where he worked as a church organist for several years.

The Maine Music Society was founded in 1991 to support the artistic and educational activities of the Androscoggin Chorale, formed in Lewiston in 1972 as a community chorus, and the Maine Chamber Ensemble, founded in the late 1980s to support the chorale.

The society has attained a solid reputation for artistic excellence. Notable achievements include a 1994 performance of Beethoven’s Ninth Symphony, which drew nearly 2,000 concertgoers to Lewiston and Brunswick; a 1992 production of Amahl and the Night Visitors, a professionally staged, full-scale opera; and the consistently popular annual Christmas at St. Peter’s concerts. For more than a decade, the society has presented the annual a cappella showcase called Battle of the Blends, attracting top ensembles from all over New England. 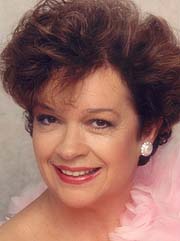 Scarpelli, of Portland, has been described by a Boston Globe critic as a “versatile and gifted singer” and “a singer of exceptional beauty of tone and security of technique.” Well-known to Maine audiences, she has sung major operatic roles, solo works with orchestra, works with chorus and orchestra, and in chamber works ranging from early to contemporary music.

She was guest soloist with the Boston Philharmonic Orchestra for Richard Strauss’ Vier letzte Lieder, and has frequently performed with the Surry Opera Company in Maine, France and Russia.

Allen, of Gorham, has sung in recital, operatic, musical theater and symphonic settings. He previously worked with the Maine Music Society in such music as Bizet’s L’Enfance du Christ, Handel’s Belshazzar and Messiah, Gounod’s Mors et Vita and the requiems of Faure and Durufle.

With the Portland Opera Repertory Theatre, Allen has sung solo roles in Bizet’s Carmen and Puccini’s Madama Butterfly. He has been a guest soloist with the Choral Art Society, Portland Symphony Orchestra, Saengerfest and Masterworks Chorale of Lexington, Mass., the Oratorio Chorale and the Midcoast Symphony Orchestra. He is a recipient of the Lillian Nordica Award and was a member of the Cornish Trio, a Renaissance a cappella group, and the Bel Canto Quartet.