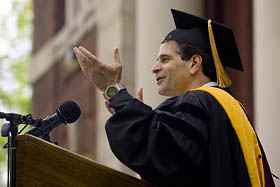 “If you want to solve all the problems that we’re facing in this world, it’s unlikely that the people and ideas that got us to where we are will be the ones that are going to get us to a different place,” Segway inventor Dean Kamen told 464 graduates at Bates College’ 141st Commencement ceremony.

“It’s going to require new people with new ideas. And that would be you,” Kamen said in one of the ceremony’s biggest applause lines. (See the honorands’ addresses and citations, slide shows and videos).

Inventor-entrepreneur Kamen was one of four honorary degree recipients at the ceremony, which took place under gathering clouds on the college’s historic Quad. The other honorands were children’s book illustrator-author Eric Carle, actress-writer Anna Deavere Smith, and Corey Harris, a respected roots musician who graduated from Bates in 1991.

In her fifth Bates Commencement, President Elaine Tuttle Hansen led the ceremony. “This ceremony celebrates you, Bates graduates — your habits of mind and soul, and our enduring pride in you,” she said. Hansen concluded by asking the assembly to applaud the people — parents, grandparents, “special others” and faculty — who had done so much to support the students in their journey to this day.

The first of the day’s honorands, Carle may be best-known for his 1969 book The Very Hungry Caterpillar, which has eaten its way into the hearts of millions of children worldwide. Since Caterpillar, Carle has illustrated more than 70 books, many of them best-sellers and most of which he also wrote. More than 75 million copies of his books have been sold around the world. 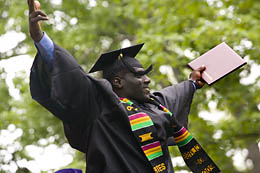 Carle, who dropped out of school at 16, told the graduates of his “unerring confidence that, when I grew up, I would draw pictures.” He said, “I must warn you that following your dream comes with a price.” In his case, that price lay in not learning much about other subjects, such as math and Latin, that would have served him well later in life. “I regret that,” he said.

Carle also explained how he came to write Caterpillar, getting the idea as he punched holes in a stack of paper. “The holes made me think of a bookworm, and with the help of my good editor, the bookworm became a caterpillar” and the subject of his breakthrough book.

“You see, a good editor, a hole-puncher in good working order and a little bit of luck will take you a long way,” Carle said.

“I was asked to write a speech, but instead I’m just going to talk to you,” Harris began. Sixteen years after his own Bates graduation, the 38-year-old musician returned with a resume that includes well-regarded CDs exploring the spectrum of African-influenced New World music and a central role in a episode of Martin Scorsese’s 2003 PBS series The Blues.

Harris recounted his very first visit to Bates, when this college in a small Maine city seemed like “an outpost. I felt like I was somewhere in the North Pole.” Coming from what he regarded as an insular community in Colorado, “it’s funny that I chose Bates to see the world,” he told the graduates. “But, when I look at you all, I can see that you are the world.”

Harris credited Bates with increasing the diversity of its campus community, while reminding the graduates that in his view, if one considers the world as a whole, “there’s no such thing as a minority.”

He said, “It was at Bates that I got to interact with people I never thought I’d interact with . . . This was my jumping-off point to discover the world.”

Kamen’s Segway personal transporter is the best-known of a string of sophisticated innovations that more typically aim to improve the lives of medical patients and people lacking access to basic necessities of life. College graduates are often exhorted to go fix the world, but Kamen was unusually blunt about what needs fixing and how the worst problems stack up against the worries that graduates may have, such as how to repay college loans.

Kamen reminded his listeners that “a billion people live on less than a dollar a day. And four billion — that’s two-thirds of humanity — on less than two dollars a day.”

He pointed out that the people with the education and privilege to be effective leaders are an “incredibly small minority of this planet. They have a huge advantage in the leverage they have and the control they have.”

In the traditional verbiage that colleges use in presenting honorary degrees, honorands are accorded all the “rights, privileges and responsibilities ” that pertain to the honor. Kamen had opened his address by saying he wanted to know about those privileges. But Smith, known for writing and performing plays that comment on American race relations and other social issues, jokingly responded, “I still want to know what the rights are.”

Taking community as a theme, Smith asked the students to think of community as the people not just close by, but the ones they can possible reach. “What’s so important is, how long is your reach?”

“Many of us have been educated to celebrate our own identities and to celebrate that which we understand because that’s what we came from,” she said. But she challenged her listeners to “come out of your safe houses of identity . . . to a state that I call the crossroads of ambiguity, where there is no house, where it is not safe.”

She recounted how, as someone who has stayed in plenty of hotels, she saw no point in opening the curtains when she entered her room on at the start of her visit here. Later she changed her mind and opened the curtains, realizing that daylight would help her get up in the morning.

“When I woke up this morning I saw that extraordinary waterfall,” the Androscoggin River’s Great Falls between Auburn and Lewiston. “Even at the moment when we think we know something, if we stop to open the curtains, to open our eyes, to open our hearts in another way, there just might be that waterfall. And that waterfall might lead to a new thought or a new spirit.”

The 464 members of Bates’ class of 2007 consisted of 249 women and 215 men. Fifty-five were Maine residents, out of 249 New England residents. One hundred eighty five came from other states, and 30 from other countries.

The most popular subjects in which members of the class of 2007 majored were psychology, with 51 graduates; political science, with 50; and economics, with 41. Fifty-two students took double majors.