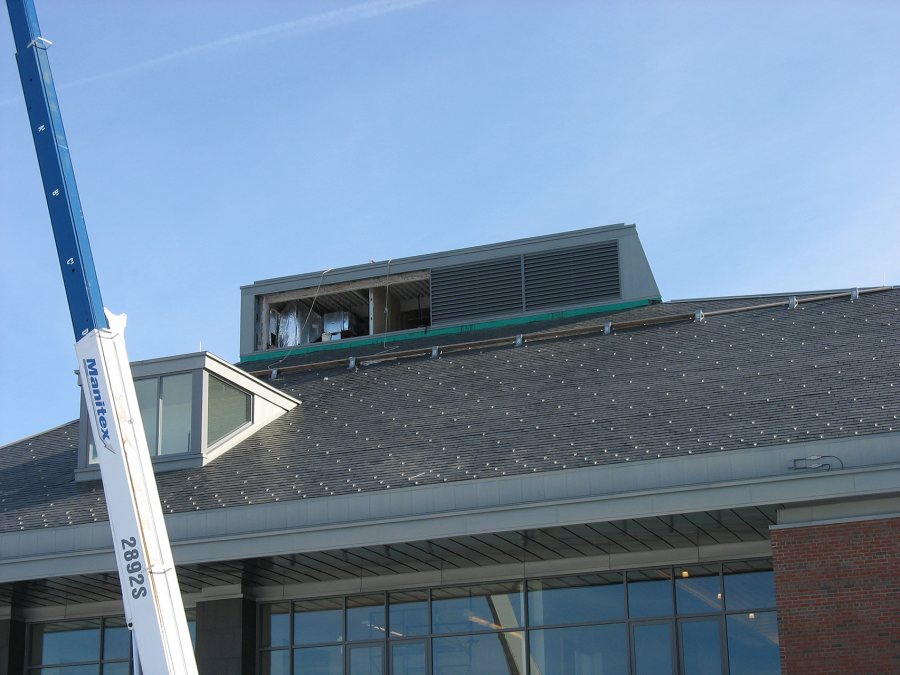 With two louvers in place on the new Commons’ ventilation monitor, the crane has gone back for the next load. (Doug Hubley/Bates College)

A mechanical engineer, Farnsworth especially appreciates the ventilation scheme. There’s no building-wide air conditioning per se. Instead, it’s essentially a natural system, he explained: the high-peaked main dining hall and an adjacent airshaft will create a chimney effect to pull fresh air in through windows that can actually be opened — an unusual feature these days in large new buildings.

The rising air will exit through the ventilation monitor, that big box on the roof. The air handling isn’t entirely natural, as the monitor contains big exhaust fans that will give nature a boost on the warmest days. Also in the monitor is a clever device that can direct rising air either straight outside or, on cold days, back down into the building so its heat won’t be wasted. 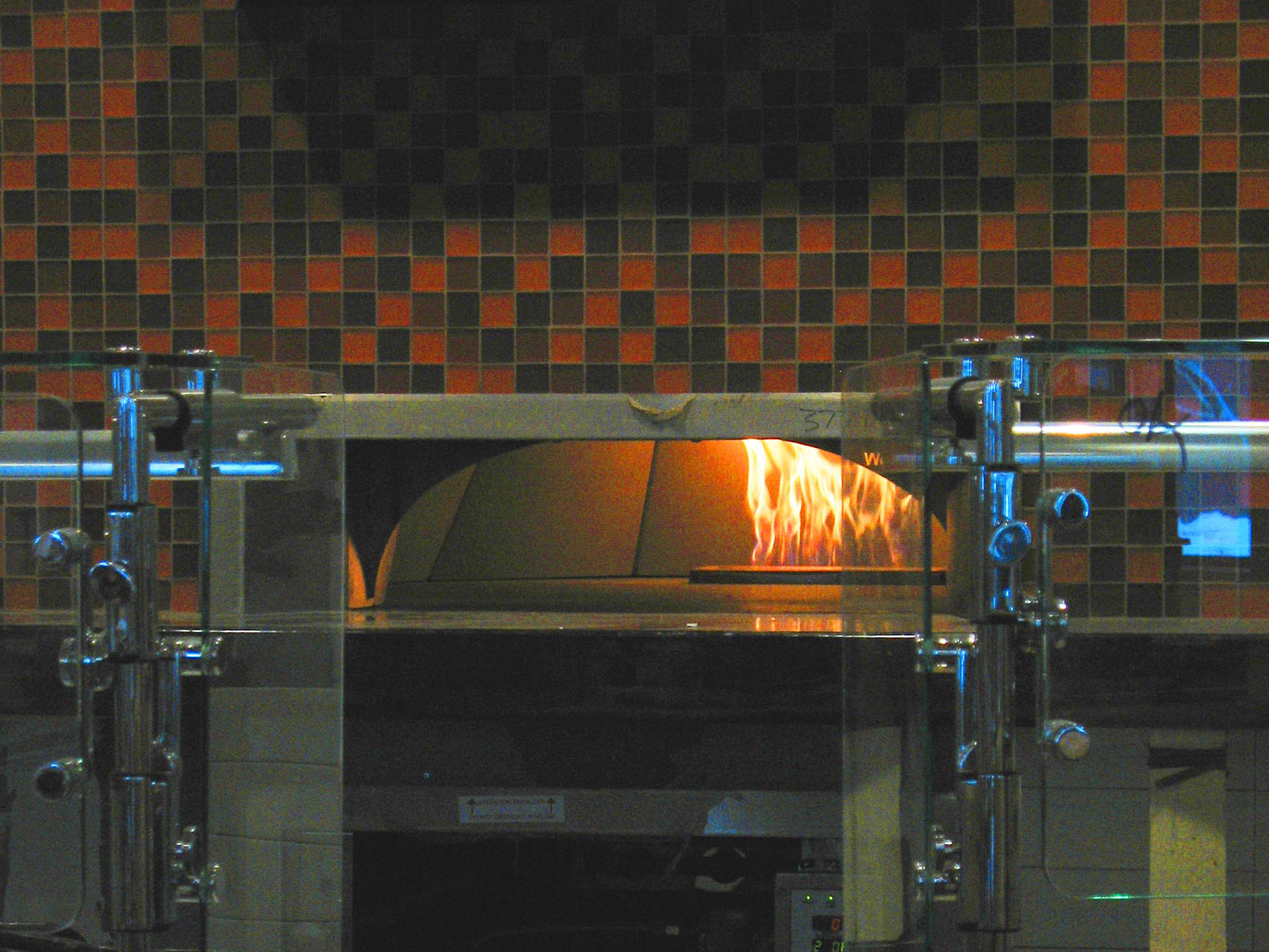 A test burn in the brick oven in the new Commons. (Doug Hubley/Bates College)

Farnsworth also appreciates the sheer volume of the new Commons, especially that soaring dining hall and the 3,200-square-foot mezzanine that overlooks it. The building, he laughed, is “anticlaustrophobic.”

Finally, he said, “the level of finishes is special.” He pointed to the dark-gray granite that lines the main stairway and covers other walls, and to the pale maple wood throughout the interior, appearing as a veneer on the walls and as trim around doorways and on handrails.

In the realm of special finishes, we add another nominee: the tiles in the servery area. These include expanses of gleaming white wall tile and clusters of smaller glass squares in vivid splashes of mixed color.

The servery, in fact, is as much of a feast for the eyes as its cuisine will be for the palate. Snazzy ceiling fixtures, shiny stainless steel and abundant glass provide a lively play of light. Even the shapes of the food stations are attractive, especially the circular brick oven. 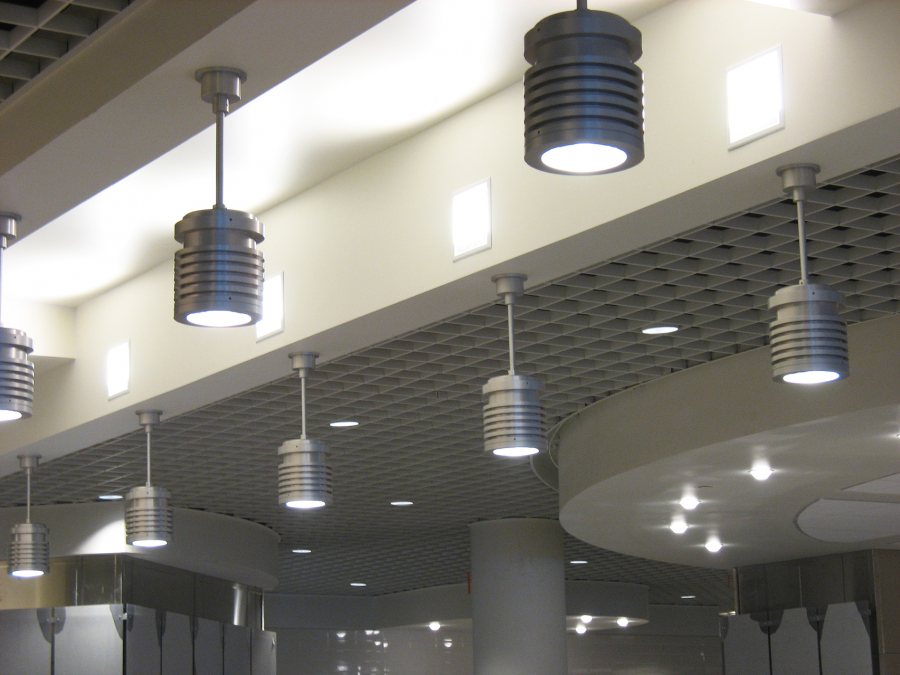 The serving stations are close to complete, with the millwork — cabinets, counters, knee walls, etc. — expected to be done this week. The pressure now is on the kitchen equipment installer, who is placing and connecting the myriad grills, broilers, ovens, burners, chillers and other gadgets that turn groceries into food.

Like much that happens in the construction biz, Farnsworth explained, that work rarely offers the gratification of orderly and straightforward progress. It’s not a march, it’s a dance: There are test-fittings, adjustments and delays if another trade needs to get at a location.

For example, Farnsworth pointed to a chrome pipe that supports a glass sneeze guard at the brick oven. The pipe attaches to a piece of wood inside a counter, close to an electrical junction box. So attaching that one piece involves the kitchen-equipment technician, carpenters and perhaps an electrician if the junction box is in the wrong place.

Meanwhile, the second story of the new dining Commons is essentially finished, aside from a lot of cleaning. The last big chore upstairs, Farnsworth reported, was the laying of carpet during the weekend of Jan. 12. 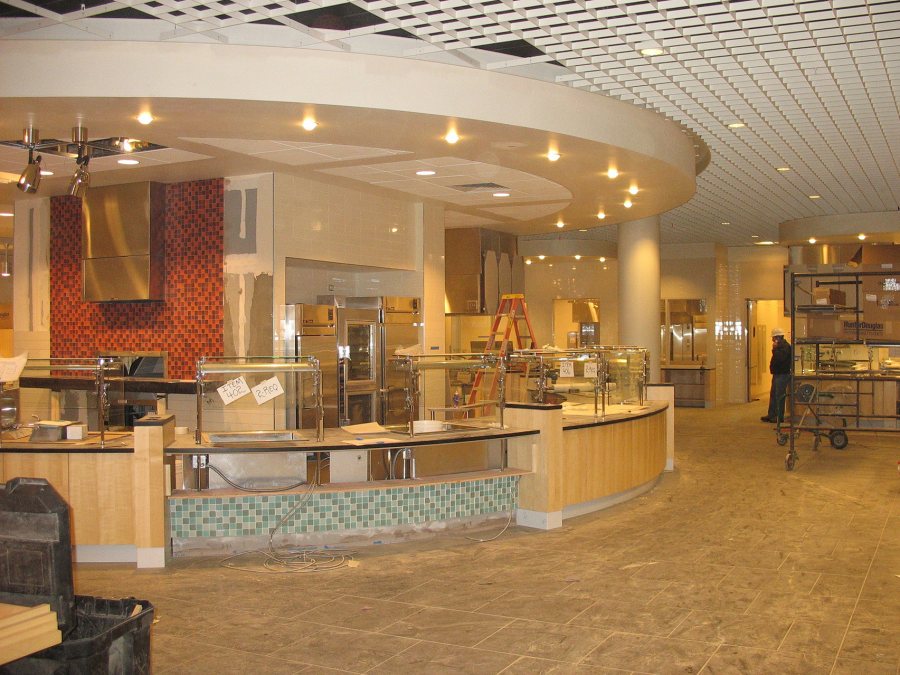 He noted that weekend work for the carpet installers, or any of the trades, is nothing unusual. Workers have been on the job six days a week since ground was broken in autumn 2006. The project has been on the fast track since it began, and a six-day work week also affords logistical flexibility. For instance, because covering a floor pretty much precludes any other work in a given space, the carpet crew has often gone in on Saturdays, when there are fewer other trades to conflict with.

That carpet, meanwhile, has a dynamic rectilinear pattern in dark-chocolate brown and a pale tan that echoes the ubiquitous maple. The same material will appear throughout the building, and in fact the carpet people were prepping the main dining hall when Campus Construction Update passed through on Jan. 18.

With that 5,900-square-foot floor cordoned off, bare of workers and equipment, it was the first time we were really able to grasp the luxury of space that diners will enjoy in the new Commons. Anticlaustrophobic indeed. 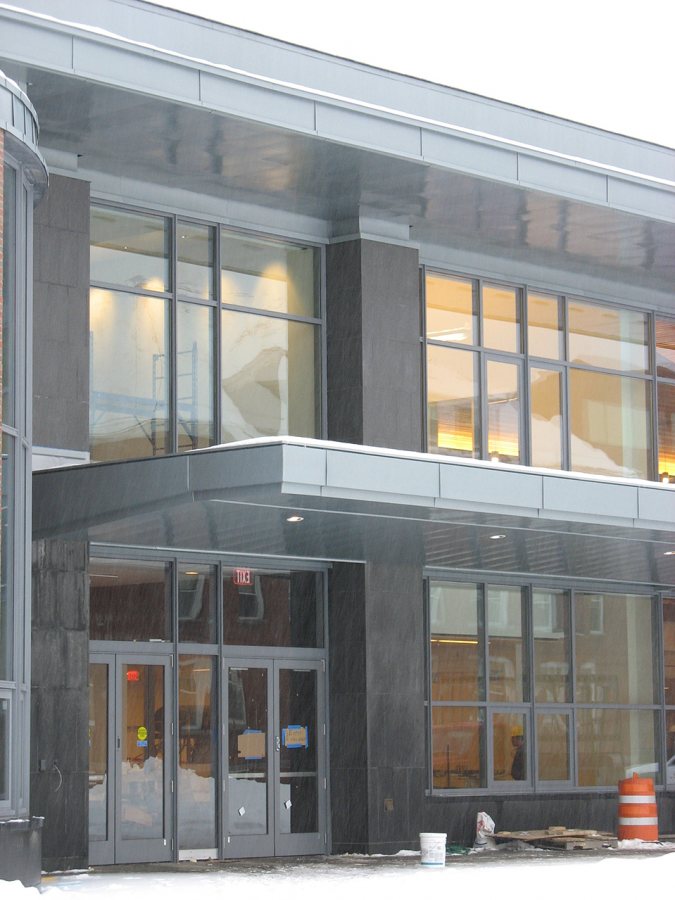 Another great leap forward in the second story was the removal of staging in the air-and-light shaft that reaches up to the ventilation monitor. That happened after workers hung the light fixtures and repainted the walls in a shade of green less violent than the previous choice.

Speaking of that monitor — and it may be the last time we do in this space — louvers were installed on its exterior during the second week of January. Also in the heavens, Farnsworth reported, roofers took advantage of warm weather that week to work on flashing and other finishing touches on the slate roof. And with the hanging of the main doors earlier in the month, major exterior work on the new Commons is done.

That same week, landscapers spread smooth blue-gray stones in the viewing garden next to the south-facing dining hall windows. 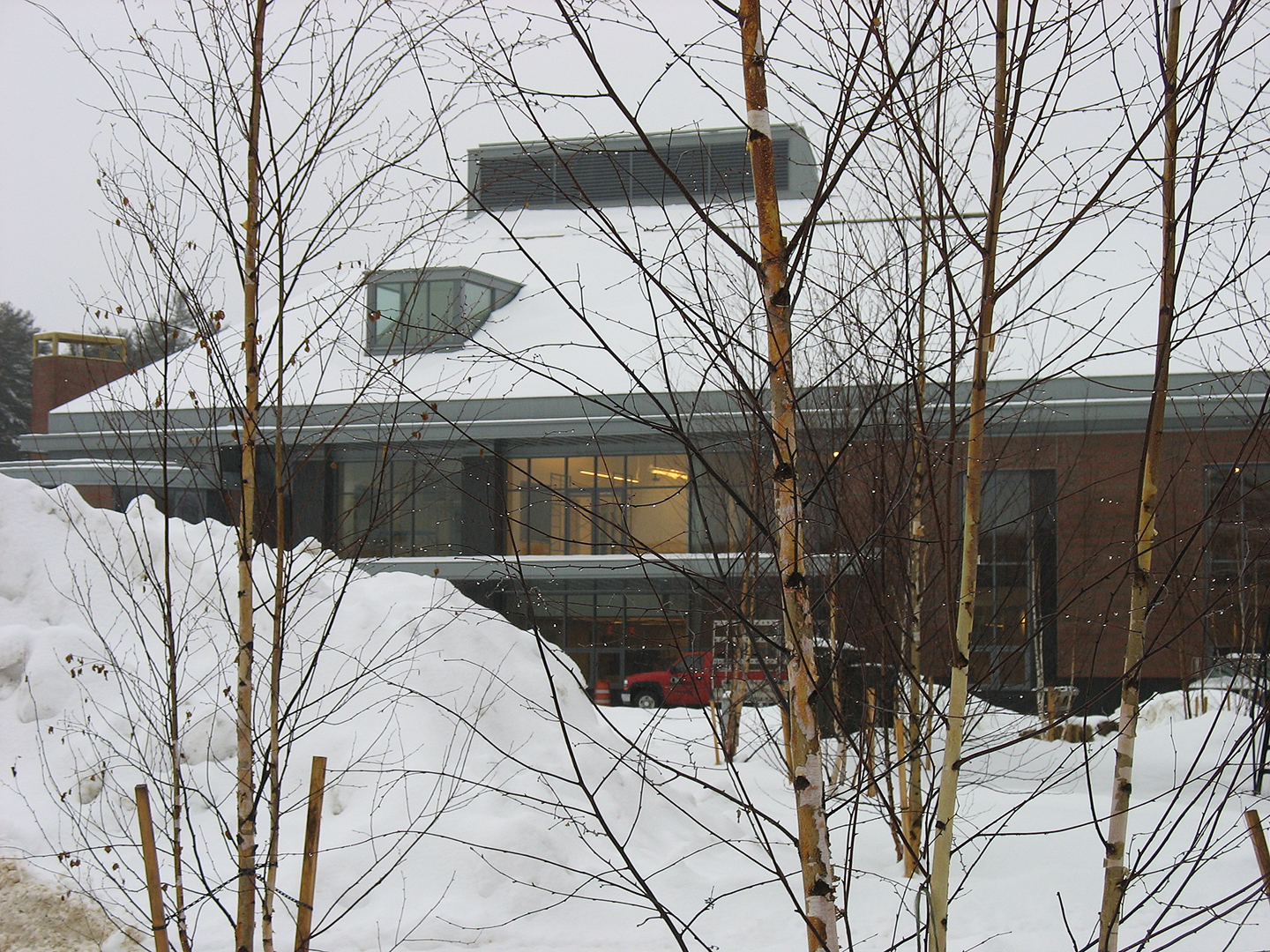 A view of the new Commons through Alumni Walk birches on a January day. (Doug Hubley/Bates College)

Finally, Farnsworth expects to pass another milestone on Jan. 23, when the city of Lewiston issues a certificate of occupancy. This culminates a series of safety-related inspections covering everything from the elevator to fire alarms to emergency egress issues.

The Den: We received additional information about plans for the Den when Memorial Commons goes dark in less than a month. The Den’s new hours will be 8 a.m. to 2 p.m., and it will be closed in the summer. 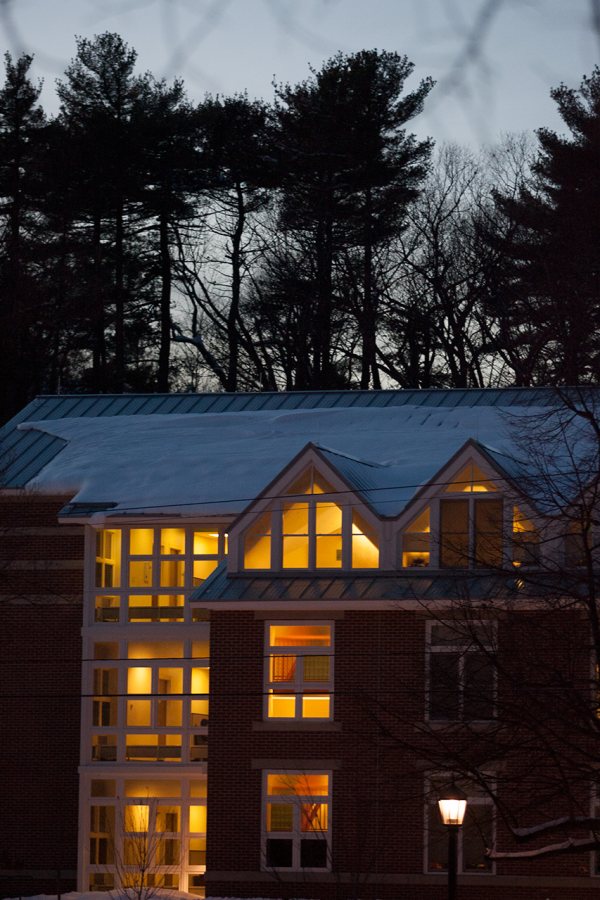 More imminently, Dining Services director Christine Schwartz announced that with old Commons closing, the Den will be used only for student dining during most of the winter recess, from Feb. 16 through 21. It’s expected that the new dining hall will serve its first meal to students Feb. 24, with a soft opening — aka “burn and learn,” in Schwartz’s words — during the days just prior.

Notes from underground: We haven’t talked about the steam heating system for a while, but one last chore was recently checked off that list. Now complete, the replacement of a connection between the steam plant and Merrill Gym was stalled some weeks ago when it was discovered that the existing steam lines were inaccessibly located beneath telecom conduits encased in concrete. Because the gym has its own boilers, it wasn’t a pressing task.

“It was easier just to find a different path for the steam, but that took several rounds of engineering because we didn’t want to reorder the piping,” which is custom-made, Farnsworth said. “We found a way around.”

Eventually those old telecom lines won’t be needed, Farnsworth noted. But they won’t be wasted. In 20 or 50 years their rediscovery will give Campus Construction Update fodder for a column. 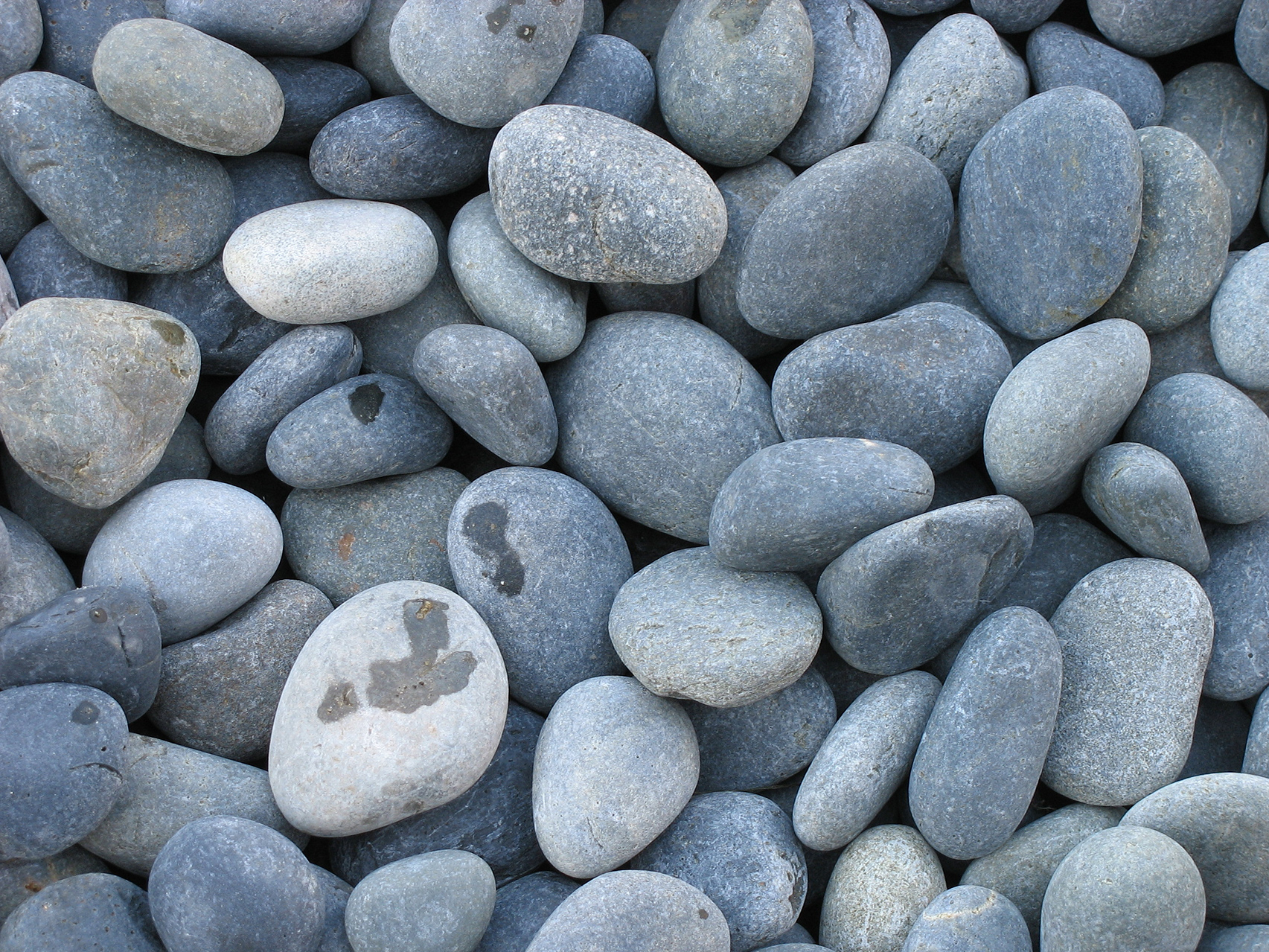