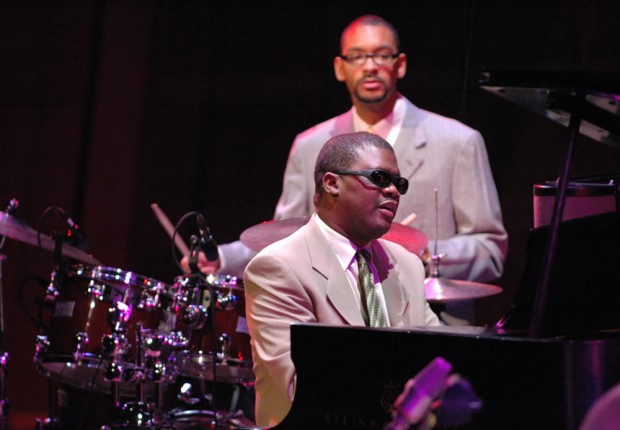 Described by jazz master Wynton Marsalis as “the genius of the modern piano,” Marcus Roberts and his combo return to Bates at 7 p.m. Sunday, Oct. 19.

Admission to the Roberts concert is $25, and to the Edwards-Campbell performance, $35. Tickets can be purchased at batestickets.com.

A critic for 77 Square called the Marcus Roberts Trio “as good and as devoted a straight-up bebop jazz trio as is working today.” Formed in 1995, the band is famed for virtuosity and a distinctive approach to the trio format that showcases each member’s artistry.

Roberts is presented in conjunction with the Bates College Museum of Art exhibition Convergence, which explores the intersections between jazz, visual art and film, with a focus on African American culture. 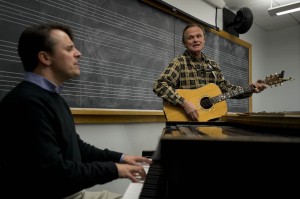 Known for the chart-topping singles “Sunshine” and “Shanty,” Edwards has been making honest and upbeat music for more than 45 years. He has explored country, bluegrass, rock, blues and folk. Tom Snow, pianist and director of the Bates Jazz Band, is a member of Edwards’ band.

Joining Edwards at Bates is a regional favorite, singer-songwriter Campbell. Based in both Maine and Nashville, Campbell explores contemporary folk, country and rock.

More about the Marcus Roberts Trio

The New York Times has described the music of the Marcus Roberts Trio as “generous in its warmth and strategic in its pacing, with a wealth of serendipitous detail.”

Last heard at Bates in 2007, Roberts is a pianist and composer who is equally accomplished in jazz and classical music. His deep respect for the contributions of the great musical masters has engendered his highly innovative and original approach to piano style and improvisation.

Roberts has recorded for BMG, Columbia and Sony Classical, and in 2009 launched his own label, J-Master Records. His catalog includes solo piano, duets and trio arrangements of jazz standards, original suites, large ensemble works and symphony orchestra recordings. His most recent recording project is with a new large ensemble, the Modern Jazz Generation, which has a debut CD slated for release this fall.

Pianists often dominate jazz trios, but the players in the Roberts trio — in addition to pianist Roberts, they are Jason Marsalis on drums and Rodney Jordan on bass — are equal partners.

The youngest son of pianist and music educator Ellis Marsalis, Jason began touring with Roberts in 1994 at age 17. A thoughtful and versatile musician, he has produced three albums as bandleader, including 2009’s Music Update, on which he plays the vibraphone. The Jason Marsalis Vibes Quartet performed at Bates in 2013.

Jordan joined the Marcus Roberts Trio in 2009. His classical training combined with a relentlessly swinging style makes him a perfect fit for the melodic, blues-based and syncopated improvisations of the Roberts Trio. Jordan is an associate professor of Jazz Studies at Florida State University in Tallahassee.

“An Edwards performance is an unforgettable roller-coaster ride which combines his remarkable singing, storytelling and wit,” wrote a reviewer for the Martha’s Vineyard Times.

Music City News praised Edwards’ throaty tenor as “one of the most distinctive voices on record,” distinguished by its “natural, unadulterated, undiluted quality.” 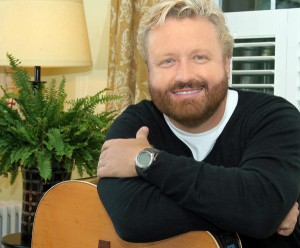 Since 1971, Edwards has released 15 albums, including Blue Ridge, his standard-setting collaboration with bluegrass favorites the Seldom Scene, and Little Hands, his collection of children’s songs, which was honored with a National Library Association award.

His most recent release is Jonathan Edwards Top 40, a two-disc, four-decade compilation of his most-requested performances, digitally remastered. His 2011 release My Love Will Keep, Edwards’ first studio album in 14 years, combined originals and covers in a co-production by Jonathan and Jim Begley.

In 2008, Media Artists released a 90-minute documentary of Edwards’ life and career titled That’s What Our Life Is.

Campbell has released 13 CDs, including his critically acclaimed tribute to Fogelberg, Kites to Fly, and this year’s The Dust Never Settles.