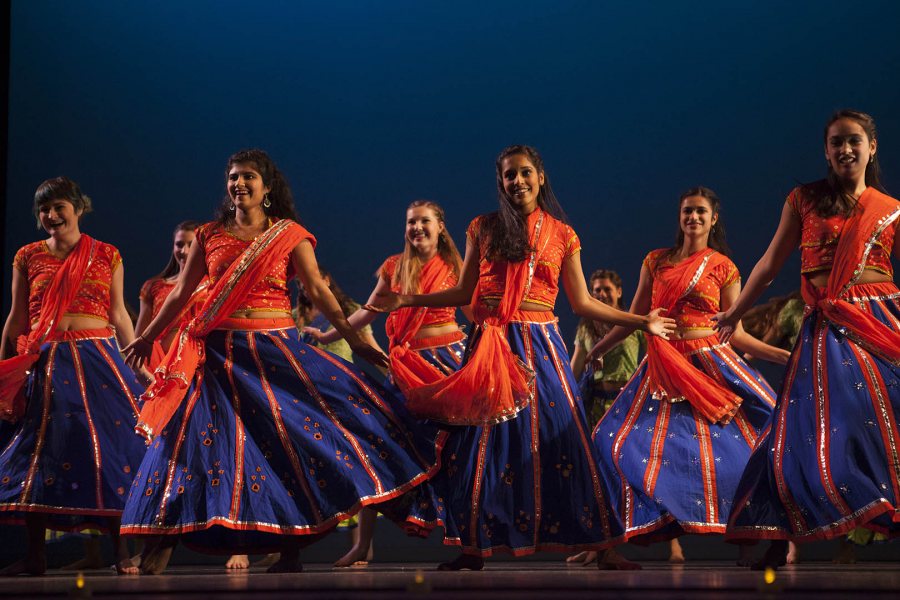 For the fifth year in a row, Bates College presents a dazzling double-header of student creativity in the arts.

A smorgasbord of performing, visual and literary arts, the Bates Arts Crawl begins at 4:30 p.m. Friday, Jan. 30, in locations around campus. The hotspots are the Olin Arts Center, 75 Russell St., presenting music and the visual arts; and Chase Hall, 56 Campus Ave., featuring various performing arts in Memorial Commons and literary readings in the Little Room.

Also in Chase, a children’s artmaking area will be set up in the lobby. Free refreshments will be offered at several locations. 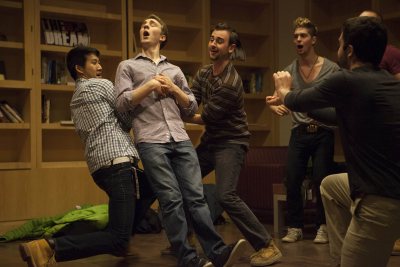 Members of the a cappella group the Manic Optimists cut up during their 2014 Arts Crawl performance.

Immediately following the Arts Crawl at 7:30 p.m. is Sangai Asia Night, a celebration of diverse Asian cultures through performance and traditional attire. The event is held in Schaeffer Theatre, 329 College St., and will be repeated at 7:30 p.m. Saturday. Doors open at 7 p.m. both nights.

While a visitor who wants to stay in one spot will enjoy the Arts Crawl, the event is designed for roaming, taking in a little of this and a little of that. “It’s a sort of tasting platter of the arts scene at Bates,” says Nick Auer, a senior from Fairfield, Connecticut, who is both performing in and helping organize the event.

Premiered in 2011 to highlight the capabilities of Bates students in the arts, the Arts Crawl is now a fixture. “Students have this on their radar,” says Carol Dilley, associate professor of dance and director of the dance program. “The Arts Crawl has settled in as something we do here.”

Though the Crawl and Sangai Asia Night programs are still in development, here’s an overview:

• In the Olin Arts Center, visual art majors will open their studios to display works in progress. In addition, the Bates College Museum of Art will be open: Now showing are Back and Forth: The Collaborative Works of Dawn Clements and Marc Leuthold and Photographs by Women: Recent Additions to the Permanent Collection. Jazz and other music will be performed in the Olin Concert Hall.

• In Chase Hall, student writers will read from their poetry and prose in the intimate Little Room, on the ground floor at the front of the building. Upstairs in the spacious Memorial Commons, two stages will support nonstop performances of dance, theater, improv comedy and music.

• More music will be provided by Bates’ popular a cappella groups in various locations.

Watch video from the 2013 Arts Crawl. Text continues below the video.

The Arts Crawl is produced by the Bates Arts Collaborative, consisting of faculty, staff and students involved in teaching and presenting the arts on campus. Three students are members: Linnea Brotz, a senior from Berkeley, California.; Lillie Shulman, a sophomore from Brooklyn, New York; and Erin Montanez, a junior from Fairfield, Connecticut.

And students have increasingly administered the event in recent years. The Bates Musicians’ Union, for instance, is coordinating the music in Memorial Commons. Three student bands are confirmed to play: “Sabattus,” “Good-Luck Gentleman” and “The Remedy.”

Pendergast and Auer are both officers in the Robinson Players, Bates’ longstanding student theater troupe. Along with helping to run the Crawl, they will perform together in it, previewing a piece that they’re developing in collaboration with the Bates Dance Club. They agree that the informality of the Arts Crawl affords a rare proximity to the raw creative process.

For the performers, “one of the big things is allowing people to see your work in progress,” says Pendergast. “To show something raw and fresh, and see how people react to it, is really useful for a performer.”

For audiences, “there’s an exciting energy to knowing that the creation is happening,” Auer says.

The Crawl, adds Pendergast, “is one of the few opportunities for all of these different arts groups to work together. You can have a Robinson Players piece followed by a dance piece, followed by improv, followed by a cappella. Simultaneously there’s visual art across campus.

“It’s one of the opportunities for people to experience them all at the same time, rather than going to one Rob Players production or one Bates Arts Society exhibit.”