Dissanayake ’09 to perform in May 14 gamelan, puppetry event 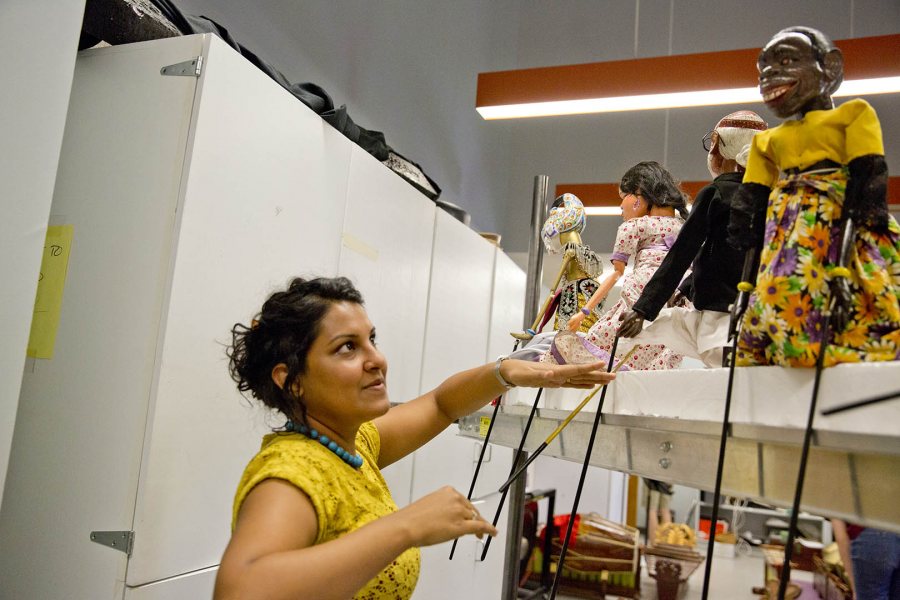 Back at Bates to work with a class in Indonesian performance, Sulochana Dissanayake ’09 works with rod puppets in Olin Arts Center during a rehearsal for a May 14 concert. (Phyllis Graber Jensen/Bates College)

“I learned the value of doing what you love for a living through the professionals I met at Bates – who were all 100 percent committed to their chosen path,” Sulochana Dissanayake ’09 told the seniors gathered for the annual honors banquet on May 6.

In a world crisscrossed with intriguing life paths, Dissanayake’s stands out. A double major in economics and theater at Bates, and a Watson Fellow after she graduated, her chosen path afterward ultimately led home to Sri Lanka.

There she launched Power of Play, a communication company dedicated to practicing performing arts with a special focus on puppetry and theater for education, awareness, reconciliation and development in Sri Lanka. 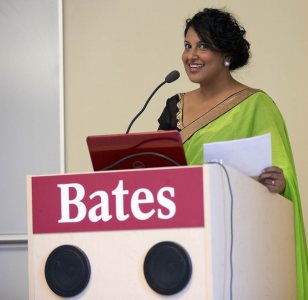 But this month her path has brought Dissanayake back to Bates, where she is collaborating with the Short Term gamelan ensemble and Indonesian guest artists on a performance of puppetry and music at 7:30 p.m. Thursday, May 14, in the Olin Arts Center Concert Hall, 75 Russell St.

Admission to the performance is free. The event is made possible in part by support from the Edith C. and Raymond A. Kendall ’19 Endowment Fund and a gift from Eijk and Rose-Marie van Otterloo. For more information, please call 207-786-6135.

Titled Stories From the Seven Seas, the program pulls together:

Gamelan is a traditional Indonesian musical form played on tuned percussion instruments. The term can refer to a given collection of instruments, which tend to be crafted in sets, as well as to the genre itself. Bates has two sets of gamelan instruments.

Visiting Bates from West Java are wayang puppeteer Kodrat Hidayah Taryana and Jaja Diatmaja, who instructs the 19-year-old Taryana at the Indonesian Institute of the Arts in Bandung, West Java. 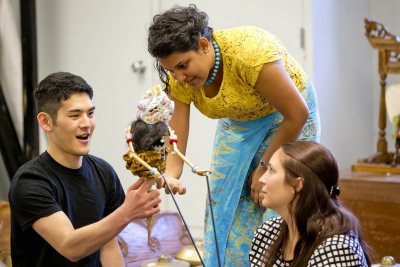 “Sulo is used to performing collaboratively, so Kodrat will perform with Sundanese puppets” — referring to a region in West Java — “alongside the Sri Lankan version of the wayang golek puppets that Sulo uses,” Fatone explains.

The program will include “The Power of People,” a puppet story that Dissanayake created collaboratively with students in the Performing Musical Art of Indonesia course. A classic tale of good vs. evil set in a fictional land facing the real perils of a modern country, “The Power of People” the story pits a fallen leader against a true savior who has rebelled against the regime.

“Finally, evil succumbs to good in an epic battle,” says Dissanayake, “which ends with the reminder that each human is a combination of good and evil — and true victory is achieving a sustainable balance.”

With the ultimate dream of founding a theater company and school to explore sociopolitical issues in her native Sri Lanka, Dissanayake visited Indonesia and South Africa to observe how people in these countries —former colonies with social, political and economic histories similar to Sri Lanka’s — use puppetry and nonverbal theater to explore socially critical issues, an approach not common in Sri Lanka. 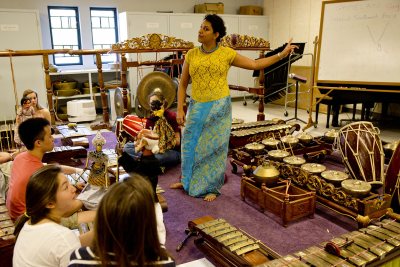 In Indonesia, Dissanayake studied wayang golek, in which wooden puppets are controlled by rods attached to the hands and a central rod attached to the body and head. There she worked with the most famous wayang golek dalang (master puppeteer), the recently deceased Pak Asep Sunandar Sunarya.

Dissanayake founded Power of Play upon returning to Sri Lanka after her Watson year. Power of Play seeks to use the puppetry and other arts not only to entertain, but also to promote communication and break social, political and economic barriers in Sri Lanka.

“You can’t get angry at a puppet,” Dissanayake said in an interview with the magazine Lanka Woman. “A completely genuine channel of communication is created between puppet and audience.”

The shadow puppets to be used in the performance are part of a collection of more than 300 on permanent loan to Bates College. David Eisler, an attorney in New Hampshire, has loaned the collection to Bates to honor the memory of his father, Dr. Milton Eisler, and to ensure that the collection remains intact.