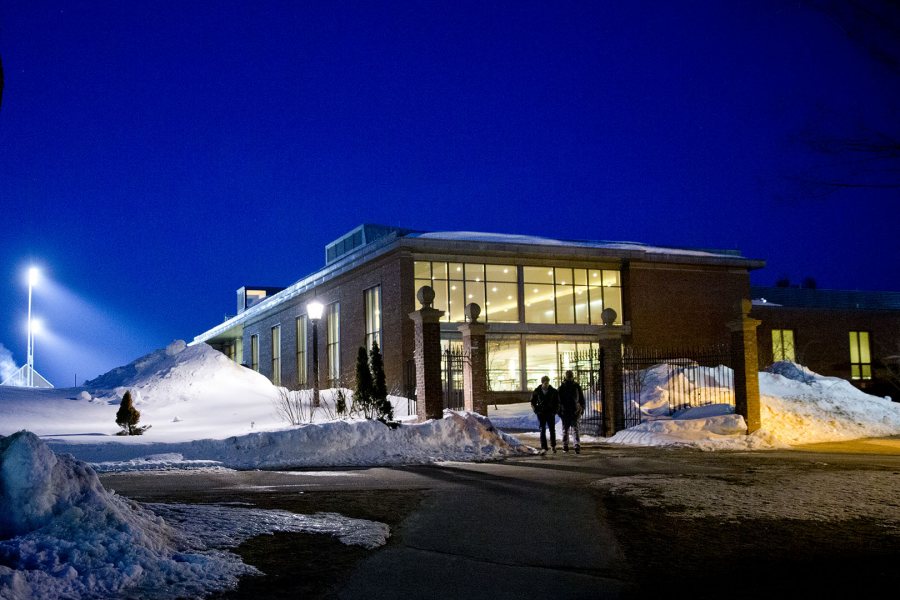 The Garcelon Field lights illuminate Commons on a March night. Inside is the traditional and restorative “home base” where students can gather and reconnect during mealtime. (Phyllis Graber Jensen/Bates College)

In the mid-2000s, as Bates worked with architect Sasaki Associates on plans for a new dining facility, it was up for grabs whether Bates would continue with its distinctive tradition of a single dining hall where everyone dines under one roof.

But during their campus interviews, the architects heard a common response from students, faculty, and staff.

A version of this story appeared in the Fall 2015 issue of Bates Magazine.

“Maybe because our students are so busy, it felt even more important for them to have a home base where they can come together and reconnect over meals.”

Bates didn’t always have a single dining hall. The college once had two, one for men and one for women, until 1967, when dining became coed with the closing of the women’s dining hall in Rand Hall.

From then until 2008, Bates’ single dining hall was Memorial Commons, in Chase Hall.

“Not a hip, swinging building, but it is great complement to the Bates campus.”

In February 2008, the new Commons building opened. Located between Garcelon Field and Alumni Gym, at the terminus of Alumni Walk, the 60,000 square-foot structure is clad in brick, granite, slate, copper, and ample glass.

In the collegiate gothic style, “it is not a hip, swinging building, but it is great complement to the Bates campus, and it has enormous architectural integrity,” said the late architectural critic and author Philip Isaacson ’47.

Showcased as case study in sustainability.

Long a leader in sustainable dining, in 2013 Bates Dining earned a third star for sustainability from the Green Restaurant Association, joining just a handful of U.S. colleges or universities with the rating.

Earlier this year, the nonprofit Farm to Institution New England showcased Bates as a case study in sustainability.

It’s also distinctive that Bates runs its own dining operation rather than outsourcing to a commercial food service. With some 90 employees, Dining Services serves more than 4,800 meals every day of the academic year to 1,700 students. 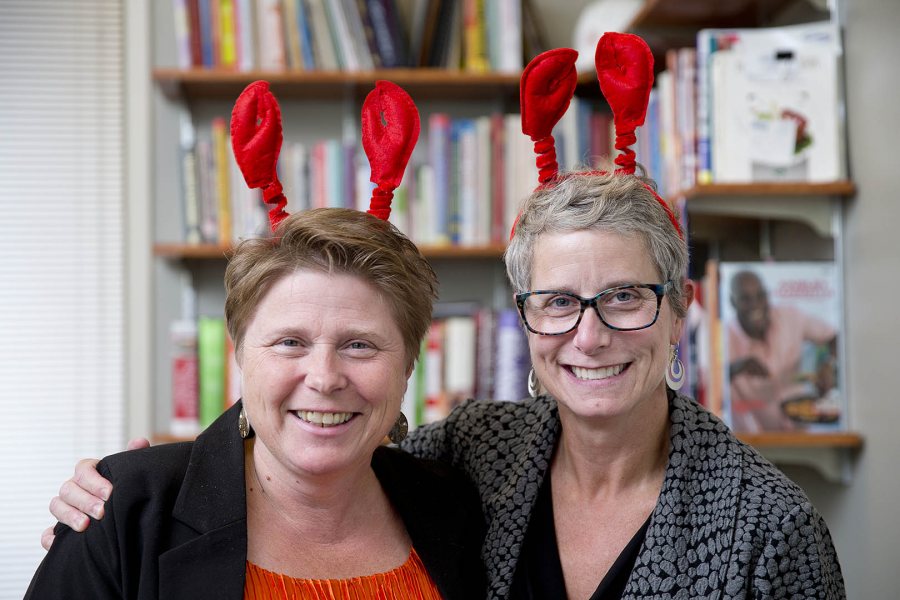 Cheryl Lacey (left) and Christine Schwartz aren’t above adding some levity (and lobster claw boppers) in the service of the Bates dining experience. Lacey is director of Dining Services, and Schwartz is assistant vice president for dining, conferences, and campus events. (Phyllis Graber Jensen/Bates College)

As they’ve turned a building into a community-builder, Schwartz and Director of Dining Cheryl Lacey recently talked about both the simple lessons they’ve learned (such as “never install any shelving that’s higher than your shortest employee!”) and the big ones.

As Bates planned its new Commons, Schwartz used the impending change as a catalyst for professional development among her staff.

“The profile of our work was going to be very different in a new building,” she says. “So we invited the staff to tell us if they wanted to do something different. If it was possible, we’d help them make the move.'”

The plan paid off in staff satisfaction. Longtime servers moved into the kitchen, dishroom workers moved to the bakery, and so on.

“In some cases, this was the first time in their lives that someone asked them, ‘What do you want to do?’” says Schwartz. 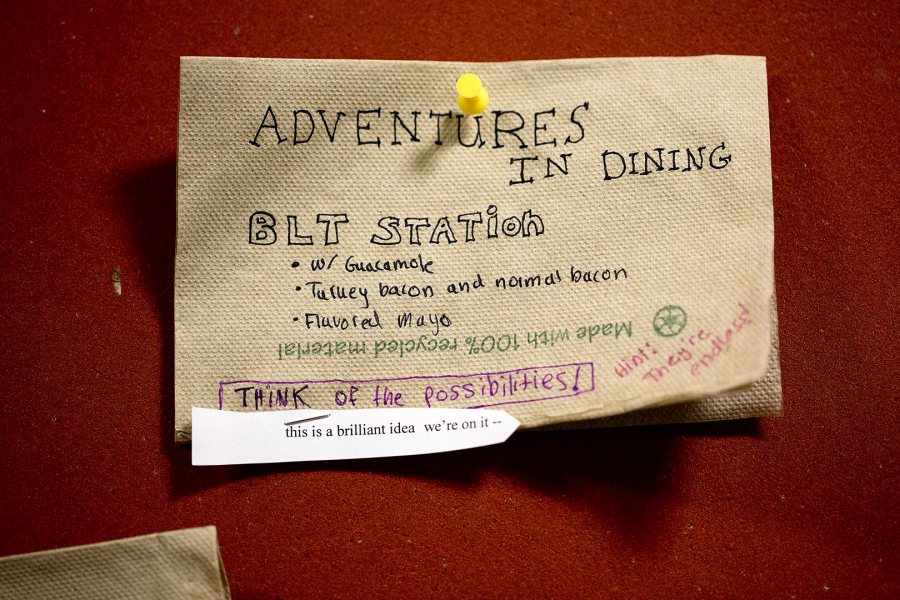 The Napkin Board lets Bates students comment, criticize, request, and praise. This napkin’s request for a BLT station gets a hopeful response. (Phyllis Graber Jensen/Bates College)

To keep tabs on changing student tastes, Lacey and Schwartz use the venerable Napkin Board, a wall in Commons where students pose questions or make comments on a napkin, and an anonymous student working for Dining Services writes replies on the napkin. (There’s an online version, too.)

And students, surprisingly, “seem to be connoisseurs of fake maple syrup,” Lacey says.

“Some requests are important today and gone tomorrow,” she says. “But some persist, like the latest fad: Reddi-wip.” Cereal tastes change, too. Lacey just finished a survey that shows a new favorite, Fruit and Yogurt Special K. 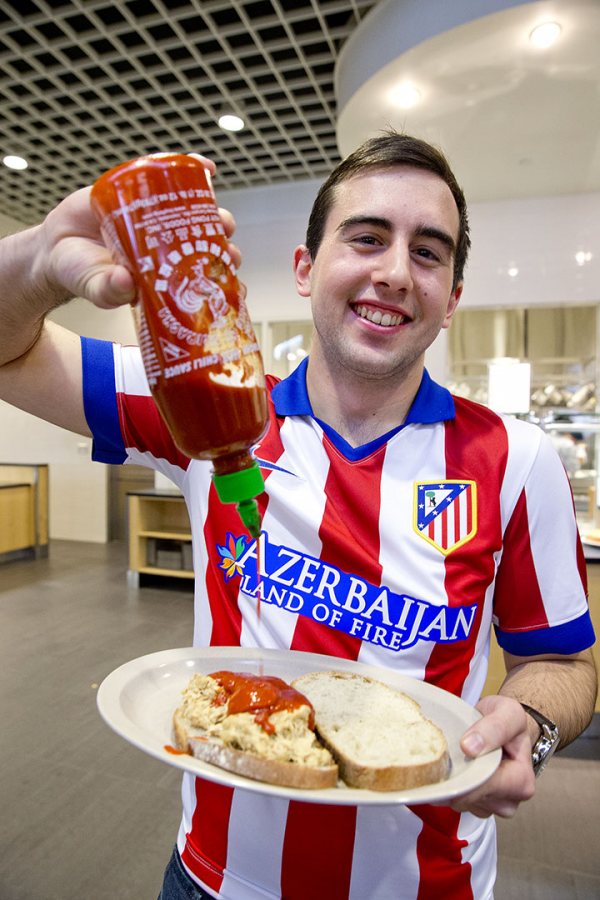 The servery features a marketplace model, where students take their food from one of several platforms — the Round, with a deli, brick oven, and salad and pasta bars; the Bobcat Bar, featuring a range of hot dishes, including the famous shepherd’s pie; plus the Bakery, Grill, and Choices, for alternatives such as gluten-free foods.

“We wanted versatility, and that has paid off.”

The Bates team resisted the temptation to define the platforms by menu item. “We didn’t name a ‘taco station,’ for example,” Schwartz says. “We wanted versatility, and that has paid off.”

The flow of diners to and from the platforms is fluid, easily handling 500 students in a 30- to 45-minute period. “Combine that with open seating areas on two levels, and you have a very appealing dining environment,” Schwartz says.

Commons is a place to feed intellectual curiosity as well as the body, and Bates Dining gets valuable help from students and faculty who wish to conduct dining- or food-focused projects.

“We live for this sort of thing because it allows us all to be part of a larger Bates experience,” Schwartz says.

A recent senior’s thesis compared traditional food thermometers to a newer style, specifically looking at their self-sanitizing capacity to prevent bacterial and allergen cross-contamination. “We found out that the traditional, and much cheaper, style is more effective at preventing cross contamination,” Lacey says.

The old Bates dining operation in Chase Hall was cramped and outdated, and the chefs did their work far away from — and two floor levels below — students.

Now, chefs work at platforms out front. Speaking literally and figuratively, first cook Roland Theriault notes that “we’re on the same floor as everybody else.” 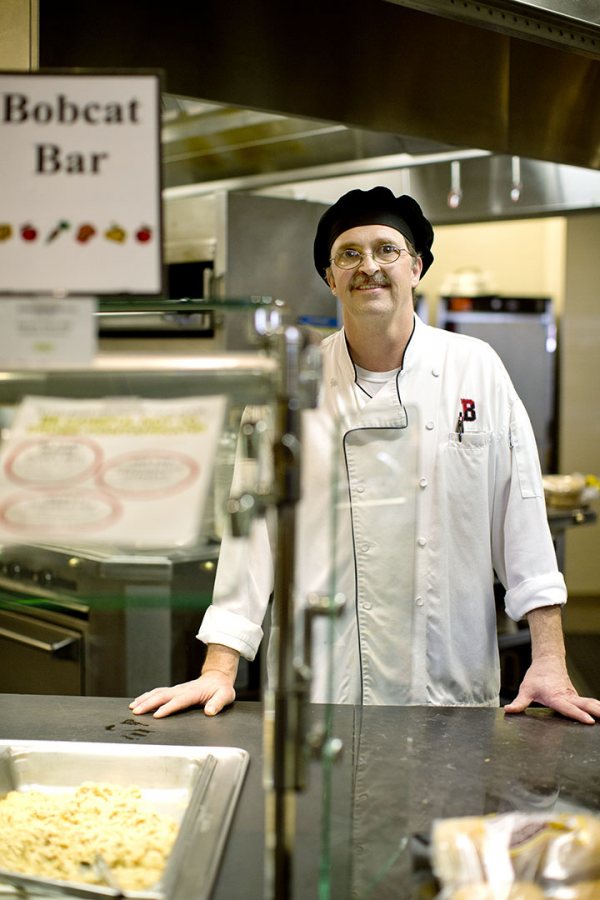 For first cook Roland Theriault, moving from the old kitchen in Chase Hall’s basement to Commons means that “we’re on the same floor as everybody else” — literally and figuratively. (Phyllis Graber Jensen/Bates College)

Theriault spent his first 19 years at Bates working in the basement of Memorial Commons. Now, at the Bobcat Bar, he gets a chance to talk with his diners.

“Sometimes students just need an adult they can vent to.”

For students increasingly curious about their food, this has been a boon for Bates, and for the Dining Services chefs. It’s more than just a service relationship where students grill chefs on what’s in the sauce.

“It goes beyond that,” says Schwartz. “They can talk about home, studies, life, and what’s happening in their lives. Sometimes students just need an adult they can vent to.”

Even before Bluto piled his tray high with foodstuffs in Animal House, the tray has been a symbol of the college dining experience.

But trays are on their way out. As Bates students take more ownership of their dining experience, they treat each serving like a course in a restaurant. 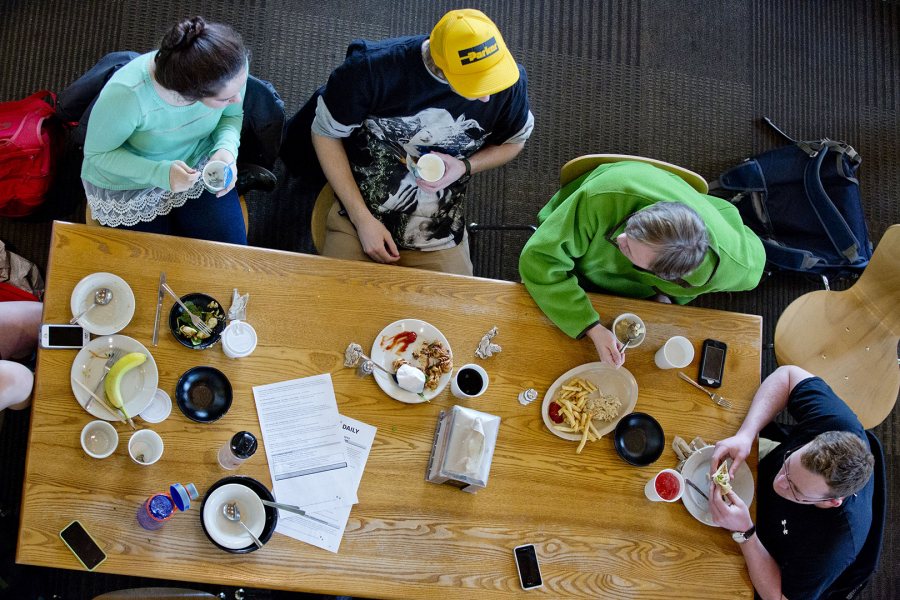 The only thing missing from this iconic Commons lunch scene are trays. They’re on the outs. (Phyllis Graber Jensen/Bates College)

“And that’s what we want,” Schwartz says. “We don’t want you to fill a tray so half the food gets cold while you eat the other half.”

New students still grab a tray and load up, but older students know better, Lacey says. “When you’ve been here awhile, you realize you don’t need to — you don’t want to!”

7. The Menu Is Just a Starting Point

Bates students are savvy about what they want to create by mixing and matching items from several platforms. The most popular foundations are pita pockets, bagels, tortillas, and wraps.

What emerges can be anything from bruschetta to a strawberry tart, or almost anything with pesto on it.

“They feel comfortable enough to say, ‘We own this.’”

“They are invested in their food. They are always thinking about it,” Schwartz says. “And they don’t want a cafeteria experience. They want a dining experience.”

That takes creativity, she adds. “I equate it with being in your own kitchen. They feel comfortable enough to say, ‘We own this.’ And that’s wicked cool.”

Multimedia: Check out the Class of 2019’s Opening Day from morning to night 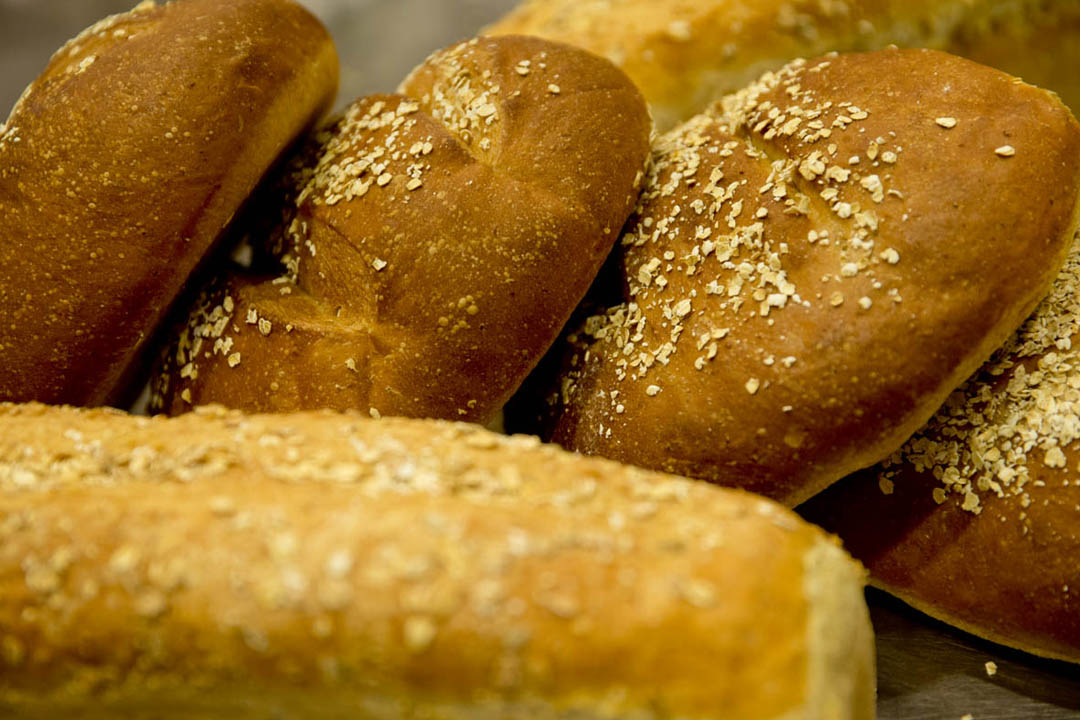