How many little kids can Bates entertain and educate in one night? That was the question on April 3 as Bates astronomy students presented their “Astronomy Extravaganza” for local schoolchildren.

By evening’s end, the answer was evident: nearly 250 children from Lewiston and Auburn elementary and middle schools had enjoyed offerings that ranged from hands-on activities with telescopes and moon phases to interactive planetarium shows about the stars’ movement in our night sky. 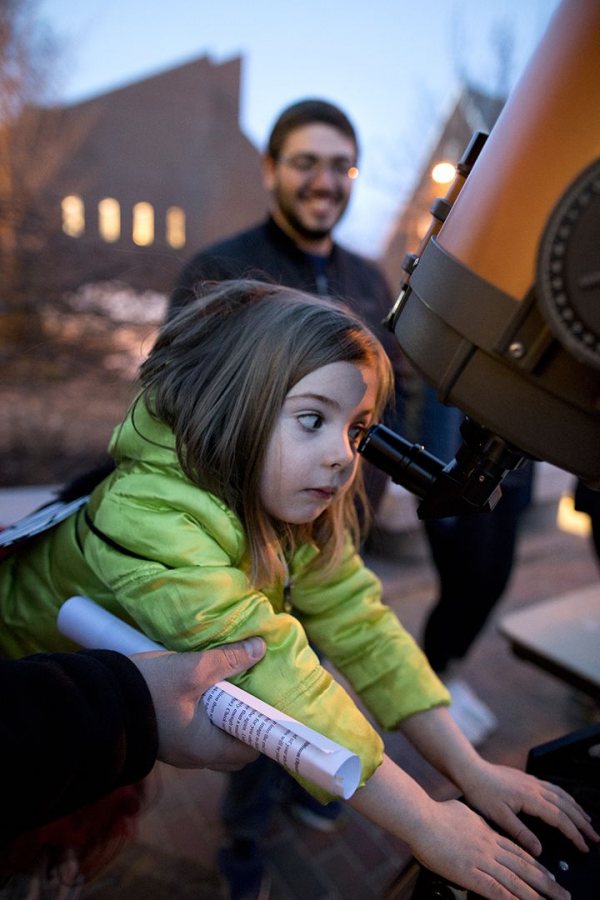 Isla Shea, 6, of East Auburn School, uses a telescope to view the moon as Evan Goldberg ’19 looks on during the Astronomy Extravaganza on April 3. (Phyllis Graber Jensen/Bates College)

Bella, a first-grader from Martel Elementary in Lewiston, loved a constellation game presented in Carnegie Science Hall because she was able to figure out which groups of stars she could see on her birthday.

“I have never thought about the stars before,” Bella said. “I loved being able to have fun and learn about them at the same time!”

Alexia, a second-grader from Farwell Elementary in Lewiston, was jumping with excitement before walking into a planetarium show. “Wow! I love science!”

The event was the brainchild of Assistant Professor of Physics Aleks Diamond-Stanic, who teamed up with one of the department’s assistants in instruction, Nicole Hastings, and with Ellen Alcorn and Brenna Callahan of the Harward Center for Community Partnerships.

The event featured projects, posters, and demonstrations inside Carnegie and Chase Hall, as well as outside between the two buildings, and everything staffed by students in Diamond-Stanic’s course “Introduction to Astronomy.”

The program was inspired by similar experiences that Diamond-Stanic, new to Bates this year, had with middle-school students during his graduate studies at the University of Arizona. “I find it rewarding to see children engage in the process of discovery,” he said, “and I feel compelled to find ways to encourage their scientific interest, capacity, and identity.”

At the same time, he wanted a venue for his own Bates students to “share their new knowledge of astronomy with grade-school students.”

Diamond-Stanic’s three children — ages 8, 4, 1 — attended the extravaganza. The older two are in Lewiston public schools, and it was great, he said, to “see Bates students actively facilitating the process of learning and discovery for so many young children, including my own.” 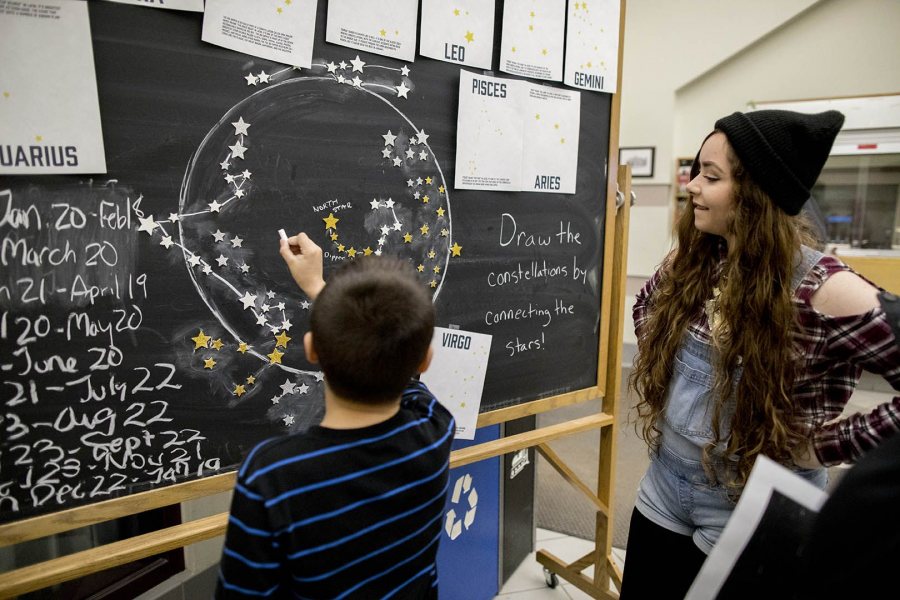 A boy engages with the Connect the Constellations display as Emily Morse ’17 of Machias, Maine, watches in the Carnegie Science Hall lobby. (Phyllis Graber Jensen/Bates College)

Happiness ruled the evening, paving the way for future events, he said.

“Connections between what we are doing in our department and what is being done in the Harward Center are useful and gratifying. I want to continue to focus on sparking interest in students and increasing their capacity to do whatever it is that they want to do.”