The 2016–17 school year was perhaps the greatest in recent history for Bates athletics. One can measure the success via numbers, such as a school-record 20th-place finish in the Directors’ Cup.

Or one can measure the success in the moments we will remember for years to come. With that in mind, we’ve compiled the top seven sports moments of the 2016–17 Bates school year. Feel free to add to the list in the comments section.

7. Oct. 8, 2016: Frank Williams leads Bates football to yet another win over Williams

For the fifth time in the last six years, the Bobcats defeated the Ephs on the gridiron. But this year was extra special thanks to Frank Williams ‘18.

The slotback from Brookline, Mass. caught nine passes for 223 yards and three touchdowns, all career-highs, to lead Bates to a 29–17 victory on Back to Bates weekend. His explosive performance included touchdown catches of 63 and 73 yards.

“I’ve never had a game like that receiving-wise in my life,” Williams said after it was all over. “They didn’t cover me for some reason and I just caught the ball and ran.”

A crowd of 3,211 fans cheered the Bobcats to victory.

“We’re used to good crowds, but I don’t think I’ve ever seen it like that before,” Williams said. “There was a lot of people there, it was great.”

Williams earned NESCAC Offensive Player of the Week honors and flirted with Bates’ single-game receiving yards record of 257 set by Chris Plante ’94 against Trinity in 1991.

The Bates Bobcast had the game covered from all angles following the win, including an interview with Williams at the 16:10 mark.

Skiing competitively on her home course of Black Mountain for the final time, Sadie James ’17 of Avon, Maine, made the most of her opportunity. 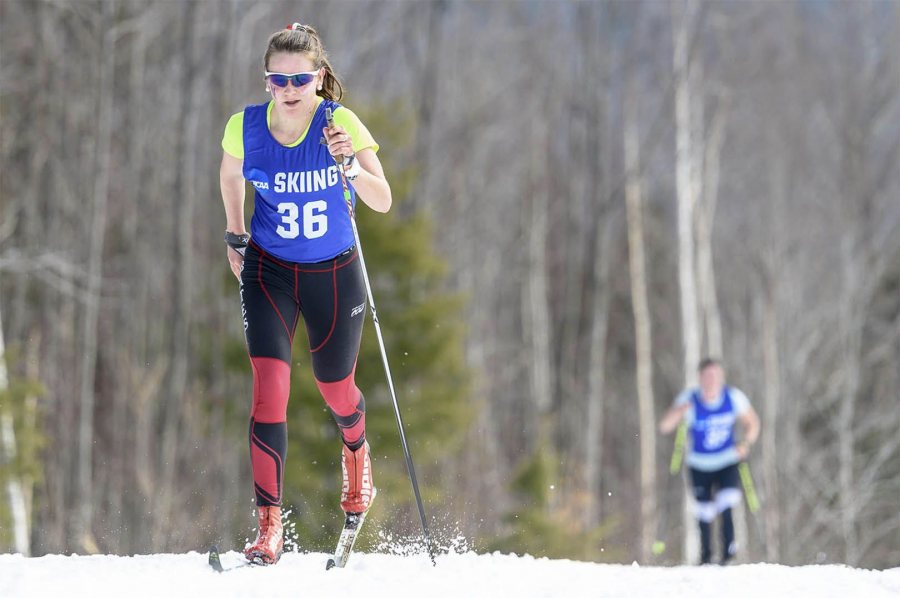 She became the first Bates women’s Nordic skier since 2003 to win an Eastern Intercollegiate Ski Association carnival race, and the Bobcat Nordic ski teams combined to take home the coveted Chummy Broomhall Cup at the Bates Carnival. The award goes to Maine’s top collegiate Nordic team, based on the combined men’s and women’s scores in the classical technique races.

The 5-kilometer classical technique race was an individual start, so James didn’t know she’d won until after everyone finished.

“I had coaches, teammates, and spectators telling me I was having a great race, but I didn’t know what that meant,” James said. “I was hoping that meant a top five! I got my first split at about 4.5 kilometers, climbing High School Hill. At the finish, I heard them say I broke into the lead and I’m pretty sure I said something along the lines of, ‘Wait, what?'”

The victory qualified James for the NCAA Championships for the second consecutive year.

She talked more about her carnival win at the 11:16 mark on the Bates Bobcast.

Sara Daher ’17 of Marblehead, Mass., has been a near-revolutionary force for the women’s swimming program from the moment she arrived on campus. She entered the 2016–17 school year as the most decorated athlete in Bates athletics history, thanks to a remarkable 17 All-America awards.

“The biggest impact she has made is the effect she’s had on all her teammates,” head coach Peter Casares said. “She is fantastic at leading lanes, at doing things right, and inspiring others.”

At the 2017 NCAA Championships, Daher earned six more All-America awards to finish her career with 23.

“One of the things I’ve learned since my first year here is that you swim best when you’re having fun,” Daher said. “Having my teammates enjoy the atmosphere and the moment is very important.”

Her leadership style is clearly working. In 2017, the Bates women’s team finished the four-day NCAA Championships in 13th place out of 51 scoring teams, their fourth straight top-17 national finish.

The basketball seasons proved to be very entertaining this school year thanks to some spectacular seniors.

Malcolm Delpeche ’17 of Wilmington, Del., became Bates’ all-time leading shot blocker on Dec. 10, 2016, in a non-conference game against Colby College. He earned NESCAC Defensive Player of the Year honors and finished his career with 178 blocked shots.

“I definitely wanted to get that record at home,” Malcolm Delpeche said. “It is very exciting to be part of Bates history.”

Not to be outdone, twin brother Marcus Delpeche was a first team All-NESCAC selection and led the Bobcats to a huge 84-72 victory over then-No. 4 nationally ranked Tufts on Jan. 28, 2017.

Marcus Delpeche finished his career with 1,025 points, scoring point No. 1,000 on the final day of the regular season.

“These milestones are something I’ve anticipated over the course of their four years here, and it’s really cool to see it happen,” head coach Jon Furbush ’05 said. “It was great to see Marcus get his 1,000th point in our gym in front of our crowd and obviously what Malcolm’s done in his career on defense has been incredible.”

Malcolm and Marcus Delpeche’s accomplishments were not limited to the court. Off the court, they proved to be leaders in efforts to keep the Bates community a safe place for all.

But perhaps her best performance of the season came earlier in January, in a 64-57 win over Colby to begin NESCAC play. Coppola tallied at that point a career-high 24 points while adding 16 rebounds. She took the game over down the stretch.

“I wasn’t really thinking at all in the fourth quarter,” Coppola said. “We were just so focused on winning that game since we’d lost to Colby earlier in the season.

“I think some of those shots that went in were helped by ‘Alumni Magic,'” she added, referring to the Bobcats’ home court of Alumni Gym.

Coppola finished her senior season as a second team All-NESCAC selection and was one of 38 Bates graduates to receive the Senior Scholar Award from the Department of Athletics.

When Allison Hill ’17 of Brunswick, Maine, hit a hurdle and failed to qualify for the 60-meter hurdle finals at the NCAA Indoor Track and Field Championships in March, it could have spelled disaster.

Instead, it turned into the comeback story of the year. 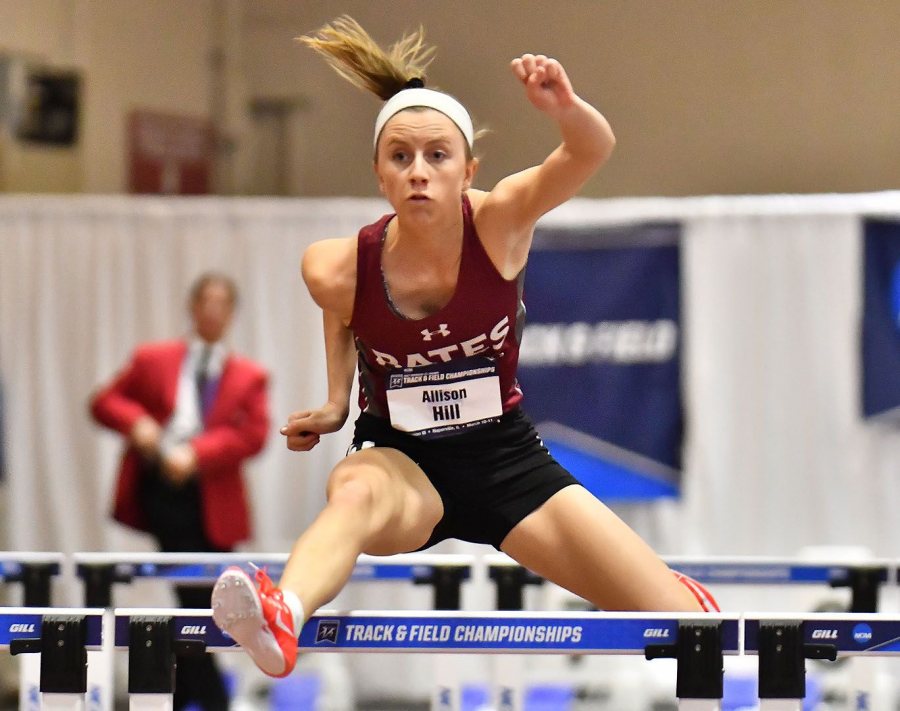 In her 60-meter hurdle preliminary race at the NCAA Indoor Track and Field Championships on March 10, Allison Hill ’17 clears the second hurdle before finding trouble at the third. (Photograph by d3photography.com)

The Bobcats finished the two-day event with 15 points and a tie for 11th place out of 70 scoring teams and 112 participating schools. Their four All-American finishes surpass the three they earned at the 2004 NCAA Indoor Championships, when the team finished third overall. The team’s 11th-place finish is their best since 2006.

Hill became the first Bates women’s track & field athlete to win All-American honors in the 200-meter dash. She broke her own flat-track Bates record with a time of 25.22 seconds, good for a fifth-place finish and her first indoor All-American award.

“I realized it was my last indoor race ever so I tried to put everything I had into it,” Hill said. “I am really proud of everyone’s performances this weekend, it was amazing.”

The Bates Bobcast captured the upbeat vibe of the track teams’ trek to the American heartland:

2. Senior Charlie Fay and men’s lacrosse enjoy a season for the ages

After barely missing out on the NCAA tournament in 2016, the Bates men’s lacrosse team left no doubt in 2017. The Bobcats won their first 14 games and surged as high as No. 1 in the national rankings.

First team All-American and NESCAC Player of the Year Charlie Fay ’17 of Falmouth, Maine, exploded for a team-record 79 goals, finishing his career with 167, second most in Bobcat history.

Fay is laid back off the field, but as intense as they come on the field.

“I hate to lose, so I am going to do everything I can not to lose,” Fay said, reflecting on his hyper-competitive nature. “I don’t like that feeling of losing and I don’t want it ever again.”

All-America Honorable Mentions Andrew Melvin ’17 of Medfield, Mass., and Matt Chlastawa ’20 of Westfield, Mass., joined Fay on attack to form the “two-and-a-half men,” a sly reference to Chlastawa’s listed height of 5-foot-6. The two-and-a-half men propelled the Bobcats to perhaps their signature win of the year, a 19–18 victory at then–No. 3 nationally ranked Tufts on April 18.

Bates advanced to the NCAA tournament quarterfinals before falling to Wesleyan by just one goal. The Bobcats finished the year with a program-best record of 16-2. Following the season, Fay was selected in the Major League Lacrosse draft by the Boston Cannons.

Once upon a time, the Bates women’s rowing team routinely finished second to Williams at the NCAA regatta — five straight times, in fact.

Those days seem to be well in the past.

In 2017, Bates won its second NCAA championship in three years thanks in part to a fourth consecutive gold medal for the second varsity eight, a scrappy bunch led the past three years by coxswain Abbey Bierman ’17 of Bethlehem, N.Y.

“We’re watching, we’re watching, Wellesley puts up this fight in the last 500 that almost gets them, they [Bates] put up an even bigger fight,” Bierman said. “My bow seat Alex Salazar turns around and is like, ‘I can’t watch any more!’ They finish and we whip our heads around to the coaching staff, and ask, ‘Did we?’ and they nod — we did!”

“This is so much more than a victory for those of us who got to be on the water today,” Molly Pritz ’17 of Ithaca, N.Y., said. “This is for everyone. I was happiest to see my first coxswain at Bates [Molly Huffaker ’14] who was here. This is the second [team] national championship for the school and we own both of them. So that’s awesome.”