Looming large in the facility improvements of summer 2017 is a wave of classroom renovation and office creation across campus.

Much of the work is driven by material considerations, such as a need for more office space.

But two classrooms in Carnegie Science Hall are being made over for a purely academic reason: Bates’ interest in exploring classroom environments that support so-called active learning. Carnegie 225 and 339 are being used to pilot ideas that might inform the design of the college’s new STEM facility a few years hence, not to mention renovation of existing spaces.

Active learning is an approach to pedagogy that encourages students to participate, er, actively in the acquisition of knowledge, rather than passively absorbing facts from a lecturer — the “sage on the stage.” 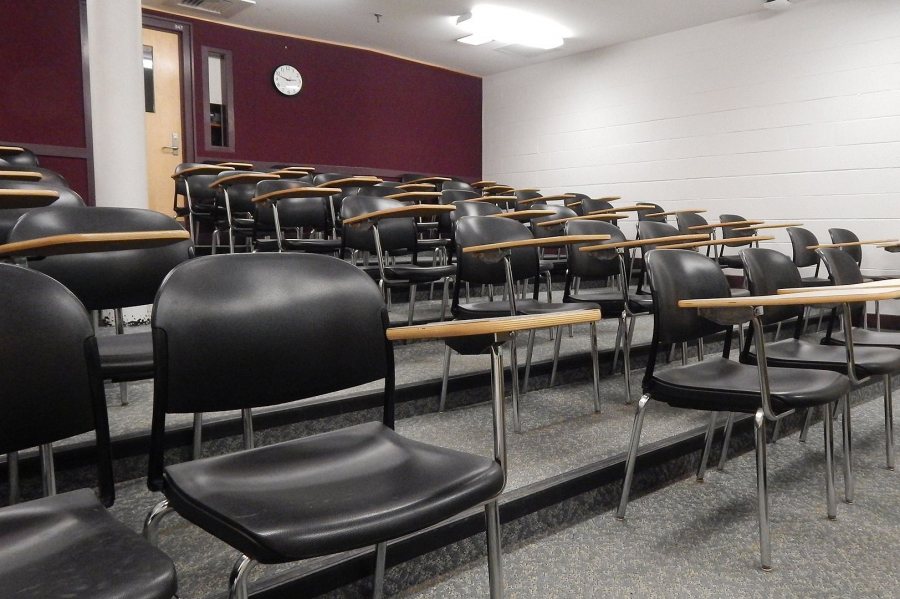 The tiered floor, the projection booth at left, and the white wall enclosing a storeroom will be removed in a renovation of Carnegie 339. (Doug Hubley/Bates College)

Active-learning tactics can be as minimal as questioning students during a lecture and as complex as assigning hands-on projects or role-playing exercises. “It’s a continuum, like many things,” says Lynn Mandeltort, a visiting assistant professor of chemistry with a particular expertise in active learning. (Her methods include asking students to build models of crystalline structures from gumdrops and toothpicks.)

The most extensive makeover is in Carnegie 339, a medium-sized lecture hall. Structural changes are forthcoming (described below), but the updates most relevant to active learning involve furniture and communications technology — high and low.

Previously equipped with 53 plain old tablet-arm desks, the reborn Room 339 will seat 36 at new dual-mode tables: Each table consists of two trapezoidal halves that can be used separately or latched together into a hexagon. 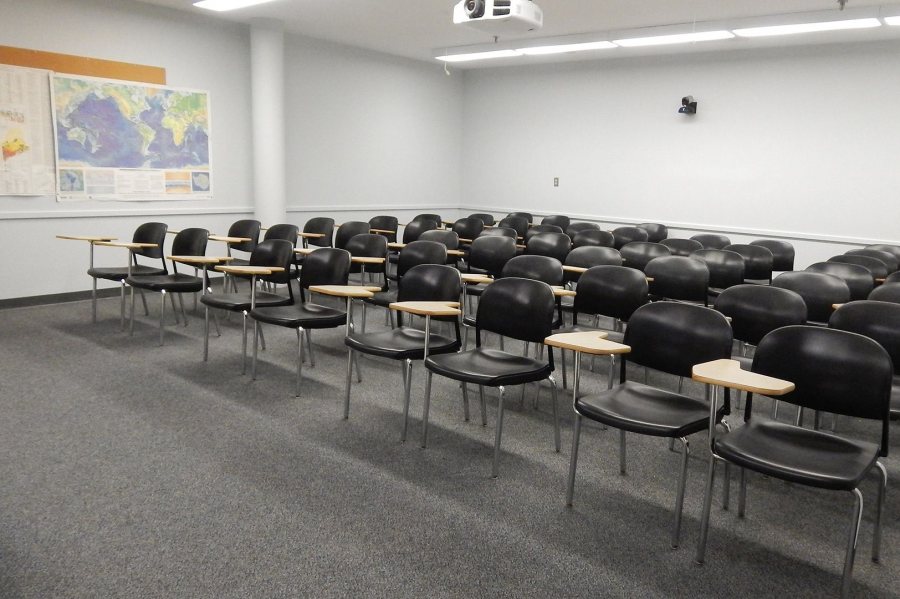 Carnegie 225 on June 14, 2017. To make the room more suitable for active-learning pedagogy, whiteboards will be installed around the walls and the tablet-arm desks will be replaced with node chairs. A window will be placed to the right of the pillar, too, but that’s to make the room seem bigger. (Doug Hubley/Bates College)

This flexible design accommodates a variety of classroom activities. With the hexagon form, six students face each other, supporting collaboration. And hexagons fit together neatly to form larger surfaces.

The trapezoids seat three and can be arranged, say, in a big circle to promote group discussions, or in rows to face an instructor or projector screen (or in rows facing away from each other in case the class is grumpy).

“It’s no longer always the traditional lecture style, so we’re trying not to have a front to the classroom,” says Paul Farnsworth, the Facility Services project manager for the Carnegie renovations. So in lieu of one big writing board that everyone’s supposed to focus on, whiteboards will be mounted on each wall, giving every working group a place to sketch and calculate.

While one projection screen will be big enough for the whole room to view, each hexagon table will have its own computer monitor — and, again with the emphasis on flexibility and collaboration, material from any computer in the room can be displayed on any monitor, including the big screen. 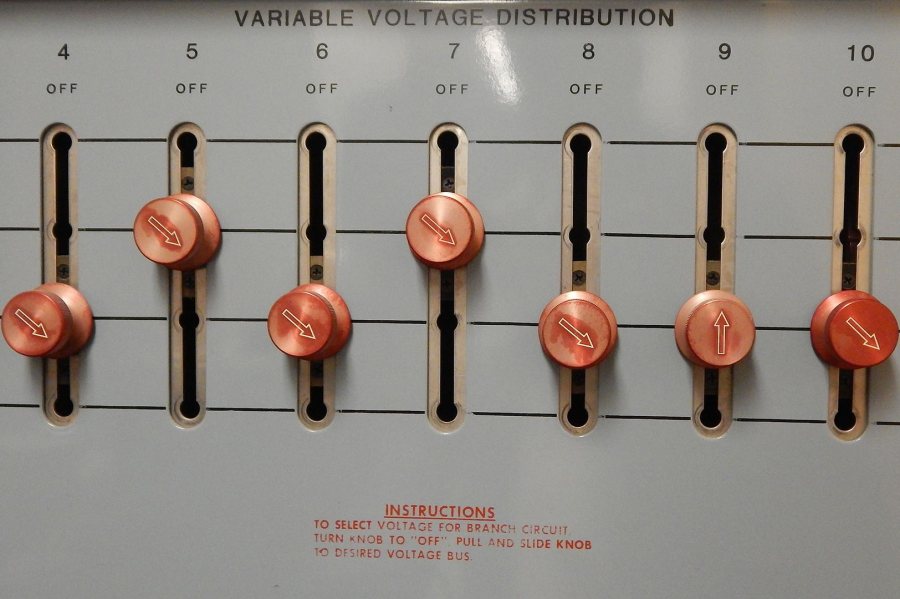 Part of a science-technology array in a storeroom next to Carnegie 339, this Hampden direct-current distributor sends DC — of the voltage of your choice! — to outlets in several classrooms to power lab instruments. (Doug Hubley/Bates College)

What about that structural work, which began with demolition during the week of June 26?

A Lewiston firm, Randall Swan Building and Remodeling, will level the floor of Room 339, which was originally tiered to afford good views of the sage on the stage. The room entrance, now at an awkward angle in the corridor wall, will be set flush and widened.

Overall square footage will be increased by removing two walls, one that encloses a projection booth (that vanishing species) and a second that sets off a long skinny storeroom.

(When we visited in mid-June, the storeroom housed an intriguing assortment of 20th-century lab technology, such as a Hampden rheostat board that can feed direct current, of variable voltages, to outlets around the third floor to power lab equipment.) 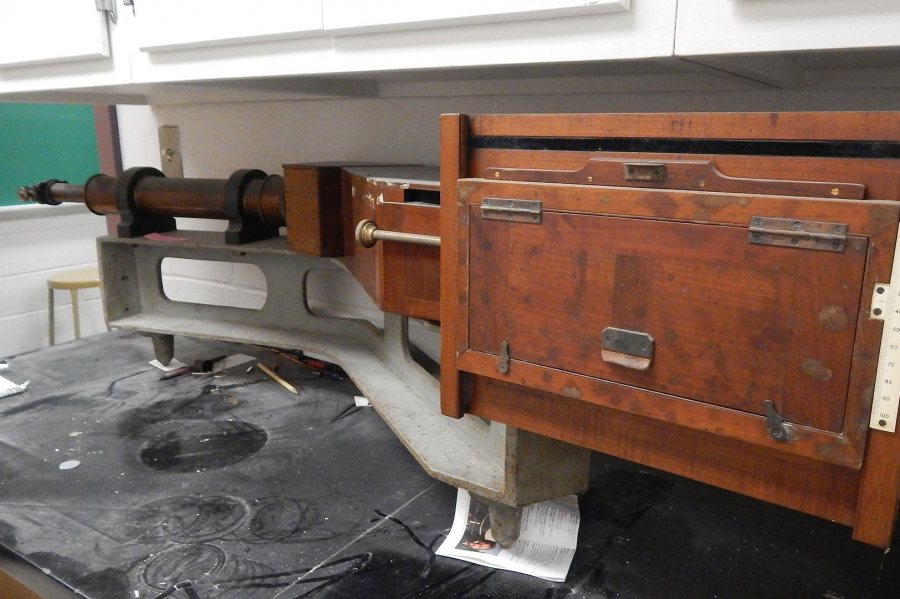 A wooden spectroscope in a storeroom adjacent to Carnegie 339. (Doug Hubley/Bates College)

Downstairs in Room 225, most of the structural work was done last year, including leveling the raked floor. However, this summer a new window will be installed — not to provide a view, since it’s an interior classroom and the window will overlook the corridor — but simply to make the room seem bigger. Translucent film on the glass will minimize distractions from passers-by.

But the furnishings in 225 will change this summer in support of active learning. Forty “node chairs,” wheeled tablet-arm chairs that permit easy rearrangement of the room, will replace 49 standard tablet-arms.

A grant of $150,000 from the George I. Alden Trust is supporting the active-learning renovations in Carnegie. The two rooms will represent, for purposes of contrast and comparison, slightly different approaches to accommodating active learning.

“The project is kind of a test bed,” says Farnsworth, “because we know we’re going to do this again” when Bates builds the new STEM facility and upgrades existing STEM spaces in the not-too-distant future. Faculty and students will be surveyed after the 2017–18 academic year to assess the rooms’ performance.

The built environment, says Mandeltort, is “hugely important” to the efficacy of active learning. “When you have students facing each other around a round table, for instance, you’re changing the dynamic of the room and of the learning experience.

“It’s about them, it’s student-centered, they’re looking at each other. This table is where their ideas will come out, instead of them looking at me as the owner of knowledge.” 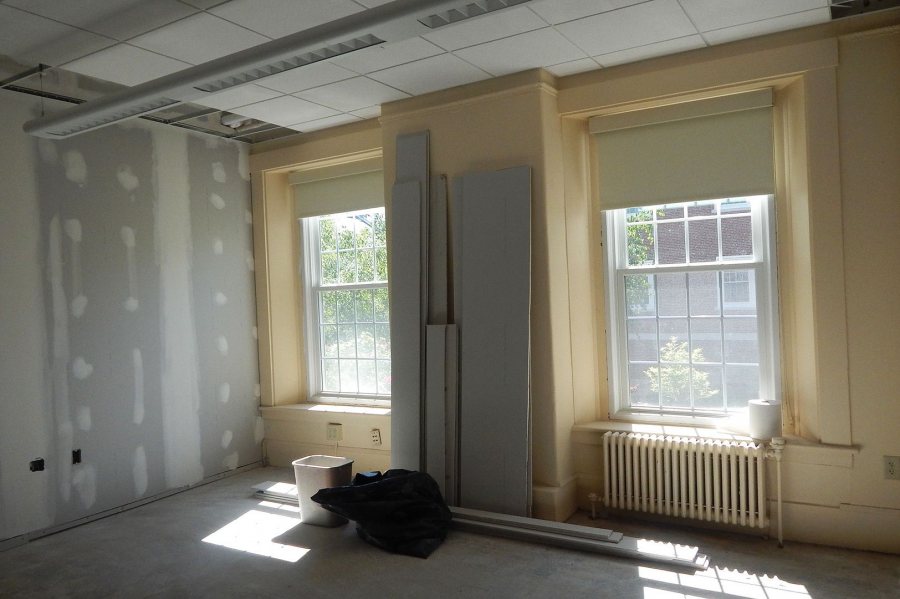 This ground floor space in Hathorn Hall is being renovated into offices for the neuroscience program. (Doug Hubley/Bates College)

Rooms for improvement: Bates needs more office space, thanks to the establishment of the Program in Digital and Computational Studies and the appointments of several postdoctoral fellows supporting faculty and curriculum development.

Accordingly, the first floor of Hathorn Hall is becoming a center for neuroscience with the creation of offices for faculty, who are moving over from Pettengill Hall, and lab spaces.

But even with the neuroscience faculty moving out, Pettengill is still short of offices. So on the first and second floors, departmental lounges are being converted to that use, and other spaces will be remade as replacement lounges.

Finally, in other renovation news, it’s about to become easier to get from Point A to Point B in a big marine biology lab on the fourth floor of Carnegie. Three “peninsulas” — really, really long counters that project into the room — will be replaced with six “islands.”

The peninsulas make navigating the room a tedious proposition. “Everyone’s forced to travel the same long path,” says Farnsworth. “It’s difficult for the instructors to get around” to check in with students.

Can we talk? Campus Construction Update welcomes your questions and comments about current, past, and future construction at Bates. Write to dhubley@bates.edu, putting “Campus Construction” or “Which voltage would you recommend?” in the subject line. Or use the 21st-century commenting system below. 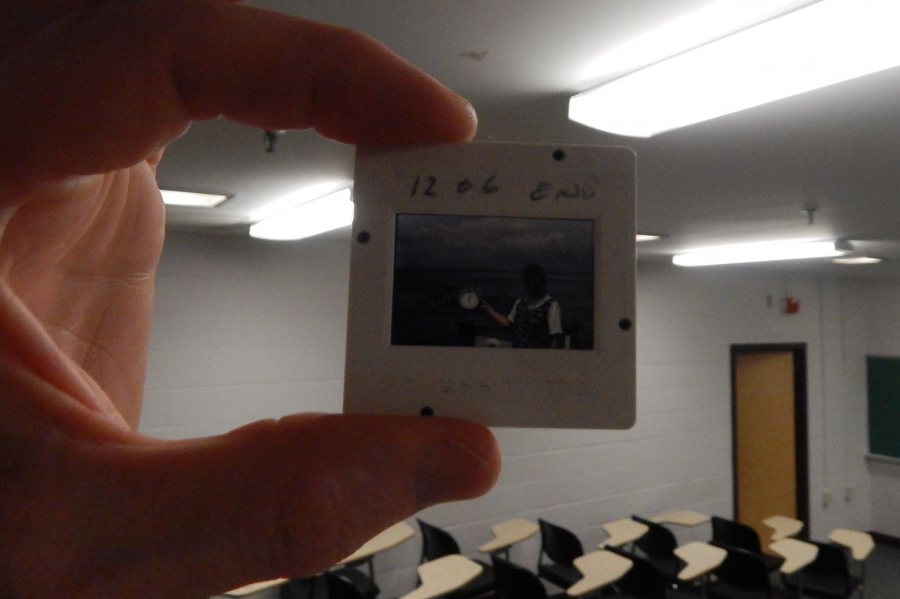