Brie Wilson ’18 of Lewiston has volunteered and worked with organizations in her community since high school.

So when she heard about a Bates student group that gives grants to those organizations, she didn’t hesitate to join.

Each year, a student committee convened by the Harward Center for Community Partnerships decides how to disburse money from the James W. Carignan ’61 and Sally Larson Carignan ’62 Fund for Community Programs — each grant up to $2,000 for specific, sustainable projects that help the organization as well as enhance partnerships with Bates students. This year’s grants total $8,787.

“I learned how many awesome organizations and people we have in Androscoggin County that are working to better the lives of the people living in the county,” she said. “There were some organizations that I didn’t know much about even though I am from the area.”

The fund was established to honor Jim Carignan ’61, Dean Emeritus of the College, who died in 2011, and his wife, Sally Larson Carignan ’62. Since 2007, Bates students have distributed a total of $92,000 to fund projects ranging from materials for Somali Bantu Youth Association of Maine citizenship classes to a smartphone app for the Androscoggin Land Trust.

One of this year’s grantees is the Lewiston Housing Authority, which runs an after-school program at its Hillview Apartments. Seeking to encourage older students to participate in the program, Hillview will use its $1,000 Carignan grant to buy books at higher reading levels. Several years ago, Hillview used a Carignan grant to install dividing walls for its auditorium, allowing the program to host more activities for students. 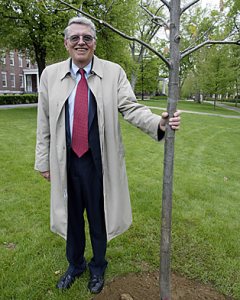 Jim Carignan ’61, in whose honor students distribute grants each year, stands next to the campus oak planted to honor his retirement in 2003. (Phyllis Graber Jensen.)

“The working tools and supplies acquired through Carignan grants are used on an ongoing basis,” said Carla Harris, manager of resident services at Hillview. “Youths’ lives are being impacted in a way that will make a difference now and in their futures.”

Before they give out the grants, the seven students on the committee, all involved in the Lewiston-Auburn community, get up to speed on the ins and outs of nonprofit work and grant writing.

This year, Holly Lasagna, a longtime staff member of the Harward Center who is now with Healthy Androscoggin, explained how nonprofits work and what makes a good grant proposal.

The students then read each proposal on their own and came back together a week later to discuss which ones to select.

“They help each other see things they wouldn’t see otherwise,” said Peggy Rotundo, director of strategic and policy initiatives at the Harward Center and the Carignan fund’s administrator. “That’s beautiful to watch.”

Wilson, who was also on the committee in 2016, said being from Lewiston gave her extra insight into the organizations that applied for grants. Lewiston Middle School, for example, asked for $300 for books for an English Language Learner classroom. Wilson, who attended Lewiston public schools with ELL students, understood the need for books that satisfy both the maturing interests and language skills of older students.

Other proposals were more difficult to choose. “What surprised me about this process was how long we could spend on making a decision on certain grant proposals,” she said. 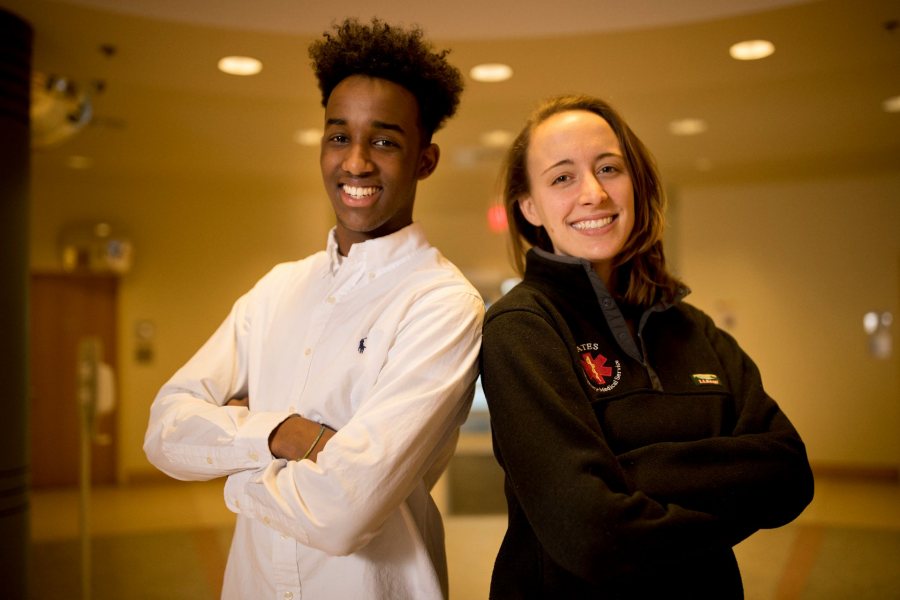 Samatar Iman ’21 of Auburn joined the Carignan committee after being selected for the Bonner Leader Program, a four-year program that connects Bates students with community organizations and offers leadership development.

Iman said he quickly learned what made a good grant application: While he could see that each organization had needs, proposals that were clear, specific, and sustainable were more likely to be approved. Iman said growing up in Auburn helped him understand how the organizations worked with people in his community.

“I was able to connect and relate with a lot of the organizations that were coming in with grant proposals,” he said. “I was able to put myself in these people’s shoes and say, ‘This is actually what we really need.’”

Sitting on the committee also sparked an idea: Iman, a member of the Somali community in Lewiston-Auburn, wants to start a mentorship program for Somali youth, to get them into college and beyond.

Bates students will also help to implement projects funded by Carignan grants. For example, students will help Museum L-A create printed “visitor cards” for self-guided tours, and a Carignan grant will help Pine Tree Legal buy a computer for Bates interns. Since learning about Hillview when she joined the committee, Wilson has started volunteering at Hillview’s after-school program.

For Rotundo, community partnerships reflect the values of education, civic engagement, and social justice that are fundamental to Bates and that Jim Carignan personified.

“He would be so proud to see the respect with which students do their work on the selection committee and the success they have with their consensus decision-making,” she said.