Throw a few darts at a world map, and you’ll probably hit countries where Bates students have spent a semester, Short Term, or full year.

Annually, the college’s Center for Global Education provides access to study-abroad programs in more than 60 countries on six continents (sorry, no Antarctica, at least for undergraduates).

In turn, around 60 percent of Bates juniors study abroad for a semester or the year. Other students join one of the off-campus Short Term courses taught by Bates faculty, or enroll in a Bates Fall Semester Abroad program, also taught by Bates professors.

As part of the college’s efforts to help returning students reconnect with the campus community, the Center for Global Education offers the Barlow Off-Campus Photography Exhibition, giving students a chance to share with their friends, professors, and staff what they’ve seen and experienced.

Here are a few selections from this year’s show — the 18th edition of the popular Bates tradition. 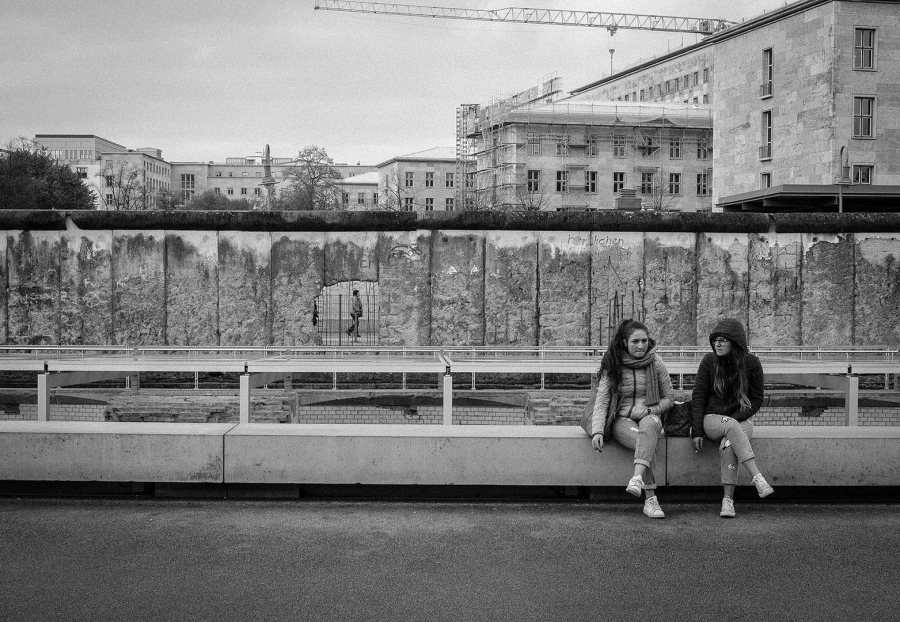 About the photograph: Two women sit and talk over a cigarette; behind them is a section of the old Berlin Wall, and through a hole in the wall one can see a woman walking.

Although I studied in Copenhagen, much of my thoughts revolved around World War II’s impact on the global landscape. This picture to me is a simple sweet moment that reminds us to look backward in order to inform our forward thinking. 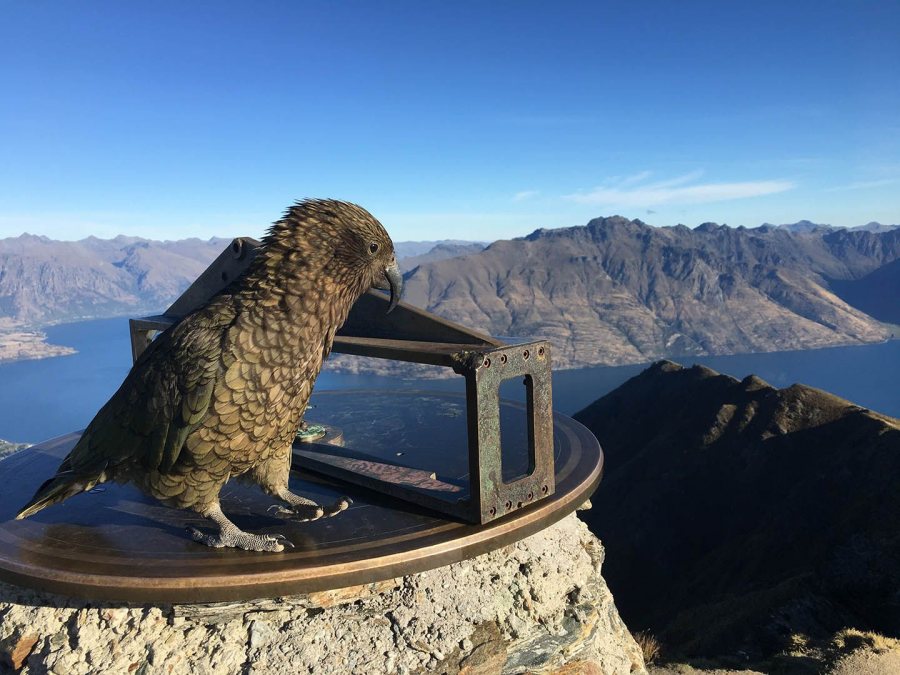 About the photograph: I was met by a kea, an alpine parrot native to New Zealand, at this peak overlooking Lake Wakatipu. Keas are known to be curious and intelligent birds, and this one did not hesitate to rummage through my backpack when I wasn’t looking.

This picture reminds me of the great feeling of reaching a summit; it also exemplifies the value of experiencing nature and taking a break from other obligations — untouched natural beauty is incredibly refreshing. 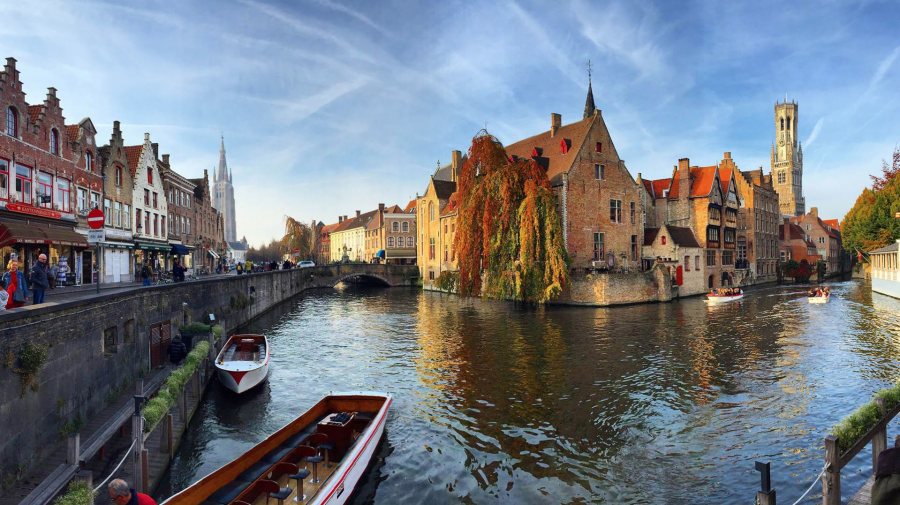 About the photograph: On a weeklong study tour with my class in international trade economics, we traveled to Belgium and France, including a stop in the Belgian city of Bruges. This photo was taken right before a boat tour through the canals in the town.

About the photograph: One day near the end of my program, a friend and I traveled to Cerro de Tío Pío, a park in the Madrid neighborhood of Vallecas. We’d been trying to escape the touristy sites downtown, and my host mother had told me that this park is a hidden gem. She was right.

This photo captures one success on our search for authentic Spain. As the sun fell and lights began dotting buildings and monuments before us, we spoke in Spanish about the stateside homes that we soon would be returning to. In the moments of silence between our stories, we could hear Spanish — and only Spanish — drifting our way from the Madrileños on the picnic-blanketed hill around us. 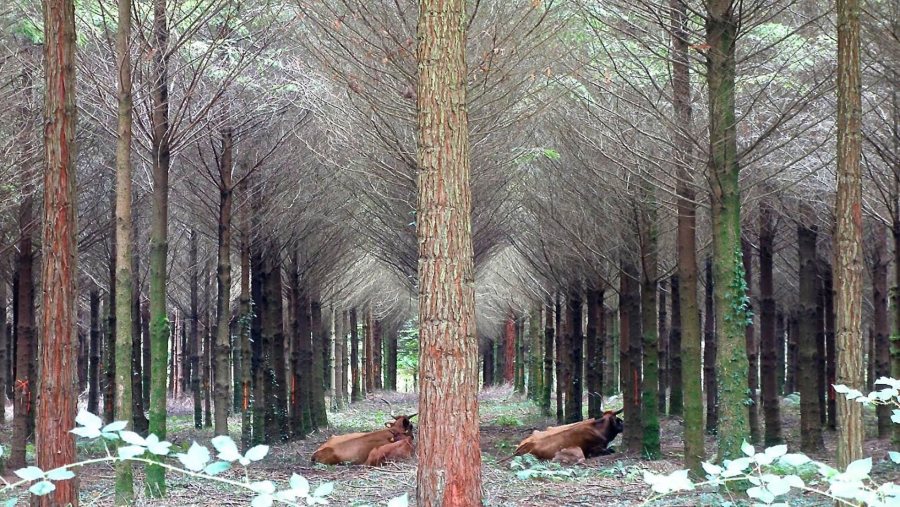 About the photograph: Trekking the Camino de Santiago in the north of Spain with the Bates group, we stumbled upon this view: two cows with their calves resting in a tree farm. The scenery was truly something out of a fairy tale. Our group was sweaty and exhausted from our 30-mile hike over two days, but we made sure to document the moment. 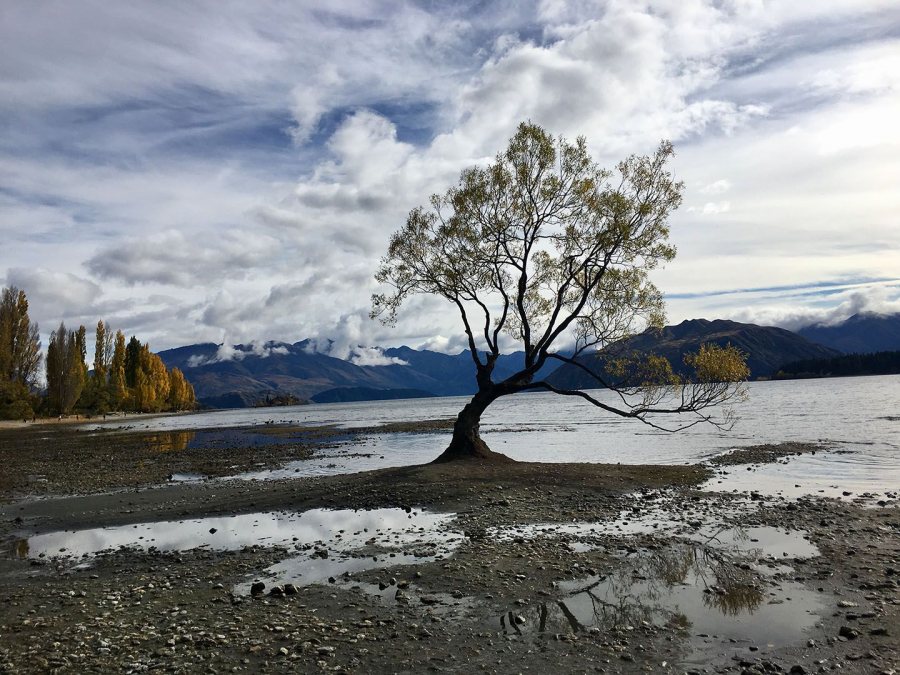 About the photograph: Although I felt like a tourist taking a photo of the classic Lake Wanaka Tree, it was just one of the many beautiful sights in New Zealand. Everywhere we traveled there were incredible people and unique landscapes.

While there were countless hikes one could take to explore New Zealand, this tree was interesting because it was just right off the street of this little town. It exemplifies how no matter where you are in New Zealand, you can just look off into the distance and there will be something wonderful to explore (and photograph)! 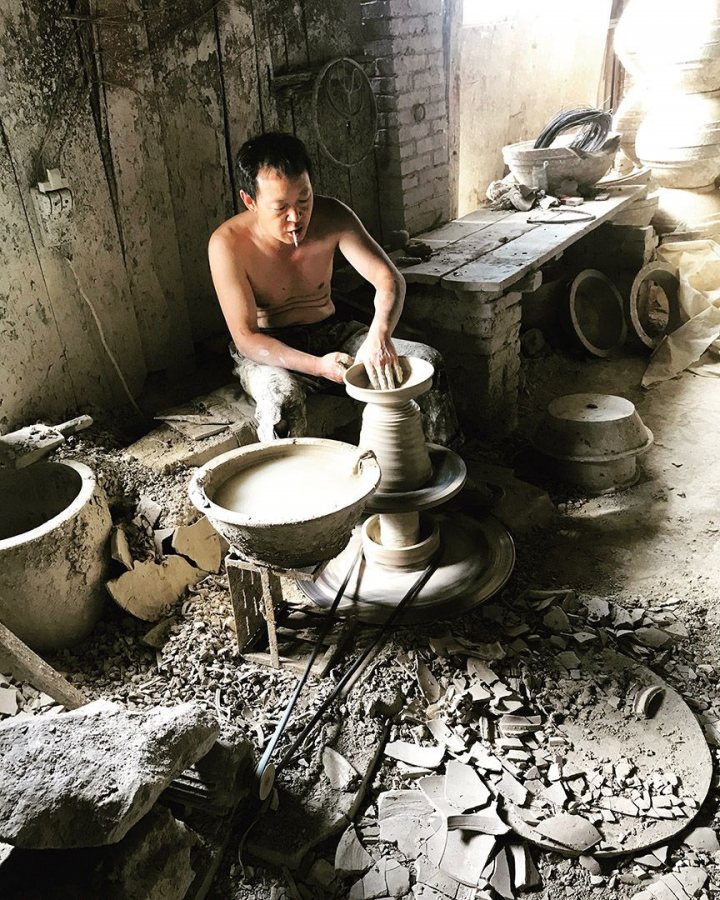 About the photograph: During my program, I studied Jianshui purple pottery, one of China’s four famous types of pottery. Working with a local potter, I learned the main techniques and created my own tea set as a final product for a creative independent study project.

This artist was introduced to me by the potter I worked with. Working in a large-scale production factory, he has a different style of throwing on the wheel than the potter I studied with, which creates a distinct style of Jianshui pottery. 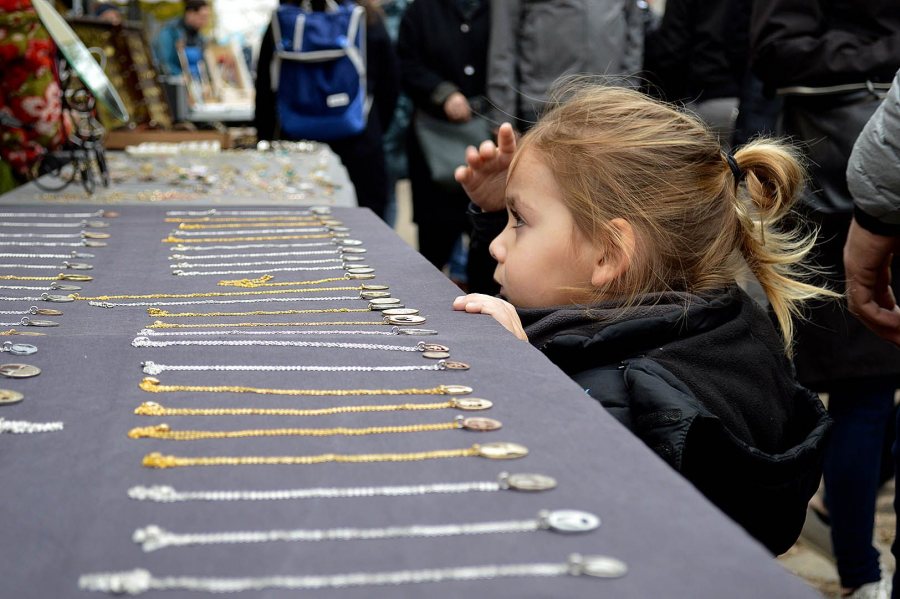 About the photograph: While on a weekend trip to Berlin, we visited the famed flea market at Mauerpark.  Hundreds of stands were filled with handmade jewelry, trinkets, bags, local food, and crowds of people. This little girl was fascinated by the necklaces laid out on one of the tables, and she was the perfect example of how a weekend visit to the market is always a family affair with something for everyone. 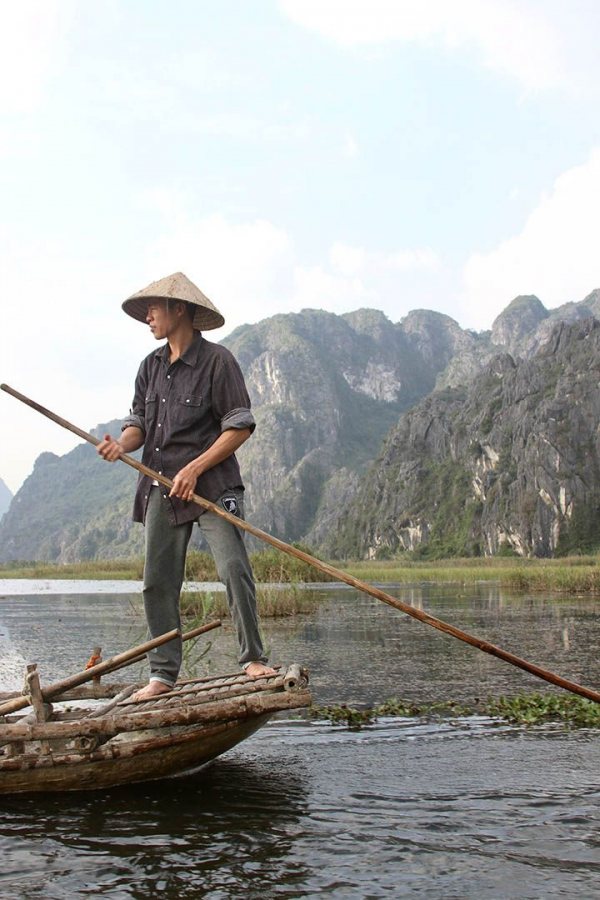 About the photograph: In the Van Long Nature Reserve in Vietnam’s northern province of Ninh Bình, a rower guides a boat of tourists through the reedy wetland and limestone pinnacles. My host family from Hanoi drove me here, two hours outside of the city, to see the endangered Delacour’s langur and many rare bird species. 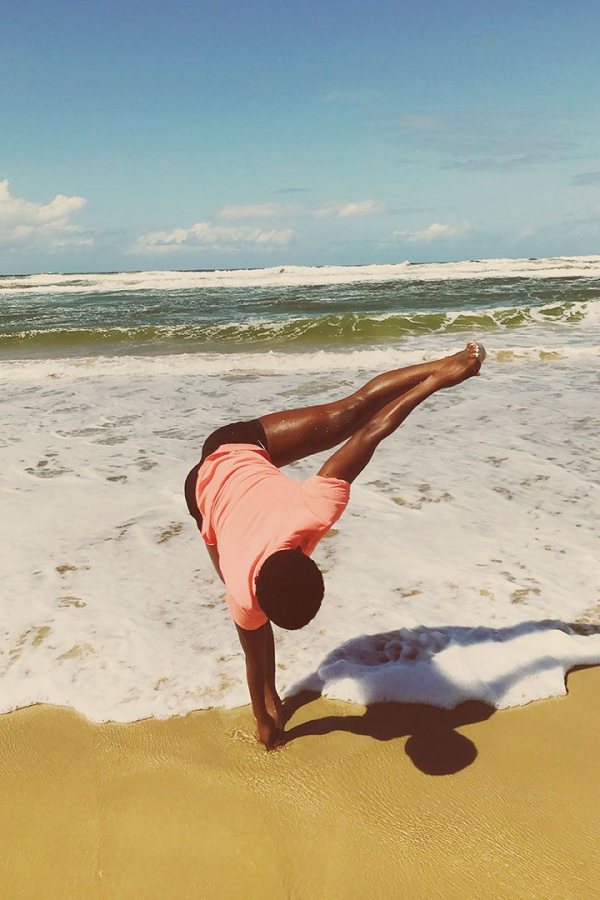 About the photograph: “The cure for anything is salt water: sweat, tears, or the sea.” — Isak Dinesen 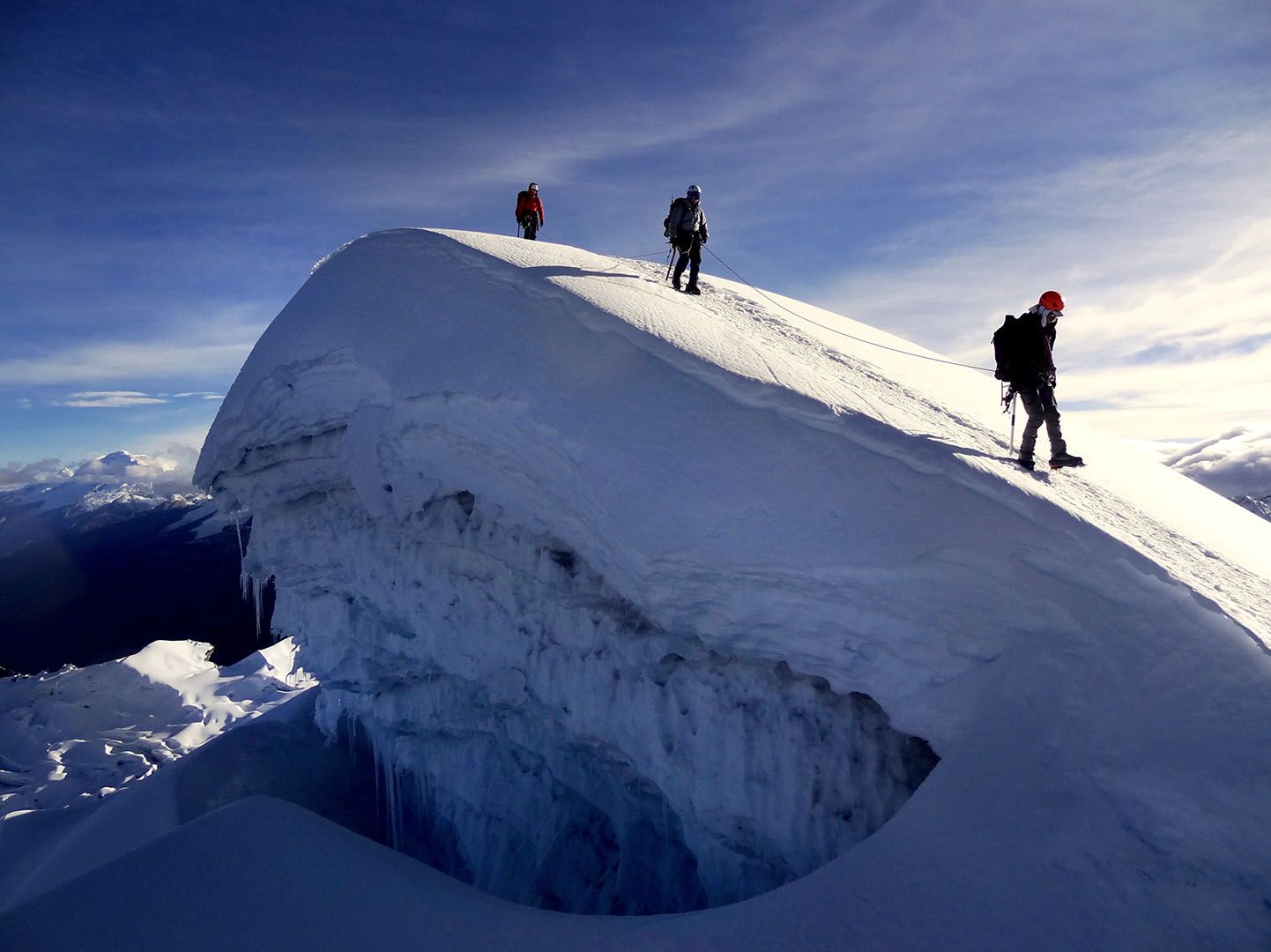 About the photograph: Our research team descends from the summit of Vallunaraju, a mountain 18,655 feet tall in the Peruvian Andes, at around 6 in the morning in July 2017. We’ll proceed to collect 10 kilograms of snow samples for our study of black carbon (soot) deposition within the region.

The experience was distinctive for how it coupled mountaineering and scientific research in order to understand the impacts of climate change on remote mountain environments. 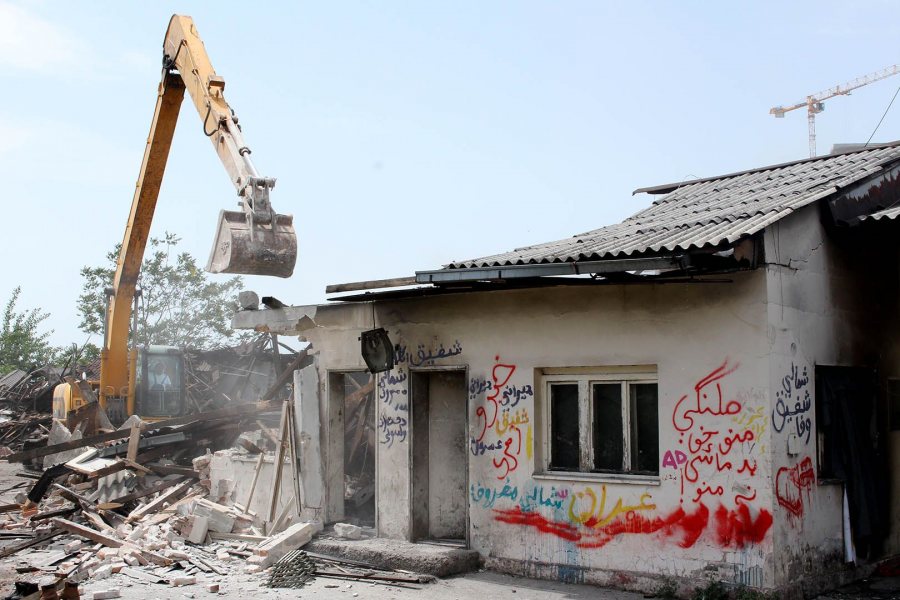 About the photograph: A government contractor begins to demolish “the Barracks,” a derelict warehouse complex that became an impromptu shelter for more than 1,500 refugees and other migrants attempting to reach Western Europe during the winter of 2017.

During my semester in Serbia I spent much of my free time volunteering with NGOs providing humanitarian assistance to this spontaneous community.

This photo marks the end of that saga, as the Serbian government forcefully evicted the residents and tore down the complex to make way for a luxury housing development in May. 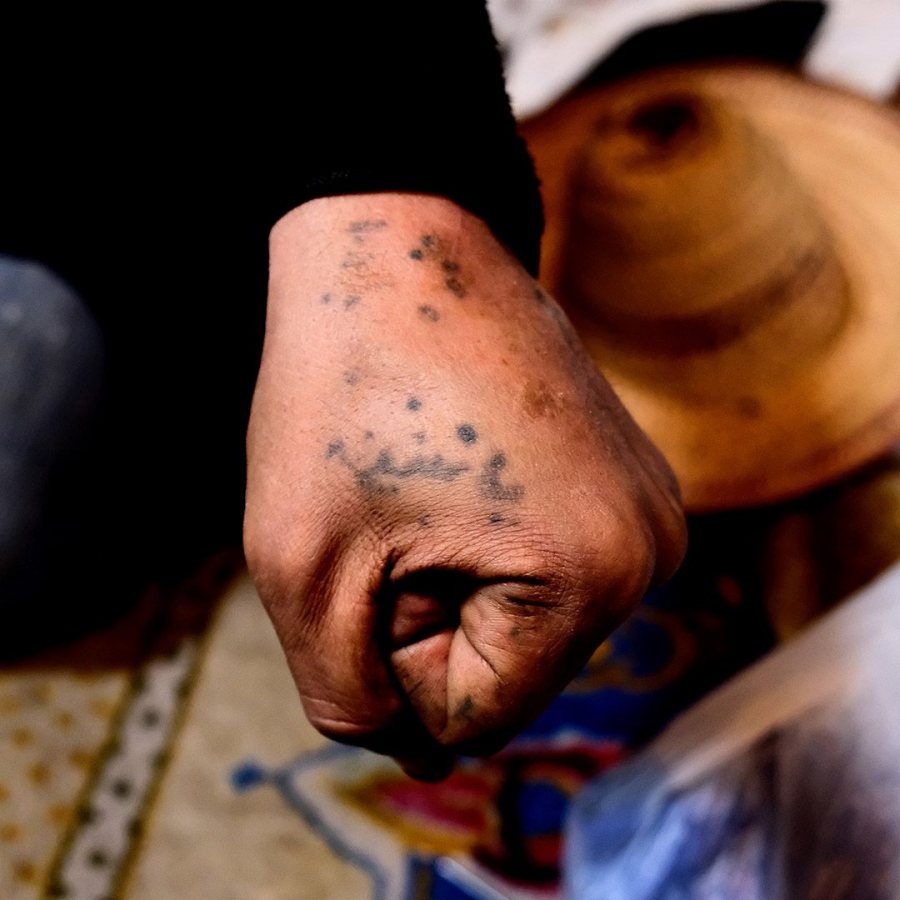 About the photograph: Taken in the historic Jewish quarter of Marrakech, this photograph shows a Moroccan prison tattoo with the name of the recipient’s father. 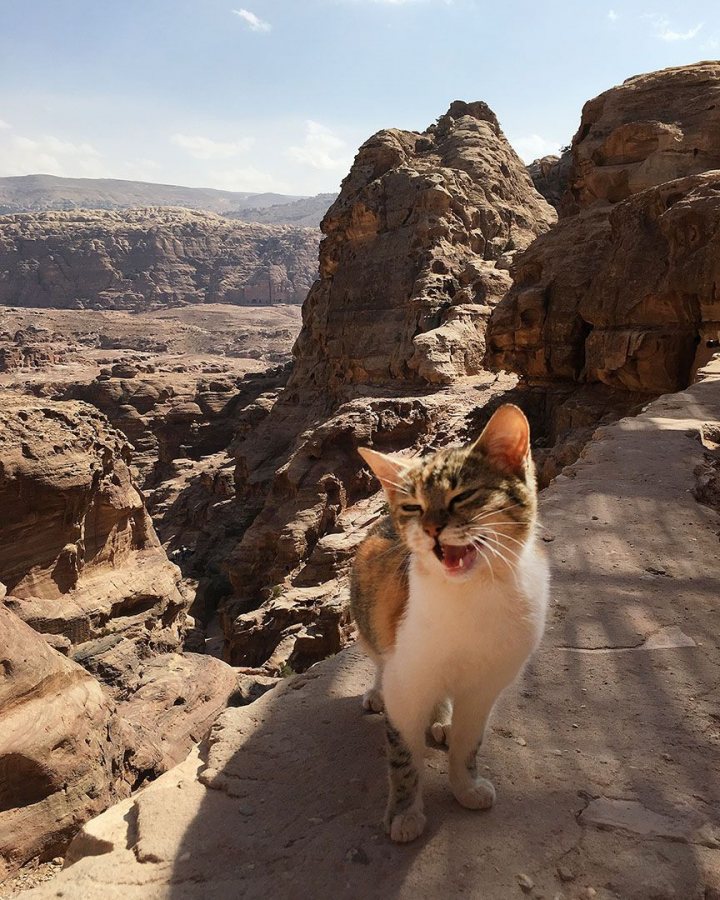 About the photograph: This cat climbed a mountain with me. From the Treasury of Petra, he followed me up a steep, rocky hiking trail to the Monastery, waiting on the edge of a cliff for us to get off our donkeys and give him the attention he deserved. 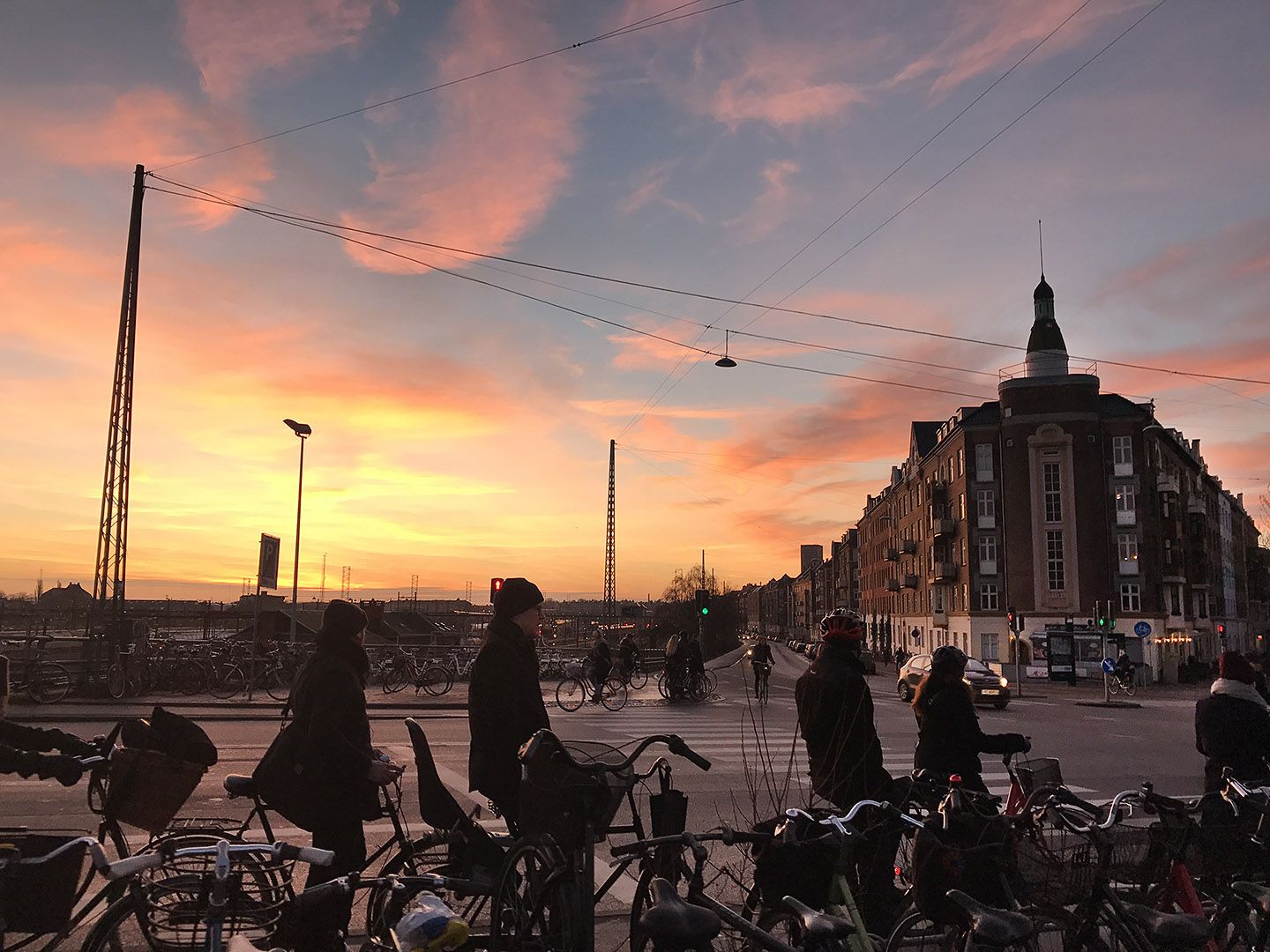 About the photograph: This photo was taken at sunset, just outside the Dybbølsbro train station. I had a particular fondness for this neighborhood, as it was home to Copenhagen’s red light district, an area I visited several times for my core course, “Prostitution and the Sex Trade.” This photo captures Danes biking home on their daily commutes, the city’s natural beauty, and one of the few times I actually saw the sun. 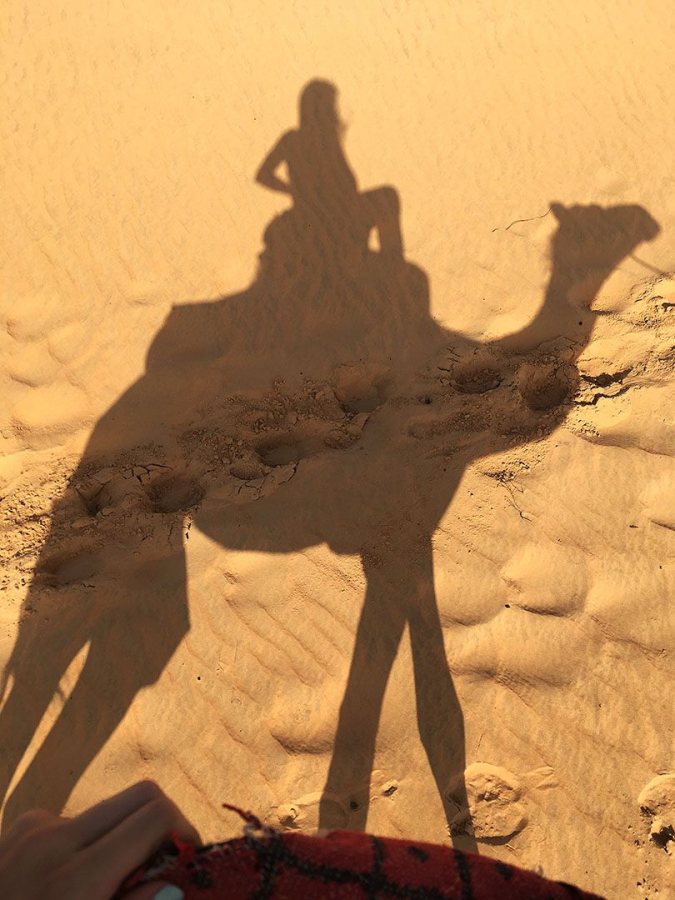 About the photograph: After studying biodiversity and natural resource management in Madagascar during my junior year, I traveled to Saint Louis, Senegal, last summer, where I lived with a host family and studied French intensively.

One of my favorite adventures in Senegal was traveling to the Lompoul Desert with two new Italian friends, Francesca and Valentina. During our trip, we rode camels, hiked sand dunes, and spent a night camping under the stars.

Since I did not speak Italian, and they did not speak English, our common language was French. The entire weekend became a hysterical but wonderful mix of all three languages. 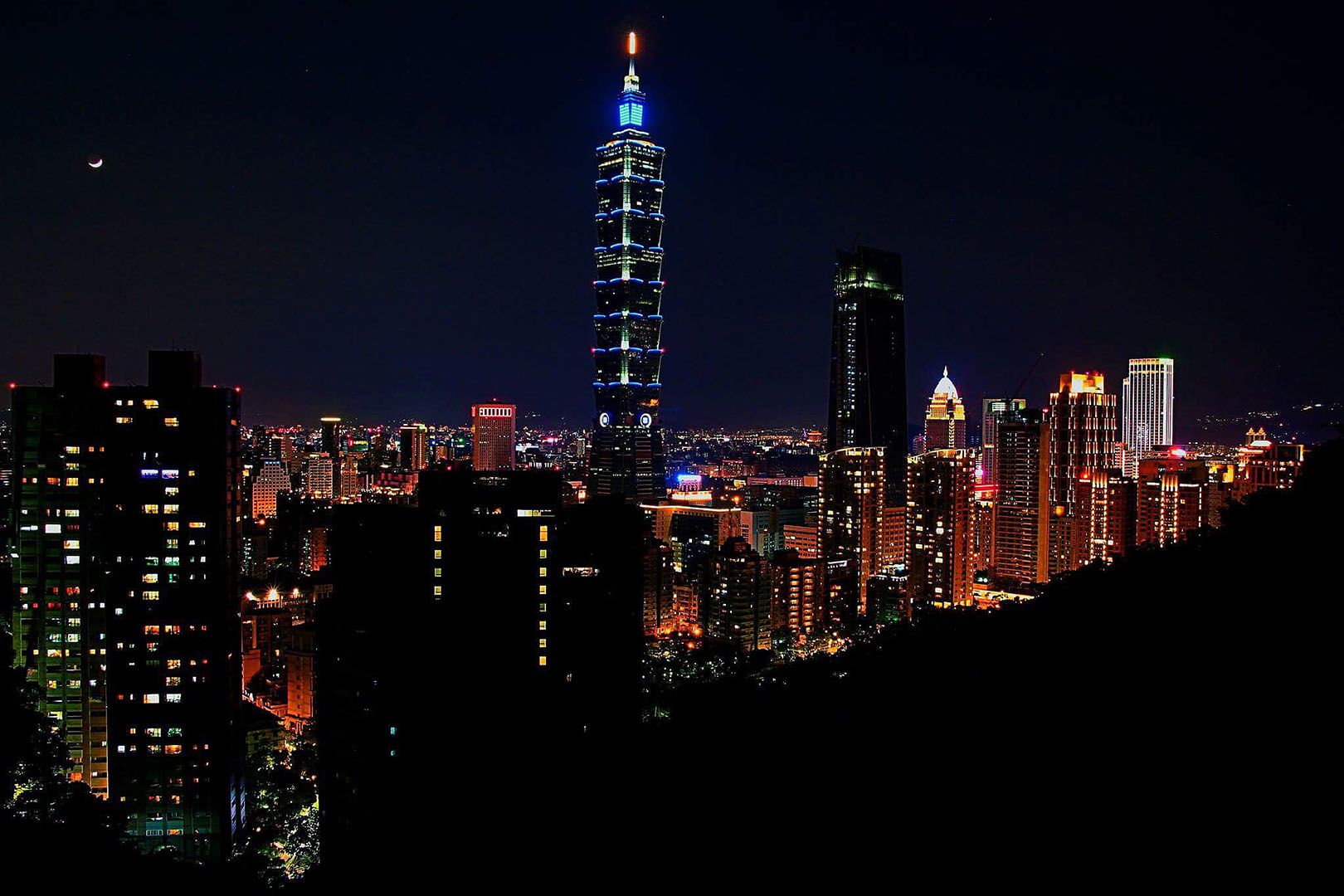 About the photograph: This picture of Taipei in the evening was taken after a 45-minute hike up Elephant Mountain. Not a lot of people know what Taiwan has to offer. In that way, my study-abroad experience was about finding gems in unexpected places.

I loved how Taiwan offered both city and natural attractions — a paradise of two worlds. 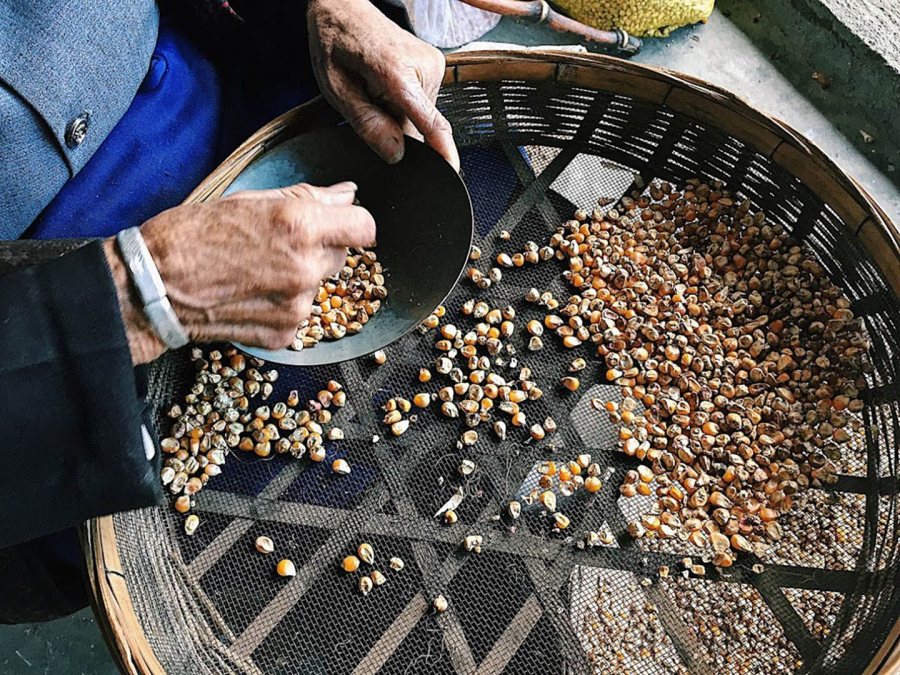 About the photograph: This photograph shows my host grandmother sorting corn in a rural Bai minority village in Shaxi, Yunnan.

My homestay household had traditional and modern aspects — representative of the ever-changing social landscape in China today. Certain attitudes persist, including the belief that not even a grain of rice (or in this case, a kernel of corn) should go to waste.

As part of her daily household duties, my host grandmother would carefully sort the better kernels from the scraps, which were fed to the family pig. On chilly mornings, she sat near a small brazier filled with reused charcoal.