Antarctica’s geography is characterized by its mountains, desert climate, and, of course, all that ice.

But it also has plenty of lakes — some under a few feet of ice in a landscape that resembles Mars, others filling the space between the earth and kilometers-thick glaciers, made liquid by sheer pressure.

This is Part 4 of a series about Bates alumni who spent this winter in Antarctica.

Part 1: If glaciers could talk, what would they say?

The lakes are what brought two Bates alumni, Carolynn Harris ’11 and Billy Collins ’14, to the southernmost continent. Both graduate students at Montana State University, they participated in separate projects aimed at accessing liquid water beneath the permanent ice cover and studying the microscopic life that might persist there.

Studying what lives in the lakes, they say, can tell us how life persists in the most extreme conditions and gives us clues to what might be living beyond Earth’s orbit.

Harris is a doctoral student in ecology and environmental science at Montana State. At Bates, for her senior thesis in biology, she analyzed fish bones from archaeological sites in Penobscot Bay, Maine. She had two thesis advisers: Professor of Geology Bev Johnson and Professor of Biology Will Ambrose. 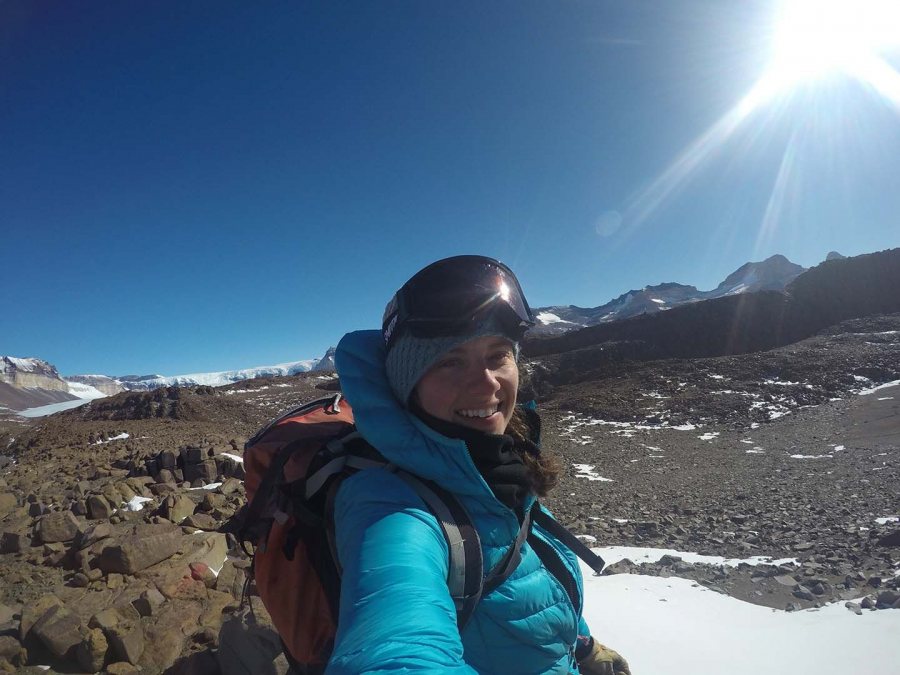 Carolynn Harris ’11 takes a selfie in “the Labyrinth,” a seven-mile hike through canyons in the McMurdo Dry Valleys. “The topography here is so similar to Mars, NASA brought rovers here for testing,” Harris says. (Courtesy of Carolynn Harris)

Harris continued to work at the intersection of biology and geology as a graduate student in marine science, then back at Bates as a research associate to Ambrose, before starting her doctoral program.

“Without getting that interdisciplinary exposure through my senior thesis experience, I wouldn’t be where I am today,” she says.

Collins, meanwhile, is working toward a Master of Fine Arts in science and natural history filmmaking, also at Montana State. A Bates psychology major and avid outdoorsman, he explored his interest in filmmaking during a Short Term independent study with Lecturer in English Robert Strong, directing, shooting, and editing a film his friends wrote. Collins realized he could see himself doing this for a living. 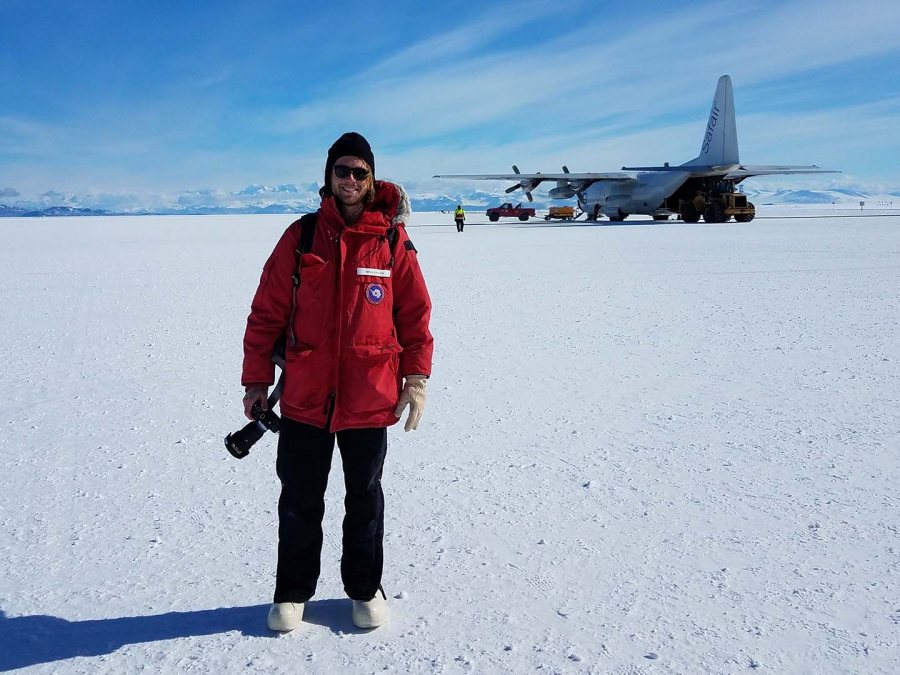 Billy Collins ’14 poses for a photo shortly after arriving in Antarctica. (Courtesy of Billy Collins)

“Having the freedom to spend a Short Term on one creative project was an incredible experience and really influenced my decision to pursue filmmaking as a career,” he says.

Last Antarctic summer, which was Maine’s winter, Harris worked in the McMurdo Dry Valleys, “the coldest, driest, and windiest desert on Earth,” she says. Her research was part of the McMurdo Long Term Ecological Research project, which has been working in the Dry Valleys since 1992.

Solar panels, equipment sheds, and a camp hut sit on the shore of Lake Fryxell in the McMurdo Dry Valleys. “We cook our meals in the hut, which is equipped with propane heat and a propane stove,” Carolynn Harris says. “We sleep in tents on the lake shore.” (Courtesy of Carolynn Harris)

Collins, meanwhile, is the education and outreach graduate appointee for the Subglacial Antarctic Lakes Scientific Access Project, a large group of scientists and educators who study the life and ecology of subglacial lakes.

In 2019, SALSA will drill through 1.2 kilometers of ice to study the biology and geology of Lake Mercer, on the Whillans Ice Plain.

Harris studies the nutrient dynamics of the lakes in the McMurdo Dry Valleys. These bodies of water, capped with more than 10 feet of ice, are closed systems — water flows in from glacial-melt streams, but it doesn’t flow out, Harris says. The lakes are also very salty and very cold.

But despite those conditions, microbes call the lakes home.

“The driving question is how they survive and persist in such a harsh environment,” she says. 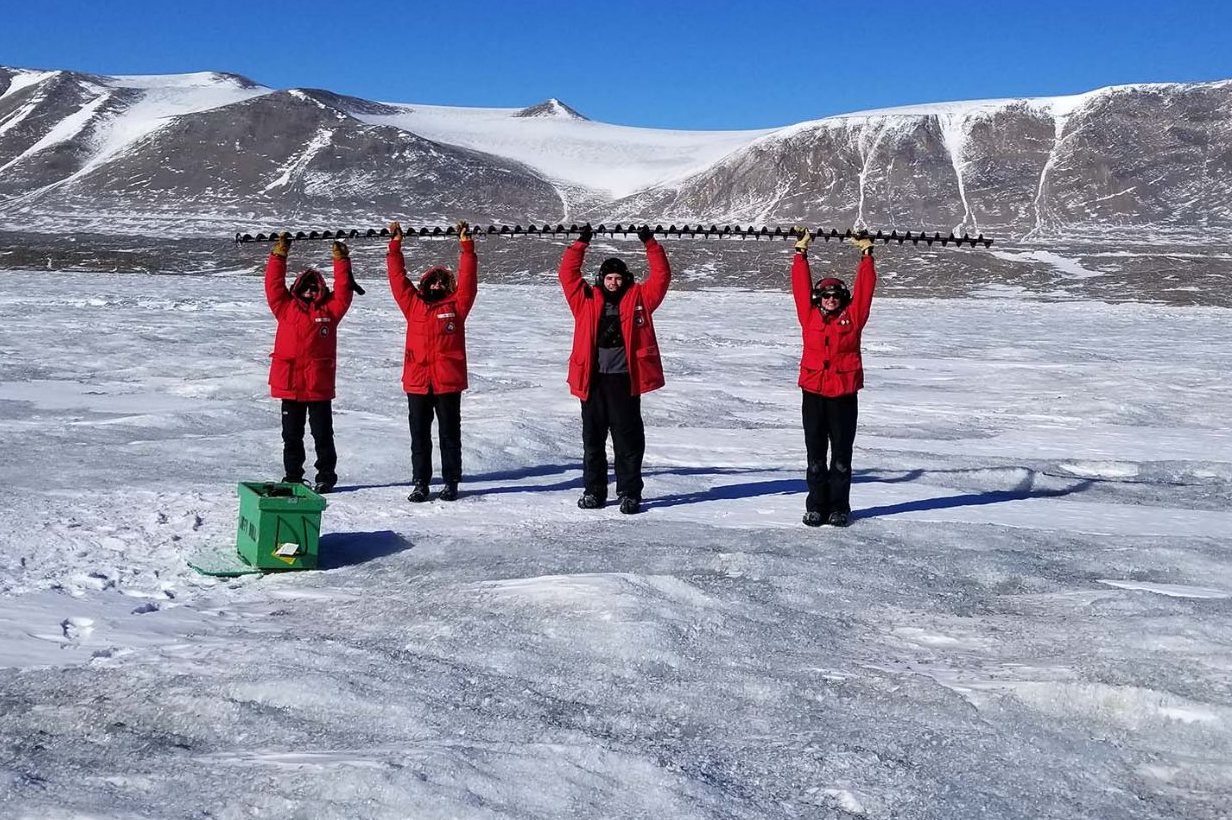 Carolynn Harris, second from left, and her team hoist 12 feet of drill “flights,” used to drill through ice to reach the lakes below. Each flight is three feet long. “Lake Fryxell has the thickest ice of our field sites, almost 15 feet,” Harris says, “so it takes five drill flights to get down to the liquid water.” (Courtesy of Carolynn Harris)

To find out, Harris’ team drilled narrow holes through the ice capping several lakes and took samples of water and sediment. She’s analyzing the samples now.

“The things that we learn about how the microbial part of the food web operates can tell us about other ecosystems, too,” she says.

Over on the ice plains, SALSA team members towed about a million pounds of equipment 600 miles across Antarctica to the ice above Lake Mercer, so that it will be set up and ready for the 2019 drill.

Collins flew in with cameras and a drone to document 100 of those miles, filming and photographing the group as it used radar to chart a crevice-free path to the lake, made a snow runway for aircraft, and built berms for equipment.

“There were some days where I was able to do a lot of filming and photographing, and other days we were driving and I had short windows where I could go out with the drone,” Collins says.

Understanding what can live in the cold and darkness underneath the glaciers could have an impact beyond Earth’s atmosphere, Collins says.

“They’ll be looking for little microscopic life forms down there,” he says. “It could give clues to where life could exist in our solar system, like on the ice moons of Jupiter and Saturn.”

Life on the SALSA traverse to Lake Mercer was on modules — “basically trailers on skis,” Collins says. One of them served as a kitchen, and another had bunk beds and windows that could be blacked out to make sleep possible in the 24-hour Antarctic summer sun.

“It was like being in the hull of a ship, but on ice,” Collins says. 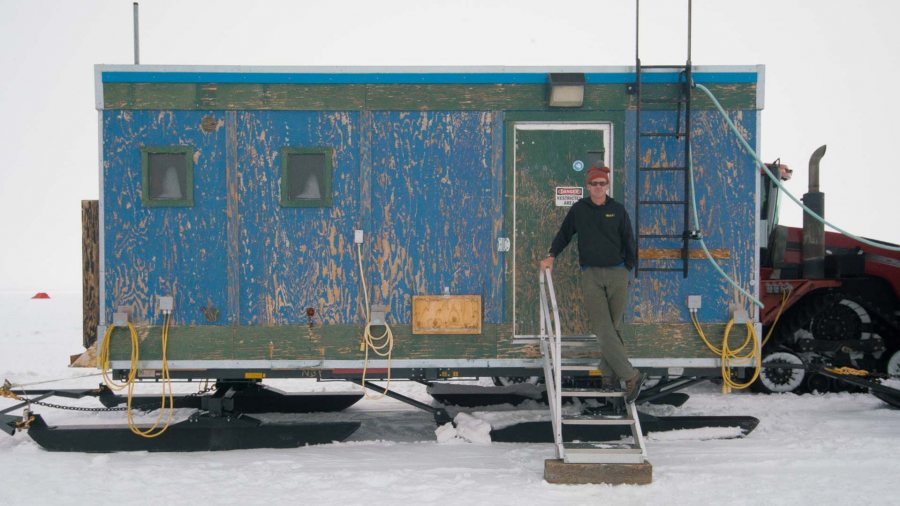 Harris, in the McMurdo Dry Valleys, lived at a series of lakes, most of which had a permanent wooden hut with propane heat and a stove for cooking. Harris and her team slept in tents.

Water was readily available — they could chip lake ice or go to a glacier and collect fallen “glacier berries” — but water conservation was still paramount.

“Once we melted the water and used it for cooking, or for the one shower you can take a week, all that wastewater has to be collected and shipped off the continent,” she says.

Harris says her team’s equipment got around via helicopter, but the team itself often hiked from lake to lake.

And what made blackout curtains a necessity at night made hiking glorious by day. “It was full sunlight all day, every day,” she says. 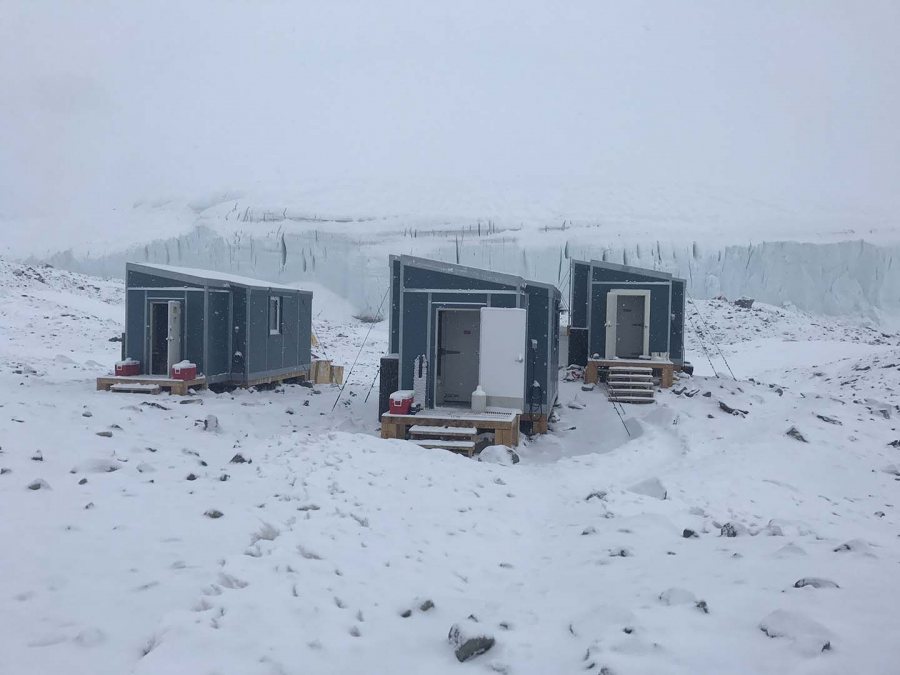 Three laboratory buildings at Lake Hoare in the McMurdo Dry Valleys serve different purposes: One is used for experiments involving radioactive chemicals, one houses data collection instruments, and one is known as the “‘lab lab,’ where we process water and sediment samples,” says Carolynn Harris. (Courtesy of Carolynn Harris)

“It was around two to four miles from one lake to the other, and it was some of the most beautiful hiking I’ve ever done in my life.”

Antarctica is the world’s largest desert, and its dryness means there’s a lot of static electricity. And static is not good for cameras.

“If you step away from the camera for 10 minutes, you can build up static in your body, and when you touch the camera it can fry the electronics,” Collins says. “When you’re out in the field and dealing with electronics, you’re constantly trying to find metal things to touch” to discharge the electricity. 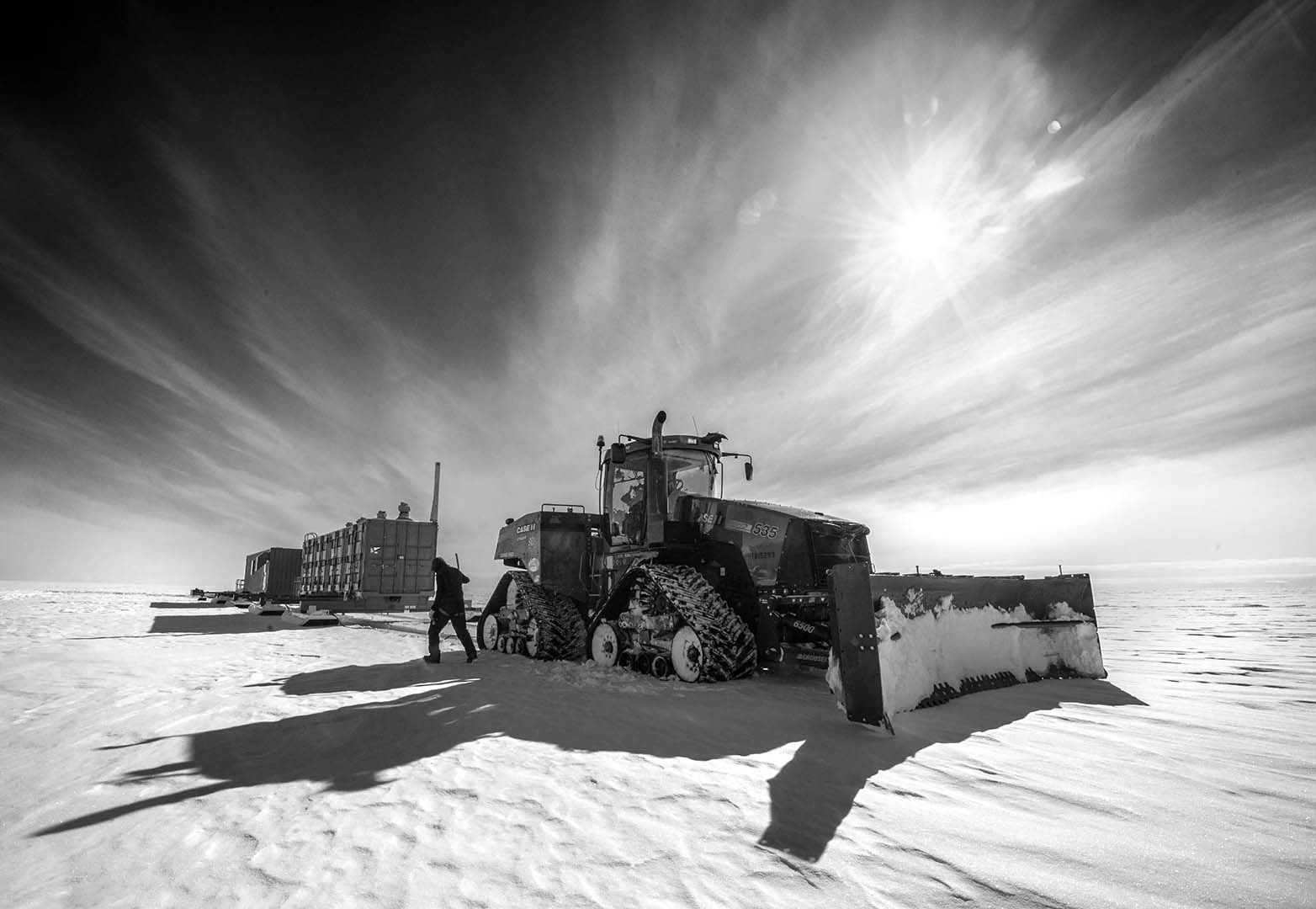 Harris, currently analyzing samples, plans to return to Antarctica each year to conduct research for her doctorate.

Collins will be a camera assistant for the actual drilling to Lake Mercer in 2019. In the meantime, he runs SALSA’s website and Instagram, he’s created a documentary about SALSA’s journey to Lake Mercer, and he’s traveling around Montana, presenting his work to schoolchildren. 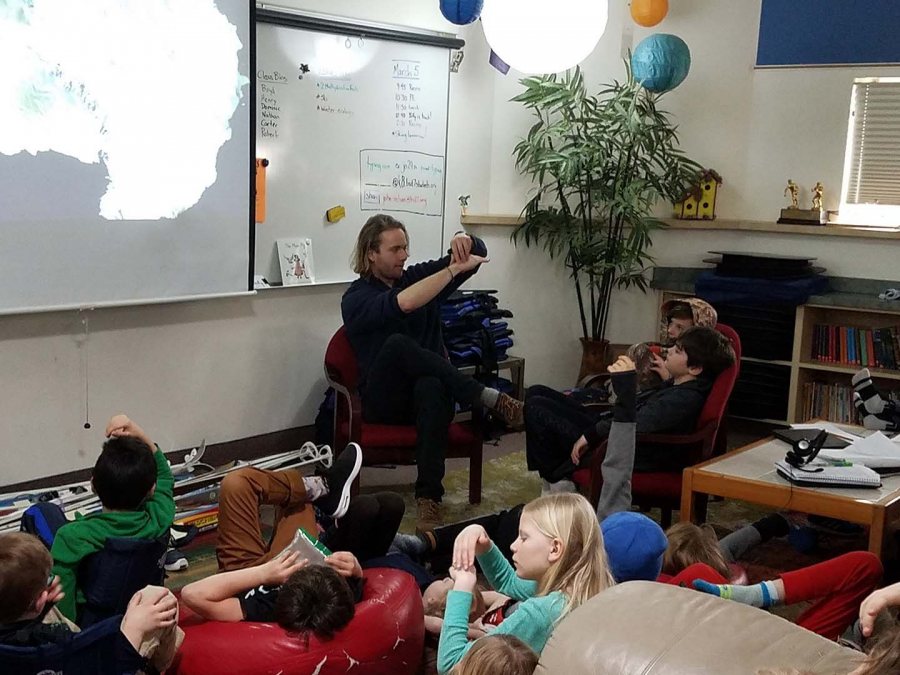 Billy Collins talks about Antarctica and SALSA to third-graders at Longfellow Elementary School in Bozeman, Mo. (Courtesy of Billy Collins)

“What’s cool about this project is that it’s funded by taxpayer dollars, and the lead scientist believes that the scientists owe it to the public to get out as much information about what they do as possible,” he says.

Bates Club of Antarctica: Fossils, and beach volleyball on a glacier