When NASA agreed to help Assistant Professor of Physics Aleksandar Diamond-Stanic observe a distant galaxy, the agency threw in a bonus: seats for the professor and his students aboard the world’s largest airborne observatory.

Known as the Stratospheric Observatory for Infrared Astronomy, or SOFIA, the repurposed Boeing 747 carries a 2.5-meter telescope capable of detecting infrared radiation from billions of light-years away.

Flying at 40,000 feet, SOFIA is able to rise above many of the infrared emissions from Earth’s atmosphere that might interfere with readings from such a faraway galaxy. 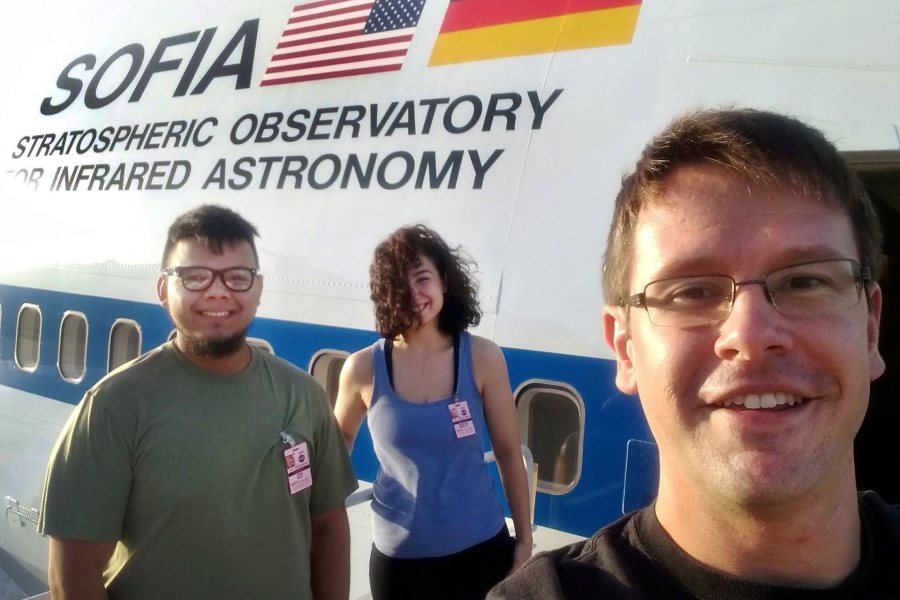 Assistant Professor of Physics Aleksandar Diamond-Stanic snaps a selfie with his students, Jose Ruiz ’19 and Becca Minsley ’20, in front of SOFIA, the world’s largest airborne observatory.

A powerful telescope at a great height was what Diamond-Stanic needed to observe the galaxy J1613+2834, which is 4.7 billion light-years away and has a black hole at the center.

Ultimately, he wants to parse out “the ultimate power source of the light produced by such galaxies, in particular the balance between light from newly formed stars and light from a supermassive black hole,” he says.

Part of a consortium, led by Christy Tremonti of the University of Wisconsin–Madison, that studies such galaxies to understand star formation, Diamond-Stanic works closely with Bates students on these questions. He invited two of them along for the ride: José Ruiz ’19 of Lawrence, Mass., and Becca Minsley ’20 of New York City. 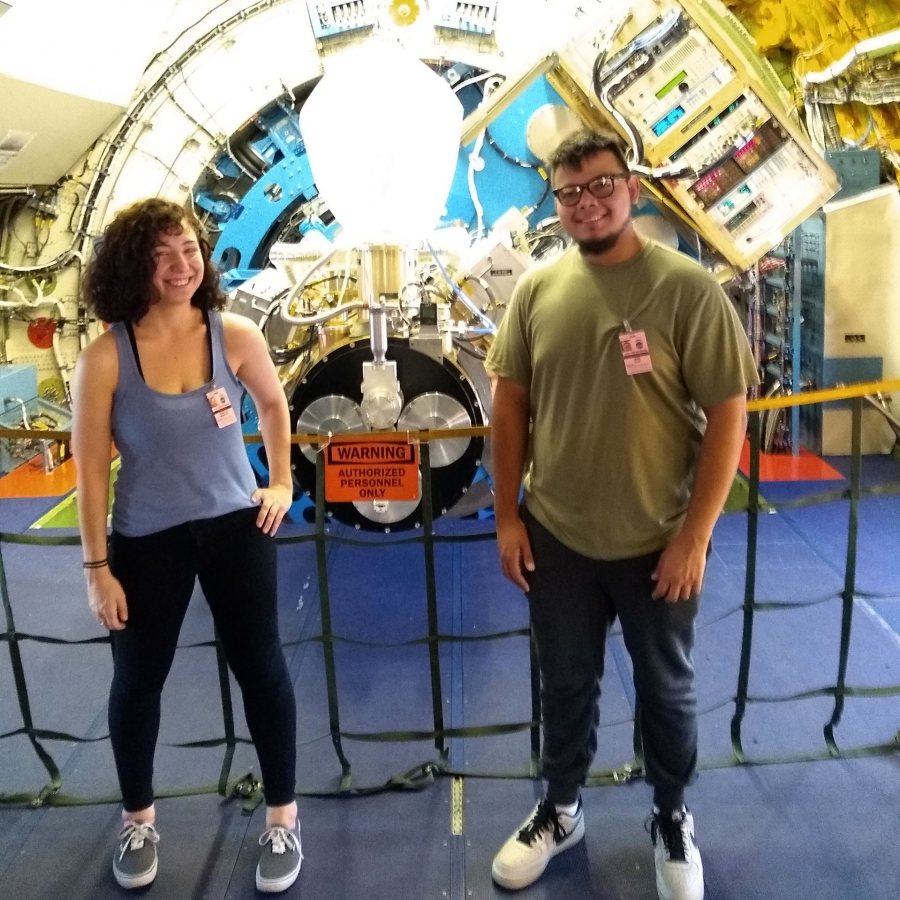 Before takeoff, Becca Minsley ’20 and Jose Ruiz ’19 pose in front of SOFIA’s 2.5-meter telescope, which can detect infrared emissions from billions of light-years away. (Courtesy of Aleksandar Diamond-Stanic)

Ruiz and Minsley had both spent summers in Diamond-Stanic’s Galaxies Lab. And both had traveled with Diamond-Stanic to New Mexico’s Apache Point Observatory. Minsley has worked alongside other students in the lab analyzing data from the Hubble Space Telescope.

“It’s cool to see the ways to try to get any data, any information about these types of galaxies from all of these different sources,” Minsley says.

To get data from this particular source, Diamond-Stanic, Ruiz, and Minsley traveled to Palmdale, Calif., where SOFIA is based, on Sept. 21. On the day of the flight, Minsley was unable to go along, but after safety and scientific briefings, Diamond-Stanic and Ruiz boarded the plane.

SOFIA took off with some uncertainty — though its telescope is one of the most powerful around, detecting a galaxy 4.7 billion light-years away was “pushing the limits of what anyone’s actually tried with SOFIA,” Diamond-Stanic said. 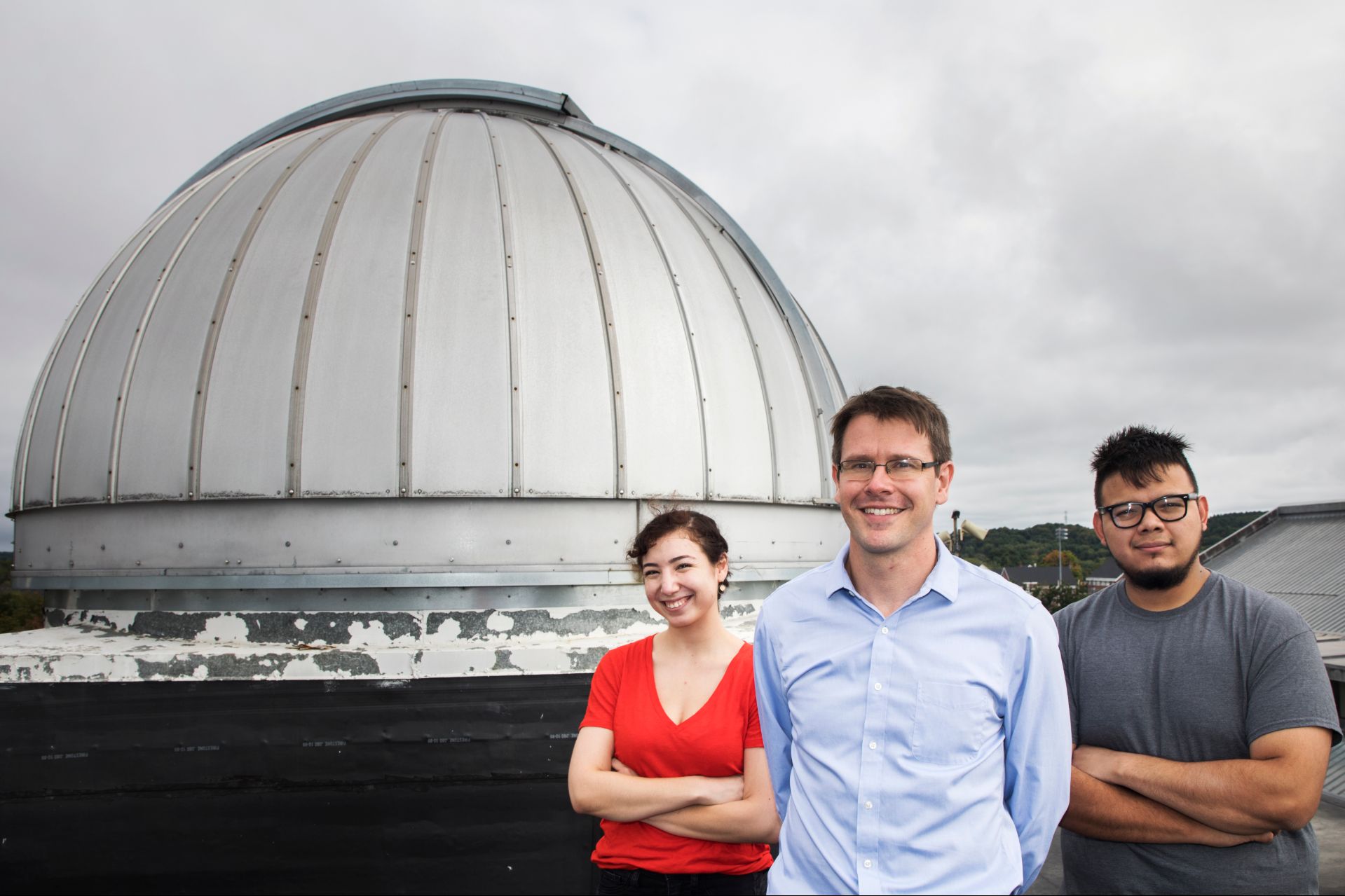 As the sun set, SOFIA flew from Palmdale over Los Angeles and off the coast. Over the next 10 hours, the plane crisscrossed the Pacific Ocean, turning whenever the telescope needed to point to a different part of the sky. Surrounded by computer monitors that display the data it collects, the telescope sticks out an open door near the back of the aircraft.

For the first few hours, the Bates team tried to catch up on schoolwork and listened to the chatter between the pilots and air traffic control and among the NASA scientists aboard. Then, midway through the flight, SOFIA turned northeast toward British Columbia so that the telescope pointed at Diamond-Stanic’s target galaxy.

Ruiz and Diamond-Stanic watched the monitors as the data came in, looking for any sign of the galaxy. Soon, a shape appeared. A technician drew a circle around it. Diamond-Stanic snapped a picture.

“That’s our galaxy!” he said. To a lay person, it looked like a white blob. But “it’s beautiful to me,” Diamond-Stanic said.

SOFIA will make a total of five observations of J1613+2834 over the next month. NASA scientists will then process the data, subtracting the infrared emissions of the sky near Earth so that the galaxy will be easier to observe. Diamond-Stanic, along with colleagues at several universities and students in his own lab, will further analyze the data. 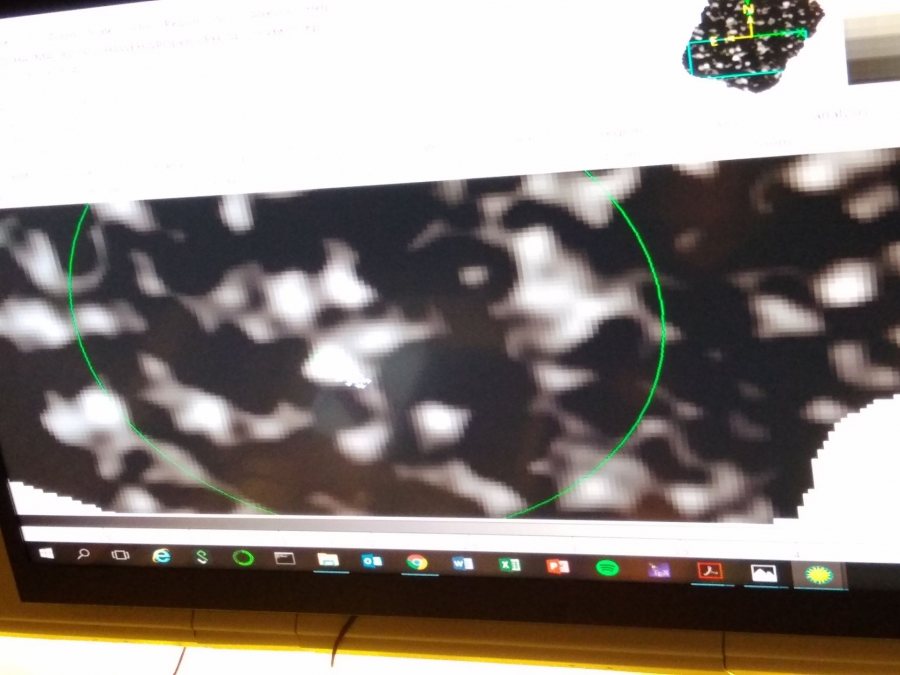 But in addition to collecting valuable data, Diamond-Stanic hopes the trip exposed his students to a “larger astronomical community.”

Minsley said that seeing the SOFIA data gave her a more comprehensive sense of how astronomers and astrophysicists gather information, whether it’s from the Hubble Space Telescope or a mountaintop observatory or 40,000 feet in the air.

“The coolest part was realizing the connection between all these other projects,” she says. “It’s like trying to collect puzzle pieces, or scraps of clues, to try and create a composite image of what’s really happening.”