My Maine Summer: Nicolas Lindholm ’86 and the wild blueberry harvest

At midday on a hot day in early August, pop music mixes with the whir of a custom-built winnower, the machine that separates a crop of freshly raked wild blueberries from the leaves and twigs and stems that got caught up in it.

Workers in shorts or overalls feed the blueberries into the machine and watch what comes out the other side, picking out any debris or mushy berries the winnower misses.

“What you’re getting is 100 percent cold, plump, ripe berries,” Nicolas Lindholm ’86 says, stepping away from the winnowing room to a quieter spot overlooking his family’s sheep pen and vegetable garden, several acres of blueberry fields, and, beyond, the inclines of the Blue Hill Peninsula in Downeast Maine.

Lindholm and his wife, Ruth Fiske, have run the Blue Hill Berry Co. — “Maine’s Finest Organic Wild Blueberries,” reads a sign on their barn — since the late 1990s. The vast majority of the blueberries they harvest each summer gets sold the same week or even the same day. The ones now going from field to winnower to retail container are bound for the Portland Farmers’ Market. 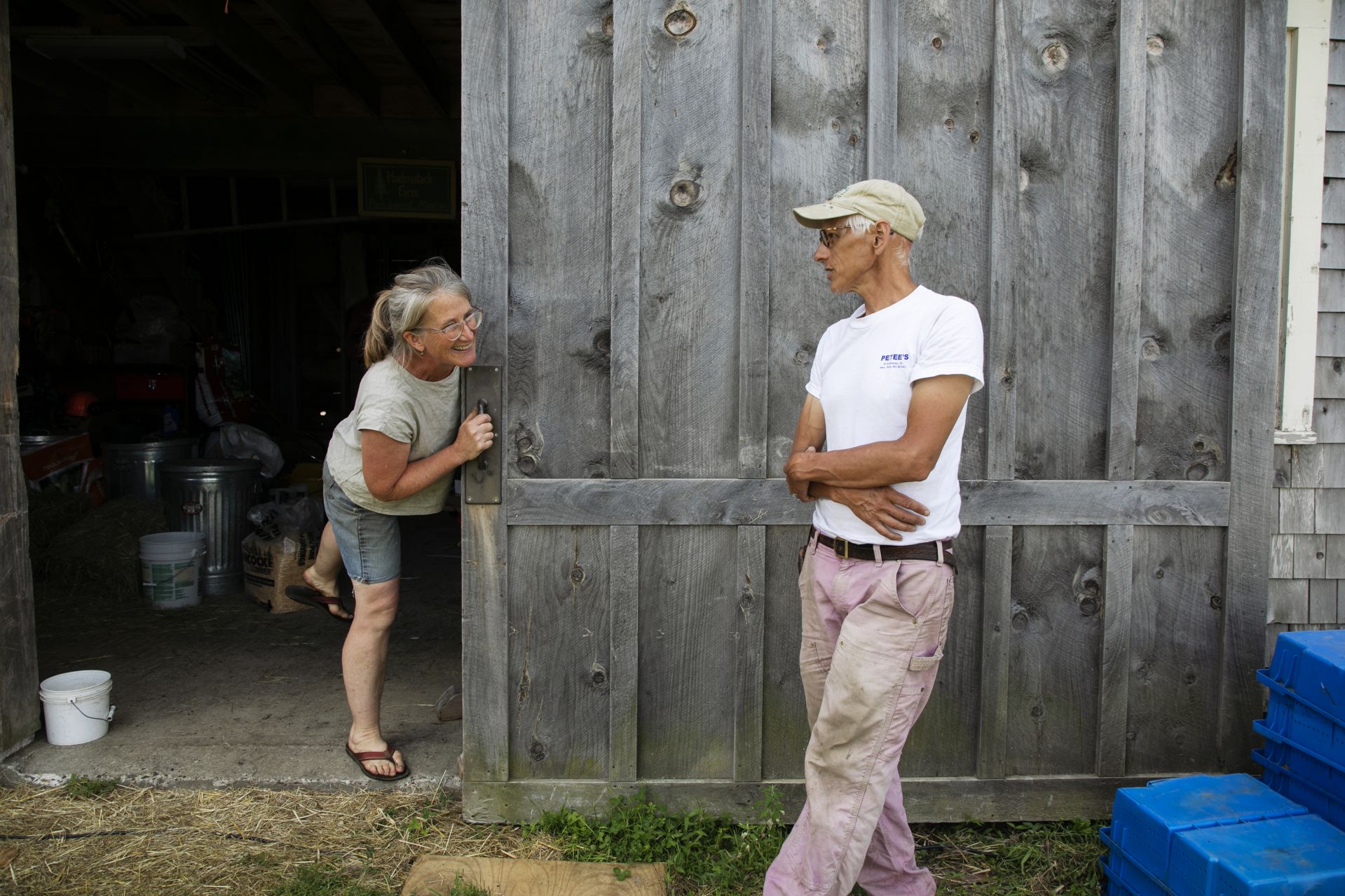 Nicolas Lindholm ’86 talks to his wife, Ruth Fiske, with whom he has run Blue Hill Berry Co. since the late 1990s. (Theophil Syslo/Bates College)

August is, of course, the height of the blueberry harvest season. Lindholm relishes the long days, the green lushness of the outdoors, and the extra hands, a 12- to 15-person crew including local teenagers and experienced farm workers from away, many of whom have been working for him for years.

“As a kid, summers were all about just doing nothing and having so much relaxation,” Lindholm says. “Now it’s a lot of responsibility, and a lot of work.

“I look forward to that.”

Lindholm got into wild blueberries, one of Maine’s few native crops, by accident. He grew up in Vermont with a mother who loved to antique, taking her young son to flea markets along Maine’s Route 1 in the summers. The beauty of the Blue Hill Peninsula stuck with him, and after graduating from Bates, he apprenticed in the area with an organic vegetable farmer.

In 1995, Lindholm and Fiske were ready to buy land, hoping to start their own organic vegetable farm on the peninsula. The best tract they could find was 52 acres half-covered in wild blueberries, “which I knew nothing about,” Lindholm says.

It’s a common misconception — one this reporter has just voiced to Lindholm — that wild blueberries are already organic, given that they have “wild” in the name. Not so, Lindholm says. Wild blueberries can and do grow on their own in forests, but large-scale farming in fields requires careful management, made all the more difficult without the herbicides, pesticides, and synthetic fertilizers available to non-organic farmers. (Wild blues are also known as low-bush, whereas most commercial blueberries are high-bush.) 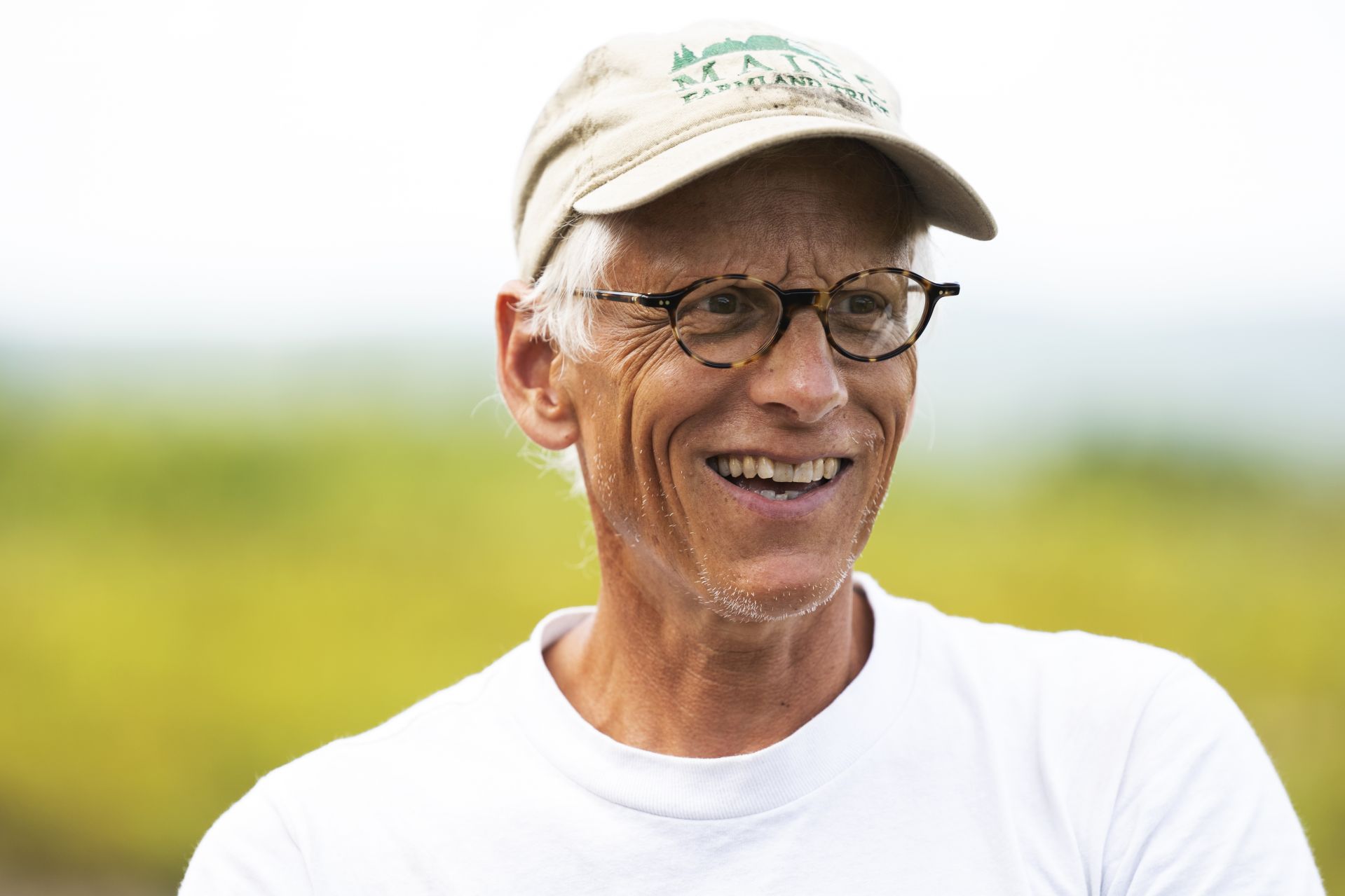 With the creep of climate change and the lack of typical fertilizers and pesticides, organic blueberry farming is a finicky business, says Nicolas Lindholm ’86. But it’s a highly rewarding one. (Theophil Syslo/Bates College)

Some of the people Lindholm and Fiske sought out for advice told them to just plow up the blueberries and grow something else. This was 25 years ago, when there wasn’t a ton of local knowledge about organic wild blueberry growing, and the University of Maine Cooperative Extension didn’t know too much either.

But Lindholm and Fiske gave it a shot and found they were part of a community of small organic wild blueberry farmers. Within a few years, the U.S. Department of Agriculture was funding research into growing organic berries, spurring cooperative extensions to help.

“They found there was a growing number of farmers and consumers wanting this,” Lindholm says. The support, combined with his and Fiske’s own hard work and marketing, helped Blue Hill Berry Co. thrive.

Now, Lindholm and Fiske own or lease 70 acres of wild blueberry fields. The berries grow on a two-year cycle, so they can harvest about half that acreage each year. It’s not an entire living — Lindholm also works as a carpenter and Fiske in a school — but thanks to individual buyers, farmers’ markets, and farm shares, almost every berry is spoken for upon harvest. They’ve also been able to expand into shipping frozen berries and smoothie-friendly berry powder.

On the farm, the winnowing winds down. The best berries are packaged for the farmers’ market, and the ones that didn’t make the cut — mushy ones, green ones — are set aside for composting or to sell to a local winemaker. 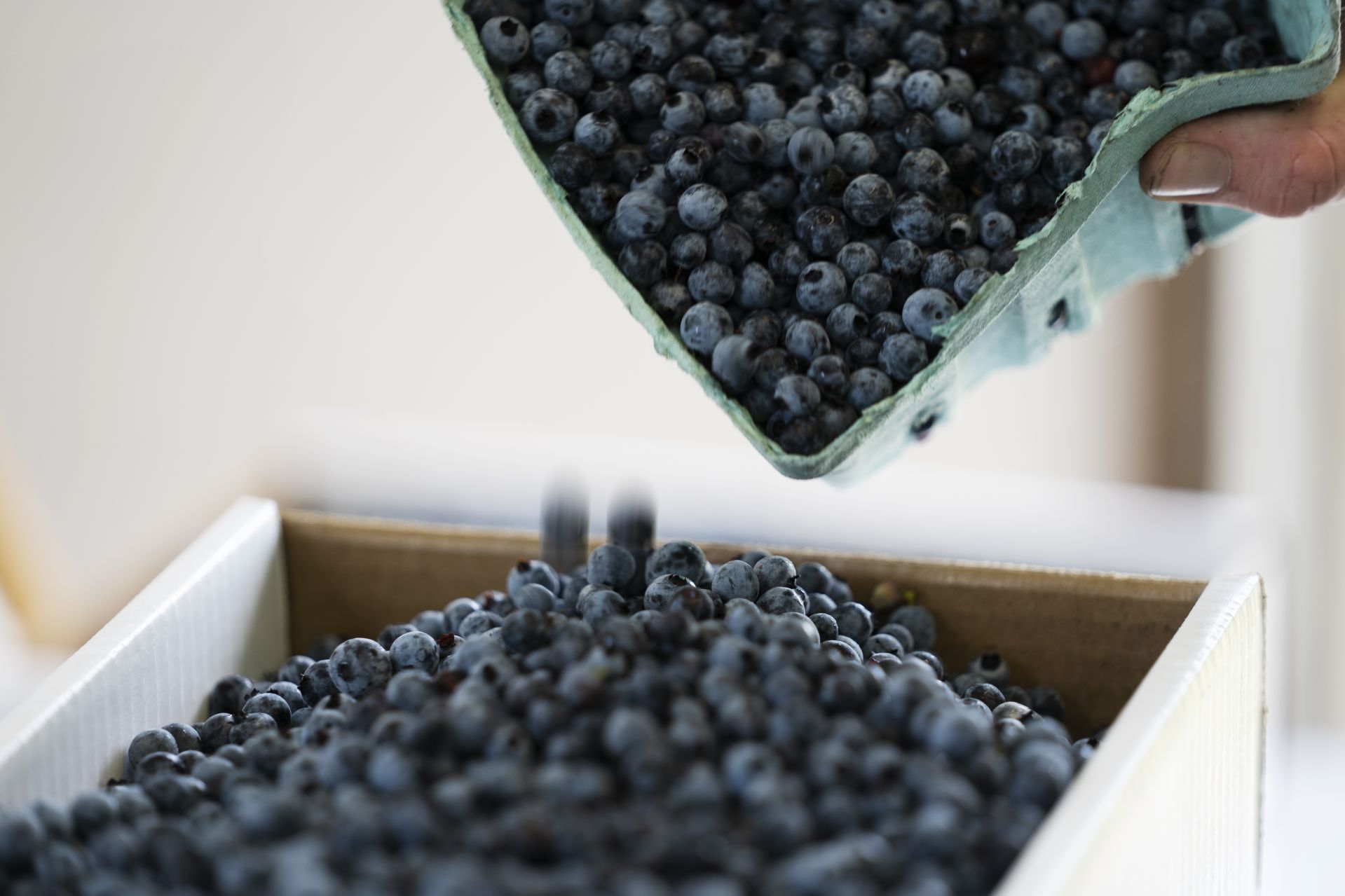 Organic wild blueberries are highly diverse, says Nicolas Lindholm ’86. “Out of 10 blueberries, there will be almost 10 different colors and sizes. The flavors are just amazing and complex — some are sweeter; some are more rich and fruity; some are tart.” (Theophil Syslo/Bates College)

But the day isn’t over. The crew starts getting ready for the afternoon harvest, loading dozens of small rectangular totes, the boxes where they’ll put the blueberries initially, into Lindholm’s pickup truck. One of Lindholm and Fiske’s dogs, little Pip, looks for attention underfoot, while their other dog, big Obie, occasionally ambles over.

This afternoon’s field, which belongs to a friend who’s selling Lindholm and Fiske the berries they can harvest, is half an hour north in Stockton Springs. Once Lindholm’s truck pulls up the long dirt path, the crew hops out with the totes and the handheld rakes that are used to gently pull the berries from their shrubs. They’ll work in rows demarcated by white string.

Right after the harvest — and mostly by themselves, once the crew leaves — Fiske and Lindholm will prune the plants by mowing or burning them, then let them regrow for a year for the 2021 harvest.

By next spring, they’ll have turned their attention to the other half of their fields. In May they rent honeybees to pollinate the blooming blueberry plants, and then spend the first part of the summer managing the crop and beating back the weeds. Then they’ll set up the winnower, hire the crew, and the harvest will begin again.

Like any farming venture, it’s a finicky business. Lindholm has always had to monitor closely things like soil acidity and insect levels, but more recently climate change has thrown a wrench into things. 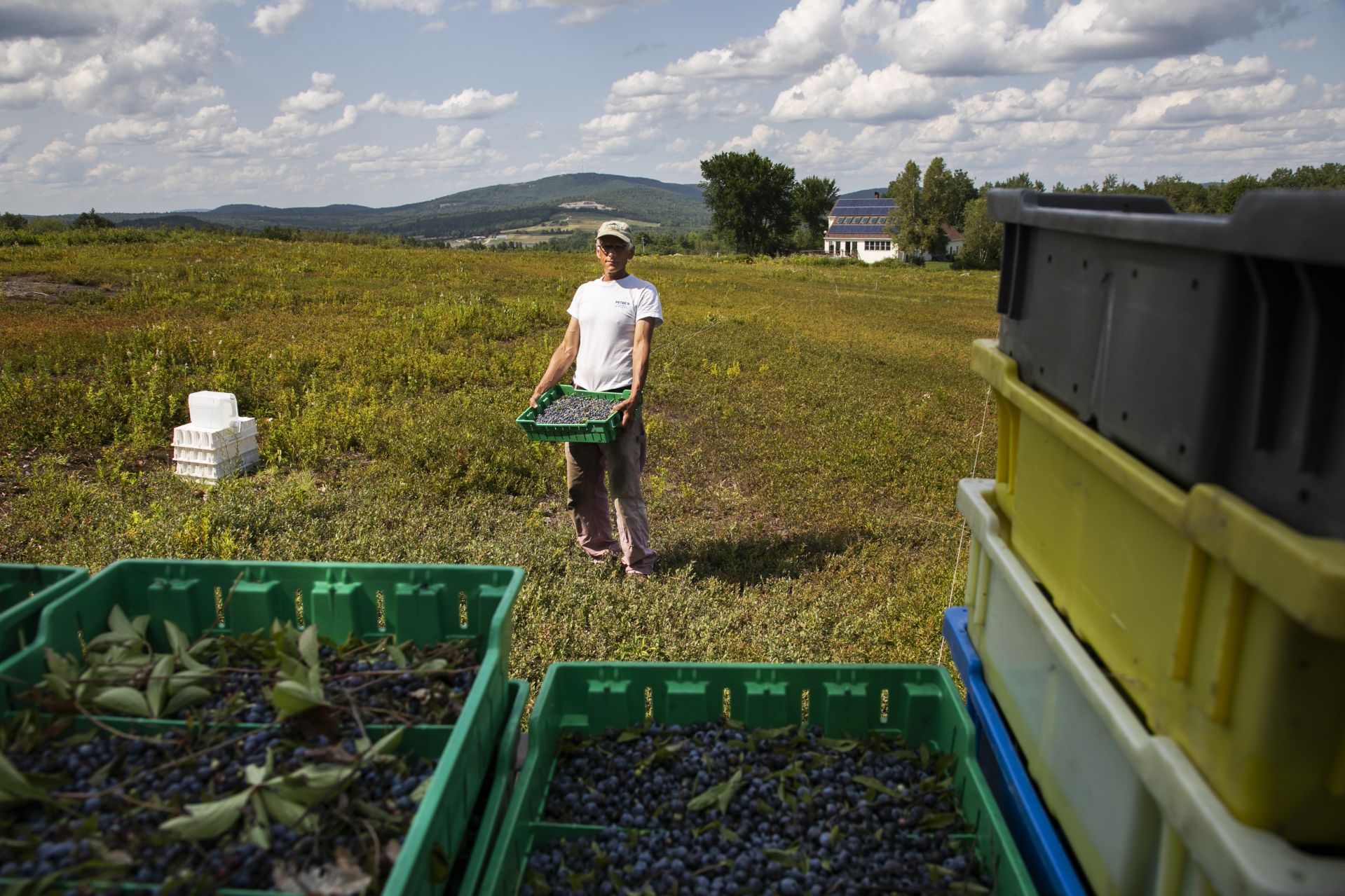 Nick Lindholm ’86 poses in a blueberry field with a tote, a box where raked-up berries go before they’re winnowed and packaged. (Theophil Syslo/Bates College)

“There’s no norm anymore,” he says. “This year was late. It was cold and rainy, but the three summers past it’s been very dry and hot. Your first frost in the fall and your last frost in the spring are getting further and further apart, so we’re getting a longer growing season. That plays tricks — especially on native perennial crops, which are used to having constant conditions.”

But constant change is what makes organic wild blueberries so great in the first place. They’re highly genetically diverse, coming in a wide variety of shapes, sizes, and colors. That’s key to organic blueberry growing — genetic diversity keeps the plants healthy and less susceptible overall to weeds and pests.

“Each year it’s like opening up a whole new unknown.”