A few years ago, Jay McGowen came to his daughter, Kate McGowen Wing ’01, with an idea: buy an old lobster boat off his friend, fix it up, and let him give demonstration tours around the world-famous lobster waters off Harpswell, Maine.

Wing and her family have deep ties to the area. Jay McGowen grew up fishing and lobstering before becoming a marine engineer. The family lived in Florida during the school year but spent every summer on the Maine coast, where Wing explored tidepools and the undersides of stones and rode around in her friends’ skiffs.

Her sole employee is her father, Capt. Jay, who entertains audiences with his vast knowledge of lobstering, all the while pulling up lobster traps, describing the crustaceans inside and then throwing them back. 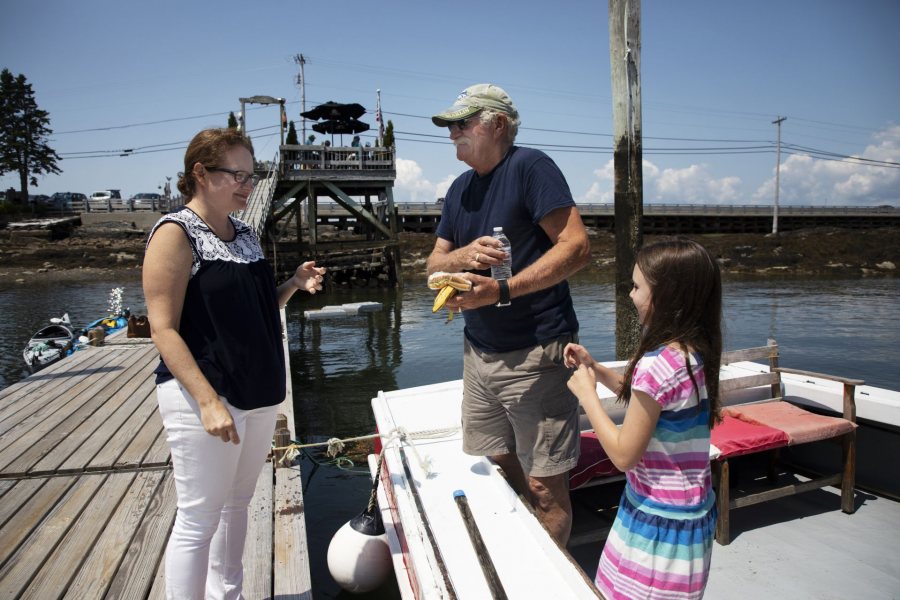 In creating a thriving summer business in a place so full of childhood memories, Wing has witnessed the ecological and economic changes that are making Casco Bay a very different place.

What point in the year has summer begun, and when is it over?

July 1 is when I realize summer is really here. I don’t know about summer ending, but you can smell the fall coming. It’s very distinctive, and the light looks a little bit different. That’s probably somewhere around the beginning of September.

What are your childhood memories of Maine summers?

When I was little, moving from Florida to Maine for the summer, it would be a four-day car ride in a minivan with the dog and my parents. My dad had a specific limit of how many hours he liked to drive per day, so there was no slamming through it. We used that as an opportunity to see a lot of the East Coast.

I spent lots of time in tidepools, looking at sea creatures, and looking under rocks and finding crabs and lobsters and eels and sea urchins. I remember lobster bakes down on the rocks, and sitting on the porch and looking out at the water for hours.

My very favorite memory — and I still kind of get teary sometimes doing it — is crossing into Maine over the Piscatacqua River bridge. It’s still an emotional thing to come home to.

Did you spend summers in Maine during your Bates years?

I spent every summer in Maine. I did all my abroad opportunities during the academic year. Even now, as a family, we don’t vacation in the summer in places other than Maine because Maine is too beautiful in the summer.

I was a server at Cook’s Lobster House on Bailey Island for seven summers through high school and college and graduate school. I made excellent money there, which is why I stuck with it. That was where I learned great customer service, and an extreme tolerance for summer tourists.

I still have nightmares of forgetting somebody’s ketchup or dumping a cup of lobster butter down their front, which does happen. When I think about it during the day, it’s mostly fond memories of meeting a lot of really cool people from all different walks of life.

During the year you’re a librarian at Bowdoin. How do the two jobs compare?

The lobster tour business is more of an organizational job, whereas my librarian job is more intellectual and big-picture. This job has a way things are done, and there are finite changes, but it largely remains the same. My librarian job changes daily. 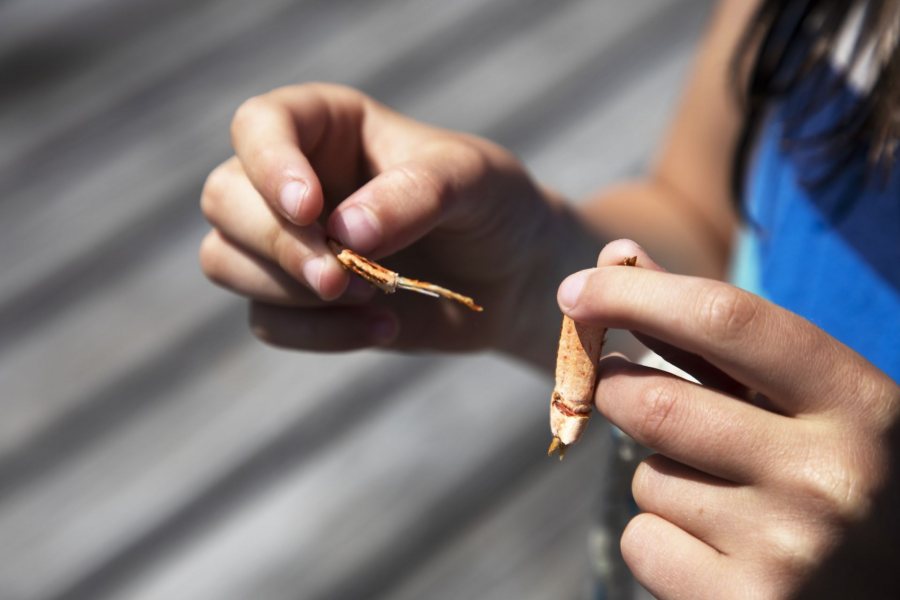 Around April, I start looking at the West Wind tours website and making sure the information is still accurate, thinking about any pricing changes, or simplifying the tours. We have the maintenance schedule in June of getting the boat ready to go in the water, June through September tours, and then hauling the boat out. The summer is extremely busy, and the winter is very dead.

What’s your favorite part of running the business?

The happy people and the good reviews and the emails they send me afterward saying that it was the highlight of their vacation, that their kids just loved Capt. Jay. It’s really great to hear those things about your own father, that he’s a great storyteller.

Do you remember the first time you went on one of his tours?

I learned a whole lot I didn’t know before about lobster mating and lobster anatomy and physiology — how lobsters pee out of their eye sockets and all sorts of things. I knew one way to tell males from females, but it turns out there are a couple more ways that I didn’t know.

I was out with my dad recently baiting the traps. We were looking at the bottom, and he showed me these ledges which run northeast to southwest in Casco Bay. They look like fingers. His grandfather had taught him that you should put your traps in the deep little holes between the fingers.

Those little tiny areas are apparently what the lobsters really like. Then we hauled up a trap, and there were 10 lobsters in it. The amount of knowledge is unbelievable.

You have an 8-year-old daughter. Is she getting boating experience?

I spent most of my childhood on boats, but I didn’t know how to run a motorboat. Instead, I went to sailing camp. I really prefer power boats, and yet here I am at age 40 learning how to run a lobster boat!

I’m learning those skills now, but my daughter Tessa is learning them at age 8. She has her own 10-trap student lobstering license. My dad built her a 16-foot skiff, all of her lobster traps, and she has light purple buoys. We go out and haul her traps by hand, without any of the mechanical equipment like hydraulic haulers. 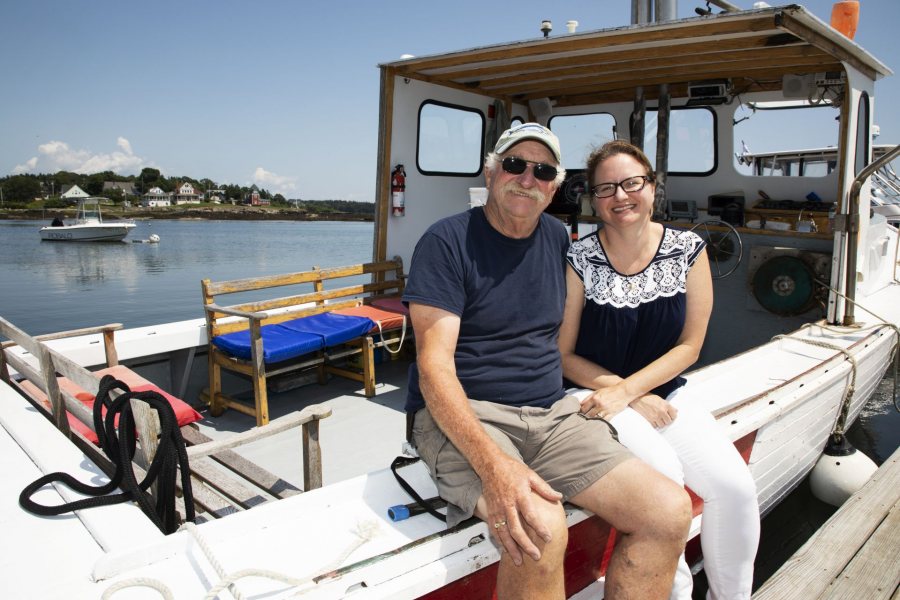 It’s hard work, but she’s old enough and has the right license that she can sell her lobsters. She’s learning how to run the boat and steer and bring her buoys over the side. She can buy equipment when she gets older, if she earns enough doing it the old-fashioned way.

When she is a teenager, she’ll be able to choose whether she wants to earn money lobstering, where she’ll be done by 1 p.m. every day, or if she wants to go work in restaurants and work 12-hour double shifts like I did.

Everyone gets worried when their kids are around the water. We’re trying to fight back those feelings of worry and anxiety, and teach her the skills she needs so she can enjoy being out there and be safe.

Have you noticed changes in Maine summers?

Definitely. We now have an invasive crab species that we did not have when I was younger. It used to be that you would lift up rocks and it would be just masses of green crabs under there, and now there aren’t as many crabs, and a lot of the ones that are left are Asian shore crabs.

It also used to be that we had tons of sea urchins and starfish, and now we don’t anymore. For the most part, I think the sea urchins were overfished in our area, and that might be why they’re gone.

Over the years we’ve had some people move into our community and knock down smaller houses and build really big ones and try to close off public access to our waterfronts. That’s been really frustrating to try to fight.

We’re also seeing some of what my parents and I think are extremely high tides. We can’t remember the water ever being as high as it is now. 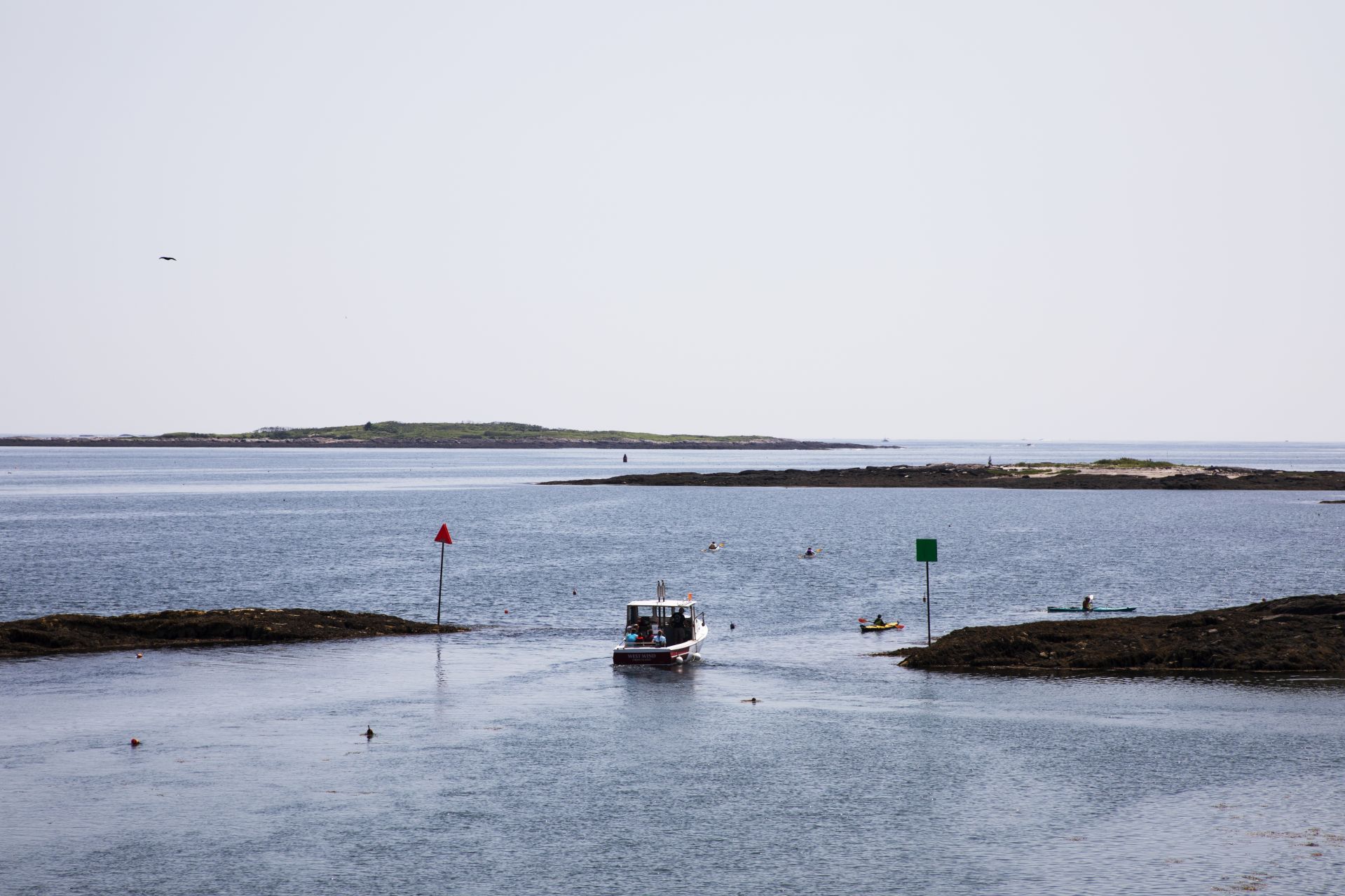 Capt. Jay McGowen steers the boat for open water at the start of a lobstering demonstration tour at Bailey Island. (Theophil Syslo/Bates College)

What should tourists coming to Casco Bay know?

A lot of our locals who have had homes for generations can’t afford to live in their homes anymore, because the taxes keep going higher and higher. The housing situation is terrible. People are losing their homes because even if the home is paid for they can’t afford the upkeep and the taxes. Some of our fishermen are fishing from as far as Topsham or Richmond because that’s where they can afford to live.

My Maine Summer: Nicolas Lindholm ’86 and the wild blueberry harvest