An interview with Hugh Kenny, former Green Bikes Program coordinator and Bates College graduate, about his passion for biking, knowing landscapes, and the connections he’s made between bikes and sustainability.

Hugh runs the Green Bike Program, which allows students to check out bikes from Ladd Library in the same way that they check out books. Hugh plans logistics with library staff, promotes the program, fixes the Green Bikes, and makes sure everything is running smoothly.

K: Tell me about how you started working on the Green Bike at Bates.

I’m from New York City. I went to school in Brooklyn, but I’m from Manhattan, so that’s right in the middle of the city. I got into biking in high school when I got the idea to do a cross-country bike trip. I did the trip the summer between my junior and senior year of high school, and I just fell in love with biking. We started in Charleston and ended in Santa Monica and camped most of the time along the way. We rode 80 miles a day across the southern tier of the country for about six weeks, and it was beautiful. I saw regions and places I never would have otherwise gone. 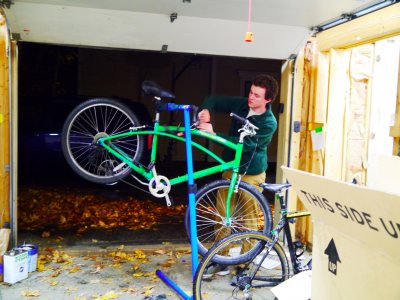 I used to be a runner, and I was on the Bates cross-country team. But I had recurring hamstring injuries, and I basically couldn’t run anymore. I left the team and picked up biking again as a form of exercise. It’s a great way to get out and see Lewiston and the surrounding areas in a different, self-powered way. There are a couple of us who ride on a team at Bates, and it’s just a rush. I really like going fast.

I saw the Green Bike Coordinator job listed on an announce email freshman year, and I liked the idea of working on bikes and getting paid for it. So, I applied for the job, got it, and I’ve been working on the Green Bikes ever since.

Traveling across the country, I could see how the different geographies morphed into each other. I became fascinated with places themselves, how they change and interact. For me, biking is first and foremost about being present in the places I’m riding through.

It’s an incredible way to experience place because, like hiking or walking or running, you’re doing it yourself, and you can get a real appreciation for terrain. When you’re driving in a car, you don’t really notice little inclines or bumps in the road. When you’re traveling by your own power, you do. Biking is especially cool because you can go for a fifty mile ride and see so many more places in the same region than if you were walking five or ten miles in the same time.
K: I’ve never thought about it that way. It gives you a more tangible connection to the landscape than you ever would have had otherwise. Living in New York City, do you feel like you can still get that connection to the land in the city?

Yes, but not to the natural landscape. There’s not really any of the natural landscape left in New York. There’s central park, but that’s actually just another kind of built landscape. I do bike around the city a lot, though. And when I do I’m not seeing trees, or animals, or views, but on a bike I still definitely get a better sense of the way the city works and flows. If you take the subway, you head underground and twenty minutes later pop-up in an entirely different part of the city. You don’t really have a conception of how far you’ve travelled or what was in-between where you started and where you’ve arrived.

K: Part of your job as Green Bike Coordinator is fixing bikes. Do you like doing that? 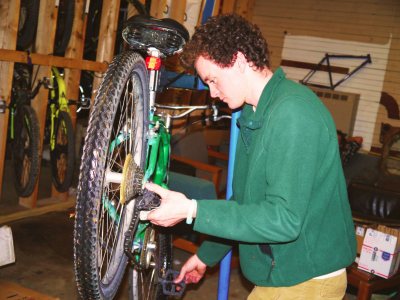 Yeah, I do. I’ve kind of taught myself the skill as I’ve had problems with my own bikes. I’ve gotten better over the years, and now I feel confident that, for the most part, I can deal with any problem that pops up. That feels good.

I’m a big fan of bikes themselves. I’m a huge bike nerd. I love the machines and their aesthetics and how they work. If there’s a problem with my bike that I can’t fix and I bring it into the shop, that’s definitely not as good of a feeling as if I had fixed it myself. When I can fix the problem myself, I sort of feel a connection to the bike.

K: That’s kind of a cool metaphor for the kind of sustainability you’ve been talking about.

You’re propelling yourself across a landscape that you’re getting to know much better than you would otherwise, and you also have all of the tools to fix the vehicle that’s moving you.

I’m interested in biking and sustainability both together and separately. Independent of the activity’s energy saving nature, I just like biking for the sake of biking. At the same time, I’m an environmental studies major, and I’m really interested in environmental issues. At Bates, I study the politics and economics of environmental issues more than the science or conservation, but the two perspectives really go hand-in-hand and I can work on that tangibly through the Green Bike Program.