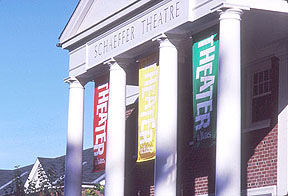 Theater at Bates has had an important place in the college’s life. Early in the College’s history, annual productions of Shakespearean or Greek drama by students, faculty, and townspeople provided a major cultural experience for the community. In the late nineteenth century, students ventured off campus to present plays in Lewiston’s Empire Theater and Music Hall.

In 1896 Grosvenor May Robinson (1867-1953) joined the faculty to teach Elocution. “Prof. Rob” oversaw the annual Greek plays staged in front of Coram Hall at Commencement, founded the 4-A Players in 1921, and directed the college’s Little Theatre. A nation-wide phenomenon, the Little Theatre Movement was, according to the 1923 Bates Student, “a direct answer to an urgent demand for artistic and worthwhile drama. At first a mere protest against commercialism in the theatre, it has become a dominant educational factor in our cultural life.” Professor Robinson organized tours by the College’s theater productions to distant Maine communities.

The Spoffard Literary Club and the Phil-Hellenic Club supported the arts and sponsored the production of plays written in Professor A. Craig Baird’s English 4A. The course was modeled on George Pierce Baker’s pioneering class in playwriting at Harvard, English 47A (1913). Professor “Birdie” Baird (1883-1979), was a student of Brander Matthews, the first professor of drama in America at Columbia (1902).

In the fall of 1932 Owen Dodson (1914-1983) entered Bates college as a first-year student assigned to Roger Williams Hall. Encouraged by Prof. Rob, Owen Dodson directed one-act plays, wrote others, acted, and, as a senior, staged the annual Greek play, The Trojan Women. He graduated from Bates in the class of ’36, attended the Yale School of Drama, and went on to become one of Bates’ most famous contributors to the world theater as playwright, director, poet, and educator.

In 1938 Professor Robinson retired and the 4-A Players honored him by renaming the group The Robinson Players. The year also marked the establishment of the new Department of Speech which housed the College’s theater and drama curriculum. Paradoxically, the 1930s — the Depression years — marked a national surge in creating university and college theatre courses. During this period university and college theater programs were largely extensions of one dominant personality — Baker at Harvard and Yale, A.C. Drummond at Cornell, Thomas Wood Stevens at Carnegie Tech, Frederick Koch at North Carolina, and Lavinia Schaeffer (1903-1978), a graduate of Northwestern University, at Bates College. Until the opening of the Schaeffer Theater in 1960, plays were staged in the Little Theater located on the second floor of Hathorn Hall.

In the fall of 1936, Ms. Margaret Fahrenholz, Bates’ assistant athletic director, gathered 15 -20 young women to form the Bates College Dance Club to study and practice the theories and techniques of Doris Humphrey, Charles Weidman, and Hanya Holm. Beside performing, the club sponsored films of modern dance performances. In 1949 the club added men. Dance at Bates moved into the curriculum with the arrival of Marcy Plavin, a student of Hanya Holm, in 1965. In 1971 she was officially listed as an Instructor of Dance. In 1973 courses in dance were listed in the Bates catalog for the first time.