“Dance” is the word that members of the Bonney Science Center construction team like to use when they’re discussing the complex logistics of sustaining the building’s progress.

An example of that complexity was scheduled for this week, as technicians for the Finnish elevator manufacturer KONE were expected to start installing Bonney’s lift. The elevator won’t go into service until sometime next spring — but it needs to be installed now because progress on other fronts depends on it. Assembling the elevator could take up to a month.

It’s quite a two-step: Before drywall installers and painters can finish their work, Bates project manager Chris Streifel explains, elevator doorframes and other components need to be in place. “That’s quite a bit of work when you’ve got five stops,” one of them being on the first floor, where the elevator will be able to open toward either the public lobby or service areas at the back of the building. 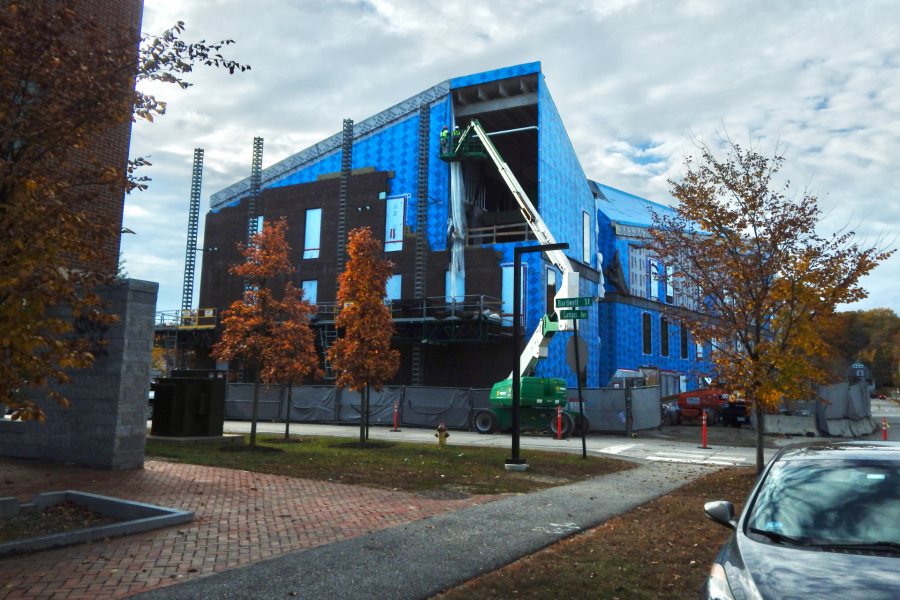 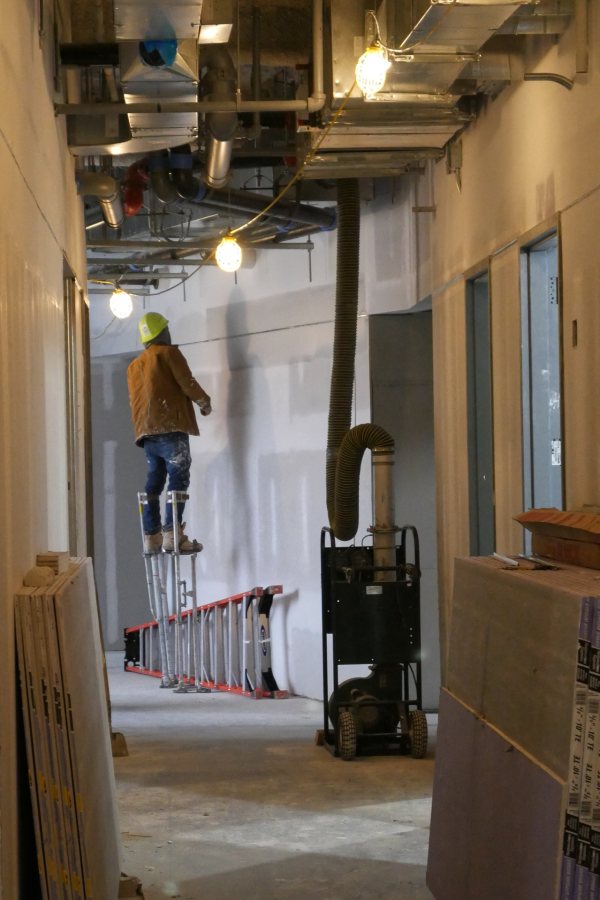 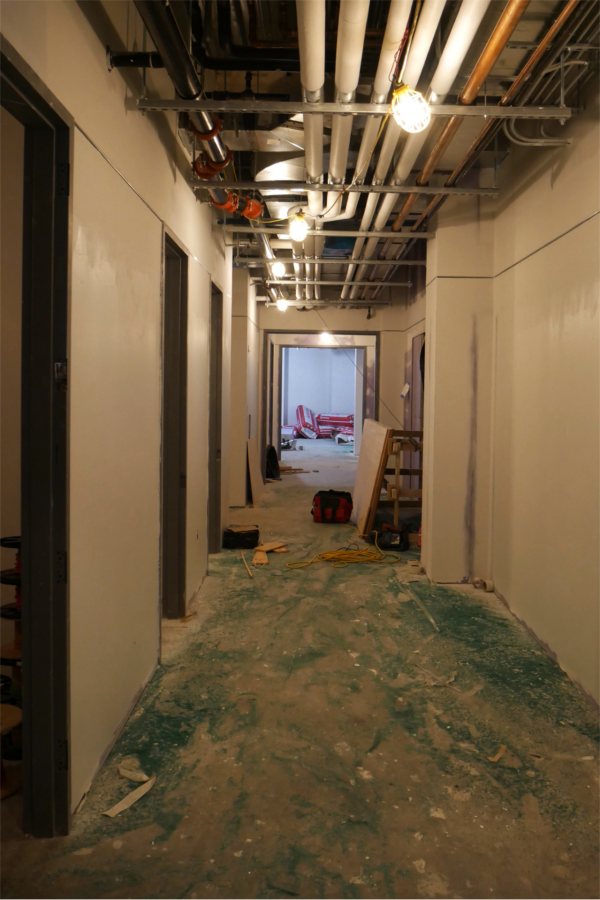 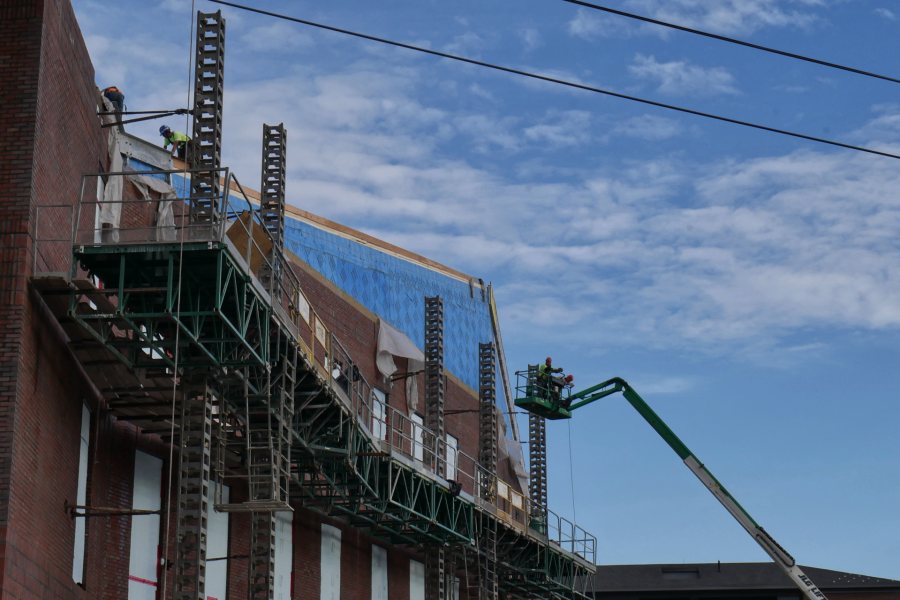 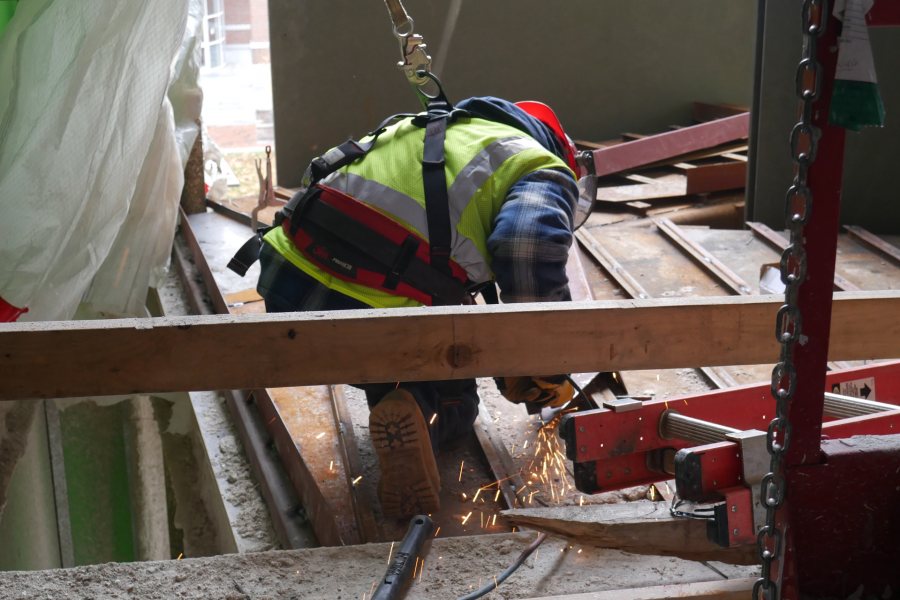 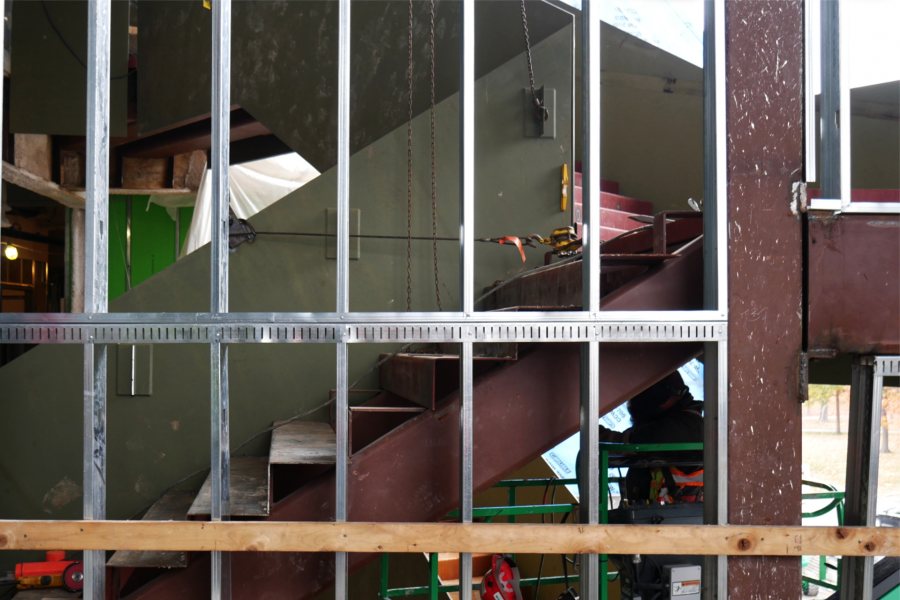 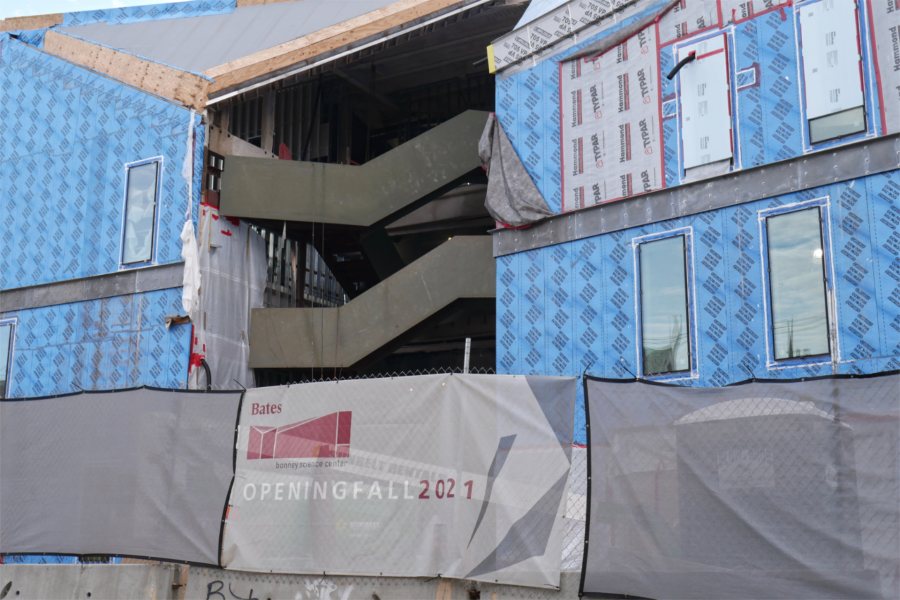 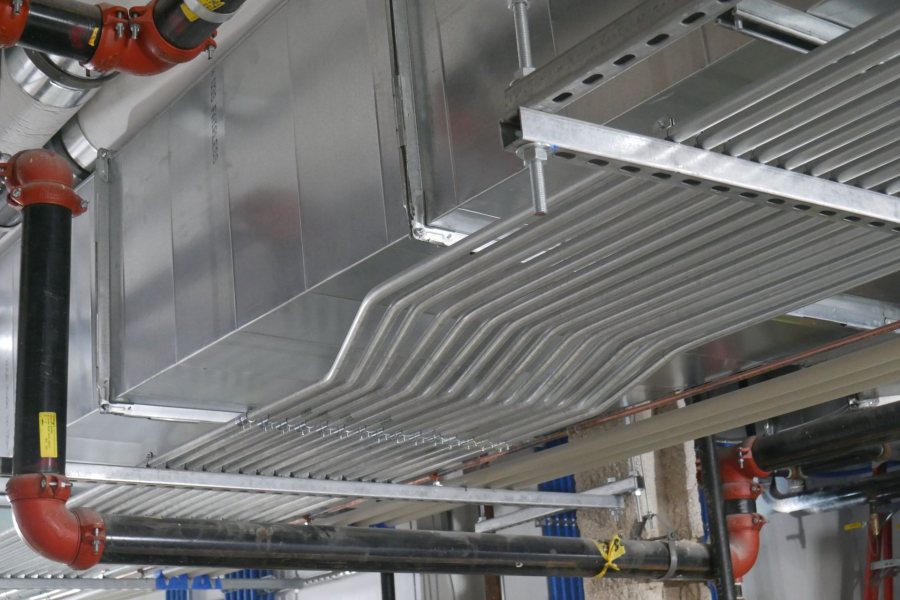 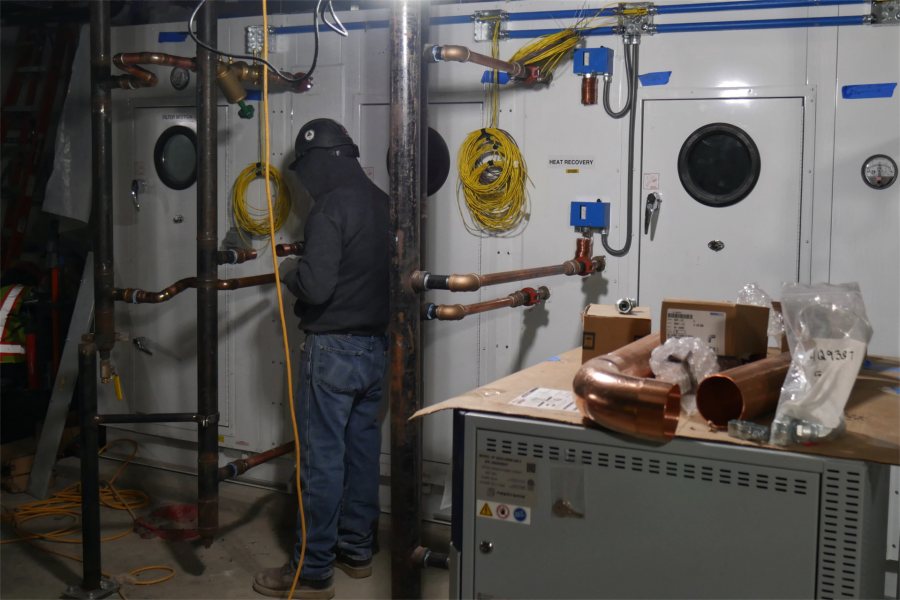 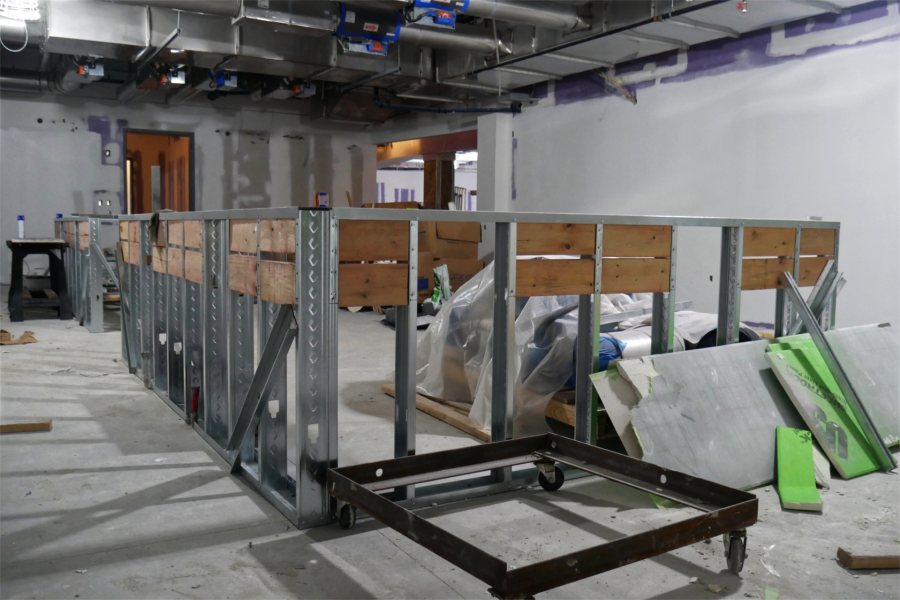 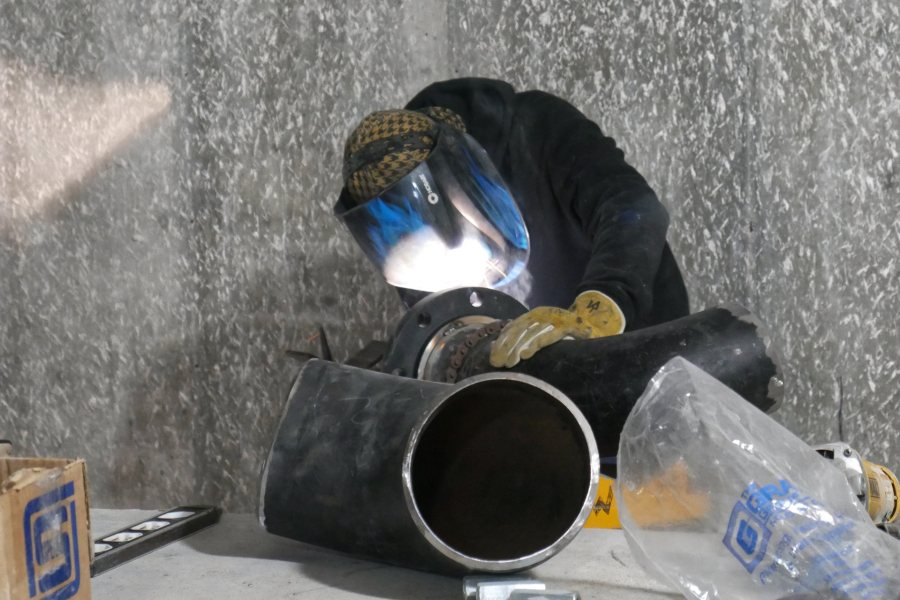 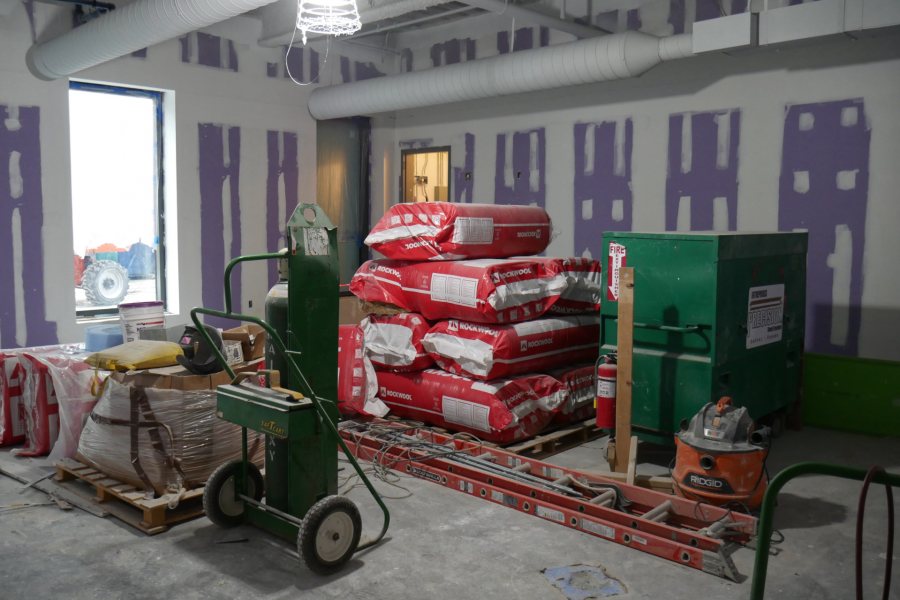 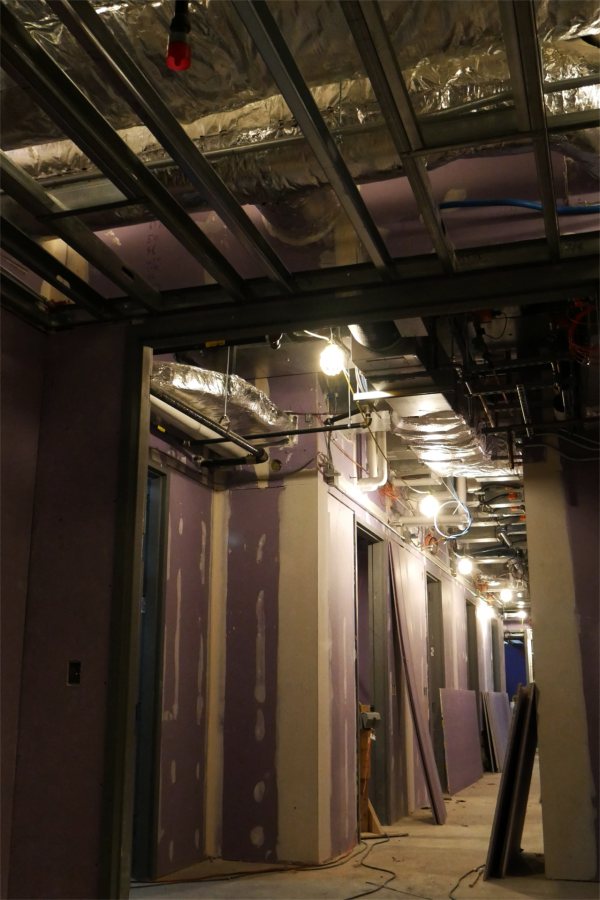 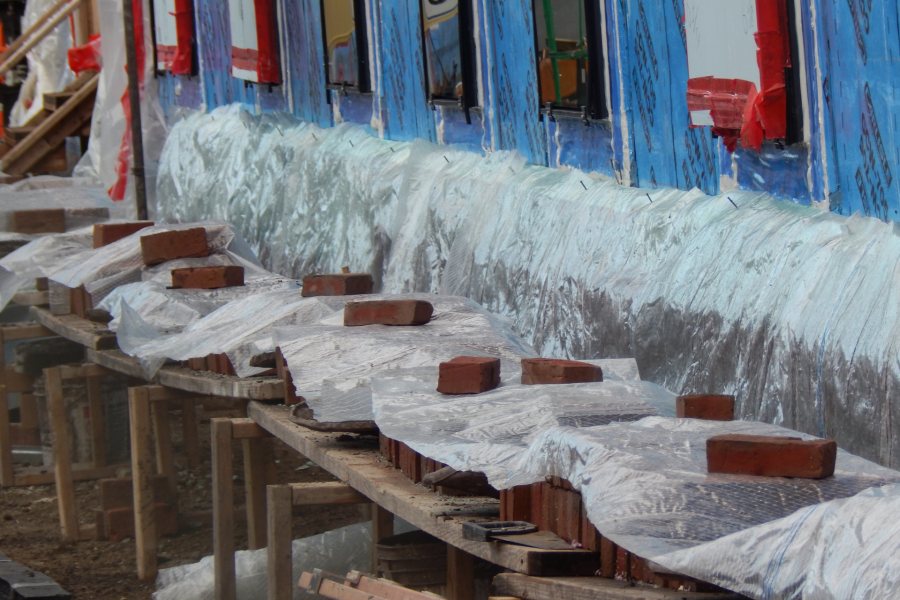 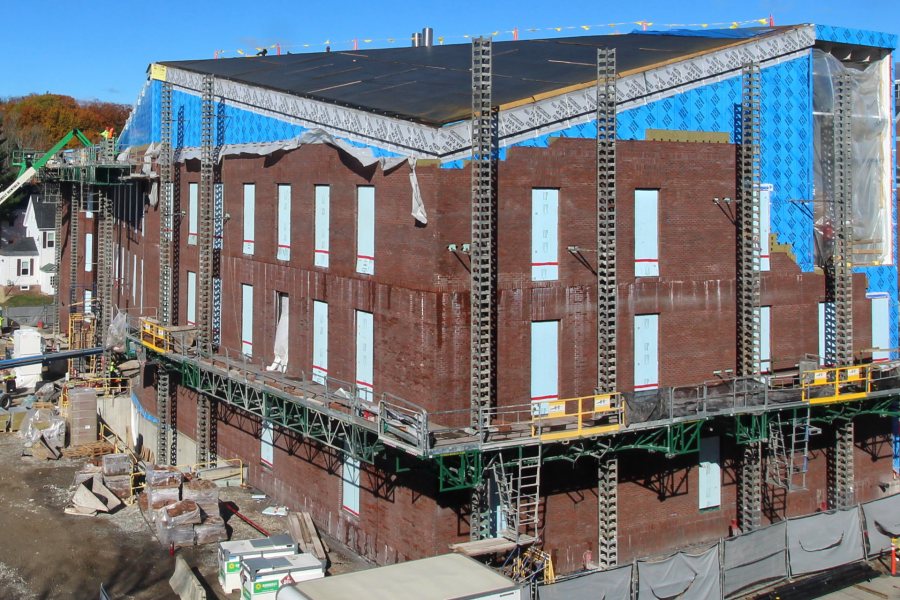 Another do-si-do in the Bonney dance involves the strip of construction site adjacent to Campus Avenue. While bricklayers working for Maine Masonry have all but finished the east, south, and west sides of the building, that north side will have to wait (despite a few bricks that have been deceptively staged there in order to throw Campus Construction Update off the trail).

That’s because the local firm Gendron & Gendron, subcontractor for Bonney project site work, has begun implanting catch basins and other drainage features on that side, Streifel says. “Then there will be some foundation walls and slabs for the entrance,” he adds — concrete pads that underlie the finished approaches to the building. That will firm things up underfoot for accessing the science center.

After the north side, “they’ll move around the building and do that at all the entrances,” with the Nichols Street side next in line. Hopefully by that point, the coast will be clear to move the bricklayers and their Hydro-Mobile self-elevating staging around front, cha-cha-cha.

With the Bonney dance floor getting mighty crowded, as Van McCoy might have said, construction management firm Consigli Construction has also laid on an evening shift for certain trades — notably the painters, who work for Portland, Maine–based Van De Graaf Painting Co. The second shift began on Oct. 5, and since then, in fact, the painters have worked only that shift.

“That’s a pretty big move that’s going to benefit the project in a couple of ways,” says Streifel. “One of them being just more efficiency,” as some trades, like the painters, are more productive when “they can really spread out and not feel like people are coming across their work area constantly.

“And then, as we peak out on the number of people on site every day, to be able to give everybody some more distancing options is also a plus” from the standpoint of Consigli’s management of COVID safety protocols, Streifel adds. About 100 workers representing more than a dozen trades are on site these days, says Bates construction administrator Jacob Kendall.

Even before the second shift was laid on, by the way, long days and six-day weeks were common for workers on the Bonney project.

Getting back to the north side, a vertical framework is in place to support the curtain wall of the Beacon, one of the building’s two signature features facing Campus Avenue. Subcontractor Oakes & Parkhurst of Augusta, Maine, is cutting each of the 30 glass panels to fit its specific location, and that glass should appear within a few weeks. And it’ll be hard to miss: With each panel measuring about 44 by 102 inches, the curtain wall will be 47 feet tall and 22 wide.

So what’s the second big feature on the north wall? (Or third, if you count those occasions when we have the official 8-foot Campus Construction Update stepladder set up in the roadway.) That’s the so-called Monumental Stairs, and there’s news there, too, as all of the structural steel is now in place for this dramatic spiral stairway.

And this too will be the location of an eye-catching glass curtain wall. “That’ll be the last major opening to be closed in,” rendering the building virtually weathertight, says Streifel. He estimates completion of that glass work by early December.

The Bonney interior remains a buzzing beehive. Mechanical work still dominates the basement and fourth-floor penthouse, where a coming attraction is the placement of a rubber-like membrane floor in the open well that houses an air chiller and an emergency generator.

In between top and bottom, the heavy action is now on the second and third floors — the continuing drive to hang and prime drywall, rough in utilities, etc. Not that the first floor is a ghost town, but it’s somewhat quieter and different trades are heading in — cable pullers for phone and data, tilers, flooring installers, and others.

Fitness al fresco: Meanwhile, across campus from the science center, two short-term projects have come to fruition in recent weeks.

Even before the coronavirus pandemic lent a new importance to outdoor activities, the college has been interested in expanding its facilities on that front. And now Athletics, the B Well health program, and Facility Services have teamed up to build an al fresco fitness park on a grassy patch between Underhill Arena and the Wallach Tennis Center.

Boasting five types of exercise infrastructure, the $65,000 park was begun on Sept. 9 and completed Oct. 16. Looking ahead during the summer to the start of school, “we knew that indoor fitness and recreational spaces would be limited” because of COVID-related guidelines for social distancing, explains Scott Lehmann, assistant director of athletics for facilities and recreation.

“We wanted to promote outdoor physical fitness opportunities as a means to support student, faculty, and staff well-being, and take advantage of the outdoor resources that we have on campus.”

A company called ActionFit supplied the workout stations: Pull-up bars and pushup bars, both in assorted heights; parallel bars; and for jumping, a “log hop” station and a set of plyometric steps in three heights.

“I’ve been a big user” of such facilities elsewhere, says Lehmann.

The park is a stop on the college’s Bobcat Fitness Trail. Anchored at Merrill Gym, this mile-long loop includes the Lake Andrews path on its course across campus and features six designated sites for various exercise breaks. And the fitness trail, Lehmann adds, is part of a larger network that Athletics and the B Well campus wellness program have collaborated on.

While the park is open to individuals now, “we do hope to do some programming there in the warmer months,” such as classes to introduce the exercise stations to new users.

The park is paved with rubber tiles 2 inches thick and 20 inches square. These serve three objectives, explains Paul Farnsworth, the Facility Services project manager who oversaw the project. First, the shock-absorbent rubber reduces the risk of injury in case of a fall. Second, with a couple of the workout stations being suitable for folks with mobility impairments, the tiles are ADA-compliant.

Finally, there simply needed to be some sort of solid surface on the site. “We didn’t want the fitness park to turn into a mud pit,” Farnsworth notes, adding that a substantial drainage system underlies the park. (And revealing to Campus Construction Update a fundamental problem with our own fitness facilities.) St. Laurent & Sons Excavation of Lewiston did the site work.

Not far away from the fitness park, members of the Facility Services grounds crew spent a recent week fixing a longstanding problem along the walkway to Merrill Gym. Led by Mike Fox, the team widened a long gravel strip that borders the gym wall and is intended to break the momentum of water cascading off the roof during storms. Such features, called drip edges, curtail the erosion of adjoining grass and the splashing of runoff-borne grime onto the gym wall.

The original drip edge “wasn’t working correctly,” explains Fox. So the grounds crew widened it by two feet, for a total of eight, and rebuilt the end of the drip edge by the gym entrance. They also regraded and reseeded the grass between the drip edge and the path. “If there’s no grass there to hold the soil in place, it gets washed away,” says Fox.

The rebuilt terminus of the drip edge by the Merrill entry is worth a close look. Removing some used granite curbstones from the Bates storage center on Strawberry Avenue, Fox’s team used 30 linear feet of this hand-hewn stone to construct a retaining wall where the grass slopes down toward a catch basin.

“The granite pieces are 20 inches deep by 8 to 12 inches wide, and 9 feet long. So they’re huge pieces of stone,” Fox explains. “You only see 7 inches of it revealed, the other 13 inches is below grade, but that’s what’s holding up the end of the drip edge by the Merrill entry.” He adds that this is a pilot project for improving drip edges at buildings all across campus.

Can we talk? Campus Construction Update welcomes queries and comments about current, past, future, and aspirational construction at Bates. Write to dhubley@bates.edu, putting “Campus Construction” or “Shouldn’t that be spelled ‘drippage’?” in the subject line.