Greg Fitzgerald (’17) on a May evening in Berlin 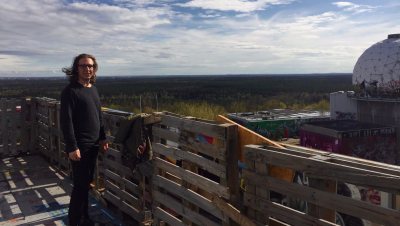 While abroad in Berlin during my junior year, I met a plethora of fascinating people, learned so much about Germany’s history and culture, and made some of my favorite memories to date.

This passage recounts one of those memories.

Thursday evening, Berlin. It’s the middle of May. It’s been raining off and on all day and the streets are half-dry. The clear cut gradient on the pavement reminds me vaguely of a Mark Rothko painting. I bike from my apartment in Kreuzberg to meet Oliver (my previous German host in the Fall Semester Abroad program) at his work in Wedding, winding my way through the city center and along the Spree river. The ride takes 40 minutes.

Together, Oliver and I head to a nearby park. The public ping-pong table is unoccupied. We play three rounds. Oliver wins his only two victories in our regular series of matches, but for now, Deutschland leads the scoreboard “zwei-eins.” Our friend Friedemann arrives. The three of us bike to a restaurant in Moabit. It’s an asian-fusion style restaurant. There, two more friends, Christiana and Rob, join us, running late as usual.

Dinner takes longer than expected. We pay and the five of us race through Charlottenburg. Biking in the city is best in groups. We arrive just in time, joining the convoy leaving Heerstraße train station on the western edge of the city. We descend a long, gradual street into the Grünewald forest. Quickly, our descent turns to ascent as we pedal up Teufelsberg (Devil’s Mountain), single file. Under our wheels rest the remnants of old Berlin, ruins of the Allied bombings at the end of the war. A beautiful mountain of rubble.

At the summit, we park our bikes and enter the complex. It’s marked by an old U.S. listening tower from the Cold War era, long since abandoned and left in its current state of disrepair. We enter the structure, welcomed by a table of refreshments–snacks, drinks, and most importantly, Club Mate, a Berlin staple. The sun disappears on the horizon and the film showing begins. Tonight’s feature is The Parallax View, a 1974 American political thriller and a fitting choice for our location. During the movie, wind sends ripples down the exposed screen.

It’s midnight now. The film just ended and we begin our descent. My bike lights stopped working earlier in the week, so I let the light from the other bikes guide me. We part ways at Heerstraße. I pedal to the U7 line and catch the last train to Kreuzberg. In the apartment, my host-mother is asleep. She has work in the morning. I creep into my room and fall asleep pondering the evening’s activities, glad to have made the most of such a unique opportunity. 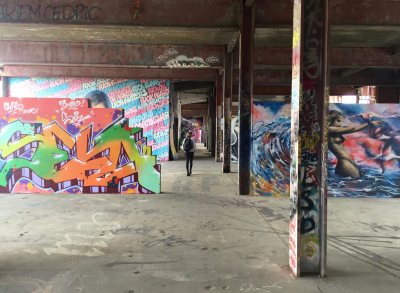 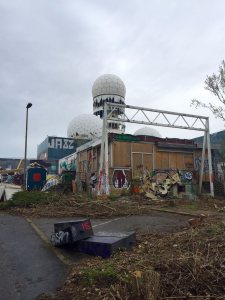