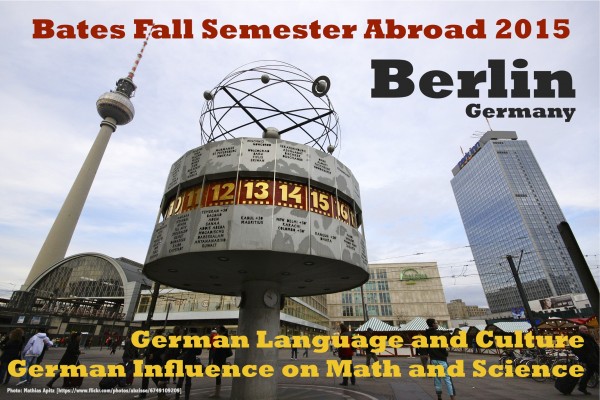 This program is part of the Bates curriculum. The Fall Semester in Berlin provides students with four Bates credits and a complete General Education Concentration (GEC).

About the Program
The program starts in late August and concludes in mid-December 2015. It begins with a four-week intensive German course taught by an experienced Berlin-based instructor. Students will be placed according to their abilities, from beginner to advanced. After this intensive course, participants continue their study of German.

Throughout the semester, students also take two courses with Bates faculty. These courses serve as co-requisites for each other. The course Mapping the City: The Urban Landscape as Text (with Prof. Jakub Kazecki and Prof. Raluca Cernahoschi, German and Russian Studies) satisfies the W1 or W2 writing requirement. The Culture, Controversy, Cryptography, Calculus (with Prof. Meredith Greer, Mathematics) course satisfies the Quantitative (Q) requirement.

About Berlin
The third most visited European capital, Berlin has a unique power to captivate. A meeting point of past and present, it offers a large number of sites that played an important role in world history, as well as a vibrant and diverse contemporary culture. Germany’s imperial aspirations are still visible in the city’s architecture and reflect the rise of one of the most important political and intellectual powers in Europe in the 18th and 19th centuries. Discoveries and innovations made in Berlin, the home of two world-class universities and many research institutes, profoundly affected mathematics and science and changed culture and politics well beyond German borders.

Berlin is also a perfect illustration of the tragic course of the 20th century: the rise of totalitarian regimes, two world wars, and the post-World War II division not only of the city, but also of the country and the continent. Since the fall of the Berlin Wall and German re-unification, Berlin’s rapid development made it again a symbol for the changes that ushered in a New Europe.

Today, the capital of Europe’s largest economy reinvents itself as the young, energetic, and cosmopolitan center of Europe. Yet Berlin’s location in the eastern part of Germany, in close proximity to the Polish border, also creates the opportunity to explore the multicultural landscape of the region, trace Germany’s changing borders over time, and observe the systemic and social transition of the former communist countries, such as the German Democratic Republic and Poland, after 1989.

The Fall Semester in Berlin program offers students the opportunity to live in and enjoy this exceptional city. Through this experience and program courses, students will deepen their understanding of European history, immerse themselves in German culture, including Germany’s contribution to mathematics and science, and enhance their proficiency in the German language.

Program Fees and Application
The program is open to all Bates students, including entering students and sophomores. No prior study or knowledge of German is necessary for participation.

All expenses, including travel to and from Berlin and program-related field trips, as well as food and cultural expenses, are covered by the regular Bates Single Fee. Students need bring funds only for personal entertainment and independent travel.

The applications are available at https://sites.google.com/site/batesinberlin2015/forms/application 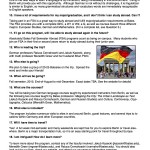 Completed applications from enrolled students should be submitted by December 12, 2014 (for early decision) or by February 6, 2015 (final deadline). Students in the class of 2019 should contact one of the organizers as early as possible and submit a completed application by May 11, 2015.

Any inquiries about the Fall Semester in Berlin should be directed to the faculty organizers (curricular questions) or to Dr. Stephen W. Sawyer, the Director of Off-Campus Study Office (administrative questions).

Read more about the Fall Semester in Berlin on the program’s webpage: https://sites.google.com/site/batesinberlin2015/

Bates students are able to take advantage of a number of opportunities to study off-campus: Read more about study abroad opportunities on Off-Campus Study webpage.