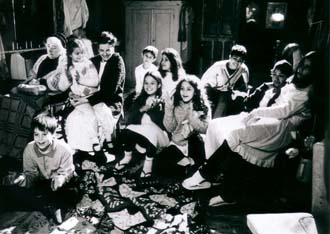 The Global Lens film series at Bates College concludes with Margarette’s Feast, a film from Brazilian director Renato Falcão. The film will be shown at 8 p.m. on Friday, Dec.11, and Sunday, Dec. 13, in the Olin Arts Center, Room 105, 75 Russell St.

Hosted by the Bates College Museum of Art, the series has been held on Fridays and Sundays throughout the fall. Admission is $5. For more information, please contact 207-786-6135 or this olinarts@bates.edu.

Made in 2002, Margarette’s Feast (90 min.) is a black-and-white silent film. It’s the story of a man named Pedro who, upon losing his job, comes across a magical suitcase that never runs out of money. This discovery sets Pedro off on a spending spree that culminates in a lavish birthday feast for his wife Margarette. The film is both a fantastical story and an exploration of the social conflicts of contemporary Brazil.

Learn more about Margarette’s Feast and the Global Lens series.