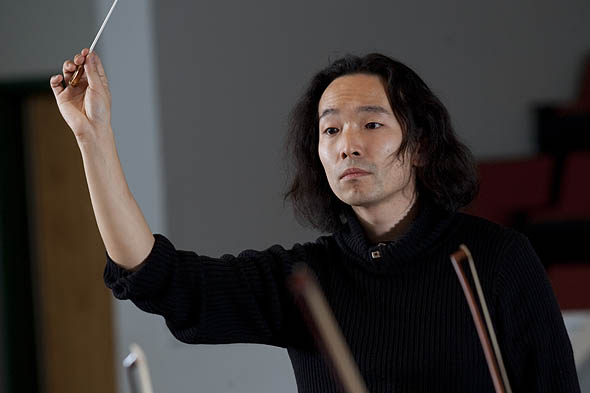 Hiroya Miura conducts the Bates College Orchestra in a 2006 rehearsal.

The orchestra, which will be conducted at Bates by Hiroya Miura and includes musicians from Bates and Bowdoin colleges, plays works by Bartok, Haydn and Mendelssohn at 7:30 p.m. Saturday, Nov. 12.

Both concerts are open to the public at no cost, but tickets are required. Please contact 207-786-6135 or olinarts@bates.edu. 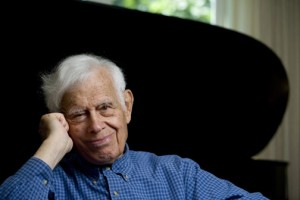 “The Haydn and Mendelssohn symphonies both have connections to London,” Hiroya explains. The 99th symphony is the seventh of the so-called “London Symphonies,” which Haydn wrote during his second visit to London where he was invited by the violinist and impresario Johann Peter Salomon to conduct large orchestras.

Mendelssohn’s ‘Italian’ symphony was commissioned by the London, now Royal, Philharmonic Society, which Salmon founded with a few other members 20 years prior. “Although the pieces by Haydn and Mendelssohn are 40 years apart, in my mind they both share the cosmopolitan flair that Europeans, especially Londoners, were enjoying at the time.”

Hiroya adds, “Bartok’s Romanian Folk Dances show yet another aspect of the European cosmopolitanism, although Bartok was much more invested in the local roots of Romanian, Hungarian and Bulgarian folk music.”

The 96-year-old Glazer, an internationally acclaimed pianist, has been an artist in residence at Bates since 1980. Here’s his program:

Berg’s Piano Sonata, Op. 1: Berg and Glazer were both students of Arnold Schoenberg, the composer who introduced the notion of atonality and the 12-tone approach to composition. Berg composed this early sonata, which is still tonal and rooted in traditional sonata form, while he was Schoenberg’s student.

Beethoven’s 15 Variations and Fugue in E Flat Major, Op. 35 (“Eroica” Variations): One of two theme-and-variations works that Beethoven considered substantial enough to assign opus numbers — works in which he elevated the form to a new level. This shares a melodic theme with three other compositions, including the “Eroica” Symphony, hence the nickname for this piece.

Brahms’ Theme and Variations from the String Sextet in B Flat Major, Op. 18: This arrangement for solo piano of the second movement of Brahms’s Op. 18 String Sextet, composed early in his career, was a gift for Clara Schumann, the widow of his friend Robert Schumann.

And three by Liszt:

Legende No. 1: Saint Francis Preaching to the Birds was inspired by St. Francis of Assisi’s well-known story in which he delivers a sermon to the birds.

Années de Pélerinage: Sonetta 104 del Petrarcha is one of a series of 26 piano pieces that Liszt composed over four decades, an autobiographical series inspired by the journey to maturity undertaken by Goethe’s fictional Wilhelm Meister.

The Rigoletto Paraphrase is based on a vocal quartet from the fourth act of Verdi’s opera by that name.