The demolition of Bates’ former boathouse is part of this week’s Campus Construction Update.

Campus Construction Update isn’t ready to surrender the hard hat and safety vest quite yet, but that day is coming soon. (The 8-foot ladder stays here!) 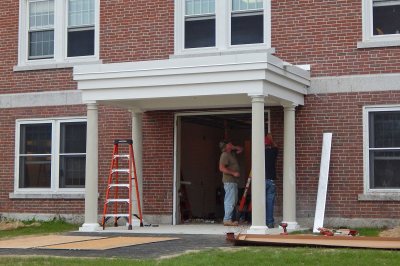 The four projects that we’ve been following since last spring (or, in the case of the Campus Life Project, since spring 2014) are all coming to fruition in the next few weeks — in time, naturally, for students’ arrival for the new academic year.

Two of the projects are athletic facilities. The new playing surface for the Campus Avenue Field, home of Bates field hockey, should be in place by Aug. 19. And Bates’ new boathouse, in Greene, is scheduled for completion by Sept. 2.

And two projects, involving four buildings in all, are residential. In one project, Smith and Wentworth Adams halls have been upgraded during the summer. The fourth, of course, is the brand-new Bates dorms at 55 and 65 Campus Ave., which we looked at last week. Students will begin moving into all four buildings on Aug. 19. 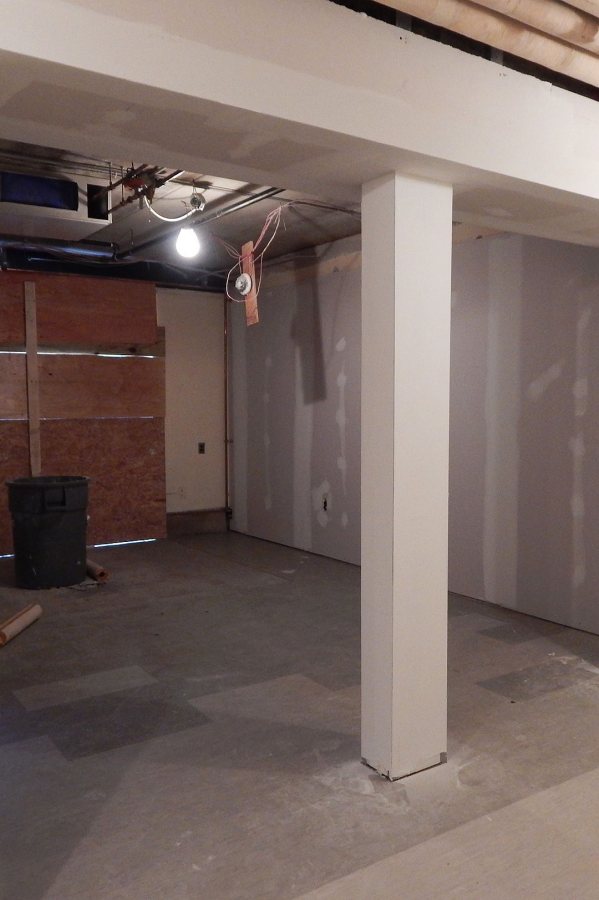 At Wentworth Adams, the excitement has focused on the lowest two stories. Being created on the ground floor are an entrance facilitating access to Lake Andrews; and a large study area supporting that floor’s new function as a first-year center. One flight up, a residence director’s apartment is taking the place of a student room.

Meanwhile, Aug. 9 was the date scheduled for substantial completion of the Smith work, which was building-wide. Substantial completion meant, among other things, that Bates folks could move freely in the building, giving project manager Paul Farnsworth and others 10 days to square things away before student occupancy.

Smith’s basement has been extensively reworked, including a reconfigured floor plan and new heating infrastructure. Above ground, a makeover of student living space addresses both deferred maintenance issues and a so-called de-densification that’s halving the number of beds to 96. The other 96 are shifting to the new Campus Avenue residences.

During an Aug. 2 tour of Smith with Farnsworth, things were hopping. Every building trade seemed to be represented, especially in the basement — carpenters, wallboard hangers, plumbers, HVAC technicians, security system technicians, tile installers, and electricians.

The new boiler, clad in a white metal cover, was commissioned Aug. 4, a daylong test that included firing up the unit and circulating hot water through the radiators. (The renovation included the relocation of certain hot-water pipes upward an entire floor, from the ceiling of the basement to the ceiling of the first floor. Moving the pipes allows more natural light into the basement.)

A different pipe job was also finished: extending the fire sprinkler pipes out to the middle of the student room ceilings. Formerly positioned near the walls, the sprinklers can now fully cover a room in the unlikely event of a fire. 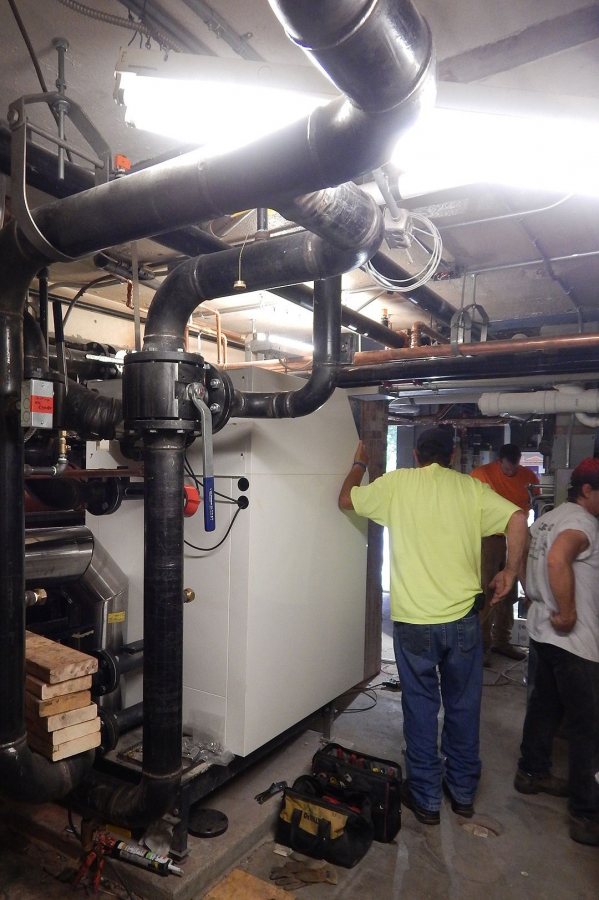 And another new system, the makeup air unit and heat exchanger that will serve Smith’s basement, introduced us to (yet another) building concept we’d never considered: makeup air. Makeup air? The possibilities were thought-provoking, but the story is really about energy efficiency.

Exhaust fans like bathroom ventilators and the new range hood in Smith’s basement kitchen reduce air pressure in a building. This “negative pressure” pulls unconditioned outside air inside — not a good thing in colder months.

So the makeup unit equalizes the pressure and, in cold weather, transfers heat from the exhaust air to the incoming air.

Upstairs, painting of the hallways was in progress, with a few bedroom walls still to be done. Bedroom flooring was in place and corridor carpeting was being laid even as we passed through. Farnsworth pointed out that the flooring subcontractor, Paul G. White Interior Solutions, worked six-day weeks and brought in installers from out of state to keep the project on track.

Finally in Smith, renovation of the 12 student bathrooms was nearly complete, incorporating new floor tiles and sinks; water-saving low-flow shower heads; and, for the first time in Smith, overhead lights in the toilet and shower stalls.

Next door at Wentworth Adams, progress was most apparent on the new entrance, with the wall opening covered in plywood while awaiting the door unit’s arrival on the 10th. But the canopy roof over the entryway was finished and the area around it landscaped, with an eye toward enabling a backyard social milieu.

In the vestibule, benches will encourage waiting for a friend, or enjoying the view even during inhospitable weather. A gas grill is on order, and Farnsworth is thinking about laying on a few Adirondack chairs.

Encouraging students to hang out together, he said, “is what this is all about.” 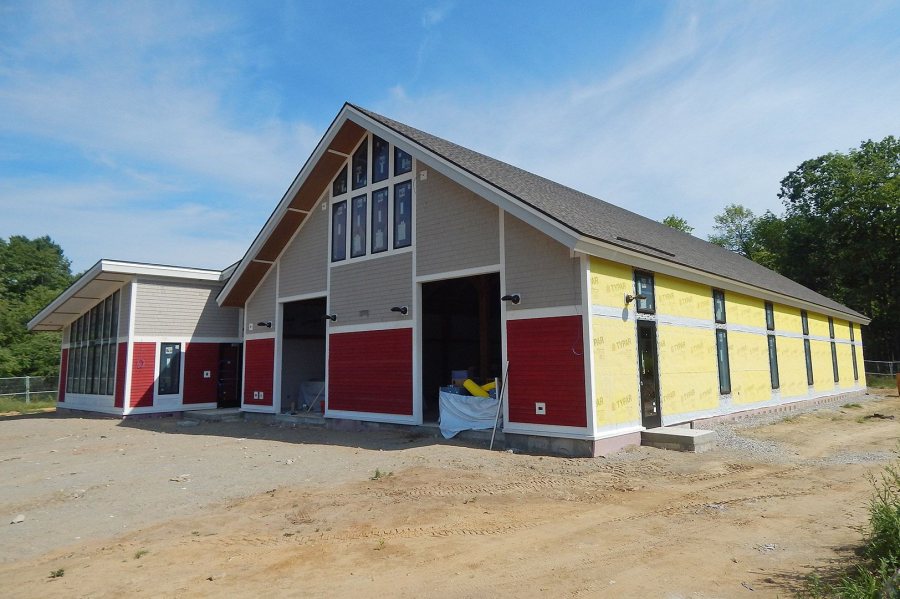 The exterior wall coverings were in place on the front of Bates’ new boathouse by late July 2016. (Doug Hubley/Bates College)

A Boathouse Raised, Another Razed: Granted that this series is dedicated to construction and not the opposite, we were nevertheless transfixed by the destruction of Bates’ former boathouse on July 28.

With its replacement going into service Sept. 1, time was up for the barn-like 1988 structure situated near the new facility on the Androscoggin River in Greene. 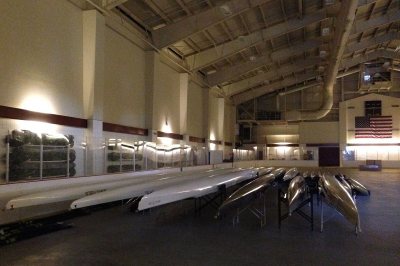 The Bates rowing fleet was stored at Underhill Arena while the college was between boathouses in July 2016. (Doug Hubley/Bates College)

Operating an excavator for Wayne, Maine, construction firm C.H. Stevenson, Walter Davenport was an artist at the controls of the John Deere 160D that knocked down the old house — or at least its wooden frame, since the wall planks had been removed previously for re-use in the new boathouse.

Davenport caressed the frame at each end of the building with the Deere’s metal claw. Then he softened up one side. Finally he drove around wiggling corner posts until the structure collapsed with a polite thump.

Rowing coach Peter Steenstra witnessed the razing. “I’m proud of what we did with so little,” he said, referring to shortcomings in the old boathouse that had emerged as the rowing program grew. “And now it’s amazing how so little can somehow seem like so much.”

Davenport and his Deere also put an end to a problem that cropped up at the start of the boathouse construction project, back in April: the discovery of rocks, really big rocks, that were in the way at the construction site.

Removing them intact would have been prohibitively expensive, says Bates project manager Henry Gillert. Incorporating them into the landscaping proved to be unworkable. But finally, Gillert says, a jackhammer mounted on an excavator’s boom — a so-called hoe ram — was used to break up the rocks, which Davenport loaded into dump trucks for disposal on the 28th. 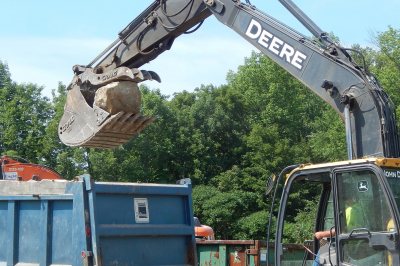 Walter Davenport and his Deere excavator load the broken-up remains of large rocks that had posed something of a problem on the site of Bates’ new boathouse. (Doug Hubley/Bates College)

“They were really hard rocks, and we weren’t sure we were going to be able to do it,” says Gillert, “but they did it in one day. It was a huge win to be able to get rid of those at a reasonable cost.”

At any rate, the new boathouse itself is right on schedule. Combining gray shingles, garnet clapboards, and white trim, much of the exterior wall covering is in place. The windows are finished. This week, plumbers and electricians have been doing terminal installations, e.g., faucets and light switches, and tiling experts are on task in locker rooms and bathrooms.

Those wall planks from the old boathouse, freshly planed and finished, will be fitted as corridor wainscoting and ceiling accents starting next week. A key feature, the slick telescoping Focus Rack Systems boat racks, will arrive the week of the 22nd. 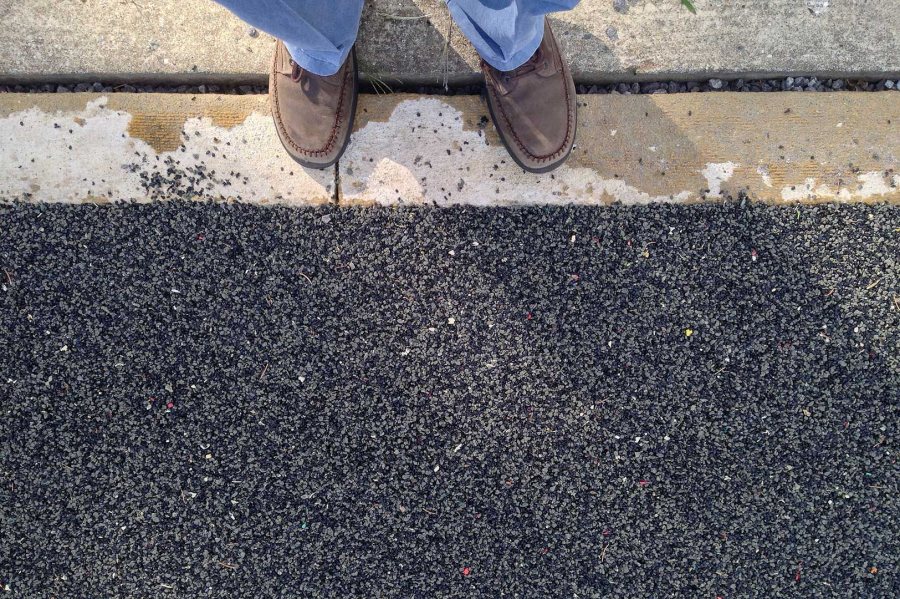 All Mixed Up: Finally on the athletics front, replacement of the Campus Avenue Field playing surface has resumed after a delay related in part to equipment troubles.

The new turf, a highly regarded Dutch product called GreenFields TX, has two layers: a carpet of high-tech faux grass on top, and a shock-absorbent base that’s known generically as the elastic layer or e-layer, and in GreenFields parlance as the Ecocept layer, made by the Dutch firm TenCate.

It consists of recycled rubber crumbs and chipped-up plastic bottles that are mixed with polyurethane glue right on site just prior to placement. 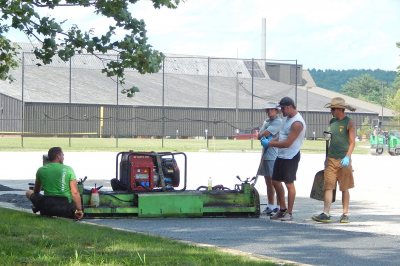 That Ecocept layer was supposed to go down the third week of July. But the mixing machine that project contractor NET Sports Group of Saco, Maine, brought up from Texas was not performing to the satisfaction of the GreenFields supervisor on the scene. So NET bought a new mixer from Germany.

Because irregularities in the Ecocept are transmitted to the playing surface, Gillert explains, the quality of that layer is critical to the playability of the field. Indeed, the NET Sports crew is so meticulous about laying the stuff that watching them work is like watching paint dry.

“Our main objective is to get it in right, because we’re going to live with that field for 20 years,” Gillert says.

Thanks to the new mixer, the Ecocept was successfully placed this week and the grassy GreenFields carpet is scheduled to arrive Aug. 12.

Can we talk? Campus Construction Update welcomes queries and comments about current, past, and future construction at Bates. Write to dhubley@bates.edu, putting “Campus Construction” or “Makeup air? Is that like makeup … never mind” in the subject line. Or use the comments system below.